If you can’t remove the room with a view, build anew.

A thriving neighborhood in the nation’s (and one of the world’s) most densely populated cities should yield great promise. This is New York City we’re talking about, and, in any given hour, at just about every intersection, hundreds—even thousands—of people walk or drive by. And the high concentration of rooftops, housing units, office leases, and retailers within an eighth-of-a-mile radius would suggest that a developer could construct just about anything, and it would find tenants in seconds flat. Even better when it’s a street corner. So what on earth can explain the real estate stalemate in the heart of Midtown Manhattan, in the Garment District, just a few blocks from Times Square? 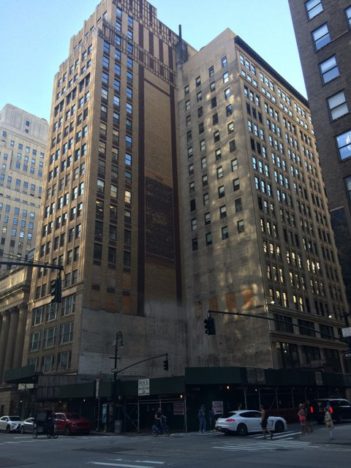 It might not look like anything remarkable, and that’s exactly the problem. It’s a vacant corner flanked by two other buildings, and it’s just languishing in a state of aborted construction. No promotional renderings, no “coming soon”, not even a sign indicating the land is for sale. Granted, it’s not big: a rough estimate using the scale bar of an aerial photograph suggests it is barely 50 feet by 80 feet—possibly less. But it’s the corner of West 37th Street and Sixth Avenue, and Midtown’s land values would suggest this is still a promising parcel for some new development.

Surprisingly, history indicates otherwise. Here it is in June 2011, when it featured a squat row of micro-retailers, but nothing beyond a first floor. No doubt some speculator saw this was not a particularly lucrative use of the land and chose to build upward. By summer of 2014, a developer had demolished the single-story retail, and by September 2016, this developer had placed the floor plates for what appear to be a five-story structure. Yet here we are in August of 2018, and it looks like it’s back to square one: nothing standing on this corner all.

A little history dig is all it takes to patch together a reasonable narrative. The parcel languished for most of the decade, until the aforementioned hotel developer made an effort for what appeared to be a five-story edifice around 2014. The project never took off, and the aborted project sat in limbo for at least four years, until a new developer demolished it less than a year ago. But even before then, the parcel had stood for who knows how many years as a forlorn row of cheap shops, even when everything around it stretched at least 16 stories. So the question lingers: how did one of the hottest real estate markets witness a corner parcel remain either vacant or underutilized for so long?

Let’s take a look at the street level once more: 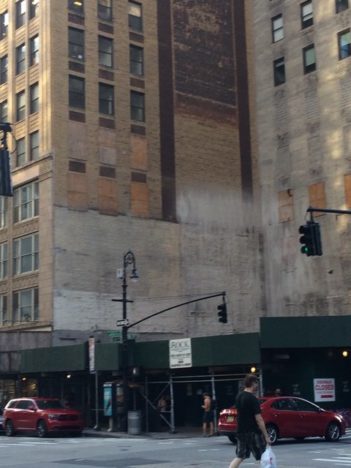 Notice the “scarring” on the two adjacent buildings, where discoloration reveals two things: where a smaller building once stood, and where certain side windows got bricked over. One can presume, based on this retroactive patchwork, that the sequencing of these buildings posed a problem spread across multiple development intervals and competing ownership. Everybody wanted to maximize the floor-area ratio: building tall optimizes the profitability of extremely expensive land, and the demand in the Garment District is great enough to prompt any developer to go as high as zoning and air rights might allow. Yet the side windows face a challenge; how can a developer build much more than five stories without encroaching on the property rights of the neighbors? And, given the cost of the land, how can a developer expect a return on the investment if the neighboring windows inhibit the edifice from rising more than five stories?

I have no doubt I’m simplifying the different forces at play here, but it’s easy to see why my epithet “real estate stalemate” seems increasingly appropriate. As much as a developer in a high-density environment would like to build to the edge of the lot lines, he or she will inevitably encounter remonstrators in the neighboring buildings, who don’t want their windows bricked over. As for the neighbors, while they don’t own a right to views, zoning regulations and building covenants typically ensure that they won’t be completely deprived of light and air through adjacent construction.   Judging from the bricked windows on the fourth and fifth floors (and even sixth floor on the building to the right), these structures preceded the corner development in a previous era, and the developer reached a compromise with the neighbors by only blocking their view up to a certain point. That structure—the one that prompted the initial discolorations—came down many years ago for an unambitious row of single-story retail. By the 2000s, real estate interests had high enough aspirations for the site, but a mere six stories would make it difficult—maybe impossible—to achieve profitability. Competing interests effectively stymie development at this site, leaving it to languish.

Finally, in the last year, a new opportunity has emerged. The team of Isaac Chetrit and Ray Yadidi hired internationally renowned architecture firm Kohn Pedersen Fox to design an 80-story tower, most likely combining retail, office, apartments, and possibly a hotel on that skinny little parcel that they purchased in 2015. Within a few months of the announcement, they had knocked down the five-story dud. And, later this year, they officially integrated the adjacent 21-story building (to the left in each of my photos) into their vision. Though they purchased this handsome building over a decade ago, only this year did they announce plans to let the remaining office leases expire through 2020, then demolish it and integrate it into their supertall development.

Our developers found a solution to deal with the exposed windows that look onto that corner parcel: eliminate them altogether. In most cities, the demolition of a building over 20 floors would give the greater community serious pause, but it does not appear to be ruffling too many feathers in Midtown Manhattan, where similarly sized buildings abound. Since the office building at 989-991 Sixth Avenue is hardly dilapidated, it’s certainly not an optimal approach from the angle of either historic preservation or conservation of viable building materials. But real estate interests prevail, and, operating under the mentality of “we’ve got to destroy this village in order to save it”, it’s amazing the lengths some deep-pocketed investors will go to maximize the opportunity of a lucrative corner parcel. This strategy will allow the new building to orient itself more powerfully along Sixth Avenue—by far the more valuable of the two street frontages—and it could permit enough light and air to the other remaining structure (to the right in my photo) so that those side windows don’t get completely squandered. A narrow corridor might be the solution, or—more likely (and more strategic)—an atrium with a skylight at the top, allowing a sheltered entrance that still promotes plenty of natural light to reach those windows with the side view. I blogged about this second approach used to salvage side windows on the newly constructed Marietta Building in downtown Indianapolis. Either way, the stalemate comes to an end, and it doesn’t take a few hundred new bricks to patch our way to a solution. Instead, it takes a few million

2 thoughts on “If you can’t remove the room with a view, build anew.”