Brutalist behemoths in a friendly mountain town: will Asheville salvage the seventies?

For those who haven’t been there, my words can at least serve as a testimony to the vibrance of Asheville, North Carolina. The heart of the city, along Patton Avenue near the triangular Pritchard Park, is teeming with local establishments, resulting in sidewalks packed with visitors from mid-morning until late at night. The older, less aesthetically distinct industrial quarter just south of downtown now harbors a variety of local breweries and specialty artisan shops. The streetcar-oriented, formerly working class West Asheville extends the entrepreneurial spirit of downtown along a generally walkable arterial. Best of all, this urbanizing alchemy seems to have happened almost completely organically. While I’m sure local business and civic leaders did their best to foster a community that attracts tourists and new niche industries in equal measure, much of it happened gradually, over twenty to thirty ears. And most of it took place through the revitalization of finely wrought existing buildings; only in the last decade did new development kick into high gear. The combination of the Biltmore Estate’s intrigue with the beauty of the surrounding Blue Ridge Mountains elevated this mid-sized mill town into major hub for outdoor exploration, with plenty of evening leisure activities packed into the town center, not all of them oriented around beer. (But an awful lot are.)

And I can only hope that my flattering words will suffice, because, like my previous feature on the awkwardly situated new Hilton Aloft hotel, this article confronts us with some architectural letdowns. 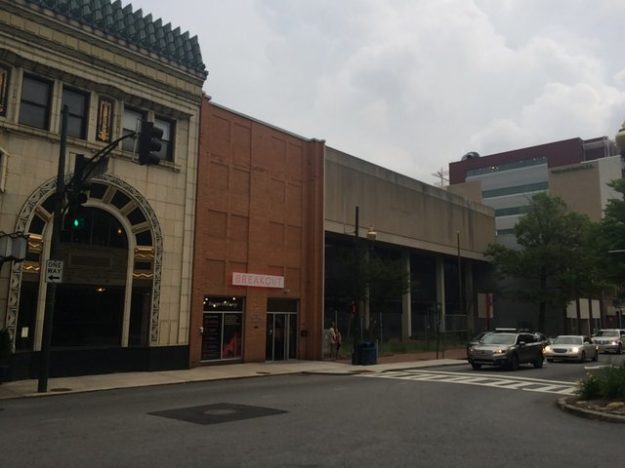 The nondescript structure with “Breakout” over its doorway may seem like the centerpiece to this photo, but the buildings that flank it are far more interesting. Notice the elaborate, ornate façade on the building to the left. 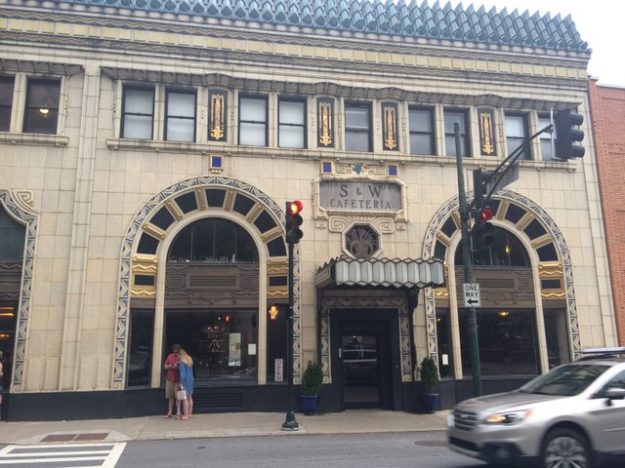 I’m going to go out on a limb and suggest this is indicative of the Spanish Mission Revival style that flourished alongside Art Deco, at least until someone better-versed than me can step up with a correction. Ninety years after construction (give or take), the S&W building remains a cherished feature of downtown Asheville. Now let’s look at the structure to the right of “Breakout”. 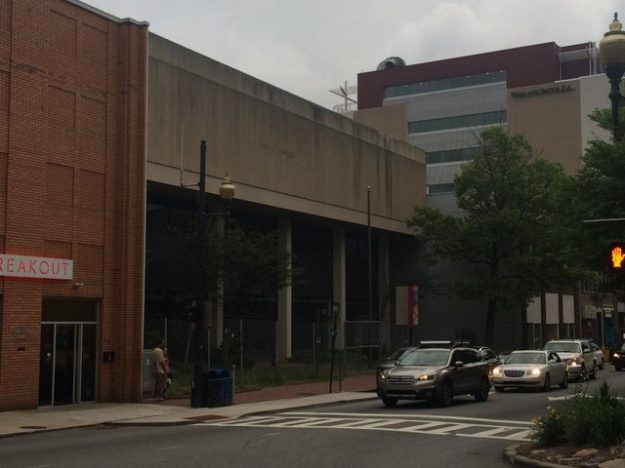 Formerly the site of a Bank of America branch (still operating as of 2012 according to Google Street View), the building seems to have endured a mixed reputation throughout the years: the courtyard created by the street setback apparently used to host drum circles and homeless overnight squatting (possibly a Venn diagram with some serious overlap). 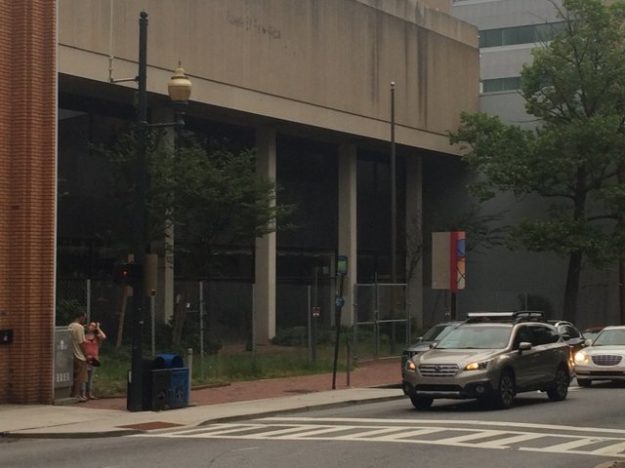 Vacant and fenced in, this structure is quite the eyesore in the context of just about everything else along the Patton Avenue corridor. Given the state of Asheville’s economy, though, it should come as no surprise that a Charlotte-based developer plans to renovate the property extensively into a new hotel, most likely adding a few floors and eliminating the plaza entry by building out to the lot line.

Incidentally, this isn’t the only austere concrete structure fronting Asheville’s lush centerpiece. Here’s a view of Prichard Park from an opposite corner. 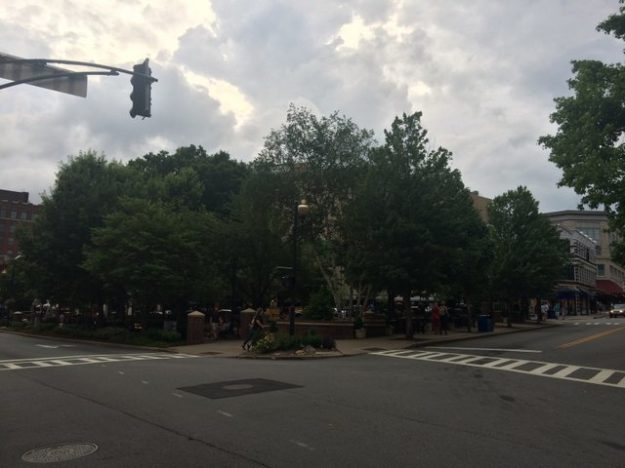 And here it is from another street corner. 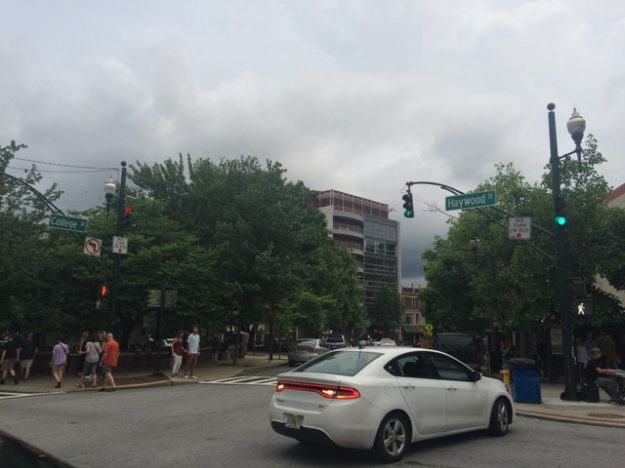 And, after pivoting the left, the visitor gets this lovely view. 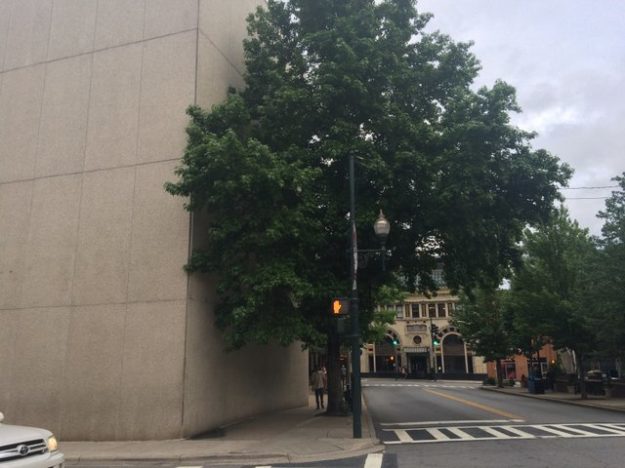 This windowless monstrosity spans the entire block from which I took those two previous photos of Prichard Park. Unfortunately, I failed to get a pic of the structure head-on, but this Google Street View reveals that it’s a large Wells Fargo Bank branch. And unlike the Bank of America a few hundred feet away, the Wells Fargo remains fully operative. In many respects, this building is an even bigger blight to Asheville’s otherwise visually stimulating downtown streetscape. Here’s the side of the Wells Fargo Building. 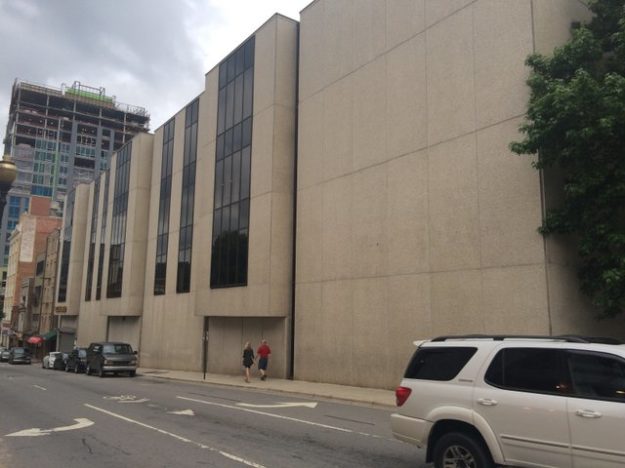 Nothing but a huge blank wall for pedestrians to gaze upon. And compare that with a different corner facing Prichard Park. 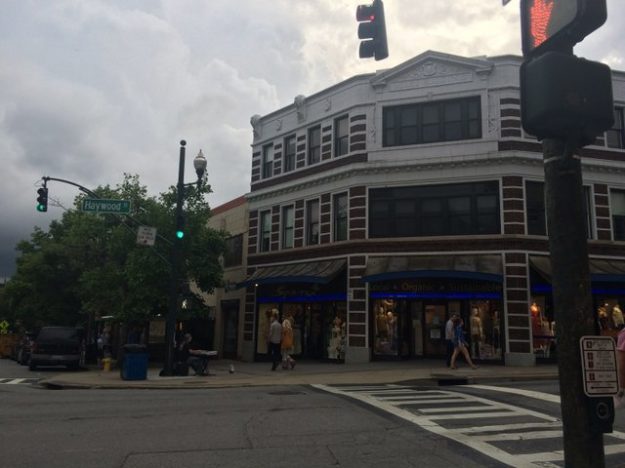 These two banks—former and current—share both an architectural progenitor and an entire design philosophy reflective of their time period of construction. Unlike with my Spanish Mission Revival guesstimate, I can confidently assert that both banks owe their existence to the Brutalist movement that flourished in the middle of the 19th century. Although the earliest pioneers for this movement began in the early 1950s, it didn’t achieve widespread recognition until the late 1960s, reaching a peak around 1970, a period when virtually every major American university bestowed a Brutalist edifice onto its campus (most frequently a library or admin building). Public reception to this style, always somewhat chilly, helped contribute to its quick decline by 1975, a phenomenon that the 1970s energy crises no doubt helped to exacerbate. (Hulking Brutalist structures are notoriously costly to heat and cool.) By the late 1970s, the expansive concrete façades found a successor in slightly more inviting masonry, while continuing to mimic Brutalism’s unconventional massing and fenestration, at least for a few more years.

While most architectural movements, like all trends, experience a backlash that speeds the movement’s retreat, they also typically enjoy a renewed appreciation about two decades later, due largely by nostalgia’s capacity to spur a cyclical temporal form to collective popular taste. Alas, Brutalism has generally struggled to catch on. Concrete’s tendency to deteriorate—particularly the spalling that occurs in moist climates with four seasons like Asheville’s—creates both an aesthetic and structural predicament for the owners of Brutalist structures. But, more importantly from the standard of a civic node like Prichard Park, the majority of Brutalist buildings are intrinsically inhospitable to pedestrian engagement. They have few windows—further amplifying energy costs, since they need far more artificial lighting—and they look like fortresses, which confers no benefit to urban areas seeking to attract people and new businesses. The anti-Brutalist movement is so intense that many prominent structures have faced the wrecking ball in the last decade, and others are threatened. Even those Brutalist buildings that remain in good condition and offer an unquestionably distinct physical presence still arouse more detractors than cheerleaders.

Certain academic circles and specialty journals have rallied behind the finest Brutalist structures in an attempt to save them, but it’s a very tough sell. These two examples in Asheville offer all the evidence necessary through a handful of photos. The Bank of America building will almost certainly be unrecognizable after redevelopment, if the investor doesn’t ultimately decide to demolish altogether. The building remains difficult to repurpose within its current façade, at a time when a continuous street wall is more appealing than setbacks. It’s a bit unfortunate, because, as Brutalist buildings go, it’s less adversarial to the streetscape than most. The very presence of a green courtyard and first-floor windows certainly distinguish it from the overtly hostile Wells Fargo building nearby, which will likely remain for the foreseeable future.

The broadly disliked aesthetics of Brutalism beg a question: what made architects of the time think that concrete citadels would represent modernity? It may have been an unconscious gesture, but it is essential to recognize the sociological conditions that prompted this design. In the late 60s and 1970s, old urban centers were plummeting in their appeal, losing out to new development in the suburbs and engulfed in poverty and crime. Many Brutalist architects eschewed first-floor windows because they became points of vulnerability within their hostile surroundings. Though Asheville was probably never a criminal hotbed, it certainly suffered the economic malaise that made its downtown unappealing compared to the safer purlieus. A number of structures built in the 1970s, Brutalist and otherwise, deploy a massing that makes them visibly defensible space—a feature no doubt more attractive to banks than other tenants.

My suspicion is that Asheville will continue its rapid-growth trajectory. In due time, real estate interests will eye the lucrative parcel for the Wells Fargo Building and it will face the same redevelopment. And most residents in Asheville will hardly bat an eyelash at the thought of this concrete monster coming down. In fact, it may take many more demolitions before the general public gets jolted into panic mode about the endangered future of Brutalism: but those Americans who are nostalgic for the design need only venture over to their nation’s capital. They’ve got a little subway system based almost entirely on the fundamentals of Brutalism, and it’s not going anywhere. Literally.

PrevSkid Row in Delaware: if it can claim The First State, it can claim them all.
Littoral lessons at the Delaware beach.Next

19 thoughts on “Brutalist behemoths in a friendly mountain town: will Asheville salvage the seventies?”