Coffee shops have morphed into an omnipresent urban gathering place. Why not tea?

Barracks Row, a small but generally prosperous commercial corridor in the southeastern Washington DC neighborhood of Capitol Hill, hosted a location of the regional chain Capital Teas—at least until last year. Just weeks after I made a sizable purchase at the location, at a time when I had no idea that it was struggling, the branch closed. As the Prince of Petworth link above indicates, the tea shop’s corporate offices provided a response that was both canned and candid: “We recently decided to close our Barracks Row store, as though we enjoyed the location very much, it was not financially viable for us to remain open there.”

Well, okay. Not financially viable. If we visit at the wrong time, we can kind of get their point. 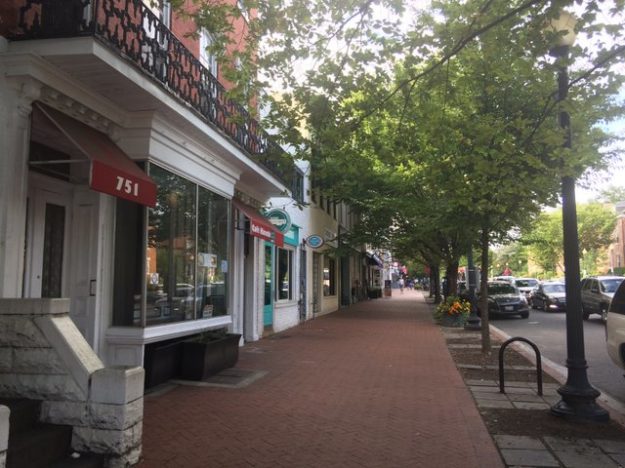 But the storefronts themselves seem mostly occupied. The brick sidewalk is impeccable, and the scale of the two-lane street (with two additional lanes for on-street parking) is optimal for encouraging pedestrians to stroll at a leisurely place. And, if we arrive on Barracks Row as dinnertime is kicking into high gear, it feels like a pretty lively place. 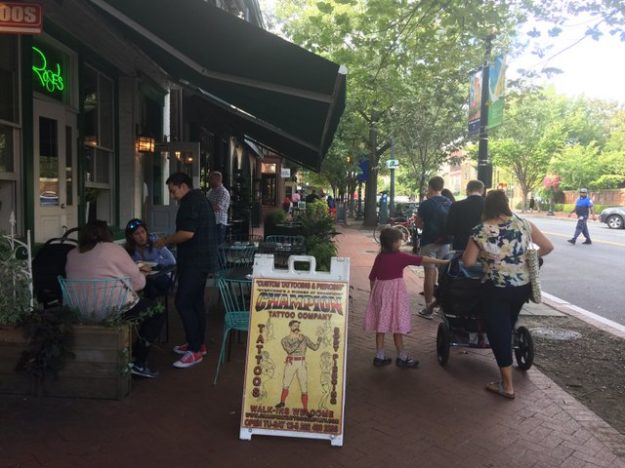 As any resident of the district will tell you, Capitol Hill is hardly a struggling area. Far removed from DC’s nadir in the late 80s, when most of the area was engulfed in the crack epidemic, these days the typical rowhome—the more modest ones—will cost the buyer a good $800K for starters.

By almost all metrics, the three blocks of Barracks Row are doing pretty well. Yet somehow, Capital Teas didn’t make it at the location below. 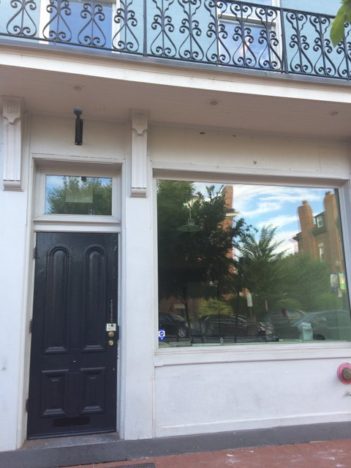 It certainly doesn’t appear to be in an area starved of pedestrians. 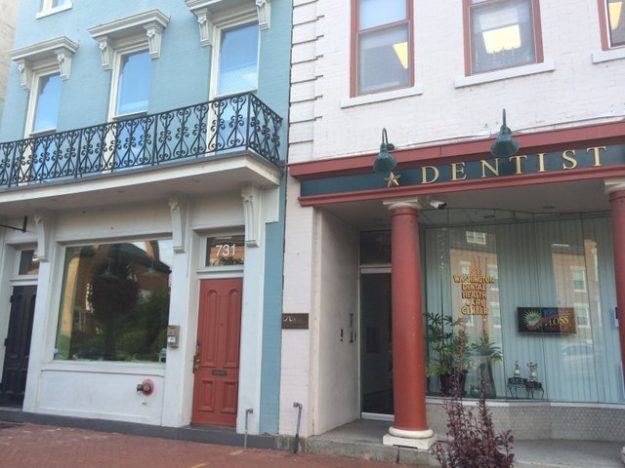 The dentist’s office next door probably depends quite a bit less on foot traffic, but then, as I’ve blogged about in the past, the white-collar, service oriented businesses (medical, insurance, accounting, law) don’t really rely on passers-by to ding the bell when they step through that doorway. A dentist’s office, an architecture firm, and a clinical psychologist rarely if ever need a prominent street-level window to host a big, eye-catching display. As evidenced by the storefront on the right, it’s far more likely that service-oriented jobs will keep their blinds pulled most of the day. Nothing to look at here. That dentist might as well take up the second floor of the building.

Conversely, Capital Teas couldn’t achieve what it needed to on this three-block stretch of 8th Street, despite being in an affluent, densely populated area (over 15,000 people per square mile) and in a well preserved 19th century building. The area had so many winning ingredients for retail, but no dice. In fact, Capital Teas had to scale back its real estate portfolio considerably in 2017. Here’s what it offers today, in July 2018: six locations, all in the greater DC/Baltimore area. But look at the map at the top of the screen, with the teapot icons. It shows locations in Florida, but that doesn’t line up with the addresses listed. In fact, the company has not yet fully eliminated one of its old URLs, which shows the locations in mid-year 2017, before the Barracks Row branch closed. Back then, it had offerings not just in Florida, but New Jersey, Delaware, all the way to metro Philadelphia and Pittsburgh, and even a Colorado branch. And the DC metro had many additional locations as well.

In short, Capital Teas has scaled back about two-thirds of its locations and appears in the process of a rebranding. Notice the serif font above the doorways on all the photos of various locations, and compare that with the lower-case cursive in the upper-left corner. It seems to be undergoing a radical change to consolidate efforts at the most profitable locations—exactly what any retailer should do when it has stretched itself too thinly.

I don’t intend to make light of the challenging environment in which this company is navigating, nor do I want to amplify its setbacks. My own experiences at Capital Teas have been positive—including the now-shuttered location in the photos above—and I hope it finds its way amidst a punishing landscape. No doubt the married couple that runs the biz made some of these 2017 closure decisions in full awareness of the contraction of its high-profile competition: in the late summer last year, Starbucks announced that it was closing all 379 of its Teavana stores, based overwhelmingly in malls. By the beginning of 2018, Starbucks had reached a settlement with mall manager Simon Property Group, allowing the coffee giant to close all Teavana locations. This decision could augur well for other large tea retailing chains, but one of the biggest—DavidsTEA out of Toronto—also began scaling back its plans and closing locations in 2017, despite welcoming the news of the demise of its biggest competition.

The problem isn’t Capital Teas. It’s tea in general. Or, better yet, it’s another example of the failure of retail, and tea remains primarily a durable good, bought and sold over a counter. Unlike coffee, tea has not yet holistically elevated itself to a social experience, at least in North America. And all three of the aforementioned companies treated their product primarily as retail, rather than encouraging people to sit and consume their teas while surfing the web on their phone or chatting with a friend. 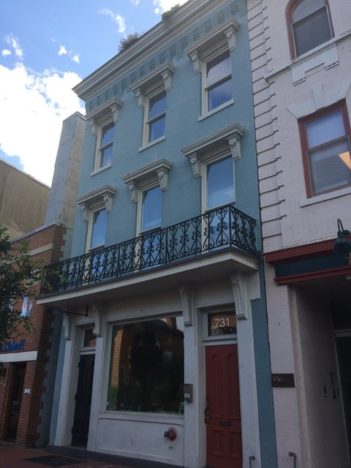 In Capital Tea’s defense, the business modeled their Barracks Row location much more like a tea room than simply a tea store: immediately within the storefront window were shelves of tins filled with their greens, whites, blacks, oolongs, and pu-erhs. And then, in the back of that room, a pathway led to a small courtyard where people could sit and sip away. The Barracks Row Capital Tea offered a few packaged candies and dried fruits/nuts to munch on. But it did not have a kitchen and served nothing else—not even the fresh pastries or bagels that are a staple at most coffee houses. While the tea room was a thoughtful touch, it wasn’t a reason for being, and I suspect it received very little use. It also remained largely out of sight to people visiting the tea store up front, and the salesperson only offered one or two conventional ways of steeping the tea. Contrast this with the single location of Tea’s Me (open for at least a decade) or the brilliantly named HoiTea ToiTea in my hometown, both of which seem to be doing solid business. But they are tea vendors and cafés with a full menu; they encourage people to linger and socialize. It’s an entirely different concept from Capital Teas, Teavana, and DavidsTEA. Like their DC counterpart Teaism, these punny businesses are restaurants with a full tea shop.

The winsome little storefront in Barracks Row has remained vacant or underutilized for the last year. With each month, it’s getting harder to find tenants that can fill this space—certainly the number of viable retailers is dwindling. More and more, conventional retailers are having to endow their store locations with something experiential: running shoe stores host regular running clubs, bookstores have to keep an active calendar of guest lectures and open mics, and clothing stores? Well, I’m not sure what they can do. Five years ago, I voiced my frustration about how service-oriented businesses like lawyers and accountants were taking prime retail and storefront space in our urban corridors. Now I realize that property managers have to lease to whoever they can find. Sure, dentist offices like the one next to the old Capital Teas don’t add much to the character and vibrancy of a historic shopping district like Barracks Row. But they do one thing that makes them a godsend: they stay in business. And you can’t order a root canal on Amazon.

PrevAs the airline industry retracts, keeping the airports busy is anything but child’s play.
The restaurant scene of Columbia Heights: in here, it’s always Tuesday.Next

16 thoughts on “Coffee shops have morphed into an omnipresent urban gathering place. Why not tea?”