Petersburg, Virginia: will small cities ever get the same infill as the big kids?

Most cities over a certain population—say 100,000—are enjoying renewed curiosity in their historic downtowns, enough to spawn not just an array of restaurants and bars and (for the lucky few) a handful of flourishing retail establishments, but to attract a solid residential component that helps galvanize even more restaurants. And in quite a few of these six-digit cities, the residential demand is great enough to prompt outright new construction, rather than mere redevelopment of existing buildings. Since the year 2000, many American cities have witnessed more new construction than they had in the previous half century.

A handful of cities below the 100,000-person level are enjoying some of this same curiosity; Asheville, North Carolina immediately comes to mind. But most of the smaller cities have not yet welcomed the construction cranes in any real quantity. As for the small cities or towns, they too might enjoy some visible invigoration of their historic centers, but only a few are greeting new infill development altogether.

But that doesn’t mean those vacant lots are sitting fallow. Petersburg, Virginia (population 32,000) offers one example of how to animate underutilized urban land. 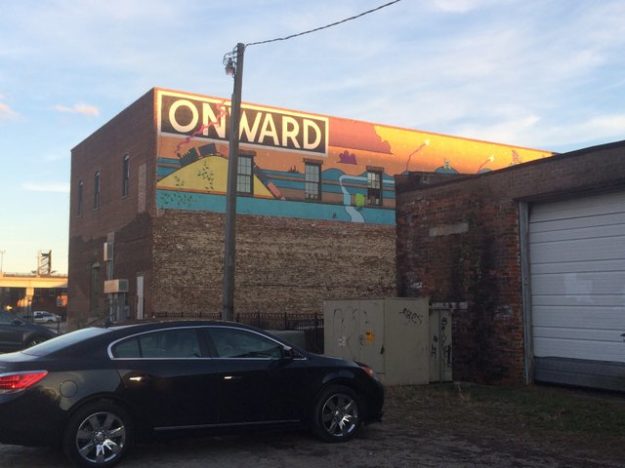 I think I can safely assert that most people outside of the Mid-Atlantic (possibly most outside of Virginia) aren’t familiar with this small city about 20 miles south of Richmond. Its location on the Appomattox River made it critical as a logistical and defensive hub relatively early in the colonial period; the commonwealth’s General Assembly incorporated the city a quarter-century before the Revolutionary War. The advent of the railway didn’t eclipse Petersburg; both lateral and longitudinal rail lines helped elevate the city into a critical transfer point, linking it particularly effectively between the larger populations in nearby Richmond and in Norfolk, 75 miles to the southeast. The presence of Fort Lee to the immediate east reaffirms Petersburg’s location as a host for prominent military engagements during both the Revolutionary and Civil War, though, long before the 1865 Emancipation, the city hosted numerous free negroes, and the prevailing anti-slavery undercurrent in Petersburg made it an exception to much of surrounding Virginia, to the extent that it served as a prominent stop on the Underground Railroad.

A century later, Petersburg faced challenges that, up to the present, betrayed its antebellum prosperity. Though a major site for black legislators during Reconstruction, the city remained steeped in Jim Crow-induced segregation up through the 1960s. And it never could easily compete with neighboring Richmond. The closure of tobacco factories in the 1980s spurred a steady job loss that has resulted in about 25% fewer people in the city today than in its 1980 peak. And it shows through a large but overwhelmingly underutilized downtown.

While the economic misfortunes of Petersburg are obvious to the untrained eye, equally prominent is the high concentration of sturdy, mid-19th century industrial and commercial architecture. The city has good bones. 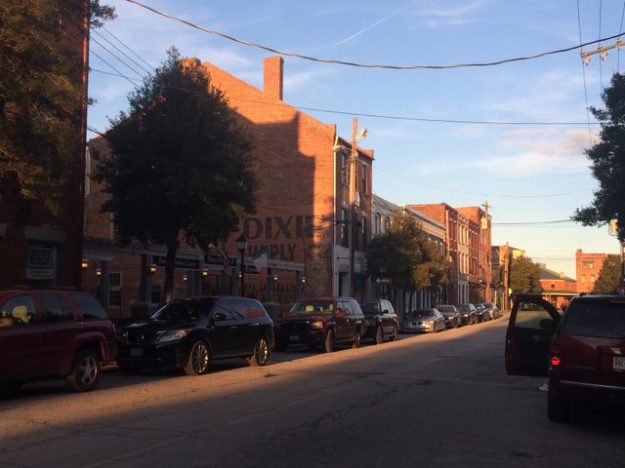 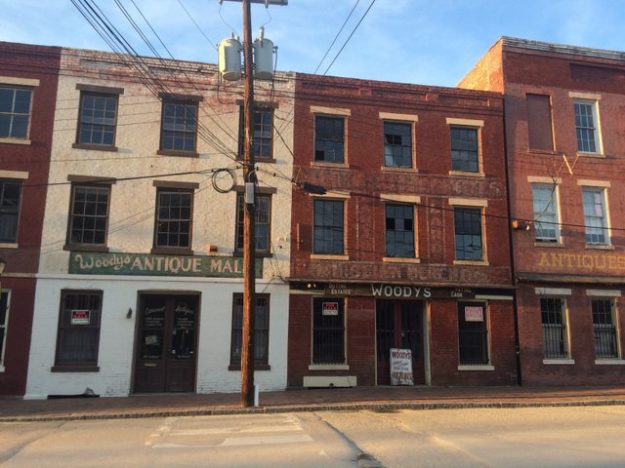 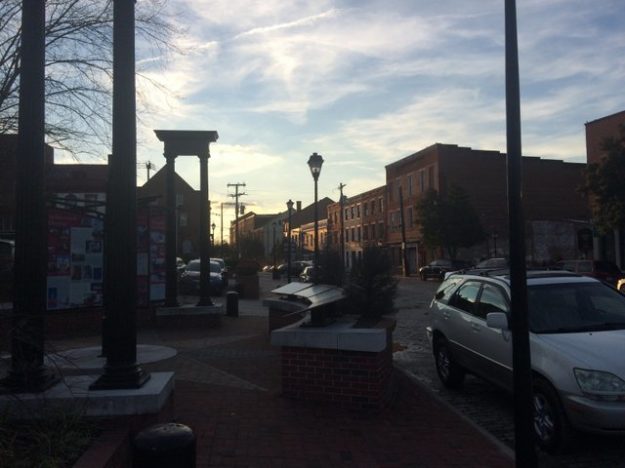 And it is because of these good bones that the city is enjoying the earliest indicators of a resurgence, at least in its downtown, through a variety of niche restaurants, breweries, coffee roasters, and distilleries that, I suspect, have bolstered their brand through the beloved word “artisan”. 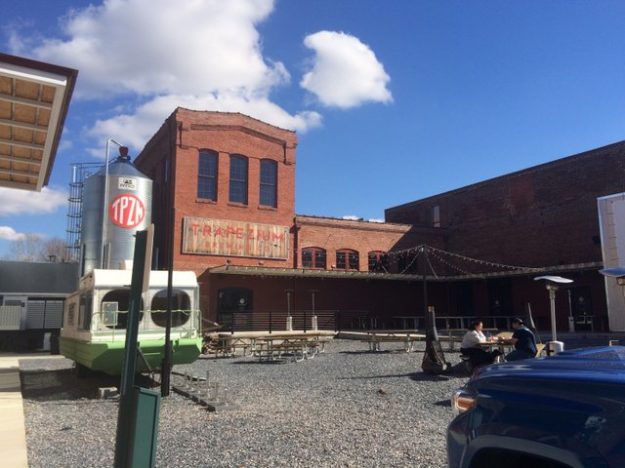 Though it’s become almost cliché, it remains a smart move: locate those microbreweries in cheap, old real estate in a walkable environment, just as I noted in a town much smaller than Petersburg last week. If the product and overall experience is good enough, a place like Trapezium Brewing Company will still distinguish itself, even if the idea of a downtown microbrewery is hardly novel in 2018.

But the questions remain what a still economically distressed small city like Petersburg can do not with the buildings themselves, but in the spaces where the buildings used to be. 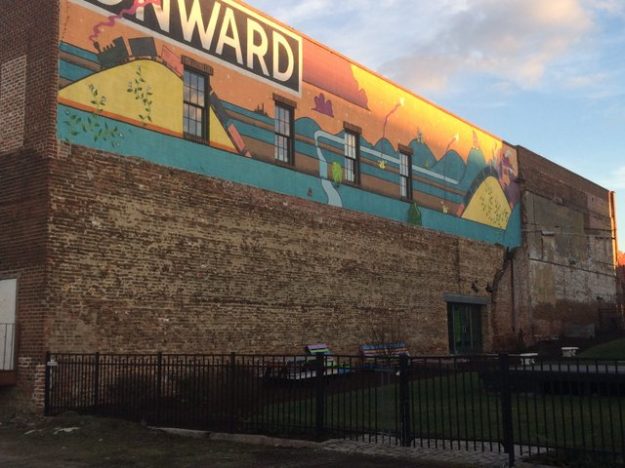 It’s clear that the “ONWARD” mural presides over a vacant lot where a building once stood. Just look at that vast and mostly blank space: it served as a party wall to the adjacent structure. Never once did the architect intend for this wall to stand exposed to the sunlight and outdoor air. The devastation wracked about our historic urban centers through middle 20th century disinvestment resulted in numerous exposed blank walls. Some cities have attempted to add color and texture through murals like the one here in Petersburg; the City of Philadelphia has a widely regarded Mural Arts Program that I have explored on multiple previous occasions (as well as some of the less polished knock-offs). But the mural hardly serves as the true activity node at this space in Petersburg. 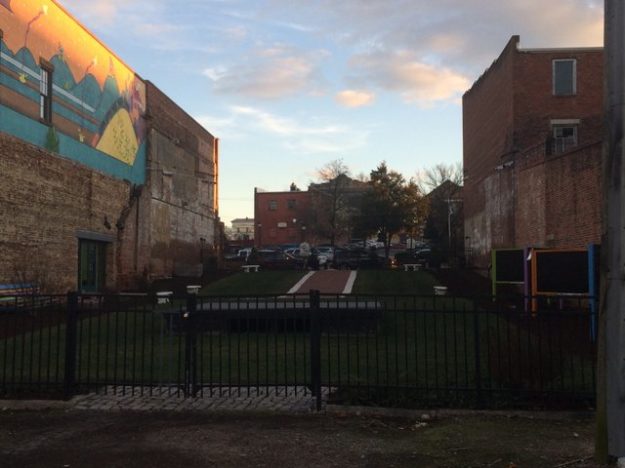 Not surprisingly, the vacant lot sits between two buildings, as evidenced by the equally blank party wall on the right. It was part of a row, and based on the typical width of 19th century structures in a city as old as Petersburg, we are probably gazing upon a site where two—possibly even three—commercial buildings once stood. But, instead of letting the space devolve into a weed-filled patch of grass, someone has invested enough to transform it into an interactive pocket park. The park features garden furniture, a cupboard for exchanging books, chalkboards, and even a tiny performance stage, amidst impeccably maintained landscaping. In all respects, it’s a vast improvement over the uninspired patch of grass that comprised the parcel back in 2012.

I find no evidence that the City of Petersburg includes this parcel, wedged between Pike Street and Old Street, in its portfolio of parklands, so my suspicion is that it’s a purely private initiative. Perhaps the owner of one of the two adjacent buildings also owns this land and decided an investment would bolster the aggregate worth of the entire historic row of buildings. Perhaps a local civic association like Historic Petersburg Foundation, Inc. is funding it. Not sure it matters, because, for the time being, it serves as a de facto placeholder that activates an otherwise moribund parcel, in a long neglected city that is assessing its architectural assets in an attempt at alchemy.

Like the smaller city of Greencastle, Indiana (which I covered many years ago), downtown boosterism has helped spur the early vestiges of revitalization. This culture of advocacy has found a way to capitalize upon the revival with new civic space, which, whether or not the demand exists, certainly looks better than asphalt or an unused lawn. My suspicion is that Petersburg is on a trajectory where it could soon enjoy a full-fledged, visibly revitalized downtown. But the revitalization may not ever fully diversify: I’m not sure if a downtown of restaurants, breweries and maybe even some tourist-oriented tchotchke shops will be enough to convince people to move here; after all, much of outlying Petersburg remains quite distressed, the public services are inevitably subpar compared to neighboring municipalities, and major employers like neighboring Fort Lee provide billeting on site. So, even if Petersburg experiences the renaissance it deserves, it may be decades before a developer decides to rebuild on this vacant lot…if at all. My only fear is that, if Petersburg becomes a legitimate attraction and spot for recreational drinks/eats, the perception of a parking shortage could emerge, resulting in the parcel’s owner deciding to convert this bit of greenery into a paved lot. And, from a market perspective, it would be a shrewd option: off-street parking typically yields more money than civic space. But the greenery of a pocket park is far more likely to bloom into long-term, actionable reinvestment. And who knows: thirty years from now, maybe Petersburg will be the next Asheville.

PrevLagers for the locals.
As the airline industry retracts, keeping the airports busy is anything but child’s play.Next

4 thoughts on “Petersburg, Virginia: will small cities ever get the same infill as the big kids?”