This post serves more as a prelude to a forthcoming, lengthier rumination on retail conditions in Columbia Heights, a Washington DC neighborhood I have explored multiple times in the past. 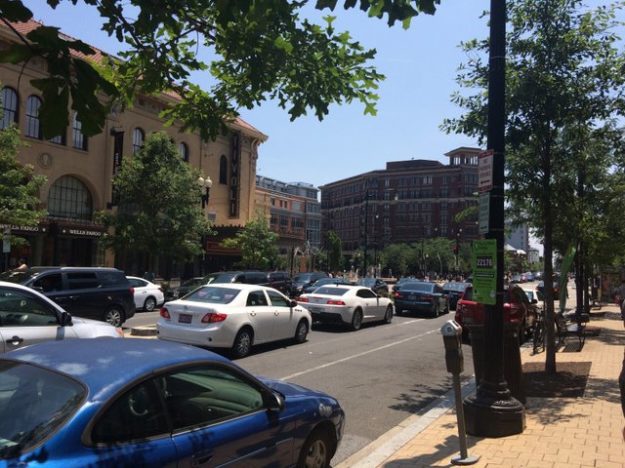 It is among the oldest “suburbs” platted outside of the original l’Enfant plan for the capital region. I apply quotes to the word “suburb” because, though it sits almost squarely within the center of the district and is thoroughly urban by almost any metric, at one point in time it served the function of a suburb in relation to older, even more commercial active areas to the immediate south: neighborhoods like DuPont Circle, Logan Circle, Shaw, and Adams-Morgan. Additionally, Columbia Heights’ position just north of Florida Avenue is critical: Pierre l’Enfant’s original name for Florida Avenue was Boundary Street, and it represented the northern edge to which the lettering system he applied to east-west streets in his 1791 plan for the federal capital city. Just a couple blocks to the south of Florida/Boundary Street is the busily commercial U Street, followed one block north by V and then W Street; the plan for the District omitted the last three letters of the alphabet. Then comes Florida Avenue.  And immediately north of Florida Avenue is a steep hill leading into the featured neighborhood; the surveying and engineering standards of 1790 may have determined the hill was too steep for horse-drawn vehicles to navigate, so it became an appropriate boundary for the l’Enfant Plan.

More than two centuries later, this formidable slope makes the name “Columbia Heights” that much more apt.  Standing at the optimal point along the north-south arterial 16th Street NW, one can easily peer downhill at the street’s southern terminus: the White House. Back when the original developed limits of Washington did not extend much beyond the l’Enfant Plan, the neighborhood was an outlying area—as much of a bedroom community as, for example, Greenwich Village was to Lower Manhattan over two hundred years ago (when what we today call the Financial District was “New York City”). Continued urbanization in both cities eventually endowed the two low-rise, mostly residential districts with the character of urban neighborhoods.

A distressed and crime-ridden neighborhood during DC’s nadir in the 1970s and 80s, Columbia Heights today hardly looks like could have ever harbored extensive civil unrest, but 14th Street in the photo above was among the most devastated corridors in the aftermath of the Martin Luther King, Jr. assassination. Visual evidence of revitalization abounds: many of same gentrifying forces that characterize the majority of District of Columbia. The Columbia Heights Metro station, completed in 1999, helped reaffirm the neighborhood’s centrality and encouraged considerable amounts of high-density, transit oriented development that have turned the intersection of Park Road and 14th Street NW into one of the biggest pedestrian nodes outside of the original plat. 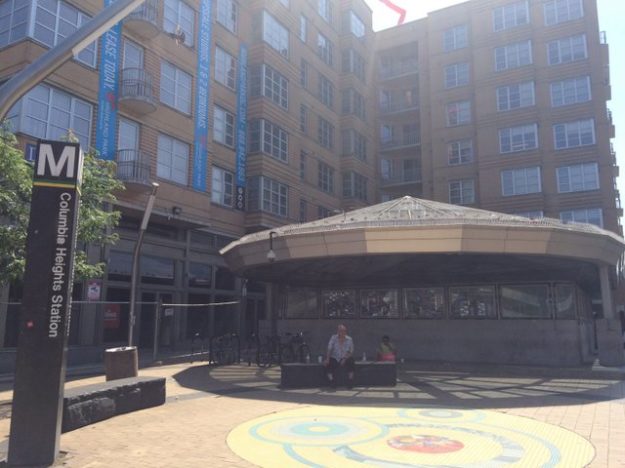 Directly across the street from the metro stop is this neighborhood civic plaza, carved out from a large multifamily residential structure completed about a decade after the Metro stop opened. 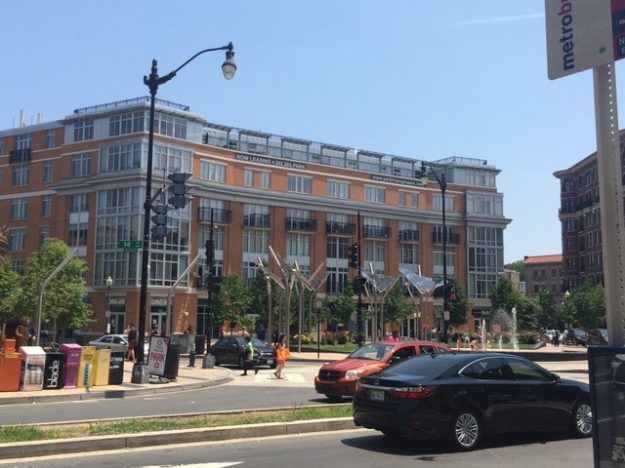 Unlike many other neighborhoods that have surged in value, Columbia Heights has retained many of the stable Latino and African-American residents that have claimed the rowhouses and apartment buildings throughout Columbia Heights’s side streets. 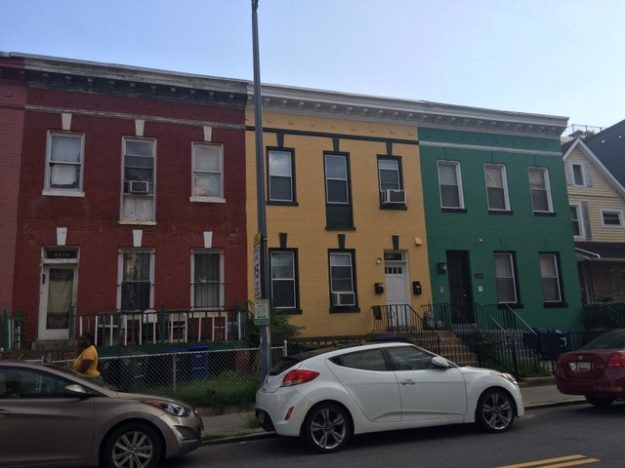 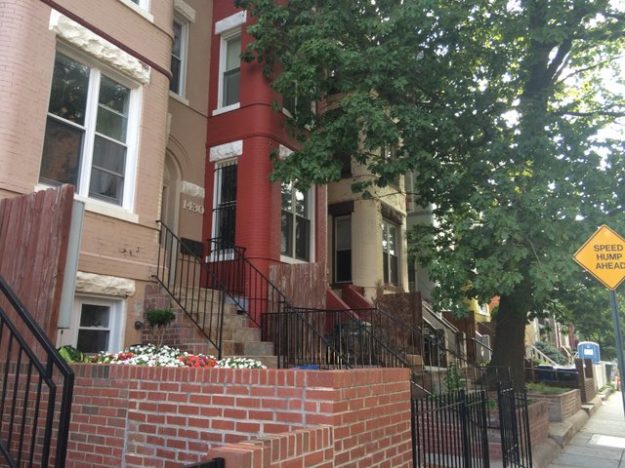 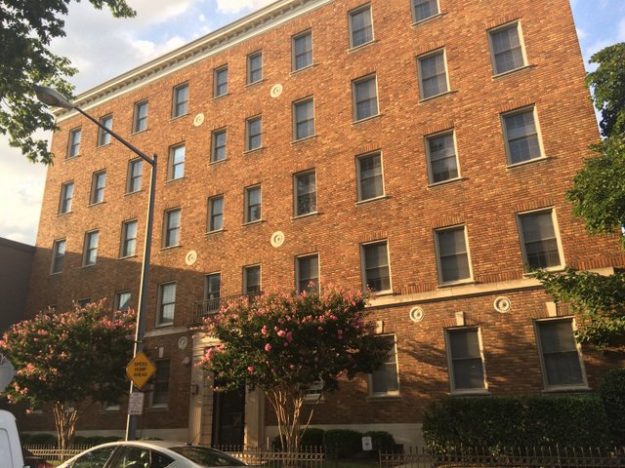 Despite the population density, the steadily rising median household incomes, and one of the highest weekday Metro passenger boarding rates outside of downtown DC, the hundreds of thousands of retail square feet face continued occupancy struggles. 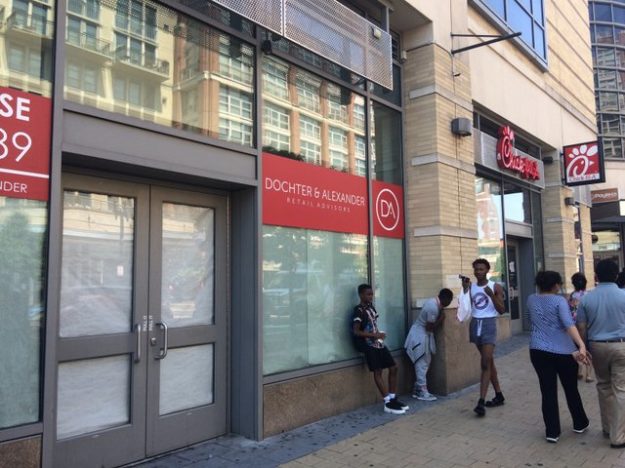 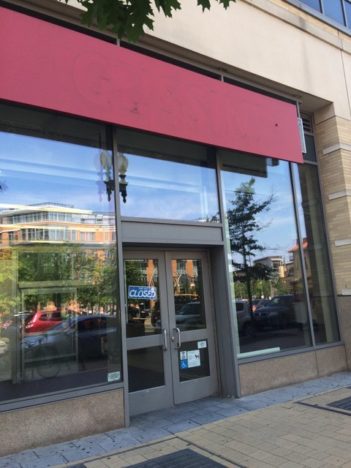 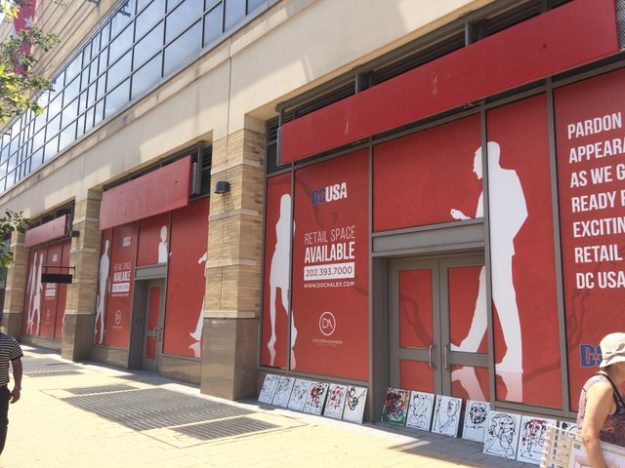 The papered storefront in the photo below is particularly disconcerting. 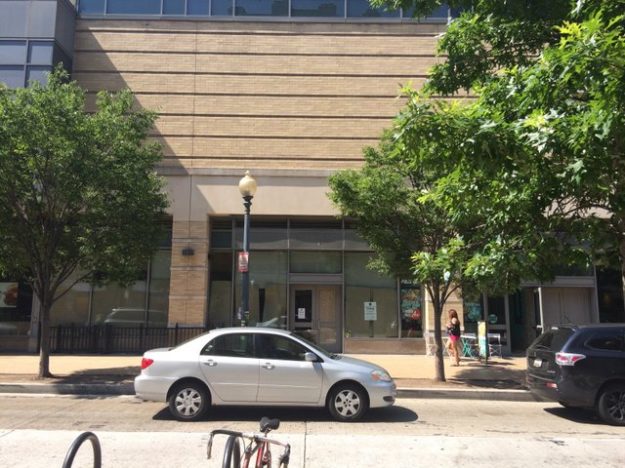 It’s a shuttered Panera Bread, the fast-casual restaurant chain that has been among the most consistently successful for the last decade or so. I don’t think I’ve ever heard of a Panera closing, but it suggests that all the favorable economic indicators in the world weren’t enough to keep this location sufficiently profitable.

Don’t get me wrong: Columbia Heights still boasts hundreds of thousands of square feet of occupied retail, with tenants both local and nationally recognized, catering to multiple socioeconomic strata that live nearby. But the recent closures of several middle-market tenants (Panera, Staples, Five Guys, Potbelly, Children’s Place) does not necessarily augur well for surviving tenants like Starbucks, Chipotle, Petco, DSW Shoe Warehouse, or even IHOP. And here’s what I see as the culmination of these challenges: 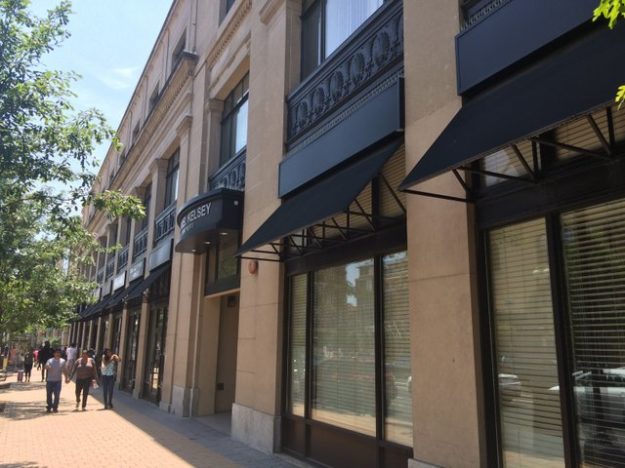 This building, just a block and a half north of the Columbia Heights Metro stop, receives considerable foot traffic and features mostly local establishments, which generally suggests that it lacks the magnetism to lure the big national brands.

But it’s not for lack of trying. 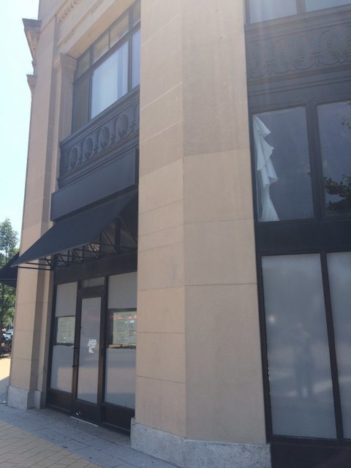 The corner of the building remains sheathed in paper, with permitting info on either side of the doorway. Thanks to their superlative visual prominence, corners tend to command higher leasing rates than other portions of a building. Perhaps those City-initiated signs indicate something lucrative. 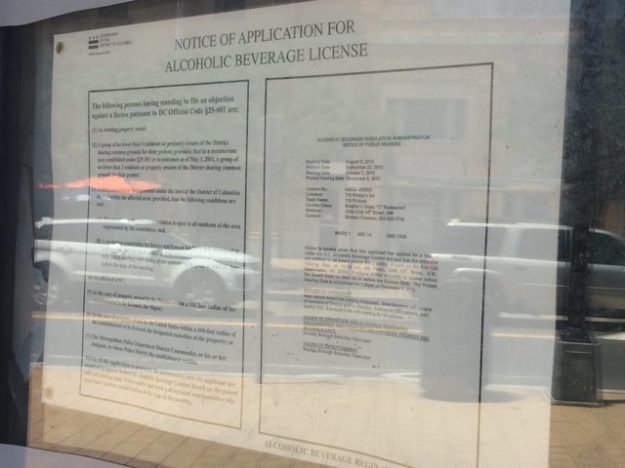 Hmmm, a liquor permit. Those are expensive. Whatever is planned for this corner, the owner probably has particularly deep pockets. Let’s take a closer look.  (And forgive my reflection on the right side of the pic; I’m usually better about avoiding that condition.) 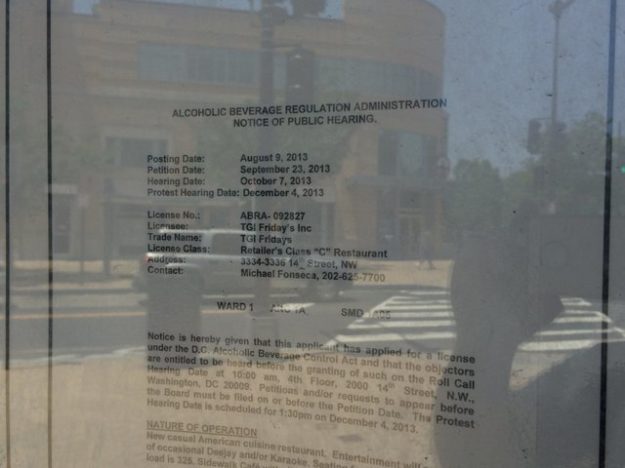 Is it legible? The licensee is TGI Fridays Inc. Yup, the ubiquitous national chain, a suburban archetype, plans to try its hand at the site….

…except that the posting date is August 9, 2013. This notification is almost five years old. The age of the sign suggests two things: corporate-based expansion plans for TGI Fridays have hit a snag, and nothing else has come in the last five years to supersede this liquor permit—or the lease. While it’s possible that TGI Fridays is still working out some kinks, let’s be realistic here: it doesn’t usually take a national chain this long to get through permitting, and the landlord was probably delighted to secure a lease for a stable, broadly recognized chain with real potential to bring in the crowds.

But is it so stable? TGI Fridays, like many of the time-worn middle-American restaurant chains, has faced flat or declining sales in recent years, resulting in the closure of some of the least profitable locations. Though broadly associated with suburbia, Fridays historically has boasted locations in the absolute center of downtowns, often intended to attract convention-goers or other tourists. But a racially and socioeconomically diverse urban neighborhood like Columbia Heights, which had a reputation for crime as recently as fifteen years ago? That’s a gamble. And, given the enormous hurdles that bricks-and-mortar retail are facing in 2018, the business development team at Fridays probably decided—despite the surging restaurant scene in DC and numerous other cities—that Columbia Heights simply wasn’t worth the risk. After all, most of the growth of restaurants has come through either fast casual chains (like Panera and Five Guys) or eclectic local and ethnic eateries. DC is replete with hybrid ethnic/fast-casual mini-chains (many of them originating in the region), and if Columbia Heights cannot support a location of the home-grown Five Guys or the dominant Panera, it’s unlikely to attract a Fridays, Chili’s, Applebee’s, Ruby Tuesday, or any of the other middlebrow chains that have begun to falter these last few years.

The lease went bust. This papered-up corner at the heart of Columbia Heights probably reveals little about the neighborhood as a whole, but it speaks volumes on the challenges facing all forms of retail in the Age of the Internet. While retail usually follows rooftops, the struggles to keep occupancy in Columbia Heights–where rooftops are everywhere–don’t speak well for the future. If a neighborhood with a population density greater than 99% of the country’s land area can’t keep its tenants, what does that say for sprawling suburbia—where TGI Fridays has been as entrenched as scrapbooking and soccer leagues?

PrevCoffee shops have morphed into an omnipresent urban gathering place. Why not tea?
If you can’t remove the room with a view, build anew.Next

16 thoughts on “The restaurant scene of Columbia Heights: in here, it’s always Tuesday.”