As the airline industry retracts, keeping the airports busy is anything but child’s play.

In the loosest sense, the major airlines of America have responded to market shifts in much the same way as department stores. Over the last quarter century, both industries have experienced one consolidation after another. Department stores were considerably more abundant; with rare exceptions (Sears and J.C. Penney come to mind), most of the retailers in our malls had a regional orientation, with fewer than 100 locations scattered across between five and ten states. In many respects, the quantity of department stores made their widespread implosion much quieter, at least until it became obvious in the last few years what a devastating impact this was having on the traditional suburban mall throughout the country. Airline companies, fewer in number and generally national (or international) in scale, generated quite a bit of press, when, for example, United united with Continental, when Delta absorbed Northwest, or when American took US Airways under its wing.

Beyond consolidation, it may seem like these two industries have little in common. But the shrinkage of both airlines and department stores down to a few key players is influencing the portals by which consumers customarily engaged with them as businesses. We’ve witnessed numerous examples of the struggling and dead malls left in the wake of all those closed department stores. Ironically, for airports the impact has been a bit subtler. No international airport in the United States has closed that I’m aware of, but many of the second-tier airports (those smaller than the top 10% in terms of overall enplanements or departures) have lost a considerable amount of their mojo. I’ve written multiple times about the cavernous hallways of the most heavily affected airports; as an example, facing persistent emptiness, United had to close an entire concourse after the acquisition of Continental Airlines, for which Cleveland-Hopkins International (CLE) was a hub. Now, a metro area of nearly 3 million sees only a little over a dozen direct flights on a typical day.

The best-managed airports have sought new methods of organizing their excess real estate. 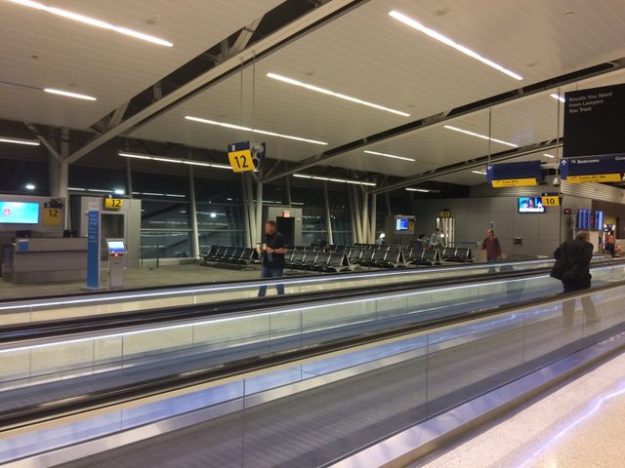 Indianapolis International (IND) was never on the scale of CLE, though it did serve as the primary home to budget and charter American Trans Air until its 2008 bankruptcy. The Weir Cook Terminal itself, constructed in 2008 near the site of the previous terminal, won considerable regional press for its design and aesthetics. Year after year, it has ranked #1 in North America for the quality of its service. Now almost a decade old, it still looks great. 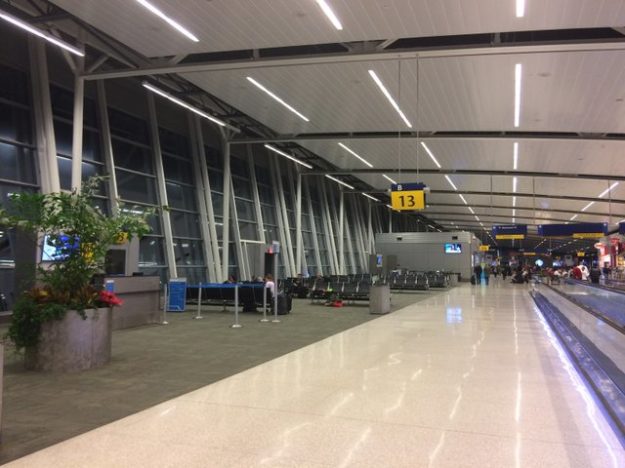 But, even though it reached a peak of 8.7 million passengers in 2017, this still feels like a modest clientele for 44 gates. And 44 gates isn’t particularly large—probably what one would classify a third-tier airport. No wonder it looks so pristine; it hasn’t exactly endured that much wear and tear.

And, even amidst metro Indianapolis’ steady growth and a recovery in passengers from the low in 2013, it’s still oversized. How do we know? 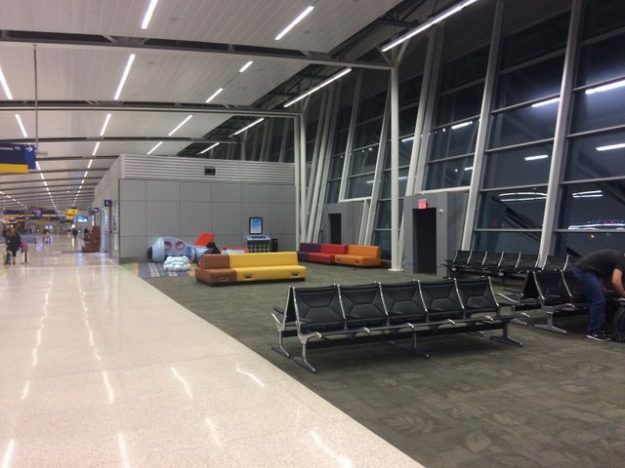 A play area in the distance for bored and fidgety children. Up close, it’s obvious what has happened. 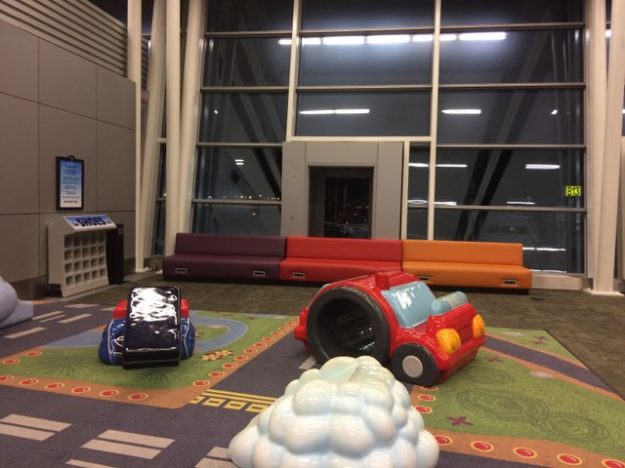 The benches in the back block what used to be another gate. The Indianapolis Airport Authority determined at this point that a free guest amenity is more important. Obviously, this could change at a moment’s notice: it doesn’t appear that the airport’s leadership invested heavily in this recreational respite. But it broadly echoes the expansive stretches of unused check-in counters I observed a few years earlier. Emptiness throughout. Not surprisingly, from my typical visits between one and three times per year, the retail turnaround at IND seems unusually high.

I don’t foresee this airport closing down a concourse any time soon; by most metrics the airport is still performing better than most of its peers. But any arrivals after 8pm force the passengers to trudge through vacant halls to the baggage claim. Such emptiness undermines any attempt to welcome new guests. But what else can the Airport Authority do? Even though airports leave their customers captive as they await their flights, the realms of airlines and retailers achieve a Venn diagram’s relations, with the fortified marketplace of an airport serving as the diagram’s intersection. If airports contend with this emptiness for another decade, we’re likely to see more gates get blocked off. Possibly with vending machines. To compensate for the closed restaurants.

PrevPetersburg, Virginia: will small cities ever get the same infill as the big kids?
Coffee shops have morphed into an omnipresent urban gathering place. Why not tea?Next

13 thoughts on “As the airline industry retracts, keeping the airports busy is anything but child’s play.”