Lagers for the locals.

Brookston, Indiana doesn’t exactly have a high profile—it’s hard to think of too many towns with a population of 1,200 that do—but it has at least a handful of the sort of core businesses one might expect for it to be able to function as an autonomous community. A bank, a gas station with a convenience store, a dollar store, and a free-standing Subway location (with a drive-thru, which is something I had never seen until recently). In short, Brookston features everything one might expect from a town of its size. 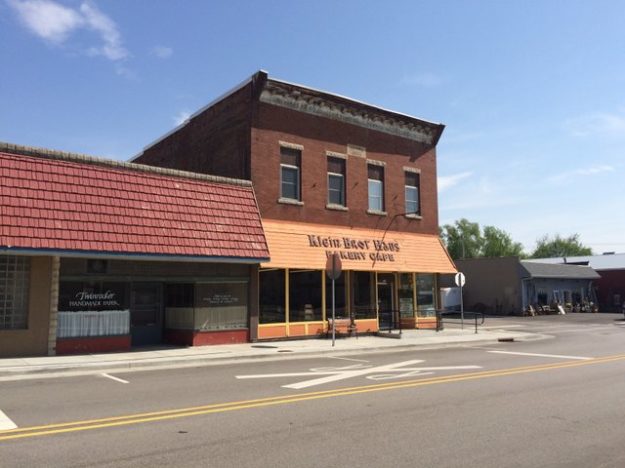 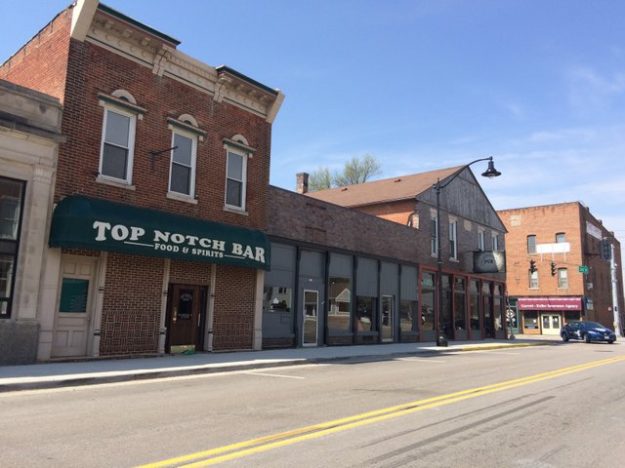 And, in 2018, the town claims what appears to be another prerequisite: a brewery. 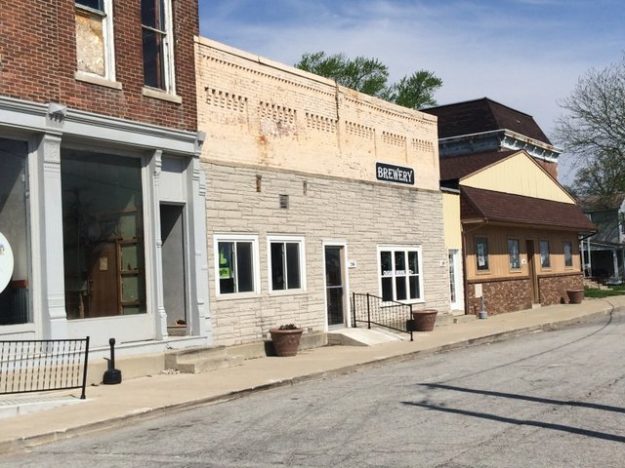 I can’t tell if Crasian Brewing Company has been operating for months or years, but it appears to have made enough of a name for itself to overcome its diminutive sign and far-flung location: it’s not even along the core of Brookston’s three-block main street (3rd Street). Instead, it sits tucked away, across from the railroad tracks that bisect the town, on the unsurprisingly named Railroad Street.

Like many others before it, Crasian seems to have found its niche, despite an earlier closing time than the usual bar, despite lacking a kitchen and serving no food (or hot food at least), despite serving no other wine or spirits, and—perhaps most salient—despite operating in what might call an extremely lightly settled area. Brookston has no real competition—no larger communities—within a ten-mile radius, which could prove its blessing and its curse. And, as a retailer, Crasian Brewing Company thus compensates for the lack of nearby rooftops by functioning as a de facto entertainment center for adults, featuring periodic cornhole competitions, live bands, poker tournaments, vinyl night, partnerships with other vendors (including the obligatory food trucks parked out front). They even offer specialized workout classes, followed by easy access to refreshments (Detox/Retox). You get the idea.

Most importantly through, the owners of Crasian have chosen their real estate wisely: an underutilized old building in a historically walkable setting. It’s a big, open space with sturdy old floors that can easily accommodate the bulky, weighty equipment necessary for a microbrew.   Since the building was old and (if Brookston is remotely similar to most Indiana small towns) the area wasn’t exactly surging with investment, the odds are good that the proprietors were able to snag the space at a rock-bottom price. And, truth be told, though microbrews don’t usually encourage intoxication at the same rate as other bars, it’s wise to at least serve drinks in a walkable setting that won’t force everyone to leave the premises in a vehicle.

A long-neglected older building just makes for more lucrative space for a comparative novelty like a small-town microbrewery, because it endows it with a certain industrial chic that a strip mall can never claim. And it helps to reassert Brookston’s tiny main street area as a sort of hub for the surrounding rural community. And, while, I wouldn’t exactly say Brookston is thriving, it didn’t appear to be dying on the vine either. 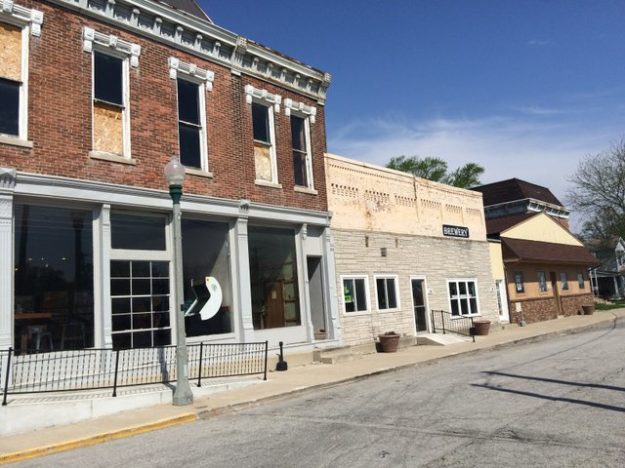 Take this building next to the brewery. 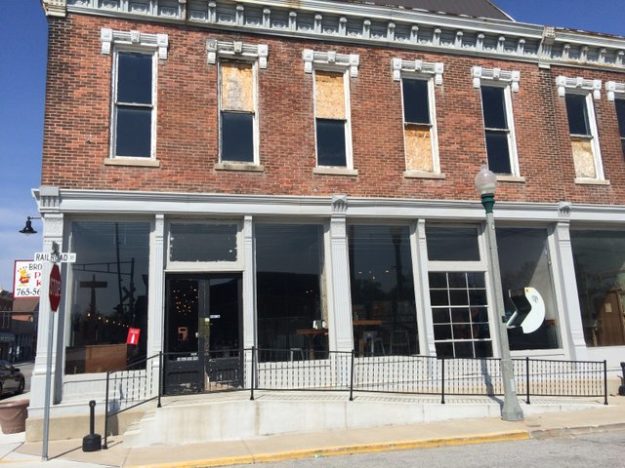 While the upper floor clearly suffers underutilization, the lower level’s prominent storefront windows proudly display a Pizza King, the classic chain scattered throughout rural and urban Indiana. And it offers the same exposed brick aesthetic that no doubt attracted Crasian Brewing Company to the area. 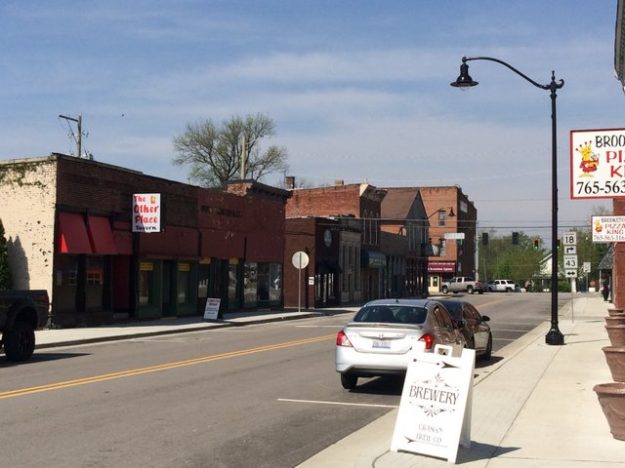 Crasian in Brookston operates under the same fundamental philosophy that animates another microbrewery I wrote about a few years ago: Brew Gentlemen in Braddock, Pennsylvania, a town with only a few hundred more people than Brookston. While cornfields surround Brookston in every direction, Braddock sits squarely in the midst of the industrialized Monongahela Valley—a string of old steel towns radiating outward from Pittsburgh, most of which have suffered the complete departure of their primary industry, and, thus, their entire employment base. Braddock has lost 90% of its population since its peak in 1920, and its socioeconomic profile (and poverty rate) reflects it. No doubt many buildings in Braddock’s downtown faced the wrecking ball, in keeping with such a staggering exodus. Yet amidst its poverty, Braddock still boasts a few cheap, sturdy buildings that the right entrepreneur can deploy as a lab for alcoholic alchemy. And that’s exactly what the Brew Gentlemen did.

It’s not unprecedented. A century ago, most towns of at least a few thousand people could claim an independent brewery. The era of Anheuser-Busch decimated the market for customized, localized variations on a theme, reducing the prevalence of local breweries. The early 21st century witnessed a reawakening in the interest for craft brewing, particularly concentrated in a few cities with a particularly enterprising niche demographic. Now that curiosity has rippled outward, to the less fashionable cities, to their suburbs, and even back out to the smallest of towns. With the right ingenuity, perhaps the talents behind Crasian can galvanize downtown Brookston into a locus for libations. 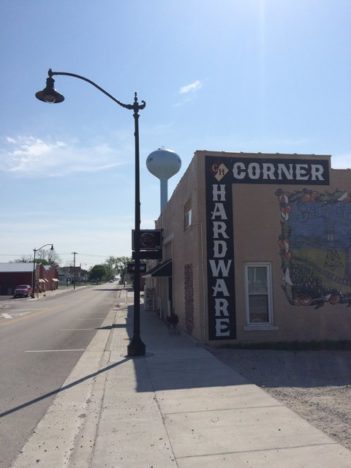 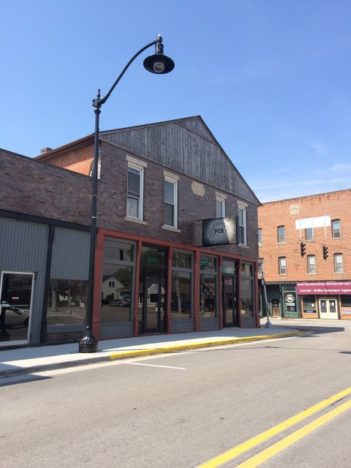 At least the town’s got a few additional promising candidates for such a transformation. And in this day and age, all the brewers need are four brick walls, a roof, and a claque of thirsty followers.

PrevThe old stone gap in an intact mountain town.
Petersburg, Virginia: will small cities ever get the same infill as the big kids?Next

8 thoughts on “Lagers for the locals.”