Urbanism sells. Even in suburbia. In the Ozarks.

I can comfortably assert that cities are cooler than suburbs without providing any evidence to back it up. In 2018, it’s basically an axiom, so why bother explaining? Isn’t part of the mystique behind “cool” its tendency to evade easy definition? Few suburbanites would ever make any reasonable effort to argue that their municipalities are “cool”, and this is hardly a fault of either the suburbs or their denizens. They care about different things than those city slickers. And the increasingly divergent worldviews between central cities and the purlieus—perhaps most intense when we juxtapose urban and rural America—manifests itself in just about every aspect of American culture, with politics offering the most bitterly divergent wedge.

In this day and age, urban dwellers usually embrace new technology, artistic movements, fashion, culinary experiments, and even figures of speech much sooner than the non-urban counterparts. Whether deserved or not, these criteria have shaped “cool” for the last half century, and there’s little evidence that this is going to change. So why are cities such incubators of cool? As suggested above, it could have something to do with cities’ abilities to attract a certain constituency that values these characteristics, a subject Richard Florida broadly postulated in his 2002 The Rise of the Creative Class. It’s a chicken-egg dichotomy.

But why is it almost a foregone conclusion that urban places will adapt to novelties sooner than their counterparts? The higher population density may play a role, since densely populated settlements encourage more spontaneous interpersonal engagement. College towns, therefore, are often cool, even if they’re smaller than many suburbs. They don’t have to be big as long as they’re dense. Simply put, people see and engage with a higher number of people with far greater frequency in cities than they do in the suburbs or the country. And this expedites the transmission of all kinds of cultural indicators—the fundamental standards for “cool” among them.

That said, just as some cities (and some neighborhoods within them) cultivate cool more readily than others, not all suburbs are immune to the allure of those playfully defiant visual cues we typically associate with urbanism. Perhaps unsurprisingly, the inner ring suburbs closest to our central cities—where housing is denser, day-to-day activities are more walkable, and random encounters with friends and strangers are more common—seem to promote almost the same level of innovation exchange. Places like Hamtramck and Ferndale (abutting Detroit) or Evanston and Oak Park (touching Chicago) or Takoma Park and Silver Spring (in Maryland just outside Washington DC) quickly come to mind from my personal experiences. But these suburbs, broadly emulating the ethos and aesthetic character of our city centers, are like college towns in the middle of a big bland metro. They remain the exception rather than the rule. For the most part, suburbs resist coolness at every turn. And in many respects, the people who live there are happy to put some distance between themselves and the Joneses.

Nonetheless, it’s not hard to find evidence where the cultural novelties forged in urban America begin to ripple toward the outskirts. It’s bound to happen eventually, and for our smaller metros that lack anything we could reasonably label “inner-ring”, sometimes the next best venue to test out novelties is in the otherwise cornball, low-density, auto-oriented exurbs. Here’s an example. 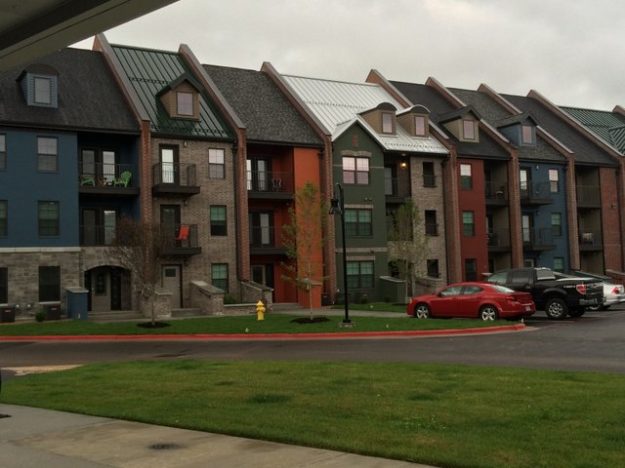 It’s an apartment complex with variegated rooflines, colors and building materials. And while it’s probably still too low-rise (and too much of a pastiche) to fit in well with most downtown multi-family housing in 2018, it would be perfectly reasonable to see this development in a gentrifying inner-city neighborhood within a mile or two away from the core. A townhome, perhaps. But the presence of those parked cars should hint at the reality: this isn’t remotely urban. 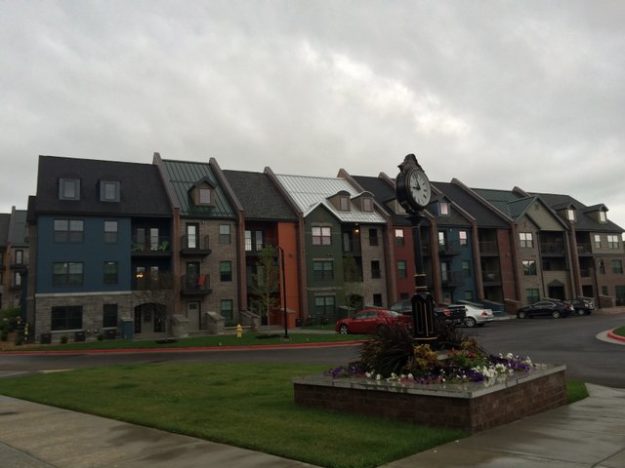 It’s the outskirts of Springfield, Missouri’s third largest city. And although downtown Springfield has experienced a visible revival of interest in the last few years, customary of most cities its size, this apartment complex, known as Township 28, occupies land that’s a good twenty minute drive from downtown, in the far southeast corner, less than a mile from the municipal boundary.  Here’s a map of the area: 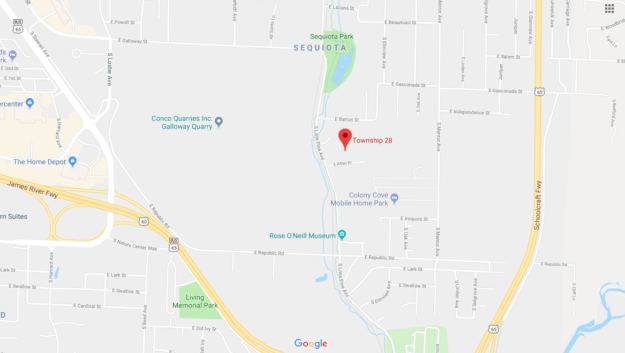 Not exactly a dense network of city streets, is it?  While the adjacent collector road, Lone Pine Avenue, hosts a greenway trail for much of its length, thereby linking Township 28 to a few regional parks, the area in general is almost entirely automobile oriented. Not a lot of random encounters with friends or strangers.

Yet, for this corner of suburbia in a city of this size, the design aesthetic at Township 28 is trés chic. The sensibility continues into the community areas. 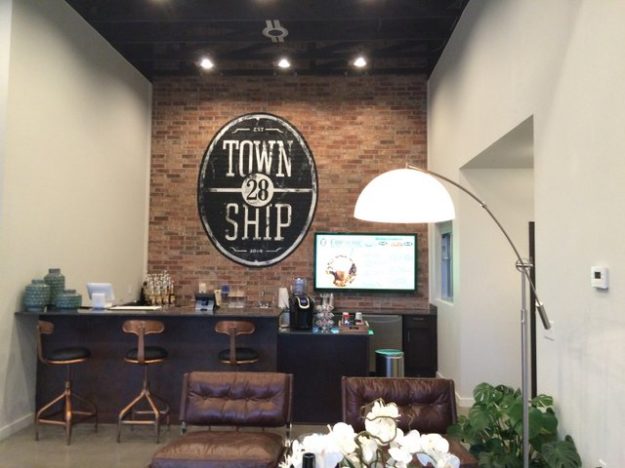 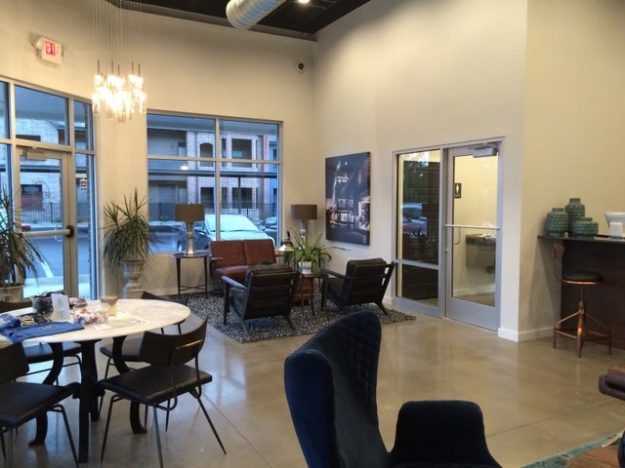 Exposed brick! And its logo painted on the brick, in a creaky, chipping paint that almost gives it a patina…suggesting something a bit older than 2014. It goes without saying that all the other details are in keeping with a contemporary apartment complex that seek to attract an affluent and presumably youthful clientele: granite countertops (even in the bathrooms), keyless entry, free internet and cable, washer/dryer.

The community amenities, on the other hand, betray the development’s suburban roots: 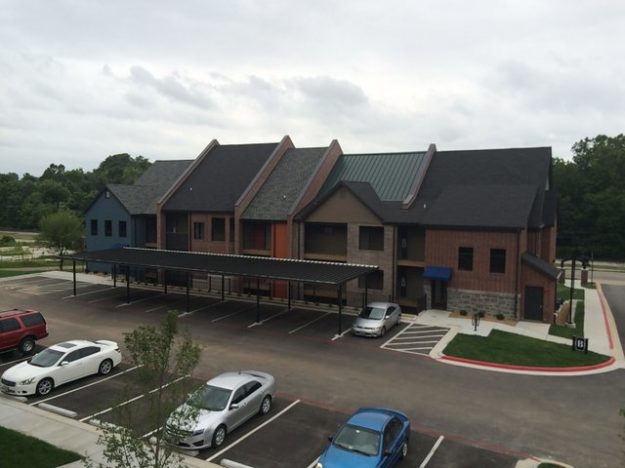 In a more urban apartment complex, you’d never see a roof canopy over a parking lot. I city housing mega-plex may not even offer parking, and if it does, it’ll be in a garage and cost a premium.   And the swimming pool… 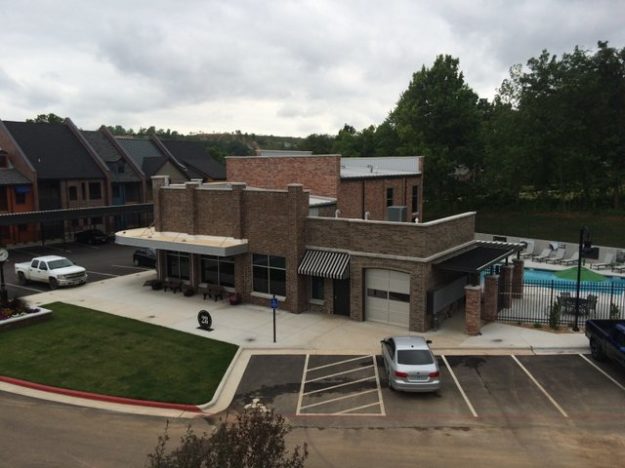 This ain’t a rooftop or a penthouse. It’s a suburban typology, surrounded by parking, with a detached clubhouse (with that exposed brick and logo). But the clubhouse building deliberately mimics the appearance of an old service station, fairly convincingly, I might add. I had to look twice to remind myself it wasn’t a structure that predated everything else. It’s a smart move that suggests an adaptive reuse of an old industrial structure—the exact sort of thing those young whippersnappers love these days.

I’m not sure Township 28 is going to serve as the laboratory for some bold new distilled alcoholic spirits, or the rumpus room that will be birth an edgy new band that fuses bluegrass tunes with Senegalese mbalax drumming. If anywhere in Springfield pushes these innovations to the cultural forefront, it’s going to be in the walkable, idiosyncratic downtown, featuring lots of legitimately old buildings that locals have repurposed for restaurants, shops, breweries. Or my guess is Commercial Street, a six-block stretch of rejuvenating 19th century commercial buildings near the railyard in an otherwise neglected area. 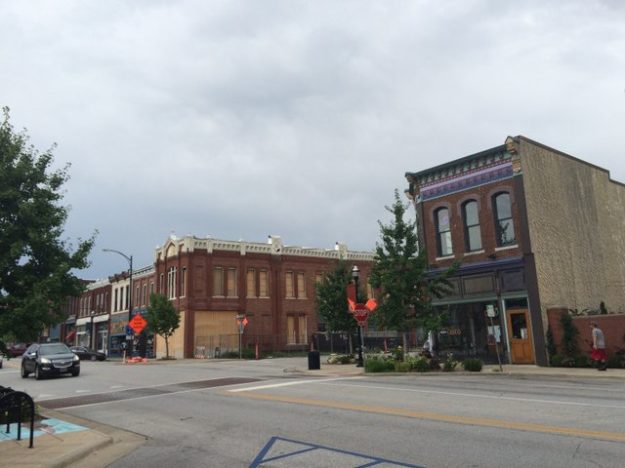 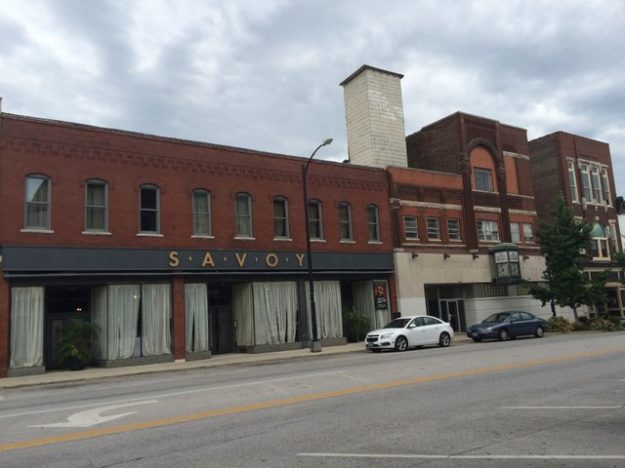 Do these little buildings resemble anything?  It has a vague equivalent in the narrow diverse façades of Township 28, lined up in a row.  (That’s deliberate.)  But of course Commercial Street is the real deal.  Needless to say, these little pockets within Springfield’s expansive half-million metro are the most credible crucibles for cool. Just as they would be in Fort Wayne, Fresno, or Philadelphia.

The developer of Township 28 has appropriated the taste cultures of urban America and recontextualized them within a suburban typology. Because he or she thought it would work in 2014. And was right in this speculation. But it hasn’t always been this way.

While a handful of cities have long boasted a cool cachet—particularly the big and ultra-dense ones, like New York, Chicago, Boston, Miami and San Francisco—as recently as the 1990s, the urban centers of most of the rest of the country had relatively little to offer. To be frank, people went to the mall—it was the closest replica of a downtown that allowed a pantomime of pedestrianism and the random encounters that humans seem almost instinctually to crave. And when new apartments got built in the burbs, they largely mimicked the architecture of the rest of the burbs. Safe, predictable, middlebrow, fiercely uncool. For a time in the 1990s and early 2000s, in fact (before downtown revitalization was a surefire deal), many early apartment buildings in second-tier and third-tier American cities actually imposed a more suburban style and appearance into downtowns. The banks wouldn’t lend to ambitious developers who wanted to emulate the look and feel of Brooklyn in a place like Bakersfield; the risk was too great. Some of the corniest, most uncool apartment buildings are in Midwest downtowns, dating from the 1990s. 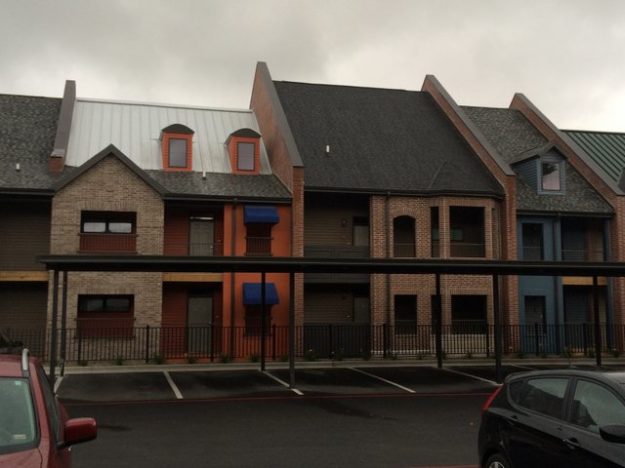 But in 2018, even a city the size of Springfield can support a more contemporary design aesthetic as seen in Township 28, and it doesn’t even have to be in an urban area. Meanwhile, the commercial hub of yesteryear, the suburban shopping mall, hasn’t ever really been cool (at least not in my lifetime). But now even the dyed-in-the-wool suburbanites are rejecting them as an entertainment option. Why not just go into the city instead? Who needs Applebee’s and TGI Fridays?

PrevFeel free to explore; just don’t bring your mate along.
The old stone gap in an intact mountain town.Next

13 thoughts on “Urbanism sells. Even in suburbia. In the Ozarks.”