The old stone gap in an intact mountain town.

In 2018, many smaller cities—those under 100,000 people—can boast revitalized downtowns, offering an array of jobs and shops during the day, complemented by restaurants and entertainment at night. But not every smaller city has yet attracted both a vibrant nightlife and a steady core of permanent residents. And some prominent hotels to boot. Only a few modestly sized cities can boast all the downtown amenities of the major American metros, and Asheville, North Carolina is one of these cities.

Nestled in the heart of the Blue Ridge Mountains, just outside Pisgah National Forest, the city has long appealed to outdoor enthusiasts for its spectacular views. The presence of the Biltmore Estate, America’s largest privately owned house, only amplifies the city’s tourist cachet. On top of this, Asheville has strangely emerged as a center of artistic and bohemian culture indicative of a college town, but its only major university, UNC Asheville, is hardly a flagship school, nor is it a particularly large one (approximately 4,500 students). Yet somehow Asheville has a nightlife that not just surpasses the more prominent university centers of North Carolina but is greater than many cities five times its size. The forces that prompt revitalization all converged in this low-key old textile town, which as recently as the 1980s seemed steeped in a permanent economic malaise. Not anymore. What might have been a one-stop shop thanks to Biltmore is now the broader hub for explorers across North Carolina’s most rugged topography and a tourist destination all unto itself. 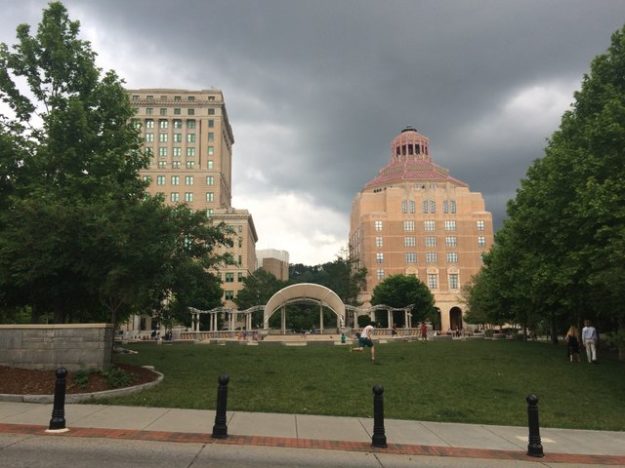 Those nebulous forces helped propel Asheville, when nearby municipalities like Maryville or Johnson City (in Tennessee) or Hickory (in North Carolina) or even Spartanburg (in South Carolina) remain comparatively dormant. And while it’s not entirely clear to me if downtown Asheville has simply always boasted a strong urban fabric, it sure does now. Virtually all of the first-floor storefront space is occupied across the entire city center—not just the primary east-west and north-south arterials—so a visitor can approach an intersection and travel in all directions with nearly equal visual interest. It’s among the most robust small downtowns I have ever seen. Thanks to a combination of touristic appeal and the commitment of the locals (or newly arrived residents) the overwhelmingly locally owned establishments instill downtown Asheville with an air of eclecticism, while a steady growth of hotel construction only reaffirms the already strong density of activity.

But, scattered amidst the general scene of prosperity are some real curiosities, like this one on Biltmore Avenue. 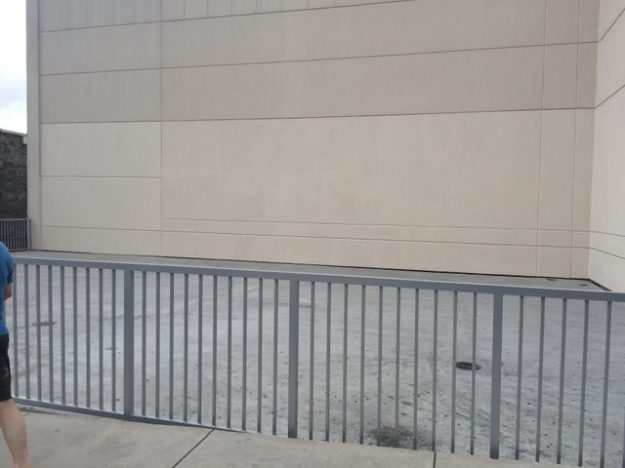 What’s that? It’s not much to look at, that’s for sure, but its part of a larger, recent development: an Aloft Hotel that went up on a large, forlorn parking lot a few years ago, visible here within its broader context. But for some reason, the architect included this unbuilt space right up along the sidewalk, almost like a permanently empty room. 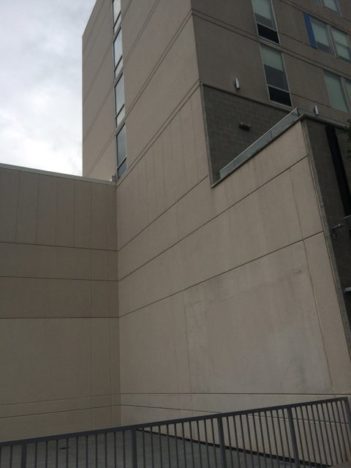 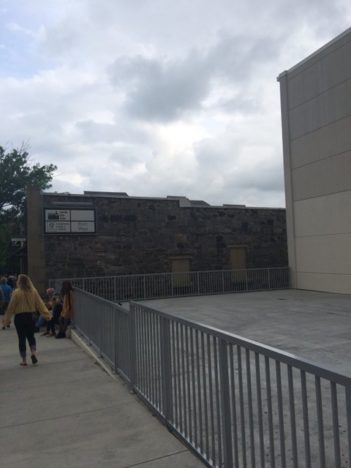 I’m pretty terrible at estimating the size of these sort of things, but I’d gauge that the gap is at least one-sixteenth of an acre: the size of a small urban parcel, though not big enough to support a structure of its own with the same height or FAR of the neighboring Aloft Hotel. It might be a separate entity, though the parcel outlines on Google Maps (usually fairly accurate) suggest that this gap is part of the same property as the hotel.

So what’s the deal? I can’t entirely tell, but it definitely doesn’t seem to align with any logical standards for supporting pedestrian engagement, which characterizes most of the rest of the Biltmore Avenue streetscape. Even the building immediately adjacent to this strange gap offers a pleasing low-slung storefront. 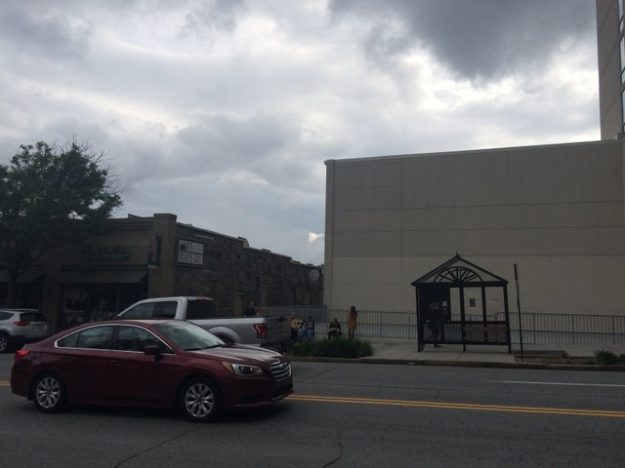 And more of the same just a half-block down the street. 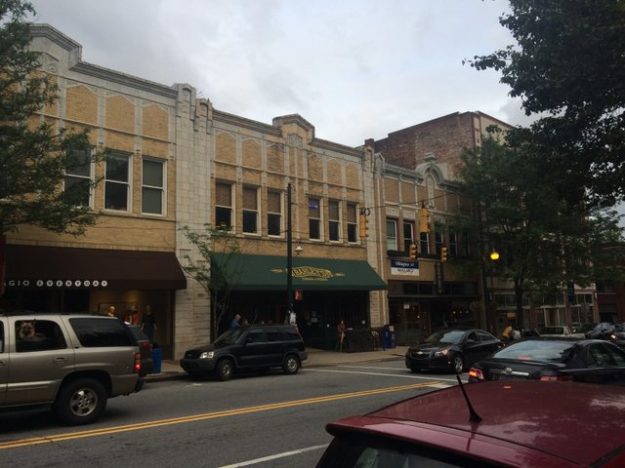 The “empty room” is not part of some potential outdoor seating for a restaurant, since the abutting portion of the hotel features the entrance to the parking garage. It’s not a staging area for food trucks (something that sounds like quintessential Asheville), because the adjacent alleyway includes a grade change that clearly does not accommodate vehicles.

This gap seems almost pointless. However, before I consign this aberration to some sort of planning/architecture/permitting SNAFU, two more observations are in order. First of all, it’s possible that something related to the adjacent garage prevented this portion of the structure from bearing the loads that the rest of the hotel could endure. It could even have something to do with the prior land use, back in 2008, when the area featured a huge nondescript parking lot and a building of undetermined use, whose foundation might have harbored some underground feature that proved too costly to excavate. I’m not a structural engineer, and this still seems like a solution that capable individuals could easily remedy. Secondly, it’s possible that the developer had another intention for this space that flopped. Maybe they can project movies on one of the blank side walls (though Biltmore Avenue seems likely to be a bit too loud).

My final conclusion is that this gap is a placeholder space, likely to host a smarter use when the time is right. The hotel offers enough density of foot traffic, combiled with the general appeal of Asheville’s downtown—in due time someone will find a creative way to activate this space, no matter how small it might be. After all, this is a city with a disproportionate share of urban alchemists. On another tiny patch they found a way to park a red double-decker bus, visible to the left in the photo below. 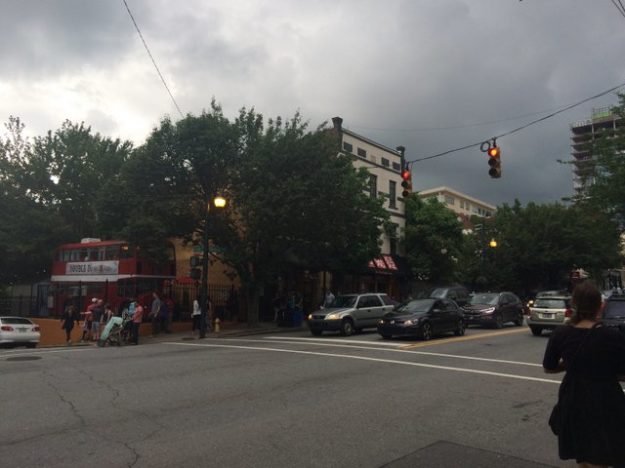 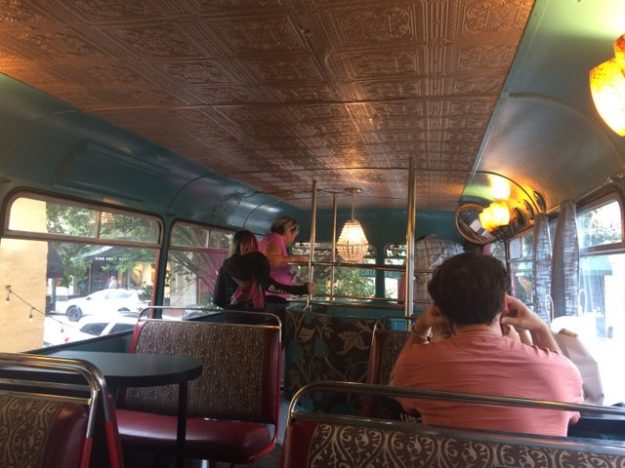 They’ll think of something.

PrevUrbanism sells. Even in suburbia. In the Ozarks.
Lagers for the locals.Next

8 thoughts on “The old stone gap in an intact mountain town.”