Glyph: even in Mayberry, a traditional retailer needs to leave a strong impression.

As the term “retail apocalypse” becomes increasingly mainstream, it’s a bit comforting to see an all-too-rare example of what appears to be a purely local business trying its hand along an American-as-apple-pie main street. It’s even more comforting when the entrepreneur locates in an architecturally challenging building…and succeeds. 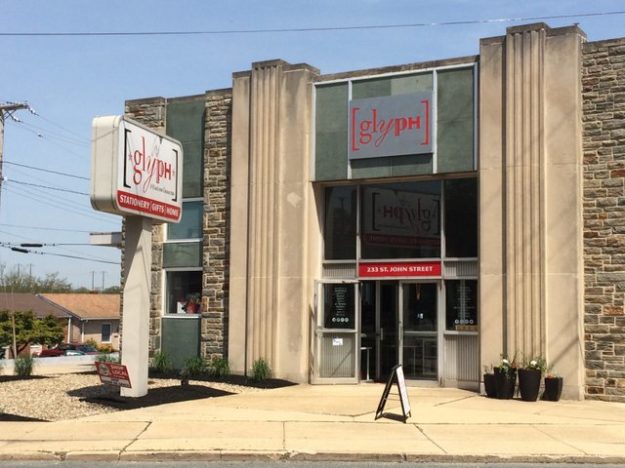 Here we witness Glyph, a stationery-centered boutique that also offers custom graphic design and—this is really great—calligraphy and letterpress workshops. The store stands on an obliquely angled intersection in the winsome town (more like a very small city) of Havre de Grace, Maryland. 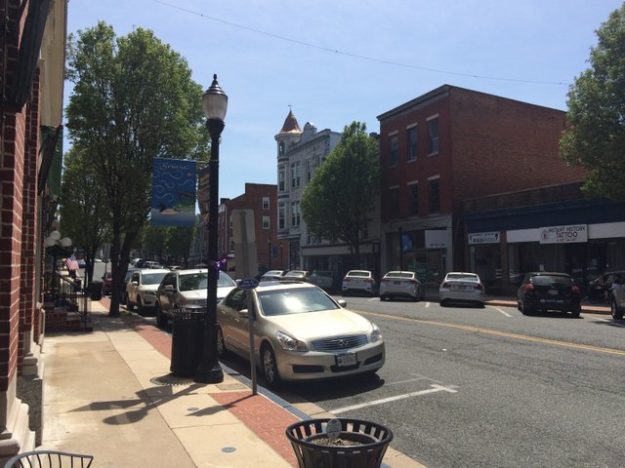 Just 45 miles up the road from downtown Baltimore and perched on a sort of cape where the Susquehanna River flows into the Chesapeake Bay, Havre de Grace is a very attractive town. It’s nice enough to catch the attention of Smithsonian magazine as one of the nation’s best small towns to visit in 2014. It’s a charming town that seems committed to keeping its tightly-knit central business district active. It would be a pleasant way to kill a spring afternoon. But Havre de Grace is not a tourist trap.

I only make that final observation because it may prove instrumental to understanding the success of a business like Glyph. In this day and age, a successful urban retail corridor is less about running errands and more about capitalizing on an experience: the idea of shopping in a town center as a recreational pastime. Havre de Grace breeds nostalgia, and Glyph depends attracting on well-heeled visitors through Havre de Grace’s charm. In the era of online shopping, there’s no way a retailer like Glyph could survive at a mall or a strip center. They lack charm and (especially the strip centers) cater primarily to utilitarian shopping—the type where the internet is dominating. And it’s probably still a challenge to keep a place like Glyph operational even along the reasonably healthy main street of a middle-class town.   But Glyph decided to give itself another challenge: an anomalous building that its developer most likely intended to host office uses.

Essentially, as a retailer, Glyph is a non-conforming use. Those embossed faux-pillars on either side of the doorway evoke Art Deco to me, but the sea-green panels and the extra heavy, pervasive vertical accents suggest something a bit later—probably a scaled-down effort at mid-century modern from the late 50s or early 60s. If this is true, the Glyph building comes from a time when town centers were beginning to falter. It probably made no sense for the developer to construct a more conventional retail building, as office was the only viable use. By 1960, people had already decided they preferred the malls and strip centers. Even beyond this speculated historical context, these structures intrinsically make for an inhospitable habitat for retail. The thick walls aren’t easy to modify (Cold War fears necessitated fortress-like strength), and the fenestration is reticent. That is, the lack of windows makes it somewhat uninviting, and retailers can’t easily put their merchandise on display for potential passers-by.

Nonetheless, I think Glyph is likely succeeding—against all odds. Havre de Grace seems just on the verge of taking off to become a truly vibrant town (rather than merely a pleasant one). For all its disadvantages, the mid-century building is still interesting, well maintained, and visually distinctive from the other structures nearby. And Glyph itself has decided to try for more within those thick walls: not only does it sell durable goods, but it also offers classes and typography services. A one-stop shop. A retailer amidst the experiential economy.

If the proprietors of Glyph generate more revenue from graphic design and typography, they have positioned themselves as a predominantly service-oriented biz—exactly what works in this unforgiving retail climate. Therefore, what might have proven the kiss of death for some ambitious entrepreneurs has turned out to be a feather in their caps. And no, the owners at Glyph didn’t pay me for this article (they’d probably tut-tut my eccentric choice of fonts). I’m just doing my share to help draw more attention to Havre de Grace and to boost it to the next level, because it deserves it: a value judgment that Glyph and I probably share.

PrevDrive-thru Subway: a contradiction in transit…and in sandwiches.
Sears at Castleton closes: no longer a crisis; merely an opportunity.Next

11 thoughts on “Glyph: even in Mayberry, a traditional retailer needs to leave a strong impression.”