Feel free to explore; just don’t bring your mate along.

In places that seek to restrict certain behaviors, it’s not uncommon to use images instead of text. So a sign like this should come as no surprise: 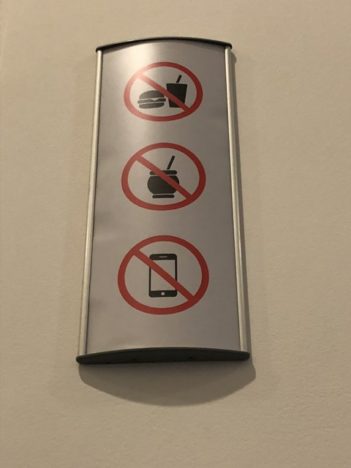 The top symbol goes without explanation, and, at least since around 2007 so does the bottom. But what’s that one in the middle?

For those who recognize it, it’s probably a foolproof cue that this is not an image from the United States. For those who don’t recognize, it’s a simplified icon of yerba mate, the signature high-octane tea beverage of several countries throughout Latin America, particularly Argentina and Uruguay, though southern Brazil and Paraguay are known to imbibe as well. Elsewhere in the world, it is equally recognizable in Syria. And it’s not terribly difficult to find in the United States—specialty coffee and tea vendors are known to offer it, and virtually every supermercado will sell several different brands of the crushed, dried leaves in larger paper bags. Not surprisingly, the Middle Easter grocers routinely sell it as well, and in Argentina and Uruguay, it comprises an entire aisle.

But there would never be a region in the U.S. where the yerba mate symbol would have any meaning, because there’s no reason for it: it’s not a widely known or consumed beverage. But in Buenos Aires, it’s ubiquitous. The national drink of Argentina and (especially) Uruguay, it’s not so much a popular item at restaurants as it is a drink consumed in homes or shared among friends. It’s an introverted beverage, despite the energy it provides through its unusually high caffeine content. In Uruguay, it’s so popular that one will routinely see people carrying the cup around the mall in one hand, with a thermos cradled in the crook of their other arm, ready to steep the leaves with hot water to prepare for the next sip.

This practice of drinking yerba mate underlies why this icon is so effective. The unusual gourd-like cup holds the crushed leaves (and, more commonly in Argentina than in Uruguay, also some of the stems) that the drinker fills nearly to the top. The user also inserts the unusual metal bombilla or straw, where the end embedded in tealeaves terminates in a club shape filled with tiny perforations, which serve as an infuser. After pouring a small amount of hot water in to the gourd (usually called the mate), it steeps for thirty to sixty seconds, allowing the leaves to expand and permeate the water with the highly polarizing flavor of yerba mate. Then one puts his or her lips to the bombilla and slurps, only getting mate-water because the infuser prevents the leaves from getting sucked into the straw. Pour again from the thermos and repeat.

Yerba mate responds well to steeping and resteeping throughout the afternoon, and while it’s most popular hot, it’s also available chilled or with other sweetening additives. It has become a popular ingredient in energy drinks in more recent years. But the customary approach in Argentina is exactly how it looks—a practice that is generally innocuous but can be messy and a little bit gross if those sodden tealeaves spill from the mate gourd. Probably the main reason for the restriction. (I can’t help but laugh at the more generic symbol with the hamburger and drink, suggesting these are just as much stand-ins for generic symbol for “food” in Argentina as they would be in the United States.)

But with yerba mate, it’s a culturally defined restriction if there ever was one. Nowhere outside of these two countries (Uruguay and Argentina) have I ever seen a single drink so thoroughly embedded in day-to-day living, to the point that a restrctive sign like this is a source of amusement for the average foreign visitor. And most visitors find themselves put off at first by the drink’s bitter, grassy flavor. But it’s not uncommon for mundane signage to define a culture by reinforcing its most ordinary daily proclivities and practices. Just take a look at these subway stations in Singapore, where, to improve traffic flow as the trains arrive, signage and colored strips on the ground indicate where passengers are allowed to stand. 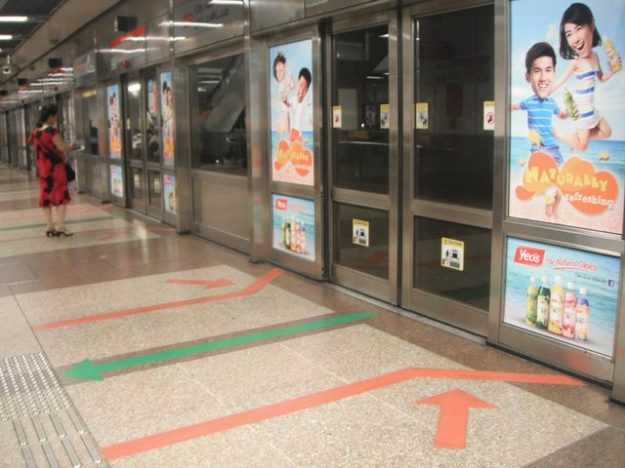 And the accompanying explanation. 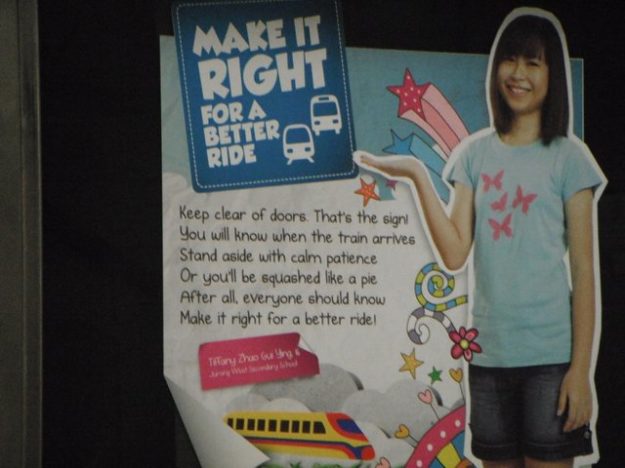 While the restrictions help guide how people tend to cluster—a phenomenon hardly unique to Singapore—the act of turning it into an enforceable rule is overwhelmingly Singaporean. Check out this touristy magnet, which captures the general feel of instructional signage throughout the city. 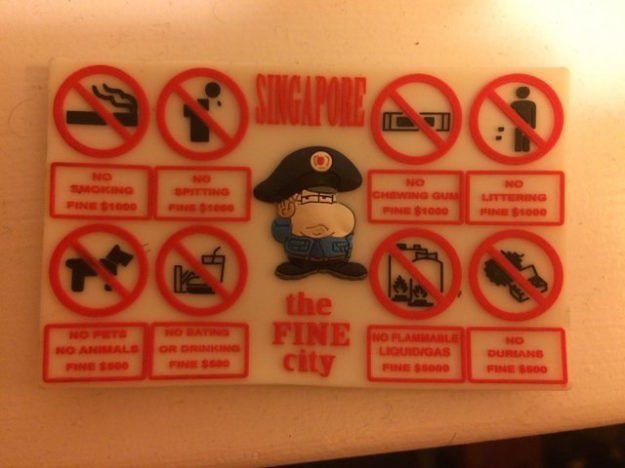 At least they have a sense of humor about it. But the most interesting of these restrictions is the one on the lower right, which is probably as culturally defined as the yerba mate prohibitions. Yes, it’s the notorious durian, that massive fruit indigenous to southeast Asia that evokes a more polarizing response even than Argentinean tea. The aroma that wafts from a durian once you crack it open is akin to magnolia blossoms or commingled garbage, depending on who you ask. Singaporeans tend to favor the fruit, but most also recognize that it would be impolite to bring a durian to a crowded movie theater. Dozens would have to leave in revulsion from the smell. So they prohibit it, punishable by fine—and those fines are a condition more emblematic of Singapore than yerba mate, gourds and bombillas are to Argentina.
Argentine photo courtesy of Sarah Miller.

PrevSears at Castleton closes: no longer a crisis; merely an opportunity.
Urbanism sells. Even in suburbia. In the Ozarks.Next

2 thoughts on “Feel free to explore; just don’t bring your mate along.”