A garage where the grass is still greener.

In Pittsburgh’s Strip District, a neighborhood whose fortunes have waxed and waned with each decade, a successful restaurant stands at the foot of low-lying structure. 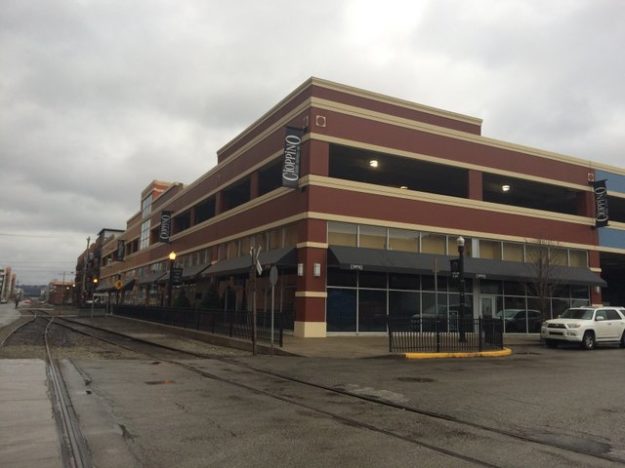 I don’t know much about Cioppino and haven’t patronized the establishment, but the fact that it is still around today places it in the more successful half (if not one-quarter) of restaurants. After all, I took the photo in December 2016, and most independent eateries close within two years.

More remarkable, though, is the fact that it—and any retail, for that matter—has survived while housed in an unlikely physical form: a humble parking deck. 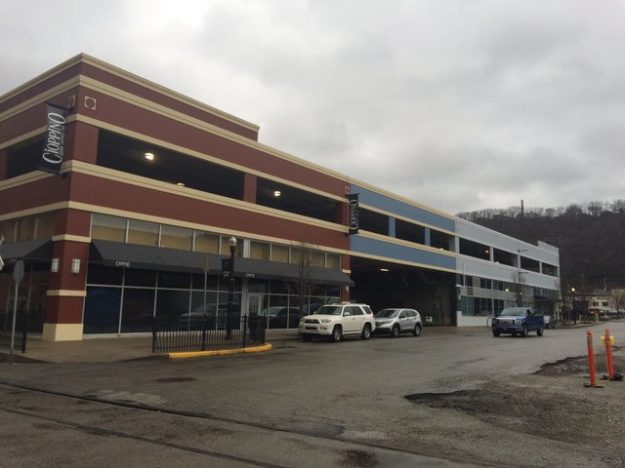 Don’t get me wrong, The Strip District is—again—a desirable urban neighborhood, having re-emerged after a short-lived peak in the 1990s as Pittsburgh’s go-to destination for nightclubs, followed by an equally rapid fizzle. This time around, the neighborhood just east of downtown is reasserting itself as a more sustainable mixed-use quarter, with offices and residences springing up amidst the specialty restaurants and grocers. But I still find it a bit surprising that a reasonably high-end eatery would choose to lease space at an unremarkable parking garage when more architecturally interesting and attractive alternatives abound. After all, it’s not like this garage is in some hugely traveled pedestrian corridor. 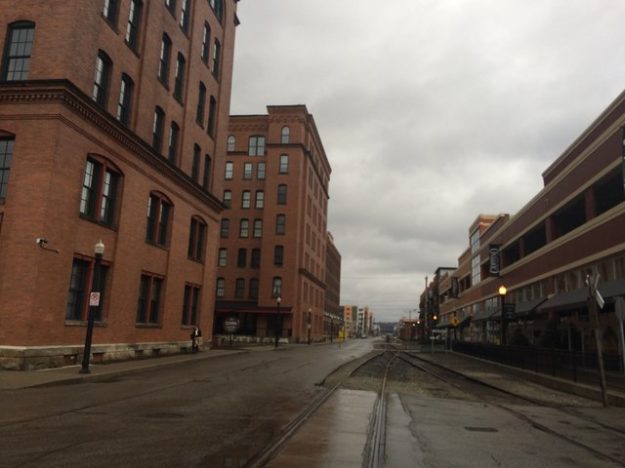 Don’t get me wrong: it’s a reasonably dense area, certainly by Pittsburgh’s standards. But it’s a parking garage. Elsewhere in the Strip District, first-floor retail serves as the pedestal for upper floors with apartments, condos and offices, all of which help engage the retail more effectively than a multi-level parking lot. At this off-peak moment on a gloomy Saturday morning, the structure hosting Cioppino is essentially empty.

But not only does the parking deck survive enough to host a successful restaurant, it’s a recent rehabilitation. As this older Google Street View image can attest, it’s not a new building, but it sat in comparative drab neglect and vacancy just a few years ago. The investor gave it a new coat of paint, a the very least.  Frankly, I’m not sure if this parking garage is a product of an extremely skillful, savvy developer, or if the neighboring uses endow the block with a synergy that elevates this otherwise unremarkable streetscape to a jumpin’ entertainment corridor at that special moment.  But—in this era of imploding retail—a success like this restaurant in a space like this parking garage defies all the odds. The commercial development industry is growing highly sensitive to the challenges facing retail, and it’s getting increasingly difficult to convince developers to build first-floor storefront space, even in tightly knit urban corridors and even though the restaurant sub-market continues to show comparatively robust performance. As a general rule, it’s nearly impossible in a medium-density city like Pittsburgh for a building this unremarkable—and with no density of tenants above it—to support much of anything along the first floor. After all, it’s practically akin to a strip mall without parking.

Time will only tell the long-term survivability of Cioppino and the garage, but if the owner, developer or property manager have a secret to their success, I hope they can share it with the rest of the real estate community across urban America.  Urban retail needs intervention.  And suburban retail?  It’s begging for complete resuscitation.

PrevSears and Whitehall Mall: the only show in town still can barely pitch a tent.
Palm tree pandemics: even in the Big Easy, winter can be a little difficult.Next

6 thoughts on “A garage where the grass is still greener.”