At aviation’s (and globalization’s) crossroads, a relic from the age of information.

As one of the busiest airports in the world—and numero uno for many years—Chicago’s O’Hare International (ORD) inevitably offers an array of amenities and services that places it well to the right of the distributional bell curve. But this feature comes as a bit of a surprise. 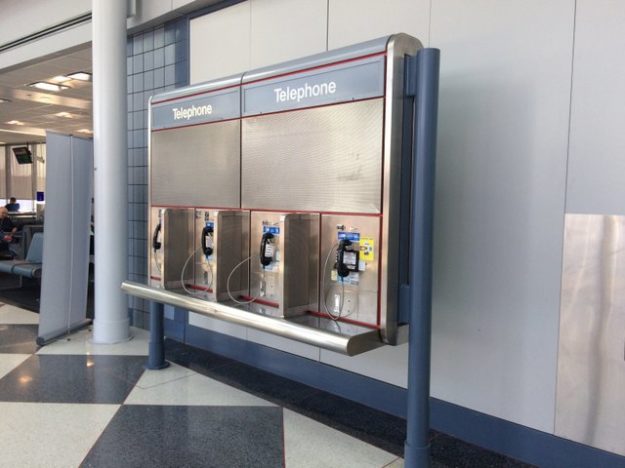 I’m probably premature in asserting that we don’t typically encounter cell phones in airports anymore, since it has more to do with the fact that I simply haven’t been looking. But has anyone else seen pay phones in an airport in the last decade? If airports actually do still feature pay phones, I’d wager that they’re tucked away in a forgotten corner somewhere near baggage claim. And probably only a single phone; not a whole row of them. Yet here we are, in the nation’s second-busiest airport (behind only ATL: Hartsfield-Jackson Atlanta International) and we’ve got a bunch occupying an important place in a busy terminal. 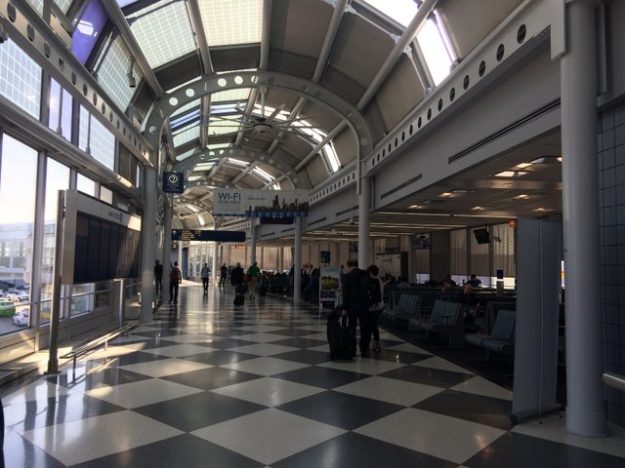 For many years, I have recognized the need to account for the lag between my own chauvinism toward a seemingly ubiquitous technological advancement and its de facto ubiquity—that is, its ability to infiltrate society at large. While I only know a few people from my generation who still keep landlines or subscribe to a print newspaper, the older generations older broadly accept both investments as a custom that they are too reluctant to abandon. Pay phones are another story. They obviously have little to do with a long-standing domestic tradition and only exist to serve those who still do not carry a cell phone. But whom does that include? Even the oldest generation has usually embraced them, if primarily because of their convenience of reaching others in the event of an emergency. Revisiting these pay phones at ORD, has there ever been a point in the last decade where four people have needed to use these phones simultaneously?

Anyone who has read my blog regularly no doubt knows what I’m hinting at here. Is the management at O’Hare falling that far behind the times? After all, it is in the best interest of an airport to monetize its space to its fullest, which, using this stream of logic, should result in a far more profitable use of wall space along a busy corridor: a vending kiosk, a shoe shine, or even just a revolving advertisement along the wall. I explored the latter of these three options on this blog (and the blog Urban Indy) when it became clear that Indianapolis International Airport (IND) was saturating every square inch of available wall space with advertisements, which I attributed at least in part to the reduction of passenger traffic and continued consolidation of major airlines in the wake of the Great Recession. The airport authority needed to generate revenue in some new fashion.

I could easily flog ORD’s leadership for its failure to replace these phones, but, once again, it’s premature to jump to such conclusions. One consideration: ORD caters to such a vast array of international travelers, including some individuals from countries where mobile phone ownership may be less widespread. So it is possible that these pay phones serve a limited but critical submarket: foreign travelers who either lack phones or do not wish to pay roaming charges and would rather make a quick call by inserting a quarter. This hypothesis remains far-fetched though: first, this pic and these pay phones do not come from the international terminal at O’Hare. Secondly, most international travelers are affluent and tech-savvy enough that they will both own phones (even if from a highly developing country where cellular networks are deficient) and will understand the costs and benefits of roaming or SIM cards. Lastly, cell phone ownership is normal globally; even in the poorest nations, companies like Apple, Nokia or Samsung (or many other brands that don’t even have a US presence) have found a means of reaching the broader market, including moderate-income households.

So I think that first hypothesis is a bit of a stretch. My second hypothesis is cruder but probably more realistic: that ORD is and has remains such a busy airport over the years that the vicissitudes of the airline industry (and the global economy) have not affected its passenger rates as radically as smaller airports in the Midwest, like IND. In fact, IND has weathered the changes fairly well, since it was never a prominent airport to begin with. Conversely, Cleveland Hopkins (CLE) and Cincinnati/Northern Kentucky (CVG) have experienced catastrophic losses in passenger traffic over the years, losing their prevalence as regional hubs after airline mergers. CVG even had to close and then demolish its entire Concourse C. Needless to say, these airports have required pro-active management to wring profitability out of increasingly cavernous and superfluous real estate. O’Hare was able to remain a bit more complacent, so something as minor as a row of minimally used pay phones is an afterthought…like a fizzled light bulb on the Las Vegas Strip.

7 thoughts on “At aviation’s (and globalization’s) crossroads, a relic from the age of information.”