Palm tree pandemics: even in the Big Easy, winter can be a little difficult.

Many years ago I wrote an article exploring how trees of the palm family are widespread throughout southern Louisiana (specifically the New Orleans region), though they are not indigenous. In other words, they grow there quite easily but it is not their native habitat. If anything, the presence of palms in the southern US—or at least the southeastern US north of Florida—is a human initiative prompted by our cultural affinity for these trees, since they almost universally symbolize the tropics and the warm, agreeable climate. As soon as passengers land at the Louis Armstrong New Orleans International Airport (MSY) and leave the terminal, they will encounter a variety of pygmy date palms, queen palms, sagos, cycads…you name it. And they love it.

But, comfortable though the trees may be in the humid subtropical climate, it is more a region where they survive. But not thrive. I asserted their presence in that old blog article, and, much later (February of this year), I provoked an interesting reader response, Though not without its valid point (namely, that many tropical and subtropical plants are far more versatile and adaptable than we often expect), the respondent also asserted that the North American climate is nowhere near as diverse or cold as I assert it to be. Our respondent, “Declan”, argued that “to fret over ‘bitter cold snaps’ in Louisiana is again another function of American delusion when it comes to the environment they live in.”

While Declan is fully entitled to his vitriol, his belief that Americans tend to overstate the coldness of their climate doesn’t necessarily hold up to evidence, at least the empirical variety, which is the specialty I have cultivated for this blog. Yes, Canada is colder. But the states north of the Mason-Dixon routinely get chillier winter mean temperatures than basically anywhere in Europe, including the Nordic countries (even Iceland).

Those cold snaps are hardly unique to the part of the country that calls its fizzy drinks soda (or pop). Meanwhile, “Coke country” can get many, many standard deviations below its mean temp as well, despite falling within a climate zone largely classified as humid subtropical. A recent trip back to New Orleans clearly bore this out. 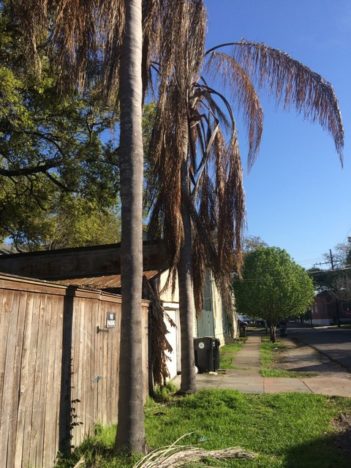 During my first night in town, I noticed that various tropical trees looked pretty zapped throughout the French Quarter. Though I didn’t get any good daytime photos of the Quarter, I found that the condition was hardly isolated to one part of town. Notice the trees below, in City Park a few miles away. 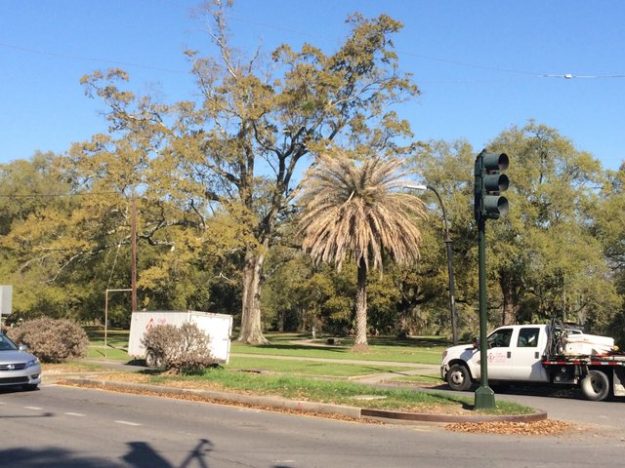 At first I thought it might have been the product of a recent flooding or storm surge, in which saline or brackish water intruded upon soil that typically only receives fresh water, thereby placing certain, less adaptable tree species into a state of shock. But nothing of the sort happened. In all likelihood, these trees are dead. 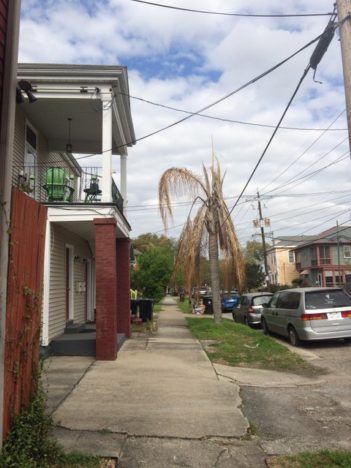 In the beginning and again in the middle of January 2018, metro New Orleans received some of the coldest weather recorded in the city’s history. Right after locals toasted with their spiked egg nog and watched the big gumbo pot drop, the city’s average temp tied the 1970 record for the coldest first week of the year, at 39.6°F, caused by a polar vortex, according to local climatologists. Less than two weeks later, MSY measured 20 degrees on the 17th of the month, breaking a previous record of 23° for that day, back in 1977. Pipes in the city’s lightly insulated homes froze, and the streets were replete with ice and light snowpack, resulting in particularly hazardous conditions for the unaccustomed motorists. While the temperatures across most of the southern half of the state edged above freezing later that day, they quickly lurched back into the 20s and even teens that next night, resulting in some subzero wind chill temps as far south as the small city of Hammond. The blistering cold continued through the 18th of January.

As evidenced by the photos, palms and other tropical plants from family Aracaceae took a real beating. 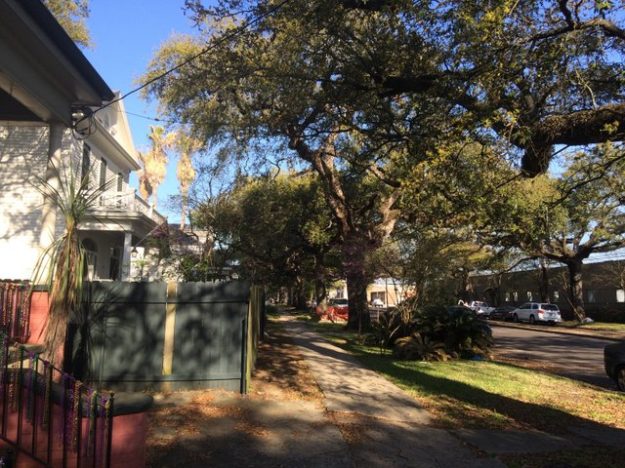 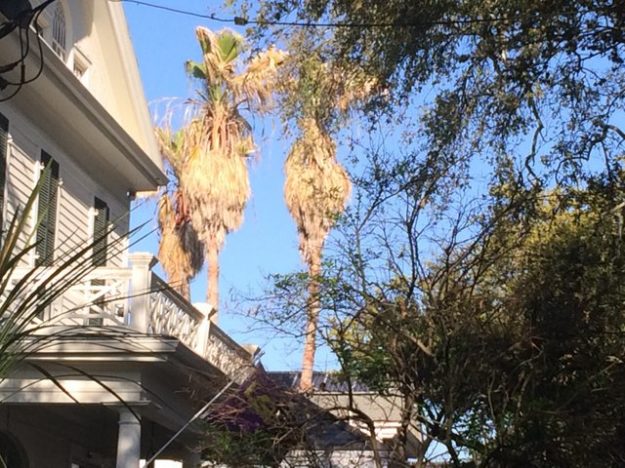 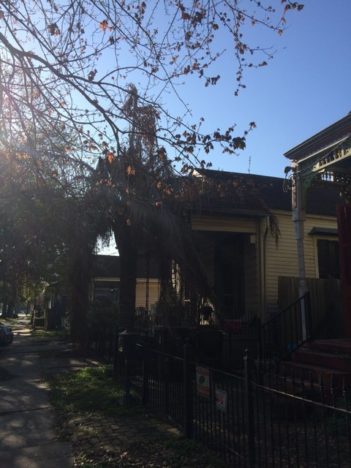 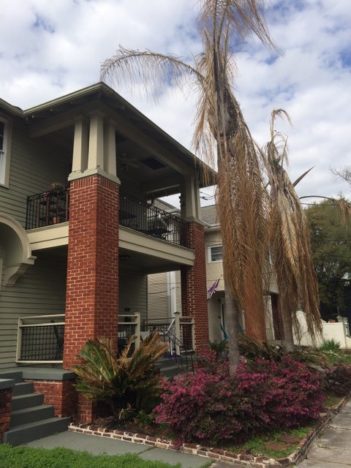 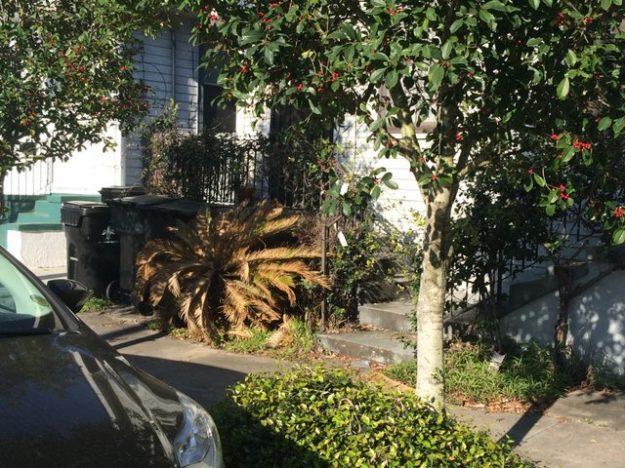 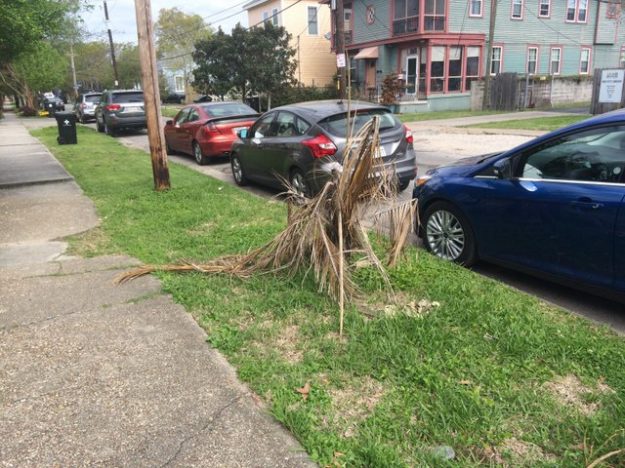 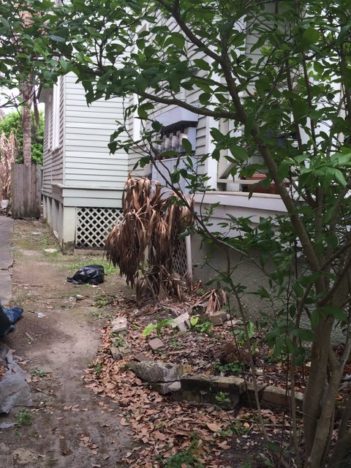 Fortunately, some managed to hold it together. 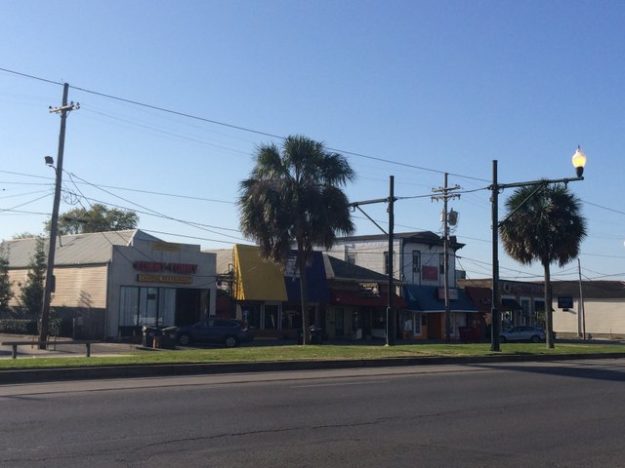 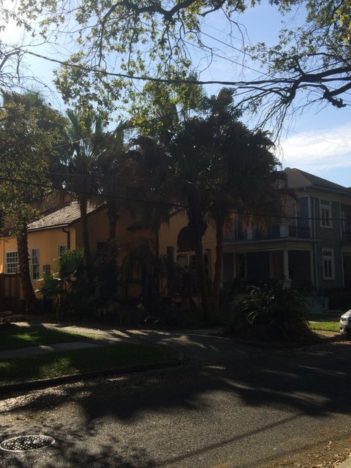 I’m not an arborist, so I’m not going to attempt to speculate the species distinctions that allowed some palms to endure while others didn’t. It may have something to do with soil conditions, or proximity to other trees, or heat emitted from buildings, or even dumb luck. Regardless, it was obvious that a disproportionate number of palms succumbed to the cold.

In early March, when I was in town, the prevailing sentiment was cynical, but a glimmer of hope remained: just a few weeks prior, local media was advising property owners on how to resuscitate their palms. (Contrary to popular belief, wrapping them in plastic often has a deleterious effect.) But by Palm Sunday, the game was up: churches were facing a shortage of the traditional queen palms and had to make do with the heartier sago palms.

There’s nothing too profound about this predicament facing a city famous for retaining much of its verdure throughout the winter. It only proves that tropical plants are not indigenous to this subtropical region and routinely face hardship when confronted with temperature extreme that are unheard of in, for example, Jamaica. Or coastal Hawaii. Or (I’m guessing) even southern Florida. Notice the contrast with another signature New Orleans tree, the live oak, which seems to have managed the punishing January weather just fine. 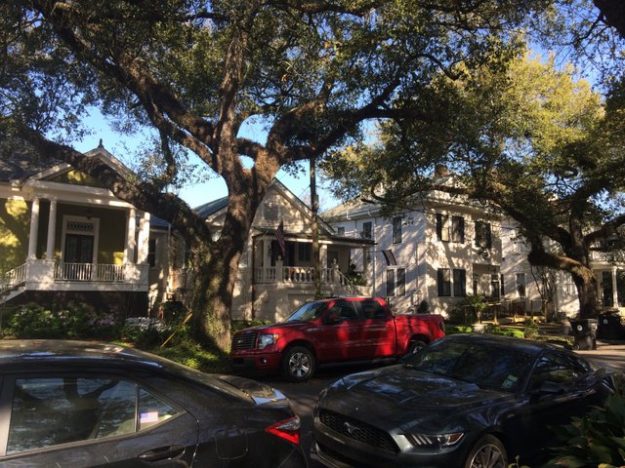 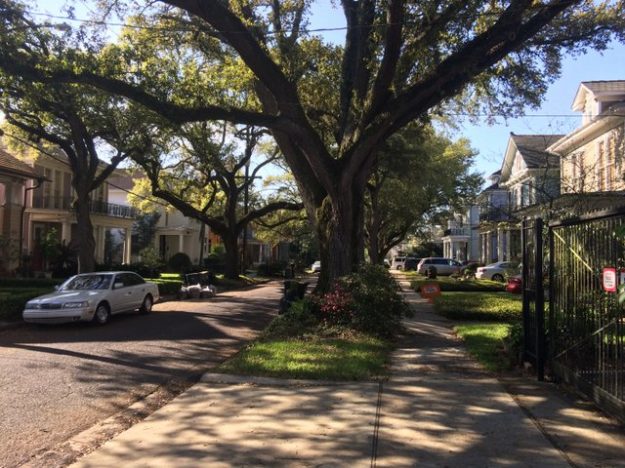 Clearly, thanks to those live oaks, New Orleans still boasts some of the most remarkable tree canopy you’ll find in an American city. The devastation of Hurricane Katrina a decade ago took out tens of thousands of trees, yet only the locals would ever be able to tell. That said, a city as renowned for its tourist industry as it is for its distinctive appearance—the two go hand-in-hand—is apt to budget a higher-than-average amount for restoring palms along its key public boulevards and grassy neutral grounds (medians), despite the trees’ relatively high mortality rate. 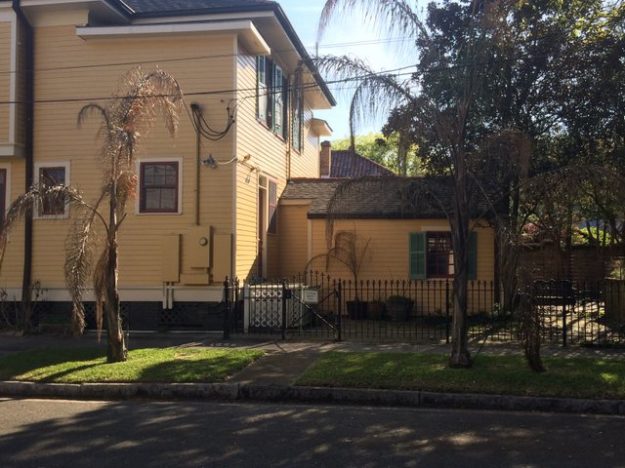 And I suspect the homeowners will follow suit, cutting down the dead palms and promptly replacing them. It’s part of the collective buy-in that comes with living in a city which, despite its socioeconomic, cultural and climatic challenges, still prompts a disproportionate number to slap stickers that say “Proud to Call It Home” on their rear bumpers. Even if the mostly (but not always) sultry climate results in annual ravages of termites, buck moth caterpillars, chiggers, and flying cockroaches. Such is the price you pay when you live in the City That Care Forgot. Such is the price you pay when you live in the tropics, too—but at least you get those palm trees. And, beyond just those cold snaps that happen far more often and yield considerably greater impact than Declan would care to admit, New Orleanians have to contend with a mean little thunderstorm now and then.

PrevA garage where the grass is still greener.
The stick-built home isn’t always the flimsiest.Next

28 thoughts on “Palm tree pandemics: even in the Big Easy, winter can be a little difficult.”