Worcester Plaza: a green oasis surrounding by “No Trespassing” signs.

We often judge a city’s economic health or malaise by the condition of the built environment—the visual evidence of concentrated investment in real property. Are the buildings new? If not, have the owners renovated recently? Do the buildings get larger and more closely packed together when approaching the city center? There’s certainly nothing wrong with asking these questions and forming judgments based on the answers. But sometimes it’s more revealing to scrutinize regional economics by what isn’t happening. And neglect is the most predictable incarnation of disinvestment, whether in the form of a building falling into disrepair or an unmaintained vacant lot. Those, at least, are the far more obvious examples. Sometimes the real indicators are a lot subtler. Perhaps the best evidence of a serious problem—a persistent struggle with weak economy and investor shyness—often comes in poor real estate strategy, or its complete absence.

Worcester, the second largest city in Massachusetts, has long sat in the shadow of the state’s capital 50 miles to the east. By population, it is the second largest city in New England (behind only Boston), but we’d be hard-pressed to find anyone who would claim it’s the region’s next most prominent city; it has nowhere near as high of a profile as, say, Providence RI or Hartford CT. These latter two cities also feature more active downtowns: Hartford boasts a disproportionate concentration of prestigious jobs in insurance and finance, while Providence claims a business district that has revitalized through cultural and historic attractions, reinforced through a humming residential apartment scene. On the other hand, Worcester has a long way to go. 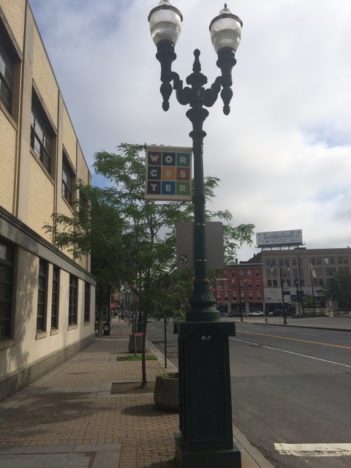 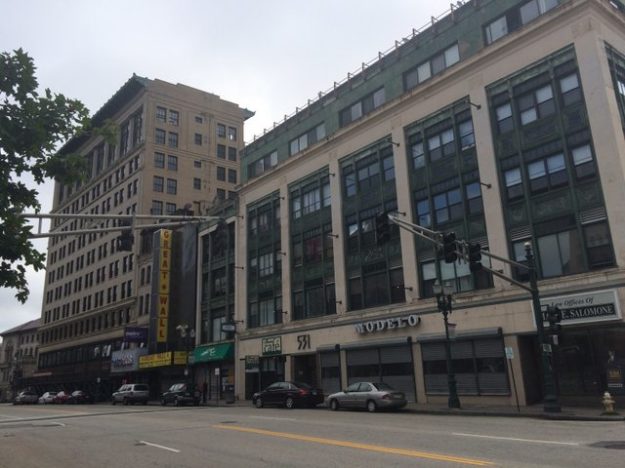 The central business district offers plenty of handsome 19th century buildings, but an equal number are languishing with high vacancy levels, and, on a hazy summer Saturday morning, nary a soul was out and about. And last year I covered downtown Worcester’s notorious Midtown Mall, which remains to this day the single most unsightly enclosed shopping plaza that I have experienced firsthand that still retains at least a handful of tenants. (Fortunately for downtown Worcester, the City is considering eminent domain to force redevelopment of this foul-smelling property after the recalcitrant owner has rejected previous offers.)

But perhaps no better indicator of disinvestment or (perhaps even worse) poorly planned investment is the following not-so-little pocket of green space, visible in the foreground of the photo below. 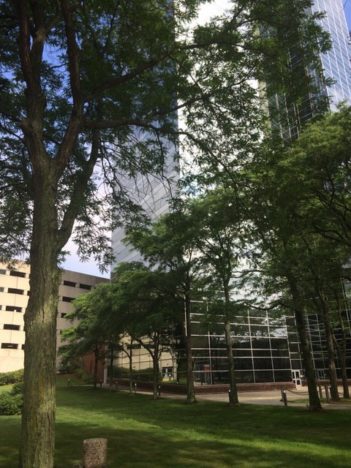 It’s hardly an ugly patch of green, and the owner clearly trims the shrubs and mows the lawn. But the manner with which the property engages with its surroundings is underwhelming, to say the least. We can presume it serves the high-rise commercial building in the background, known as Worcester Plaza. In fact, there’s not much of any other option. The hardscaped pathway leading to the main entrance of the high-rise allows access to the greenery, but any other approach clearly discourages pedestrian access. Here’s the view from neighboring building on the other side of the green space: 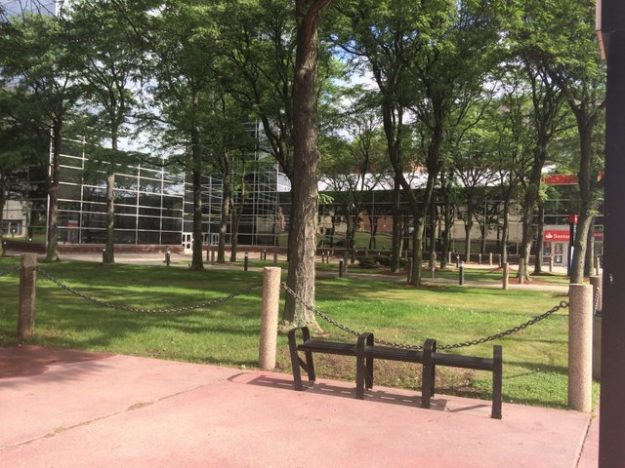 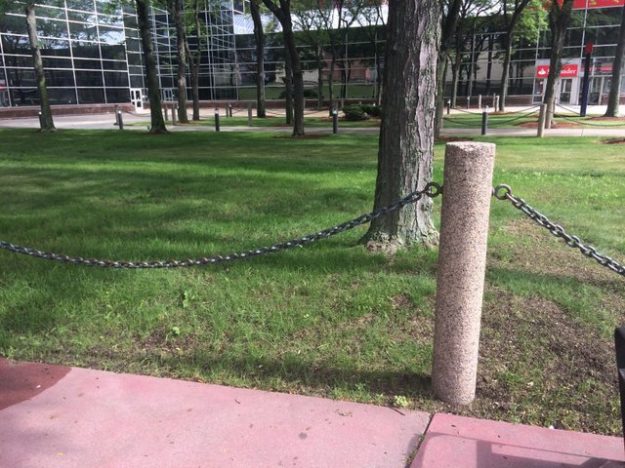 The stanchions and chain get the message across, along with an uninviting, broken bench serving as more of a barrier than a place to sit. But that’s not the least of the hurdles. 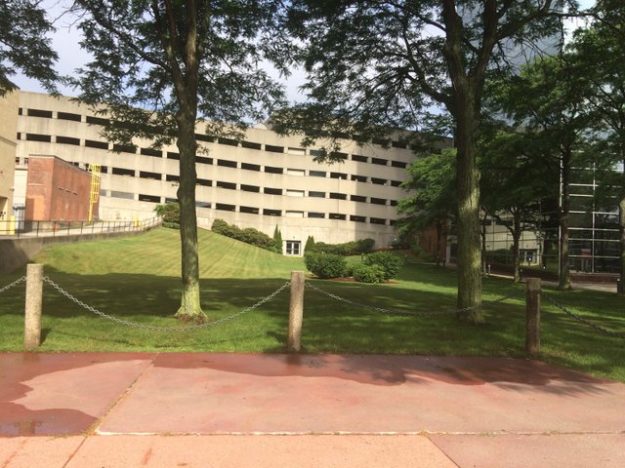 This view from Main Street shows that the pocket of green space is essentially off-limits to pedestrians walking by, unless they have a direct affiliation with the businesses in Worcester Plaza. But even more problematic is the feature in the background: a parking garage with a pedestrian entrance. Judging from the path network, the garage serves the high-rise, but due to its configuration, the parcel with greenery lacks any rear right-of-way: no alley or loading dock.

The configuration of the buildings—Worcester Plaza and its associated garage—leave this parcel hemmed in. It’s not an inviting place, as verdant and well-shaded as it may be, and the building on the opposite side from Worcester Plaza clearly has had to use this lack of a back alley to create a loading dock all on its own… 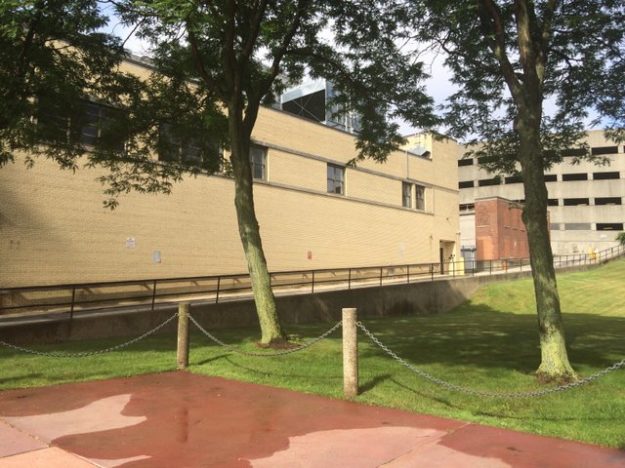 …with access from the primary street. Not only is it unsightly for people using the green space (if anyone ever uses it at all), but it clearly functions as more of an afterthought: the residual land after the development of the high-rise and its massive garage in the back. If land values in downtown Worcester should ever improve, this parcel might be highly attractive for development; after all, it sits directly across from City Hall, in the center of the center. But the unusual slope, the pedestrian pathway from the high-rise to the parking garage, and the difficulty in integrating service vehicle access are likely to kill it. The surrounding development has rendered an acre of land on the Worcester Plaza “campus” nearly useless. Understandably, one could argue that we should hesitate to dismiss a pocket park, an grassy oasis in a heavily paved-over city center. While in most respects that would be true, bear in mind this sliver of green has no benches, no fountains, and no trash receptacles. It clearly does not encourage public use. For the sake of improving the tax base of Worcester, the land is hardly living up to its potential, but perhaps that is what we can expect from a long-underachieving downtown.

Quite some time ago I wrote an article where, even in the title, I postulated that a sluggish economy encouraged poorly conceived design. My example was a prominent corner in a revitalizing older neighborhood in Indianapolis, where, prior to the Great Recession, an uninspiring low-slung commercial/warehouse building was preparing for demolition to transform into a mixed-use condo/retail structure, built flush to the corner. Then the economy tanked, the urban condo market collapsed completely, and, within two years, the plans changed: the developer merely took the old commercial building and cladded it with windows to transform it essentially to a strip mall. It was a huge disappointment for the area, but reflective of market forces at that time, which simply couldn’t support the condominium project.

Worcester offers a different set of circumstances arriving at the same conclusion. I’m hardly going out on a limb by speculating that the planning for Worcester Plaza—tied with one other building for Worcester’s tallest—came at a time when the economy for central Worcester showed little hope of a renaissance. Construction at this prominent quarter probably required the demolition of some century-old buildings, but their advanced state of neglect in 1974 made any effort to salvage them seem quixotic. Why bother, when a much higher investment was about to replace them? Land values at the time, however, were so low that the developer and architects for Worcester Plaza didn’t even need to consider good urban design principles; little to nothing was at stake, and clearly nobody devised a long-term vision for that fragment of greenery. I’ll concede that the affiliated parking garage could have been worse; at least the primary entrance fronts a side street. (It’s marginally better than this eyesore in neighboring Bridgeport, CT.) But the majority of the massing still addresses another street rather than the block’s interior; here’s the Google Street View from the back end.

These Worcester photos date from last summer. Nearly a year later, and I suspect we could find mounting evidence that a revitalization is underway for Worcester’s downtown. I also we could dredge up equal evidence that the city’s cheerleaders have been predicting this verge of a renaissance for years, if not decades. A rosier economic climate may soon greet the local real estate development community, but the minds behind Worcester Plaza (which may include the Pritzker-winning architect Kevin Roche) can hardly take much credit. Let’s hope the next building over 10 stories to grace Worcester’s downtown finds a smarter way to stake its claim on an increasingly valuable patch of land.

PrevTwo lanes diverge on a road, and I took the time to blog about it.
It takes more than an Old Line to draw the Lone Star.Next

3 thoughts on “Worcester Plaza: a green oasis surrounding by “No Trespassing” signs.”