It’s not hard at all to see how housing has evolved over the last century, especially when we visit the residential areas right next to a city center and compare them to the ones a few miles further out in the suburbs. Far more difficult is the distinction between homes from the 1980s and those under construction today. But it can be done, and sometimes the best way to discern these subtle changes is when multiple generations of housing are lumped all together, like they frequently are in Alexandria, Virginia. 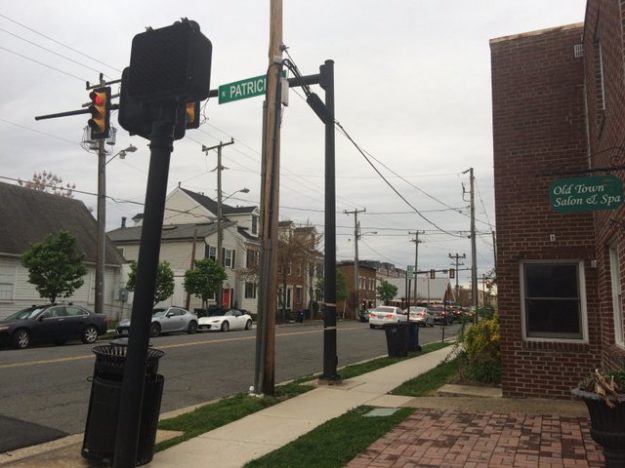 This old and fortuitously well-situated city is best known as part of the expansive northern Virginia suburbs of Washington DC, right across the Potomac River. But the settlement that eventually became Alexandria predates the nation’s capital by a good 120 years. Even after the establishment and implementation of Pierre l’Enfant’s Plan, across the river and a few miles north (under the supervision of President Washington), Alexandria continued to enjoy moderate growth as a small city on its own right. Today, the historic Old Town of Alexandria is one of the most prestigious and attractive areas within the entire metro, featuring a host of shops and early- to mid-19th century housing in a tightly wrought, walkable grid.  (Most of this article’s focus will center on a single block fronting the arterial Patrick Street on one side, as featured in the photo above, all just a quarter-mile north of Old Town.)

Only in the mid-20th century did Alexandria’s population explode, quintupling since World War II and expanding to meld with the suburban areas in adjacent Fairfax and Arlington counties. Though historically a community of attached and detached single family homes, such is no longer the case: its proximity to the jobs in downtown DC, the Rosslyn and Clarendon districts of Arlington County, as well as its own nodes at various stops along the WMATA metro line—all have elevated Alexandria to a flourishing city of more than 100,000 inhabitants, with numerous multifamily apartment and condominium buildings, especially closer to the river. This surge has largely eschewed the protected Old Town, with the majority of multifamily, midrise structures sprouting up to the north. And since the river and heavily built neighboring communities leave Alexandria hemmed in, the old and new housing have no choice but to stand cheek-by-jowl.

Here’s some of the more traditional stuff, which comprises the vast majority of Alexandria housing in Old Town: 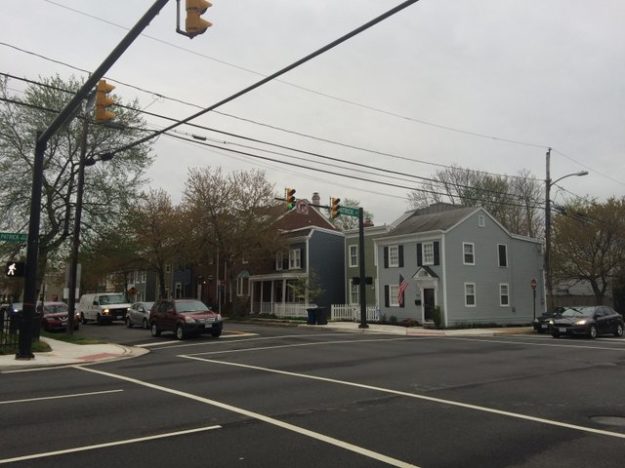 But here, on a single block about a half-mile north of King Street (Old Town’s primary commercial corridor) is housing unmistakably from two time periods. 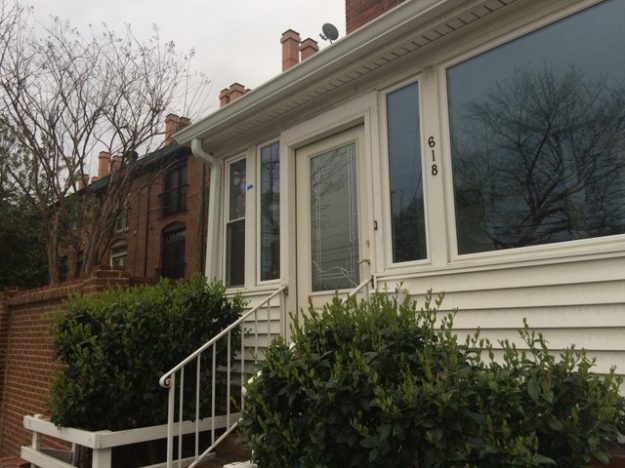 In the foreground, although not likely antebellum (we’re not in the historic center of Alexandria here), we see a home that may still date from the early years of the 20th century. Wood frame, tightly situated on a narrow lot, and directly fronting onto the sidewalk—just like the other homes on that half of the block. 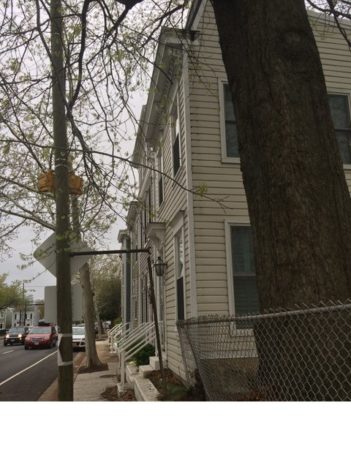 Now return to that earlier photo, with the two housing styles. Check the homes in the background with the brown bricks. Let’s zoom in a bit closer. 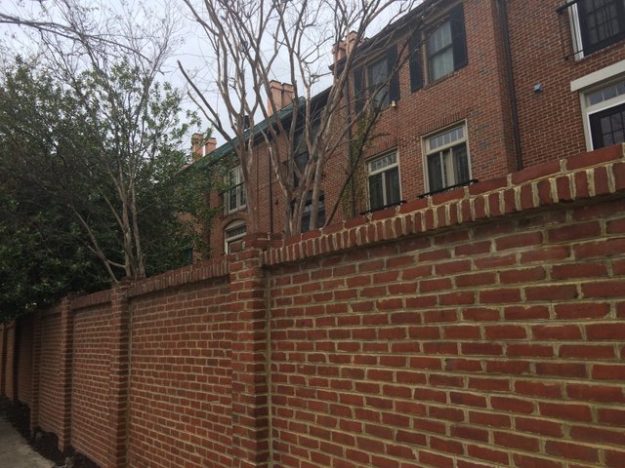 We really can’t see anything from the street level because a heavy wall blocks the view. And it continues that way to very end of the block. 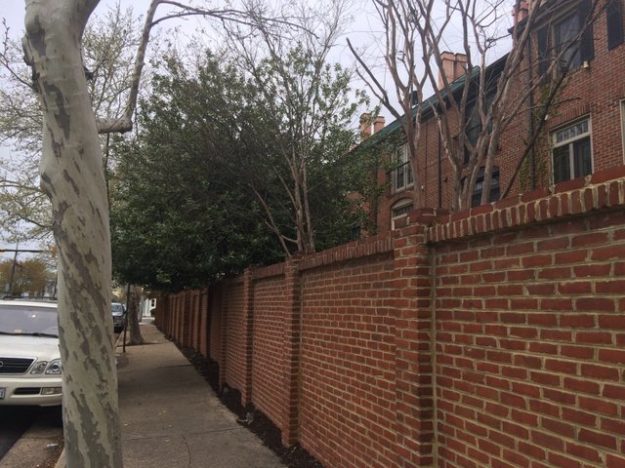 The online Alexandria Office of Real Estate Assessments states that the homes were all built in or around 1979—approximately a half-century later than the wood-frame homes right next door.

While the two eras of housing reveal obvious distinctions in height, material and ornamentation, they are nowhere near as interesting as the way the structures occupy their lots. The older homes have a design that treats the city street as a welcome mat; it serves as the primary entrance, for both guests and the inhabitants. These homes feature no curb cuts; if they have garages, they are tucked behind, accessible only through an alley. Their form complies with the conventions we expect from metro D.C.’s older neighborhoods.

Then there are the brick townhomes right next door, which, as we see from this Google Street View at the next corner, offer nothing to look at for the passers-by on Patrick Street, pedestrian or vehicular. The only curb cut is along Pendleton Street, a less traveled local road. Everything else gets the wall. 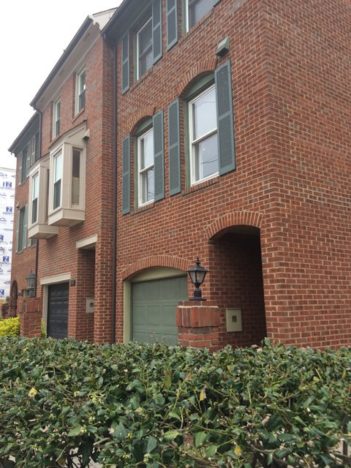 The hedge in the foreground is a bit misleading; these three townhomes are plainly accessible by the street, as seen here. But they’re the only ones. The remainder of these townhomes has another entrance: the back alley. 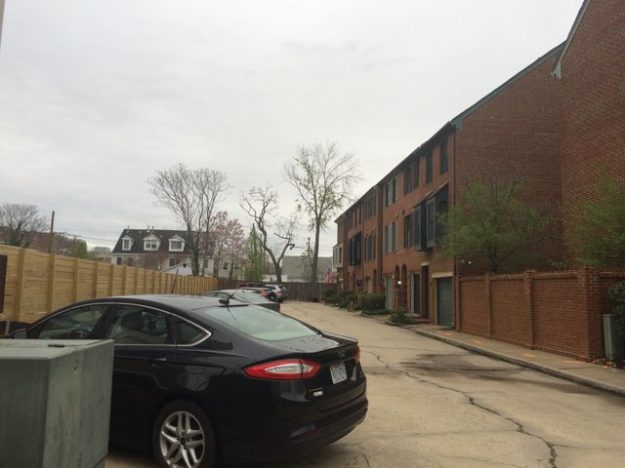 In other words, the developers in the 1970s either demolished older housing (like the wood-frame homes) to build a series of fortified townhomes, or they took a vacant, underdeveloped lot and made the next move. Regardless, they determined that the market for housing in Alexandria at that time skewed more toward privacy and enhanced safety, so most residents of these townhomes get a walled-in yard, whereas the wood-frame houses view the sidewalk.

Why such a carceral approach to urbanism in 1979? Unfortunately, it may have to do with the neighbors across the street. 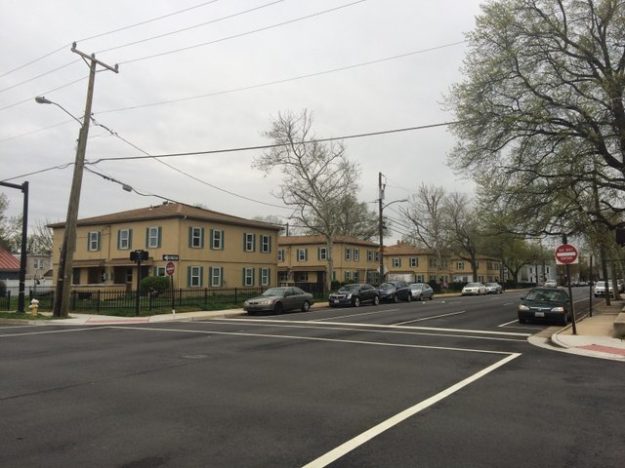 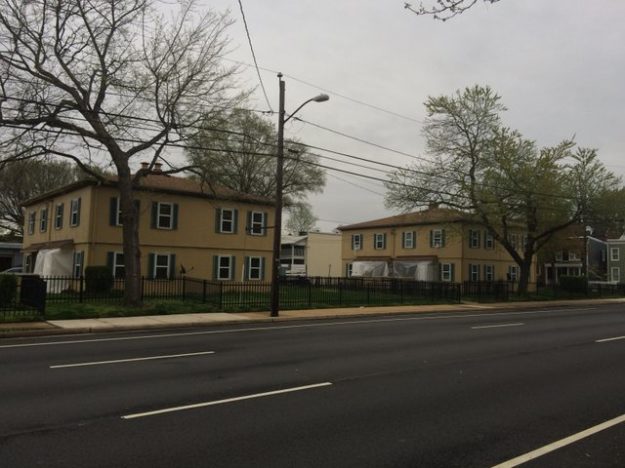 These low-slung quads may not look like much, but they carry the telltale architectural indicators of early federally funded housing: spartan aesthetics, generous courtyard space, uniformity. Indeed, they belong to the Arlington Redevelopment & Housing Authority (ARHA). In other words, these structures had long functioned as relief from the generally high housing costs throughout metro D.C, having first accommodated African-American defense workers during World War II, an era in which de jure segregation prevailed. In the 1970s, when the vast majority of home starts in Alexandria were taking place in the more auto-oriented areas to west of Old Town, the perception was that any housing catering to low-income people was riddled with crime. The only way for townhomes across the street from a public housing complex to remain marketable in 1979 was to close them off from the outside world as much as possible. It may have been the only viable way to construct market-rate housing in this older part of town—no doubt a lot less bustling than it is today (since most walkable old neighborhoods were declining in the 1970s). The brick wall served as both a socioeconomic and, I suspect, a racial barrier that remains firmly planted a generation later, though the presence of this wall also leaves this strip of houses as an outlier in a generally human-scaled district of Alexandria.

Fast-forward another generation, and the urban form has softened somewhat. On that same block as the brick wall, fronting the corner of Pendleton Street and North Henry Street, we encounter a new cluster of townhomes under construction. 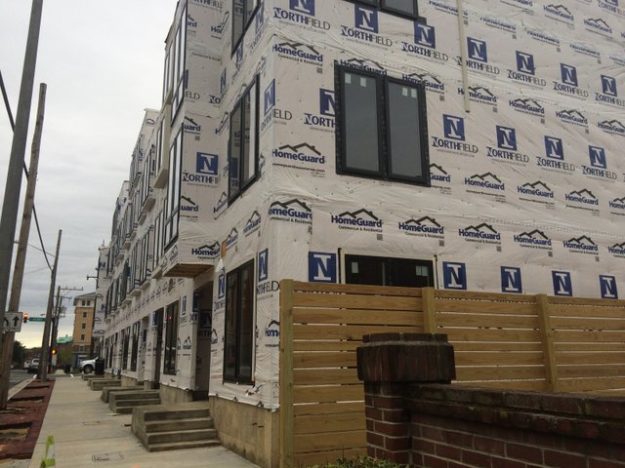 Unlike the 70s incarnations, these feature a stoop-like set of stairs right on the sidewalk, affording the residents less privacy from pedestrians. 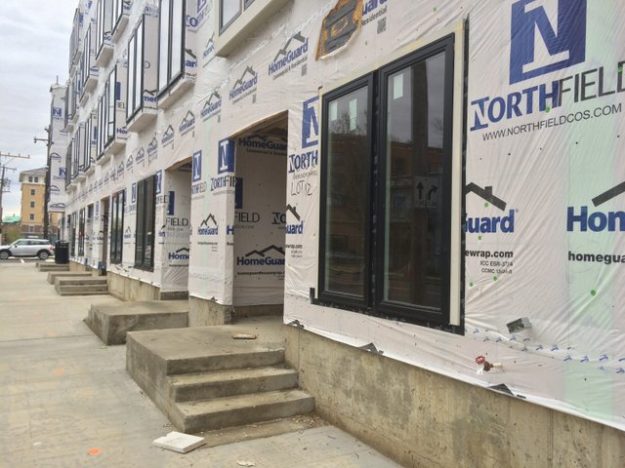 But perhaps that’s the whole point. These new structures still have garages in the back… 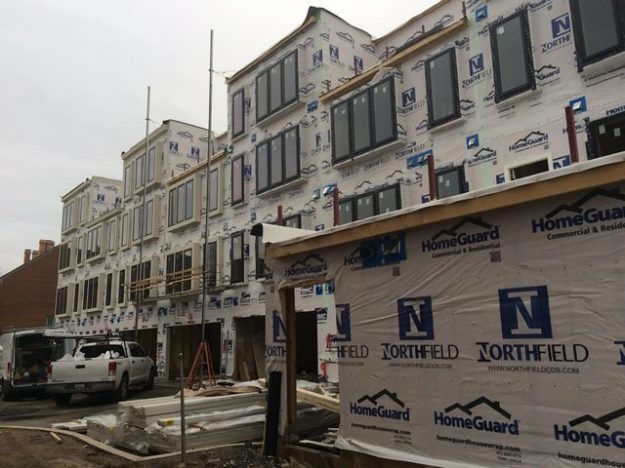 …but the fundamental orientation is toward the city street. Another set of townhomes went up in 2017 and largely duplicates this arrangement, visible as we turn a corner. 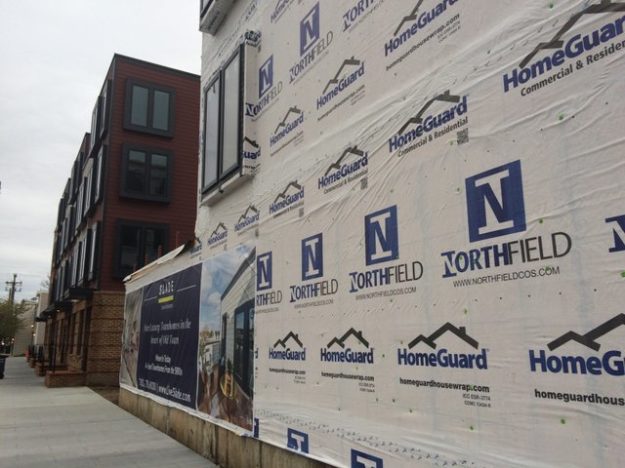 Meanwhile, across the street, some slightly more mature multifamily housing reveals the escalating cultural acceptance for high-density and mixed-use in an area that used to be dominated by single-family homes, like the one in the foreground. 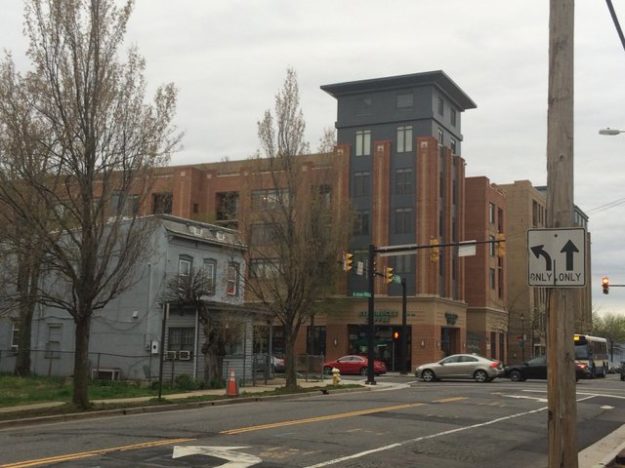 The five-story structure in the background likely would have ruffled feathers in 1979, if there had even been a legitimate clientele for such a housing type. These days, housing demand in Alexandria is so great and land values so high that developers have no choice but to build upward at a higher FAR to achieve a return on their investment. The encroachment of high-density housing is visible all around our block in question. Just look at Patrick Street, immediately to the north of our walled townhomes: 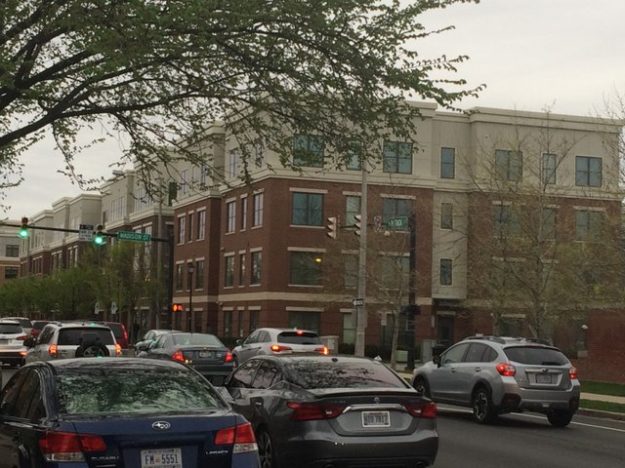 As is typical of the newer construction, we see no brick wall and plenty of windows right along the street? And what stands directly opposite this four-story structure? 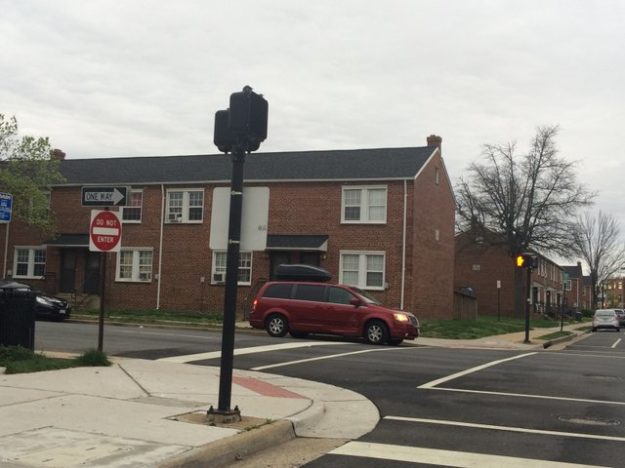 More affordable housing from a half-century ago. As attitudes toward low-income housing have relaxed, the barriers have come down. Quite a contrast from the streetscape that has served as the focus of this article.

I’m not faulting the builders or occupants of the 1979 townhomes. The approach surely seemed like the only viable method to sell real estate at that point in time. But, since very little new housing places so much emphasis on defensible space (or, at the very least, it finds subtler methods of achieving it), one can question if the 1979 approach is actually less marketable by today’s standards. No doubt some people appreciate the privacy of small front yards. In a nation as suburbanized as the US, the general demand, outside the Northeast, for homes with zero lot lines is quite low. But the absence of a discrete façade—where the only real entry is immediately next to a garage door—means the residents (and their visitors) have little other option but to approach their homes through an alley. And the public housing across the street has grown increasingly innocuous. 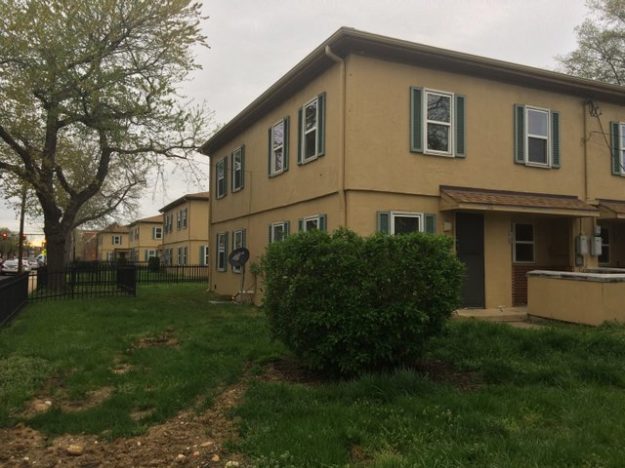 If you can’t already tell, these aging, mustard structures are sitting in a mothballed state. Here’s the sign out front. 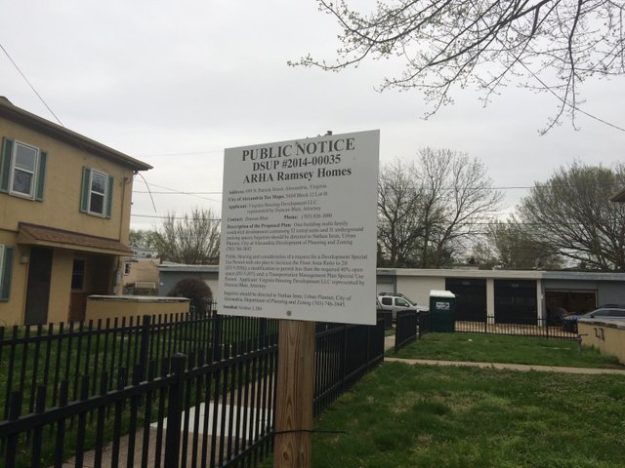 Plans are to demolish the Ramsey Homes and, according to a Post article (now a bit on the old side), eventually they’ll get turned into more multi-family housing: a 52-unit structure, again adding considerable density for a part of town that clearly supports it. And a sizable portion will remain affordable, since the City of Alexandria requires a unit-for-unit replacement, when an affordable development gets torn down.

The continued metamorphosis of this city is making the brick townhomes from 1979 increasingly seem like a relic. I’ll concede that most municipalities can’t claim Alexandria’s convenient location, wedged between some of the nation’s wealthiest counties and the beneficiary of a slew of lucrative jobs tied to Department of Defense contracts. Elsewhere, the sort of high-density infill that has engulfed Alexandria in the last 20 years would face zoning challenges, rampant NIMBYism, and, eventually, a real estate bubble. But metro DC generally dodged the bubble (and the bullet) that choked the rest of the nation back during the Great Recession, and there’s no evidence, even during an administration committed to “draining the swamp”, that the demand for one- and two-bedroom residential units is going to abate. Job growth is still plentiful. Therefore, Alexandria affords us a rare privilege: the ability to explore nearly 150 years of housing typologies over the course a five-minute walk. And most of it is charming to look. With a few exceptions.