A few days ago, the news of yet another department store’s demise flooded the headlines of business journals across the country. As well it should. For the retail industry, this is an announcement with devastating impact. On the heels of the liquidation of Toys ‘R’ Us, the bankruptcy of the Pennsylvania/Wisconsin-based Bon-Ton Stores, Inc., will result in the elimination of nearly 60,000 retail jobs, between the two titans. The world’s largest toy store mostly occupied freestanding big-box operations or the primary anchor in a strip mall flanked by smaller in-line tenants. Bon-Ton, on the other hand, was a fixture among malls. Its closure means that hundreds of malls will lose one of their anchor tenants. By the middle of this year, it’s not unreasonable to assert that at least one-third of malls in America will suffer at least one vacant department store, with no prospects of replacement among the handful of surviving retailers…because they’re all struggling too.

While the news is no great surprise, it’s still alarming how little reaction it has generated. Bon-Ton Stores, Inc., may be the country’s largest retailer that relatively few people have heard of. As recently as 2016, it claimed 267 locations, mostly in the Midwest and Mid-Atlantic states, though only about half operated under the Bon-Ton name, particularly concentrated in Pennsylvania. Like its higher profile cousin Macy’s, Bon-Ton Stores engaged in aggressive acquisition of other names during the early 2000s, when such a practice was fashionable. Unlike Macy’s, which eventually consolidated its entire portfolio, Bon-Ton retained the names of the smaller regional brands: Carson’s (formerly Carson Pirie Scott), Bergner’s, Elder-Beerman, The Boston Store, Younkers, and Herberger’s. The black, brush-stroke typeface and red floret logo unified these formerly discrete department stores.

The biz has underperformed for many years, but it never achieved the sort of press coverage we have witnessed with Sears, JCPenney, and Macy’s. Nasdaq delisted the company at the end of 2017, after its share price dropped below $1 for more than 30 days. Earlier this year, it announced the closure of 45 stores—including the location of downtown Indianapolis’s Circle Centre Mall, which I covered for Indianapolis Monthly—but that didn’t prove sufficient. Now it’s folding completely, eliciting what seems like a collective shoulder shrug across most of the country (mall property managers notwithstanding).

So what’ll it be? Is Bon-Ton’s closure a big deal, or just another casualty amidst the retail apocalypse? I’d equate it to a relatively minor earthquake with an epicenter in a fragile region, kind of like if the New Madrid Seismic Zone ever tremors again, leaving the impoverished Missouri Bootheel and Cairo, IL in shambles. The Bon-Ton has a huge presence in Pennsylvania, but it’s not a very familiar name in Philadelphia or Pittsburgh. As I noted a few weeks ago in the Indianapolis Business Journal, the reality is undeniable: this second-tier company has made second-tier cities its primary business model. The Bon-Ton Stores, Inc. has typically left the top-tier malls in big cities (cities the size of Indianapolis or bigger, which only had the single Carson’s location) to the major players like Macy’s and Penney’s. It tended to focus on smaller metros or even semi-rural micropolitan regions that still were big enough to support a regional mall.

Bon-Ton Stores, Inc. brands typically locate in beta or gamma cities (or delta or epsilon), and while this isn’t a surefire indicator of failure, it’s a bit telling that, in Pennsylvania, they’re commonplace in Allentown, Scranton, Reading, Lancaster, Williamsport, Pottsville, and so forth. Many of the cities themselves are still steeped in economic stagnancy after the loss of their big industries. Even in the larger, more successful of those regions (like Allentown), Bon-Ton is typical of the “other” mall: the low-wattage one.

As recently as the early 2000s, the Bon-Ton’s model probably seemed airtight: locate in the less lucrative mall that helps capture the smaller population nodes for people unwilling to travel. But these days, people are far more open to a 40-minute drive to the higher-performing malls, often owned by Simon Property Group, the nation’s largest mall manager. Why drive so far? It’s simple: more often than not, the other 2 or 3 malls closer to them are just too lifeless to be worth even a short trip.

Let’s take a trip to Pennsylvania—specifically to the Lehigh Valley metro (Allentown/Bethlehem/Easton) to see how this plays out. 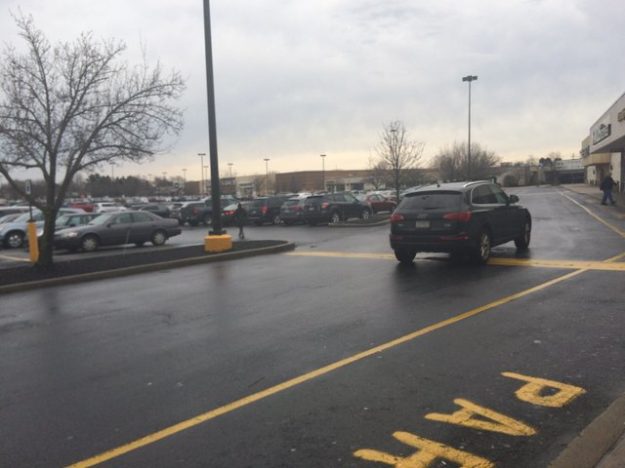 The reigning champion in the metro is the Lehigh Valley Mall, owned by Simon Property Group and generally performing at an A level or close to it. But five other, smaller malls in the Lehigh Valley region host Bon-Tons as well: South Mall (near the border of Allentown and Emmaus), Palmer Park Mall (just outside Easton), Westgate Mall (in Bethlehem), Phillipsburg Mall (across the river in Phillipsburg NJ) and The Shoppes at Trexler (near the borough of Macungie). While none are top performers, I can at least assert that Palmer Park and Trexler have held themselves together adequately enough. The other three are dying. With this announcement, it’s safe to assume that least one will probably close altogether.

But let’s explore one of the aforementioned malls preparing for a serious bloodlet. 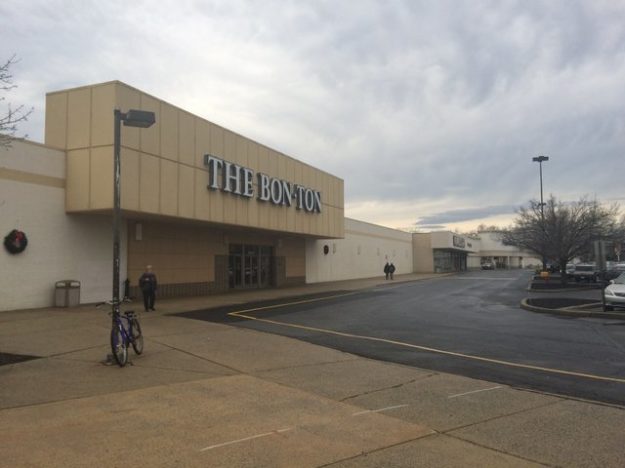 Both photos (from winter of 2017) so far have featured the The Shoppes at Trexler, a relatively small, obscure operation in the affluent western suburbs of Allentown. The demographics in this area—with household incomes northward of $80,000 and poverty rates well below 5%—certainly support some high-power retail; just a few years prior, a Whole Foods, Costco and Nordstrom Rack opened just two miles away. But The Shoppes at Trexler sits at the juncture of two less-traveled roads, far from a major interstate exit ramp. Its other anchor tenants are Kohl’s and Marshall’s, both of which have weathered the retail turbulence reasonably well.   And, though the loss of Bon-Ton is hardly a feather in its cap, The Shoppes at Trexler already dodged the bullet once before. And this is where it gets interesting: Trexler is really only a former mall that happens to still host a Bon-Ton. 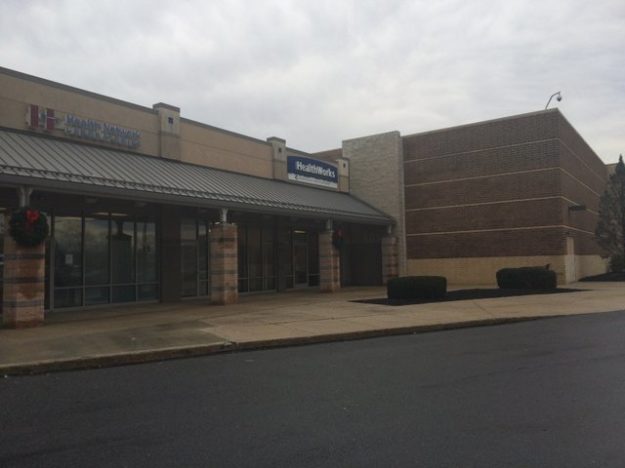 Operating since 1974, Trexler Mall ceased functioning as a pure retailer years ago. By the late 1990s, the mall was largely vacant, a good decade before dead malls became widely known phenomena. But instead of languishing, the mall management essentially did the unthinkable: it recruited a major hospital in the region to occupy one wing, formerly occupied in part by a supermarket. 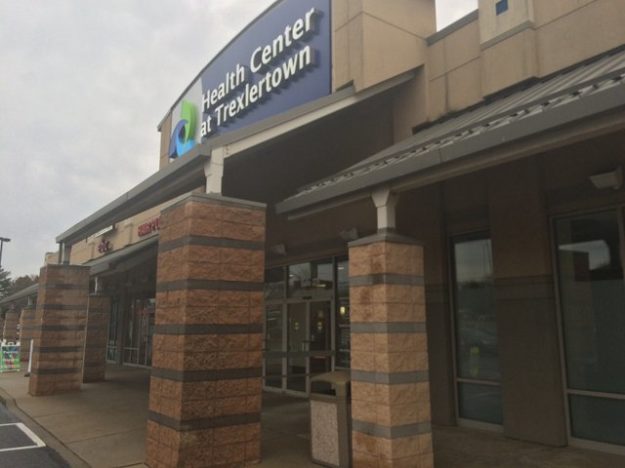 Not surprisingly, Lehigh Valley Health Network had no use for a conventional enclosed mall configuration, and it was a lucrative enough opportunity that the owners re-engineered the structure from the inside out. In short, they “de-malled” the Trexler Mall. And renamed it. Here’s another view of that entrance to the Health Center at Trexlertown. 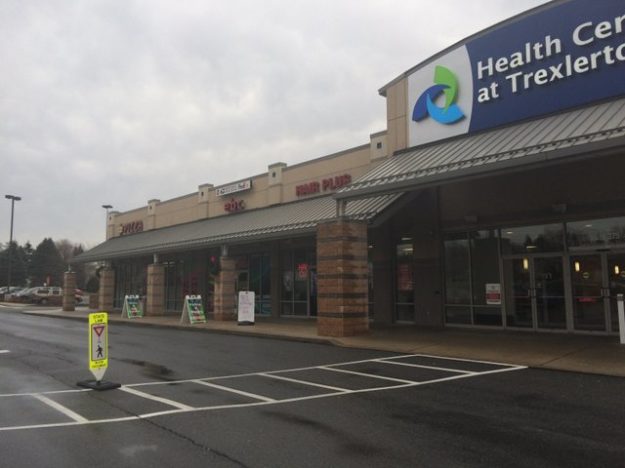 What once was a mostly windowless, inward-oriented facility now directly faces the parking lots, much more like a conventional strip mall. 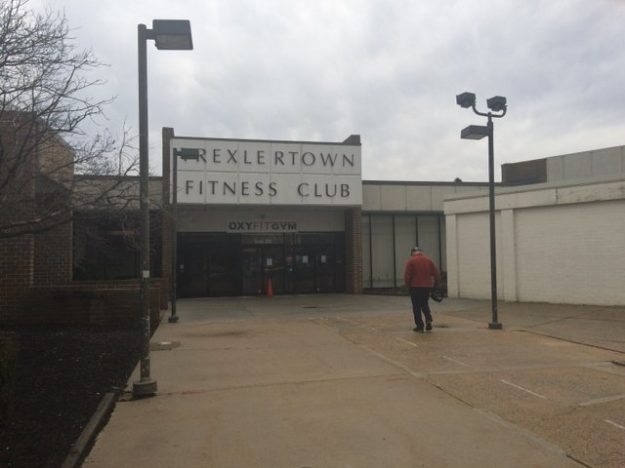 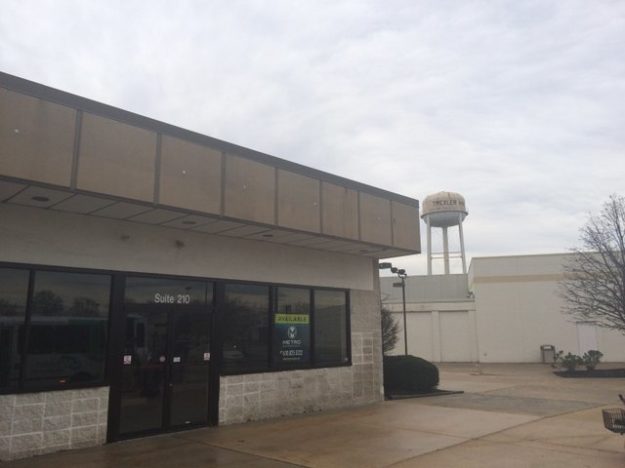 Revitalization hasn’t been without its setbacks, and the gym in that second photo—probably at one point another department store—has apparently closed since these photos from over a year ago. (Also, notice the water tank in the background still says “Trexler Mall”.)  But the overall occupancy rate in terms of floor space was probably about 80% at the time of my visit. And the Health Center clearly comprised a huge portion of the foot traffic. More interesting, however, is the interior, which barely betrays its mall origins. 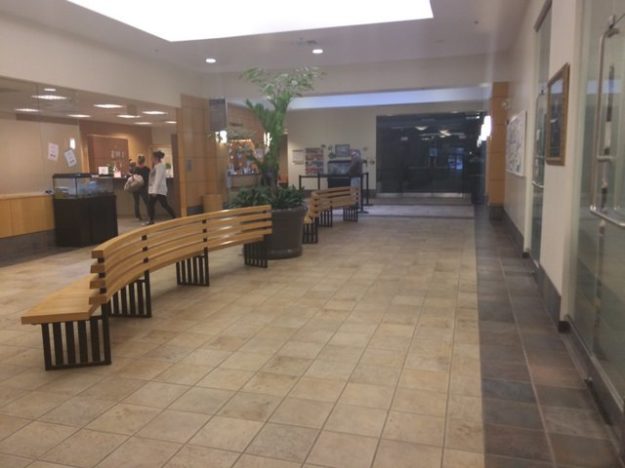 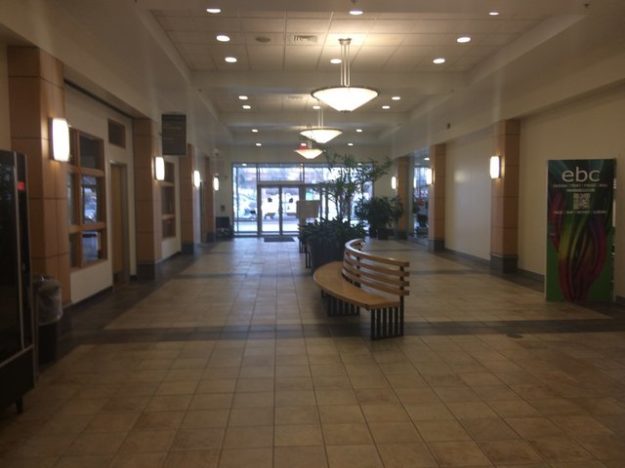 It’s easy to imagine the physical form of this hallway once functioning as the entrance to a mall, with the in-line stores on the margins. The image below is a dead giveaway: 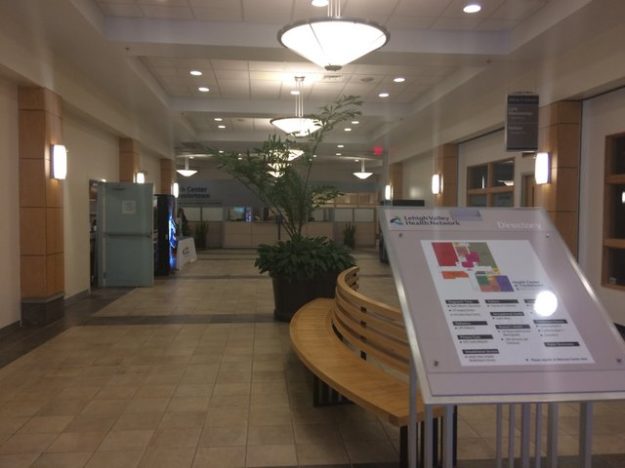 The placard might as well serve as a cut-and-paste job from the original mall’s floor plan.

It’s hard to say whether The Shoppes at Trexler has a promising future. The Bon-Ton will close by the end of April, leaving just a few anchor tenants: Kohl’s, Marshall’s, and—depending on how you classify it—the Health Center at Trexlertown. These three may ultimately save the mall; the first two retailers have fared better than most during this apocalypse. And as for the Health Center? Well, tenants like these may prove to be the enclosed mall’s salvation. Health care remains one of the most resilient industries, boasting job growth numbers that far outpace most others. Hospitals and clinics are likely only to grow in the years ahead, as more Baby Boomers approach an age when their health care needs are considerable. And, considering that malls are more desperate than ever to secure low-risk tenants, and hospitals need lots of parking, the pairing between malls and hospitals should fit like a hand in a glove. Clearly, in the years ahead, something has to happen to the cavernous, largely neglected interior spaces to struggling malls. And, with The Bon-Ton Stores, Inc. going out of business, the quantity of desiccated, windowless suburban shells is poised only to grow as well. We can’t turn them all into churches.

PrevMid-century Americana: the point when urban housing development really hit a wall.
Sears and Whitehall Mall: the only show in town still can barely pitch a tent.Next