Two lanes diverge on a road, and I took the time to blog about it.

Generally, when I stumble across an unusual bit of infrastructure, I can figure out what’s gong on after some careful scrutiny. But bicycle and pedestrian markings have gotten so variegated and complicated that, more often than not, I’m left scratching my head. I pondered the rationale for a weird crosswalk in Baltimore a few months ago, but I didn’t quite hit the bull’s-eye. Here’s another example 50 miles away, in the nation’s capital, where I can only guess what they were trying to achieve: 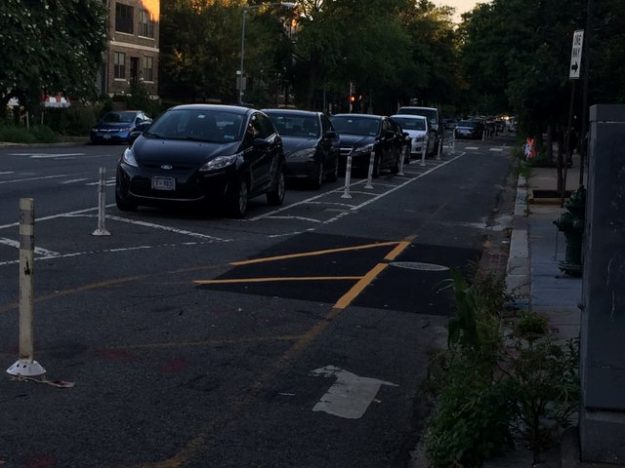 Along the bustling U Street NW corridor on the boundary between the Shaw and Logan Circle neighborhoods, we see this protected bike lane on the intersecting street.

Within the last decade, this means of protection has become much more commonplace: where bicycles receive the space between the curb and the on-street parking zone. It has proven safer for bicyclists than the more common place and conventional solution: the stripes that separate the parking zone from the cartway, a situation where bicycles must maneuver around both moving cars that veer into their lane as well as the swinging doors of people alighting from their parked vehicles. Dangerous. In the photo above, the Public Works Department in Washington DC has dedicated an approximately two-foot clearance area (indicated by the slash marks that are perpendicular to the curb) and reinforced it with white reflective stanchions that have a bit of the effect of bollards. No moving vehicles or swinging car doors to threaten cyclists. Additionally, the width of the bike lane and the protected zone are sufficient that both directions of bicycle travel can share the one side of the street, even though, in this case, the direction the parked cars are pointing indicates that the street is one-way for vehicles. Therefore, beyond just protection, the striping affords bicycles an added level of mobility and freedom over cars. Terrific; exactly what bicycle advocates want to see.

But then, just a few feet further—visible in the foreground, and approaching the intersection with U Street—the bike lanes do something unusual: they diverge. 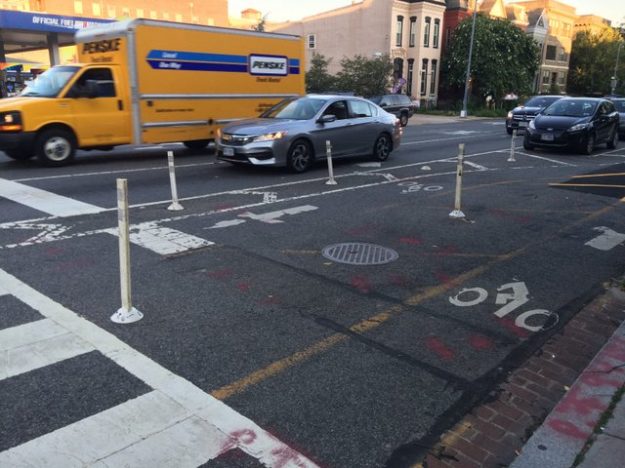 At this point, the two-directional bike lanes have a forbidden median that is as wide as the lanes themselves, combined. More bollards, and a lot of faded yellow painted slashes that essentially render at least 40 square feet of the roadway unused. Looking at the other side of the intersection, north of U Street, we witness a similar configuration. 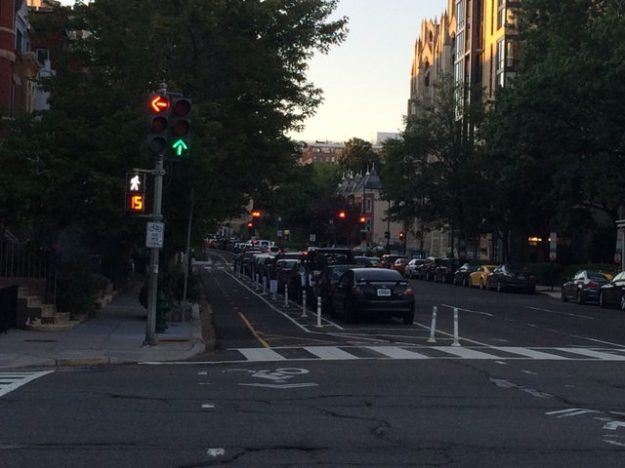 Though it’s not completely easy to discern, the two bike lanes diverge again, creating a sort of inverted Y-shape, with a triangular off-limits zone indicated through more yellow painted slashes.

Does this arrangement help manage the flow of bicycle traffic? My initial speculation, especially upon seeing the lanes diverge more dramatically on the side closer to me (the first two photos) was that the shape creates some added surface area for the bike lane approaching the intersection and stoplight, giving bicycles more room to assemble while waiting for a green, without accumulating too much and creating backups further down the lane. But that speculation doesn’t work for a variety of reasons: 1) the Y-shaped intersection on the north side of the U Street intersection does not apply to the bicyclists stopped at the light, so it’s inconsistent; 2) it’s a protected bike lane, so there’s no danger of conflict with vehicles; 3) it’s two-lane for the bicyclists as well, so a very slim chance of collisions if there’s significant congestion; 4) Washington DC never has enough bicyclists to experience congestion at intersections. No doubt the city is among the most bike-friendly in the US, but it’s hardly Copenhagen or Amsterdam. The volume of bicyclists remains thin enough that traffic is unthinkable. At the very least, I could see some utility in this shape if the lane approaching the intersection split into two turn lanes, giving bicyclists seeking to go right or straight one option and those going left the other. But that’s not what we see here, and the chances of such a need arising are slim; in a country where a small share of people bike regularly, bicycle traffic jams simply don’t take place.

The reason for the lanes to diverge remains a mystery. My only other guess is that it’s less about the lanes and more about the adjacent on-street parking. 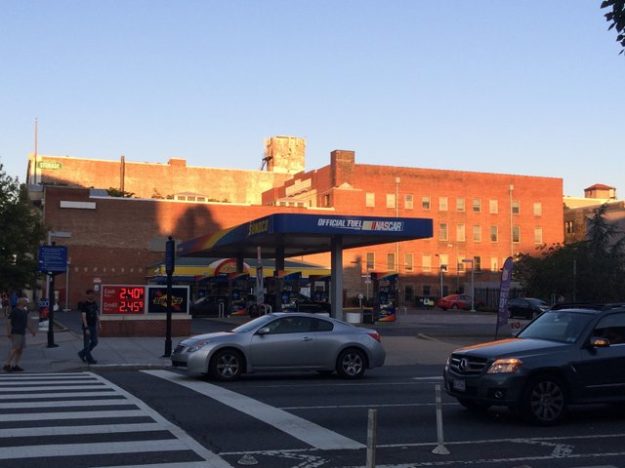 On less busy urban streets (local roads), on-street parallel parking can take place almost up to almost the corner without interfering with traffic flow. But on protected bike lanes along busier collector roads, the parked cars aren’t up against the curb—they’re floating in the middle of the street—and vehicular speeds tend to be faster. Thus, a car with its nose right up to the intersection and crosswalk could create real hazards, not just in the possibility that turning vehicles might clip the parked ones, but for the safety of bicyclists, who would be hard to spot if they were hiding behind a parked car right at the intersection. When the light turns green, the motorist could turn right into the bicyclists, if they were lurking in their lane behind a parked car. Thus, I’m increasingly suspecting this unusual configuration where the lanes diverge is more of an artificial manner of forcing the parked cars out of the last 10 yards or so before the intersection and pedestrian crosswalk.

Good bicycle design and engineering may not be in its infancy, but it’s still barely beyond crawling. The planners and engineers at Washington DC’s Public Works Department probably have a more sophisticated reason for this approach—one that might even afford some benefit to the bicyclists—but it’s not abundantly clear to an occasional rider like me. And it might not be clear to any but the most avid bicyclists, which does elicit cause for concern: are the continuously evolving stripes, sharrows, and stanchions fostering an increasingly dense, byzantine network of messages that might confuse all bicyclists? Fortunately, urban bicyclists, on average, still aren’t moving as quickly as cars, so they get a bit more time to process the signals and symbols. Unfortunately, a false move for a manually powered vehicle that weights about one-hundredth of the typical car can still yield far more devastating consequences. As urban bike lane design goes, we’re still in a trial-and-error phase. Maybe, in the years ahead, the demand will rise for a consistent series of bicycle lane rules and design standards. But it might take the American equivalent of Copenhagen to get us there.

PrevTri-State Mall: not yet dead, but gangrenous.
Worcester Plaza: a green oasis surrounding by “No Trespassing” signs.Next

15 thoughts on “Two lanes diverge on a road, and I took the time to blog about it.”