Tri-State Mall: not yet dead, but gangrenous.

I’ve encountered some pretty bleak suburban shopping districts in my day, but Delaware’s Tri-State Mall, just a stone’s throw from the Pennsylvania state line in the Philadelphia suburbs, ranks near the top. 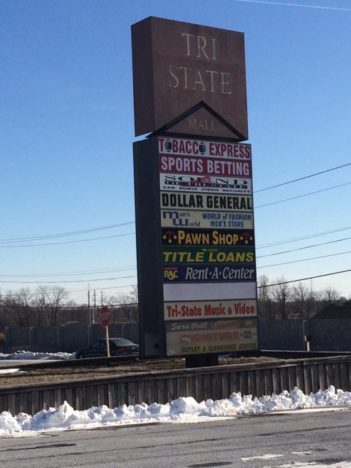 Notice I said “near the top”. It’s not number one: I can’t quite place it at the same tier as the Bannister Mall area in Kansas City—nothing I’ve seen quite reaches the severity and expanse of that suburban blight. But Tri-State Mall comes close. And, in some ways, it’s tougher to explain: the entire 1950s-era residential community surrounding Bannister Mall declined in the 1990s, so the death of the mall itself came as no great surprise to people who monitor this sort of thing.

But Claymont, Delaware, the home of Tri-State Mall, doesn’t quite fit this mold. It’s merely a Census Designated Place (CDP), the classification the US Census Bureau uses to monitor unincorporated areas with a clear identity by treating them like discrete quasi-municipal units. Claymont has no strict borders, but the general Claymont vicinity—within the CDP’s boundaries—has lost population over the last thirty years. Still, it doesn’t represent a huge swath of decline. It sits squarely within the large conurbation between Philadelphia and Wilmington. And one can find perfectly acceptable retail less than a half mile away from the Tri-State Mall, along the same arterial (Naamans Road) on the other side of Interstate 95, where Northtowne Plaza hosts a Home Depot, Rite Aid, Wawa, and a PNC Bank, among other outlets. While the Bannister Mall area revealed substantial disinvestment for miles in every direction, the Tri-State Mall offers perfectly stable middle class areas just a half-mile away.

So what went wrong with the Tri-State Mall? 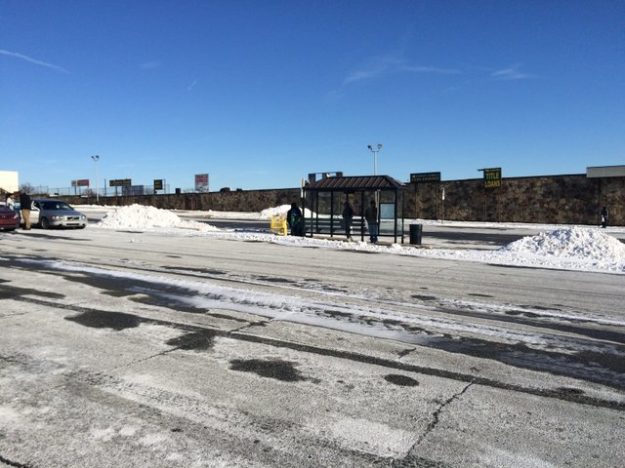 My impression is that it was never a real heavy-hitter. Opening in the late 1960s, the mall hosted two anchor spaces and about 50 inline tenants at its peak. Most likely, the location attempted to capitalize on Delaware’s absence of a sales tax to lure both Pennsylvania shoppers from the Philadelphia suburbs as well as New Jersey, just across the Delaware River (and Claymont is only a few miles from the Commodore Barry Bridge). But several of the communities nearby in Pennsylvania were hemorrhaging manufacturing jobs at this time—most notably Chester, which today carries the dubious distinction of being Pennsylvania’s most impoverished city. Some of the negative characteristics of Chester crossed the state line into Delaware, though most of the social ills remain isolated on the south side of I-95—the Claymont side of the highway.

Additionally, Tri-State faced competition just a decade later. Tri-State’s tribulation arrived when the region christened the Christiana Mall, just southwest of Wilmington. This second mall rested at the convergence if I-95, I -295, and I-495—a site equidistant from Maryland and New Jersey—and still pretty close to those Philly burbs—and in a more uniformly affluent area. To this day, even amidst the escalating malaise of malls in general, Christiana Mall remains a Class A retailer, over a million square feet in size and hosting such mid-upscale tenants as Nordstrom, Banana Republic, Williams-Sonoma, and Swarovski. At various points in the past, the Apple Store at Christiana Mall was the number one seller of iPhones in the country, teeming with people seeking to avoid that sales tax. But that’s not all: about seven miles to the west, Concord Mall also encroaches on Tri-State’s market. Despite being older than Tri-State and farther removed from a major interstate, Concord Mall boasts a much larger size and more reliable tenants: Boscov’s, Macy’s, Barnes and Noble, Best Buy, Hollister, Yankee Candle. It, too, capitalizes the lower cost of shopping in Delaware. 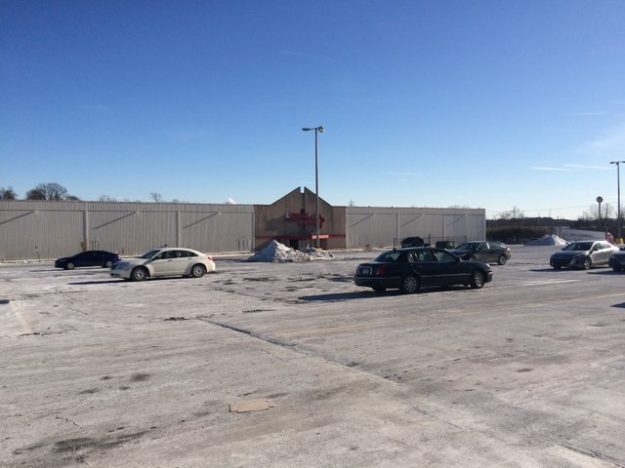 While these sales tax advantages make the First State particularly attractive for many retailers, customers will inevitably gravitate toward the more appealing environments. Never fancy and certainly nothing to look at, the Tri-State Mall simply could not compete. It began to take a nosedive in the 1990s, but as recently as the late 2000s it remained viable, hosting Value City and a Big Kmart. Looking at the parking lot in this old Google Street View, it still filled a blue-collar niche. Value City closed in 2008 when the company folded; a Burlington Coat Factory (the notorious death knell for malls) replaced it. The perpetually struggling Kmart closed in 2014.

Indie filmmaker Dan Bell covered Tri-State sometime in 2015 and noted that it has long been a popular haunt for fans of dead and dying retail, not only because of its perpetual woes but the sheer ugliness of the interior. Apparently it received no real upgrades throughout its life; one commenter (from the largely inactive blog Labelscar.com) noted that Tri-State is “easily one of the bleakest and most unappealing malls that we’ve visited.”   Dan Bell caught the mall when it had, at most, a half-dozen tenants in the interior.

Bell’s visit was the mall’s swan song. The interior completely closed in November of that year. By last summer, the Burlington Coat Factory relocated a few miles away. It previously occupied the large, taupe-colored space visible in the distance. 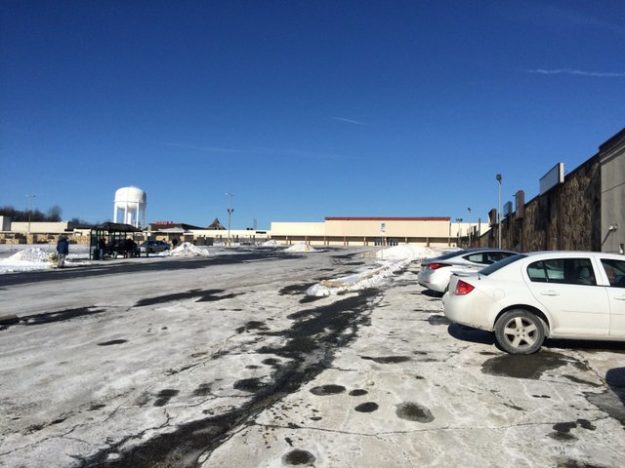 You know a retailer’s outlook is grim if even Burlington Coat Factory decided it’s not good enough. The rest of the Tri-State’s exterior is predictably austere. 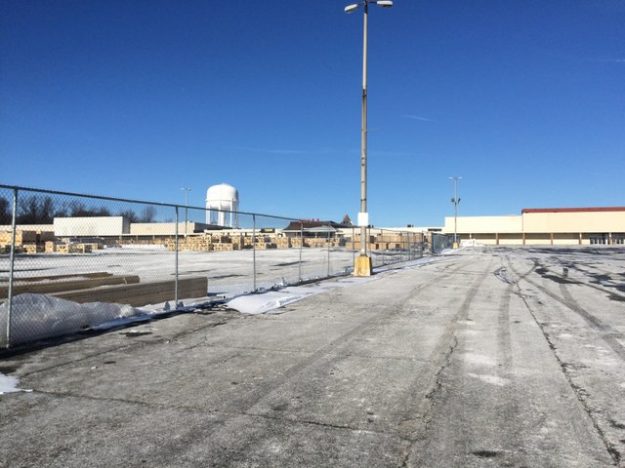 Interestingly, the old Mall’s primary entrance—barely visible in the photo below—now seems to host some fenced-in lumber storage. So at least the property manager is eking out a bit of revenue by leasing the pothole-riddled parking lot. 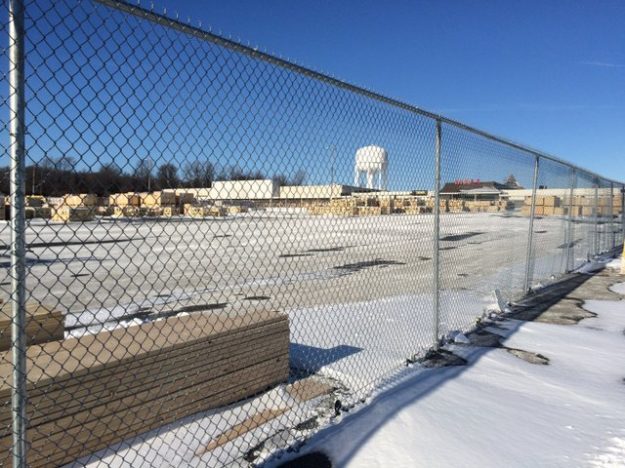 See the red letters in the distance on the right with the word “M A L L”? That’s what’s left of Tri-State.

Except that it isn’t. 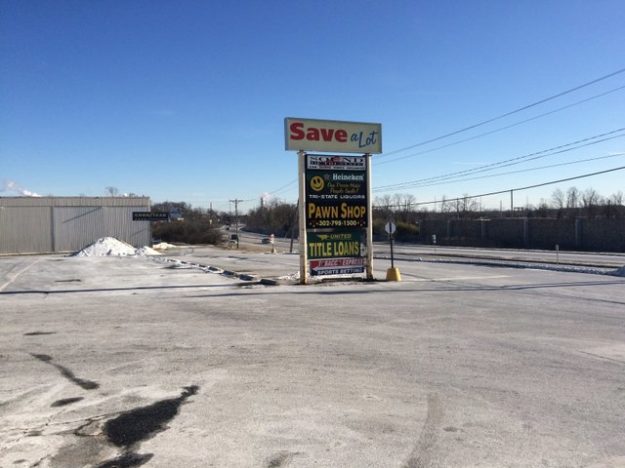 The Wikipedia article on Tri-State Mall does not consider it dead. It’s a struggling mall, no doubt, but not completely defunct. The sign in the pic above reveals the tenants in the appendage immediately to the southeast of the old mall’s core, which is visible in the map below. 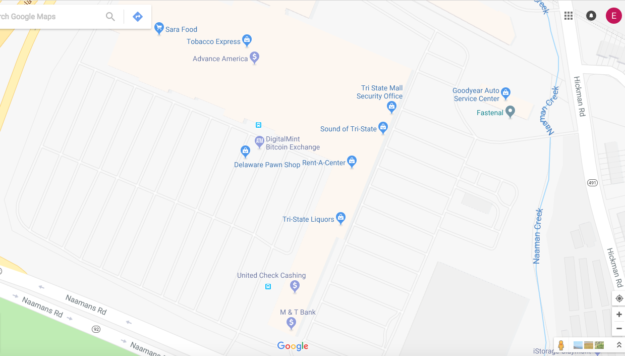 The “protuberance” is a strip mall that remains part of the Tri-State Mall complex and prevails with an array of tenants. 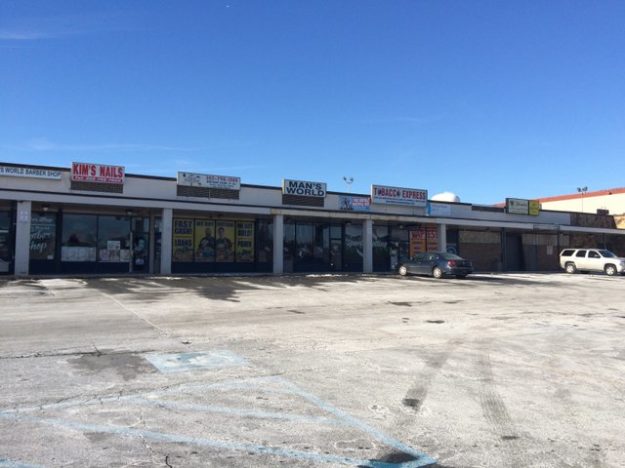 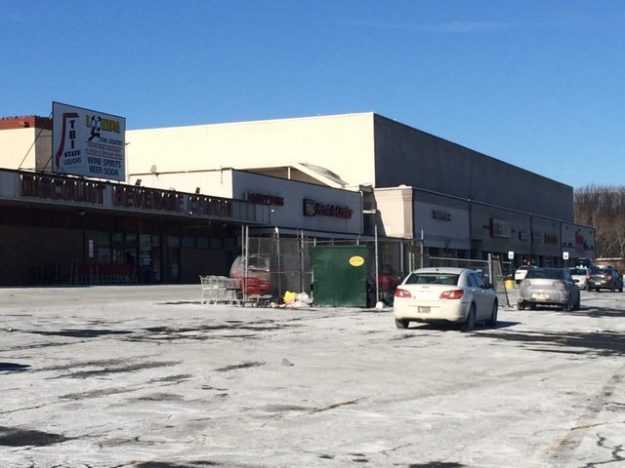 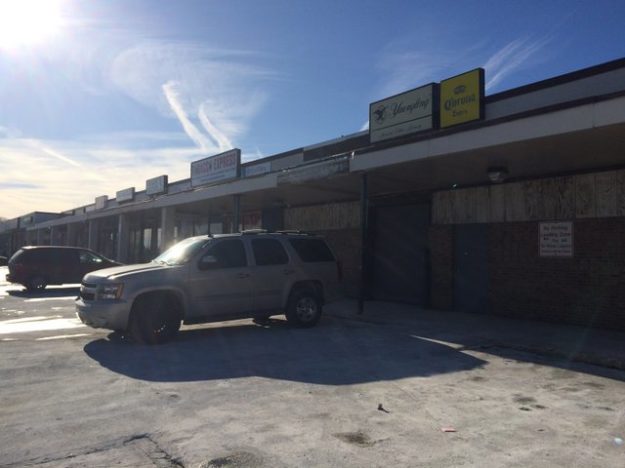 Elsewhere, the Tri-State campus hosts one national brand name: in the distance in the photo below, to the left of what I suspect was once a Wendy’s. 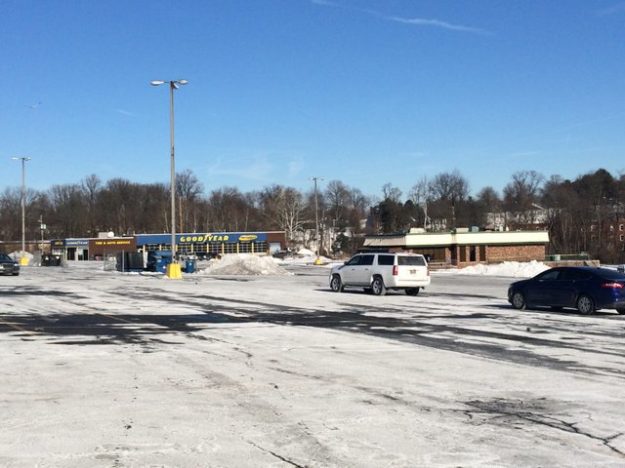 Beyond these snapshots on a bright cold January day, there’s not much else to convey about Tri-State Mall that the unusually generous photo-chronicles of Google Street View can’t capture. It always was a third-tier mall. What’s remains interesting is the sharp dichotomy between the interior portion of the mall—completely closed—and the comparatively active strip mall portion. These binary economic outcomes bespeak a largely overlooked disadvantage to the enclosed mall as a building typology: it offers little more than a windowless shell to passers-by, with no possibility of engagement or awareness of the interior outside of signage. Without a parking lot full of cars, a mall is an inordinately uninviting place. This configuration contrasts sharply with our historic town centers, which rested in a gridlike configuration that, even at their most neglected, still offered numerous points of ingress and egress for random passers by. The buildings in old downtowns also featured windows, so, even when in disrepair, they piqued some curiosity as to what might lurk inside. Malls are the retail equivalent of a cul-de-sac: if we have no reason to go there, we’re highly unlikely to even glance by the periphery.

A half-century ago, malls offered a hermetically sealed, climate controlled world for commerce to take place tidily under one roof. We loved them. They afforded a great convenience, as long as there was reason enough to enter in the first place. Lacking that magnetism, enclosed malls may have less of a reason for being than even the ugliest strip centers, like the exterior portion of Tri-State Mall. The typology has, in effect, backed itself in a corner, or off the edge of a cliff—which explains why, when malls decline sharply, they rarely offer any chance of recovery. They venture past the point of no return far more easily than a main street or a historic central business district, many of which have revived marvelously from former dire straits. This predicament may also explain why, when so many automobile oriented malls die, the optimistic developer will convert them to an unimaginative power center: a cluster of strip malls anchored by some big-box retailers. Strip malls boast a fundamental extroversion that malls lack and are therefore more prone to a second life with some savvy investment. Malls just necrotize.

If Tri-State Mall in Claymont ever gets its makeover, I suspect the revived portion will look more like the wing that’s still hanging in there (if by a thread). While the long-term fate of Tri-State seems bleak, it may actually survive longer than many other shopping centers, which Amazon and online shopping continue to decimate. After all, much of the clientele at Tri-State has such moderate incomes that they lack the access to credit to make online purchases, and they will always need a bricks-and-mortar outlet that accepts cash. Being as low-end as possible, therefore, may be Tri-State Mall’s lifeline. That and it’s Delaware: no sales tax.

PrevLogos in limbo: why Pizza Hut, which is everywhere, can’t find its niche.
Two lanes diverge on a road, and I took the time to blog about it.Next

21 thoughts on “Tri-State Mall: not yet dead, but gangrenous.”