Logos in limbo: why Pizza Hut, which is everywhere, can’t find its niche.

If we view advertising while wearing our semiotic skullcaps, we’re bound to come up with widely different conclusions than when we espy a brand, passing along in a car, simply for its promotional message. But that’s the point. When it comes to ads, who cares about the explicit—what the ad is actually saying? It’s the undercurrent that distinguishes a brilliant or a failed campaign from one that merely states what it is trying to achieve.

I’ve covered new branding efforts from old, familiar corporate names in the past on multiple occasions. Few enduring companies adhere to the same logo for more than a generation; many of them reinvent themselves every decade. What’s more interesting is where the nationwide chains choose to “roll out” these changes. Sometimes those surprises come in generally struggling markets, like Qdoba pioneering its new look in downtown Newark. Sometimes it’s the brand itself that is struggling, and it chooses an airport as its reliable—but no doubt pricey—pedestrianized commercial space.

Here’s a surprise in a completely different milieu: rural (or at least nearly rural) America. Recently I was passing through Middleburg, Florida, an unincorporated exurb of Jacksonville. While it’s only about a 40-minute drive to the center of Florida’s most populous city, you’d hardly know it in Middleburg—a settlement that generally looks like a small country town. 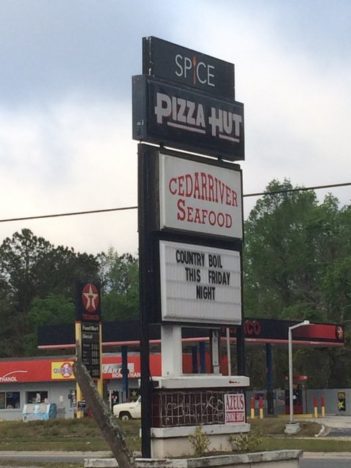 Since none of the other brands at this strip mall are familiar, it should be obvious which one I’m referencing: the Pizza Hut. But take a further look at that logo on the second from the top. Is it familiar? The actual storefront uses the same typeface, along with a passing reference to the company’s signature red roofline, even though the strip mall setting precludes any actual, visually distinctive rooftop. 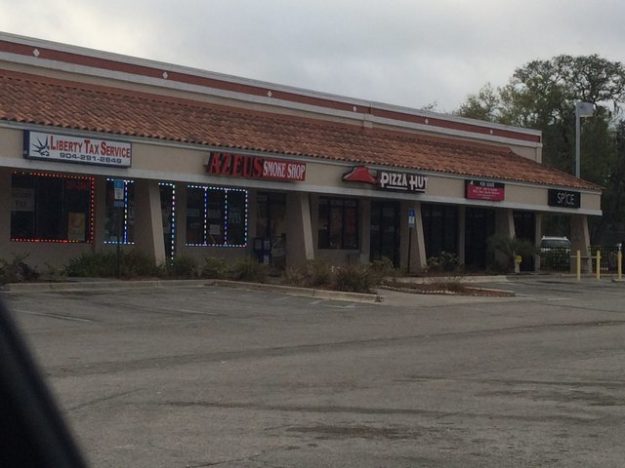 Those of us from either Generation X or the older end of the Millennials can remember at least one phase of the evolution of Pizza Hut appearance. And if we can’t, then there’s always Pinterest, which offers hundreds of brand timelines. But the one at this Middleburg strip mall doesn’t appear in the chronology above, and a search through Google Images does not turn up many results at all. What are the company’s standards for using its logos?

To the best of my ability, I’ve concluded that this obscure font—and the near absence of Pizza Hut’s signature deployment of red—was a regional trial. This idsgn blog article from 2009 suggests that the company, recognizing its flagging sales during the peak of the Great Recession, tried to emphasize the diversification of its product offerings: pasta, wings, and healthier ingredients. Not just pizza. In fact, many of the locations—ostensibly spotted in higher frequency in Florida—eliminated the word “Pizza” altogether when using this font. “The Hut” said it all.

Ten years later, it’s a foregone conlclusion that “The Hut” wasn’t a hit. Its impact was so slight, in fact, that most depictions of the logo’s history don’t even acknowledge it. Yet here it survives in a Florida strip mall, serving as evidence that, as powerful as brand recognition can be at attracting customers to a location, the very cost of updating a sign may prove too burdensome for many franchise owners, which is what I expect we’re seeing here, just as we were with a Qdoba in Philly that used both the old and new logos simultaneously.

As pizza chains go, “The Hut” ranks at the top tier for national visibility, alongside—and perhaps surpassing—other brands such as Papa John’s, Domino’s, and Little Caesar’s. Unlike its competitors, however, Pizza Hut has established a tremendous portion of its operations on sit-down restaurants with table service. The other names listed operate almost exclusively on delivery or carry-out service. In fact, we’d be hard-pressed to find a single example in the U.S. of a Domino’s, Papa John’s or Little Ceasar’s where the customers can even sit at a table. Pizza Hut’s tendency to accommodate diners necessitates a large floorplate, giving the company far more reason to operate in standalone structures, where it could employ that distinctive roof that has formed such a huge component of the brand.

The Middleburg strip mall shows Pizza Hut targeting its carry-out submarket: the “express” clientele. Nothing wrong with this, and, in an era of app-driven delivery service, it may prove the most lucrative approach. After all, Papa John’s has always flourished as a kitchen and a tiny front counter for greeting customers, with no wait staff or table bussers whatsoever. Pizza Hut has operations both with and without that added layer of service (and added expense).

The fact that I stumbled across a logo design in Anywhere, Florida that never really took off—and, at least according to Pinterest, the more popular, brush-stroke typeface has undergone mods at least three times in the last decade—suggests the company hasn’t yet really found its footing since “The Hut” and the all-caps typeface. These days, various modifications of the logo are everywhere, so it seems, and their co-existence foreshadows the possibility that brand dilution that could result in customer confusion. How often do we even spot locations with the actual roof in 2018? Can Generation Y even associate the roof with the brand?

The reality, of course, is that chain restaurants are feeling the pinch, not only because people are eating at home more often (either through meals the cook or delivery service) but because the restaurants that flourish today are locally owned and independent names, which younger demographics increasingly prefer, valuing originality and authenticity over locational convenience or familiarity. I’m not saying Pizza Hut is in eminent collapse—I’ve heard no evidence that it has yet closed many locations (in contrast with Ruby Tuesday and Applebee’s)—but it’s possible that no amount of brand-tweaking will change this, nor will a complete embrace of the strip mall. Pizza Hut’s problem is that the words “Pizza” and “Hut” have become too ubiquitous. And even a logo that only saw the light of day in a few dozen locations can’t remedy the ultimate paradox: the company is a victim of its own success, in an era where love for the underdog knows no bounds.

PrevA hydrant below sea level: raising the stakes for mitigating property loss.
Tri-State Mall: not yet dead, but gangrenous.Next