A hydrant below sea level: raising the stakes for mitigating property loss.

A bizarre piece of infrastructure like this will inevitably captivate a few more curiosity seekers than yours truly. 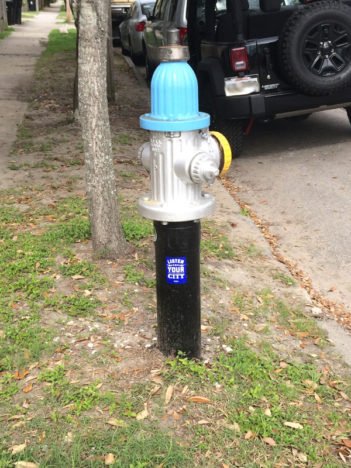 As a Google Images search would prove, I’m not the first to snap a pic of something like this. Still, a fire hydrant elevated about 18 inches off the ground is hardly a typical sight even in the best of times. And, if the deliberately blurred license plate in the distance didn’t give it away, it still should probably come as no surprise where something like this would pop up.

It’s New Orleans, a city with more than its share of idiosyncrasies, not the least of them caused by its unusual topography. Everyone knows already that the majority of the city sits in a bowl a few feet below sea level. Less obvious is that the bowl itself rests (floats?) in a larger basin filled with water. Despite a location fully contiguous with the rest of the Gulf Coast, the New Orleans metro shares cultural characteristics of many islands, flanked by an mighty river to the south (Mississippi), a vast, brackish estuary to the north (Lake Pontchartrain) and wetlands to the east and west. Founded by Jean-Baptiste Le Moyne de Bienville in 1718, New Orleans flourished in comparative isolation, the largest city in the Deep South for most of the antebellum period, yet only accessible by boat. Up into the early 20th century, it remained one of the nation’s 20 most populous cities. Even though numerous bridges, causeways and ferries today link it to the rest of the Pelican State, it continues to display quite proudly the peculiarities under which it incubated for a good two centuries before structural engineers found a way to enter the city by land.

Not every hydrant in New Orleans is this tall. In fact, most aren’t. I had never noticed them during my more consistent stay in the city between 2004 and 2010. But other chat rooms pointed them out, speculating as to their reason for being. Are they an accident—a byproduct of a perpetually sinking city? Or are they deliberate—a means of accessing water to put out fires in the event that floodwaters have submerged hydrants of more conventional height?

I tend to favor the latter explanation, as illogical as it might seem to outsiders. After all, why would a flooded environment have to fend off fires? Having lived in New Orleans during the Hurricane Katrina floodwaters, I can attest that fires were a colossal problem throughout the region, as civil unrest, felled power lines, and gas leaks all triggered conflagrations in the heaps of debris left from damaged buildings. (They’re a hazard during dry periods in the city as well, which I captured in a much older blog post.) And the undernourished post-Katrina response and recovery lacked both the personnel and the water pressure to extinguish these fires. Hundreds of homes burned in the days after Katrina. A inaccessible hydrant can spawn the lag time that destroys property and lives, and water can serve as an impediment regardless of the temperature.

Municipal information on these hydrants is scant, so my only solution is to speculate. Perhaps they existed prior to Hurricane Katrina’s inundation, but they also seem like a credible FEMA-initiated Public Assistance solution to mitigate the impact of potential rapidly spreading fires in periods of crisis. Only one question remains though: since the hydrant I snapped clearly didn’t match the base flood elevation generally characteristic of the Mid-City neighborhood (which, if I recall correctly, measured between six and nine feet at the worst), would the hydrants be tall enough, if…or when…we get the next Katrina?

PrevThe postmodern storefront: a custodial closet at the main entrance.
Logos in limbo: why Pizza Hut, which is everywhere, can’t find its niche.Next

8 thoughts on “A hydrant below sea level: raising the stakes for mitigating property loss.”