Tanks on the border, but it isn’t a military strategy.

For a commodity as market-sensitive as petroleum (let’s call it “gas”), a featurette on pricing is less likely to be indicative of market trends than, say, certain perishable goods (which induced considerable hardship on dairy and grain farmers these last few years) or certain appliances (in which the decline in demand has bankrupted several high-profile retailers).

But a drive across the Northeast—where state-to-state travelogues are particularly easy, since the states are so dang small—can often reveal intriguing distinctions over a brief period of time. Like this gas station in rural central Rhode Island on a hazy summer day in 2015: 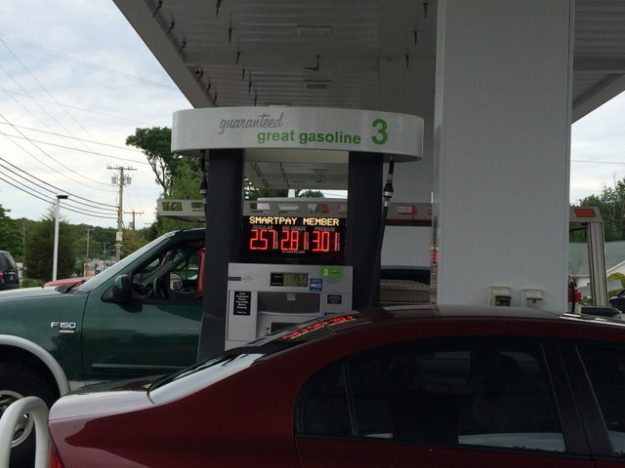 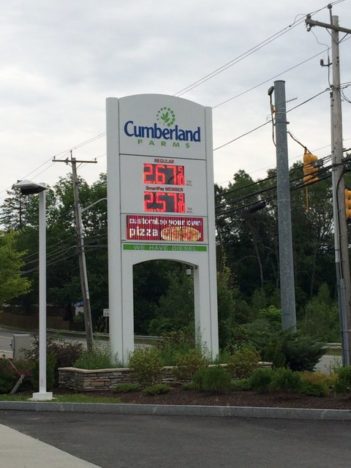 Continue westward down that highway— 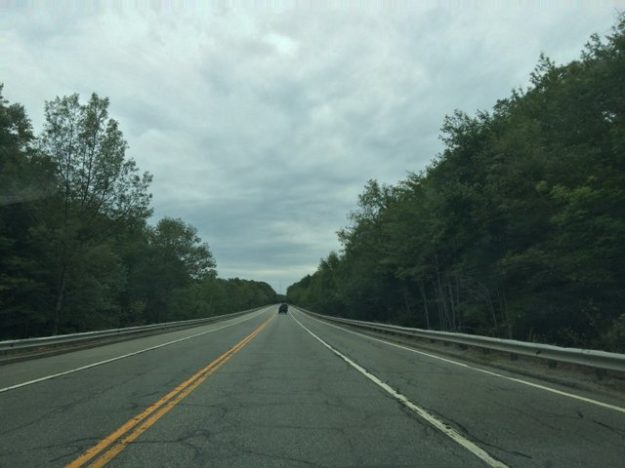 –westward to the Connecticut line, and just a bit further, another gas station appears. 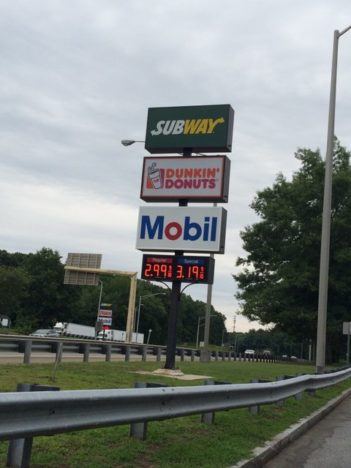 Nearly a 50-cent difference per gallon, and, for many Connecticut residents living near the line, enough cost savings to justify a slightly farther trip to save at least $5 (and maybe up to and over $10) to fill up a gas stank.

Is it possible that taxation strategies give Rhode Island a competitive advantage over Connecticut? Rarely is it safe to draw sweeping conclusions from a single example, and the visual evidence here is weak—nowhere near as strong as my multiple examples of strategic cigarette pricing in Pennsylvania, where convenience stores tout their smokes near the border with New Jersey and, 100 miles to the southwest, near the border with Maryland. The evidence in those examples was unquestionable: Pennsylvania levies a sufficiently lower tax on cigarettes to corner the market in towns close to the border, so everyone seeking a smoke will steal across the line. No point in even opening a smoke shop in NJ or MD if it’s within 10 miles of the Keystone State.

It’s not as clear-cut when dealing with gas tax among New England states, but we can at least witness an incipient price war. According to 2017 data from the Tax Foundation, Rhode Island has the twelfth most expensive gas tax per gallon in the country (at 34 cents), while Connecticut has the sixth highest (at 39.85 cents). Neither state offers particularly low taxes compared to the national average, and five cents is scarcely likely to prove sufficient price differential. But these rankings provided by the Tax Foundation attempt to equalize metrics—not necessarily a straightforward practice, since some states assess a “specific” (per-gallon) tax collected at the pump, while others assess an “ad valorem” tax to wholesalers, which, no doubt, these brokers then pass on to the customer. Such administrative and mathematical distinctions may help explain at least in part why we witnessed a nearly 50-cent-per-gallon difference at the state line (back in 2015—but, as before, gas prices have always tended to fluctuate wildly.)

Regardless of the magnitude of the difference in price, Rhode Island vendors almost unequivocally have an opportunity to make money off of Connecticut motorists living or working near the border who are willing to travel a few miles out of their way to save a few bucks. The practice of overloading commodities at political boundaries, where specific laws can skew prices or the supply, is common anywhere that people enjoy relative ease of movement across these said boundaries. Elsewhere in New England, New Hampshire is famous for proudly purveying various, often smutty paraphernalia that neighboring Massachusetts subjects to strict regulations. New Hampshire also benefits from a virtual fortification of malls at its southern border, capitalizing on its low (non-existent) sales tax to attract shoppers from Massachusetts.

This practice of strategically positioning goods and service at political boundaries generally plays out handily through market forces rather than jurisdictional policy: that is, taxes are hardly the only factor influencing gas prices. Case in point, the Mobil gas station above with $2.99 per gallon came from eastern Connecticut, where Providence, Rhode Island was the closest major city. In eastern, Connecticut—the affluent suburbs of New York City—prices typically hovered around $3.50 per gallon at that time. While it’s possible that those eastern towns—places like Greenwich, Darien, and New Canaan—levied their own additional taxes to the gasoline, it’s probable that the 2015 cost per gallon was a full dollar higher than rural Rhode Island because median incomes were so high and people were willing to pay. That willingness to pay diminishes as one travels eastward across Connecticut, and it behooves Rhode Island vendors to capitalize on the slightly lower taxes, potentially generating greater revenue through a greater quantity gas sales even at a lower price.

Small states particularly seem prone to take advantage of distinctions to their neighboring jurisdictions. It takes less than an hour to drive across Rhode Island, traffic notwithstanding. As the nation’s smallest, the Ocean State would—at the crudest level of analysis—enjoy fewer opportunities to collect property tax, due purely to the comparative lack of land. One could make a similar case with Delaware, the nation’s second smallest state, which unapologetically deploys tax structures that make it highly advantageous to purchase goods and for businesses to incorporate themselves. Meanwhile, drivers throughout the Mid-Atlantic had long recognized New Jersey as the destination for cheap gas, since it had the 49th highest tax rate in the nation. Until 2016, when a significant gas tax hike pushed it up to the sixth highest, numerous residents from neighboring states—particularly New York and Pennsylvania—would cross the border to full up their tanks.

Rhode Island, which in recent years has ranked notoriously low (if not dead last) among the states for its attractiveness in starting a new business, could seriously assess how it can position itself competitively against its neighbors for basic commodities like gas. Economists with far greater skills than my own could gauge price elasticity of demand to determine how low the taxes might go before they result in a net loss for state revenue. A low gas tax could place Rhode Island at a clear advantage—something it already enjoys to a slight extent in relation to Connecticut. Then again, legislators in the Ocean State clearly haven’t yet fully assessed locational advantages: the gas tax in Massachusetts, the other neighboring state, is nearly 10 cents less than Rhode Island (and ranked #30 in the nation). Thus, if Rhode Islanders want to save money, they could just as easily go to Massachusetts to fill up their tanks, as long as they live close to the state line. And, let’s face it: if you’re in Rhode Island, you’re never far from a state line.

2 thoughts on “Tanks on the border, but it isn’t a military strategy.”