Station Plaza: a strip mall of churches is hardly a shopper’s heaven.

I’ve spotted the storefront church numerous times in the past, both in strip malls and in conventional main streets. Rarely (if ever) have I described it with flattering words. It’s not that I harbor any hostility to the exercise of religion, nor do I feel that church plantings need to take place in conventional ecclesiastical architecture. Far from it.

I remain cynical about the storefront church phenomenon because it reflects a degradation of land uses, of land values, and of a municipal tax base. From a public administration perspective, it’s an almost unequivocal bust: a lucrative structure that used to attract for-profit businesses now hosts a tax-exempt institution. From a real estate and property management perspective, it’s not quite as bad—a church tenant is better than no tenant at all—but I can safely assert that no property management company actively recruits churches as tenants. They’re a consequence of steadily declining leasing rates, as foot traffic in the area falls, and a newly planted church (with little to no capital) typically rents space in a cheap commercial, building because it’s all the founders can afford. And, since a church contributes virtually nothing to foot traffic outside of Sunday mornings (when all the neighboring businesses are still closed), the downward spiral continues. About the only entity that benefits from a storefront church is the congregation, which can enjoy a discrete structure superior to the pastor’s living room. And easy parking close at hand. For many fledgling houses of worship, that’s good enough.

I suspect that the defeatist undercurrent that gripped the City of Euclid (a suburb of Cleveland) explains why it took the “good enough” approach five years ago. At that point, the city’s flagship Euclid Square Mall had lost over 90% of its conventional retail tenants. Its second life emerged through about two dozen churches filling the vacant storefronts, bringing the dusty halls to clamoring life each Sunday morning. The renaissance was enough to attract national media attention. But the leasehold agreements left the mall so empty through the rest of the week that, despite all efforts from the property managers, it never secured more than a couple little mom-and-pop stores. No matter how lively those churches might have been on Sunday mornings, they weren’t bringing in enough to keep the mall in the black. By late 2016, the City of Euclid condemned the deteriorating property due to safety concerns and tax delinquency.

Incidentally, even in the wake of Euclid Square Mall’s closure, numerous other struggling malls across the country have followed its example and leased considerable space to religious organizations. This Business Insider article heralds these storefront churches as triumphant adaptive reuse. Judging from the photos, some of the congregations really do seem vibrant. But they only serve as evidence of the mall owners’ desperation, and they decimate the original taxable assessed value of these huge properties. They’re hardly a success for the school districts that depended upon property tax revenue to supplement their budget.

And, not surprisingly, malls are hardly alone in this devolution. 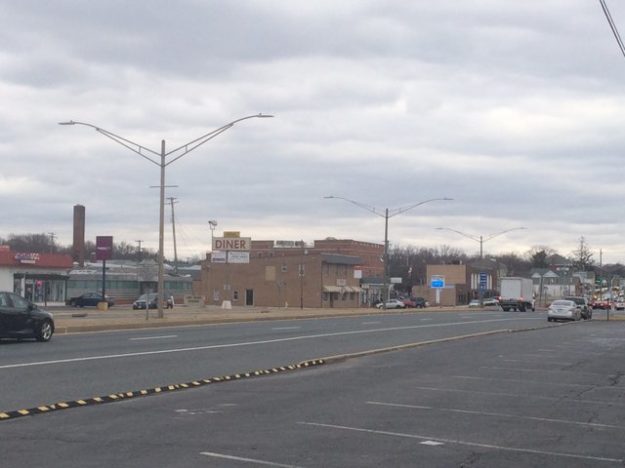 This arterial, bisecting the city, probably comprised the majority of Aberdeen’s auto-oriented commercial development up until the 1980s. But at that point, the Aberdeen Throughway (Maryland Highway 22), which links the old town center with Interstate 95, began to overtake U.S. 40 in commercial pre-eminence. Today, Hwy 22 claims a Target, Home Depot, hotels, and numerous familiar restaurant brands. But U.S. 40? It’s got a strip mall where half the tenants are tiny churches. 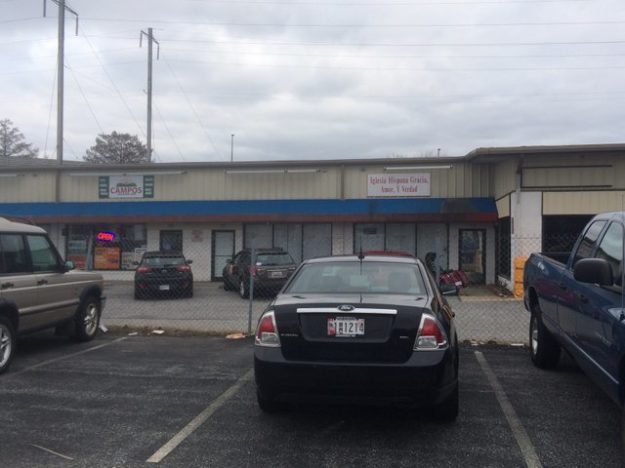 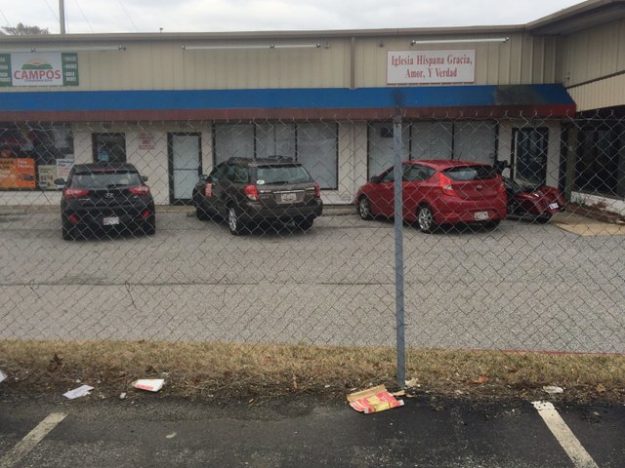 I’d wager that Station Plaza hasn’t been a savory shopping destination for decades, but today it’s hard to see why any business owner with options would even consider the space. The auto care center on the one end seems to be the only profit-driven entity in the entire complex. Beyond that, the remaining tenants probably genuinely do have few other options: that is, they’re storefront churches. To the right in the photo above is a Spanish-language iglesia, completely empty (not surprisingly) on a Wednesday afternoon. Let’s pivot further to the left. 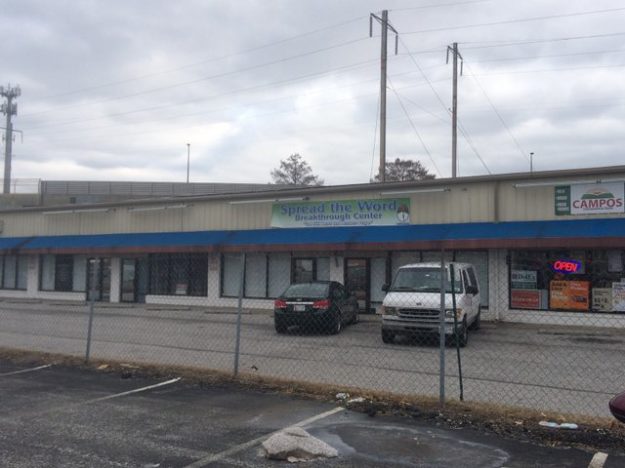 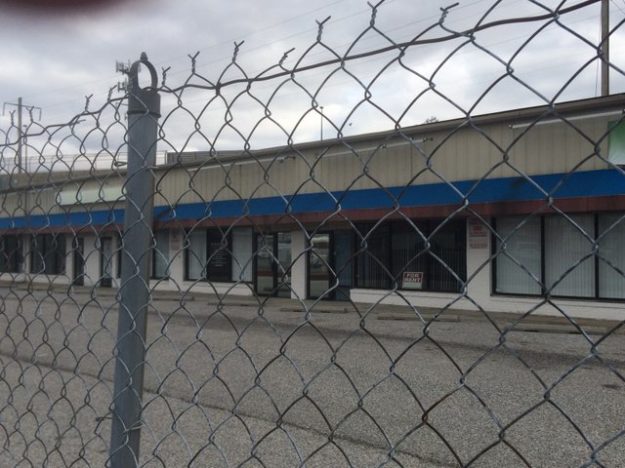 Looks like quite a few of the storefronts remain vacant. But we can always zoom on one suspect: 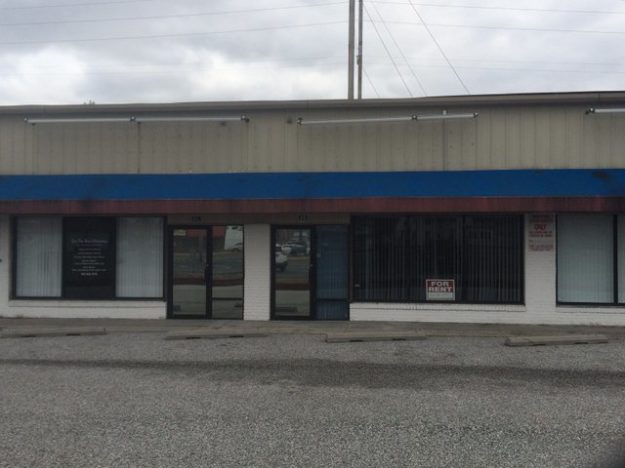 The decals on the left-hand window say “Eat the Word Ministries”.  Still occupied.  And the religious theme continues to the end. 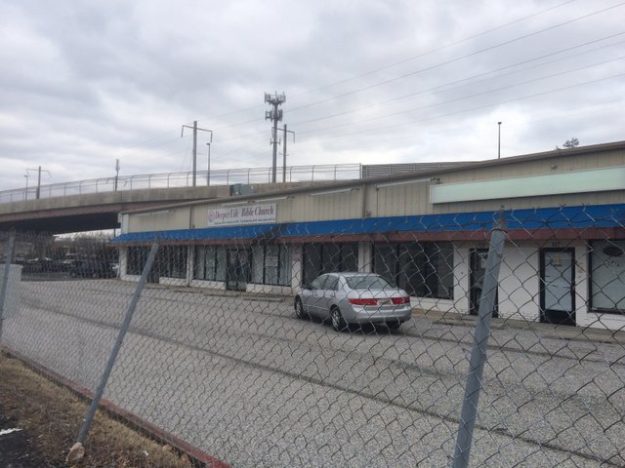 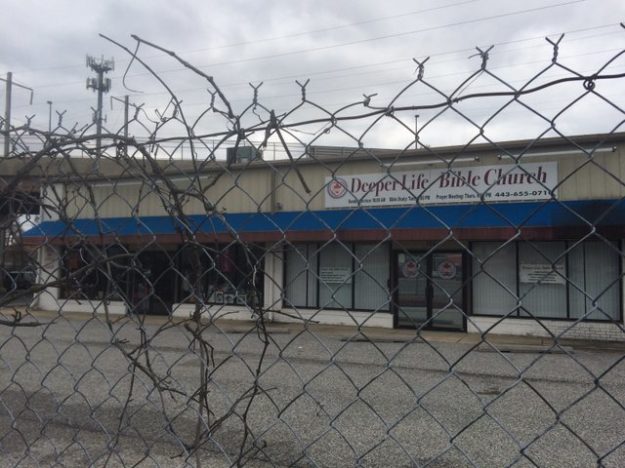 The final storefront at Station Plaza is an exception, in that it actually seems to sell durable goods. But it didn’t have a name and may just as easily serve as storage, or a knickknack shop “open by appointment only”. One of the few other non-religious storefronts was also closed: a title loan establishment called (appropriately) Heavenly Titles.

In defense of the City of Aberdeen, I’m not sure Station Plaza would succeed even if another commercial corridor nearby hadn’t hogged the limelight. It’s a seriously unaesthetic place, and the presence of the chain-link fence in the foreground suggests that two separate property owners can’t even forge an agreement on sharing their parking spaces. Thus, we witness this bizarre configuration where the parcel closest to the street (where I stood to take the photos) has a barrier that keeps one from walking to the struggling strip mall behind it (set back about 100 feet from the highway). While it’s still easy to discern all the storefronts behind the fence, it imposes a silly and uninviting barrier. At this point, about half of the leasable space at Station Plaza consists of churches. 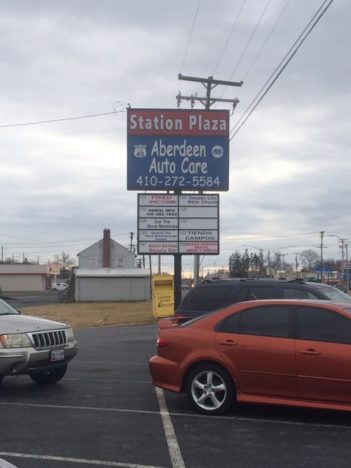 Given the socioeconomic and infrastructural obstacles, I suppose Station Plaza is a qualified success. But, like far too many retail centers these days, it’s one that only enjoys the benefits of its tenancy a few hours a week. At the rate in which retail is imploding, within a few years we’re likely to suffer such a surfeit of strip malls that the leasing rate for a storefront will be reasonable enough for a 10-year-old to run a lemonade stand. Then again, kids these days could just as easily operate their biz out of their bedrooms. And how would their customers buy the lemonade? Easy—there’s an app for that. 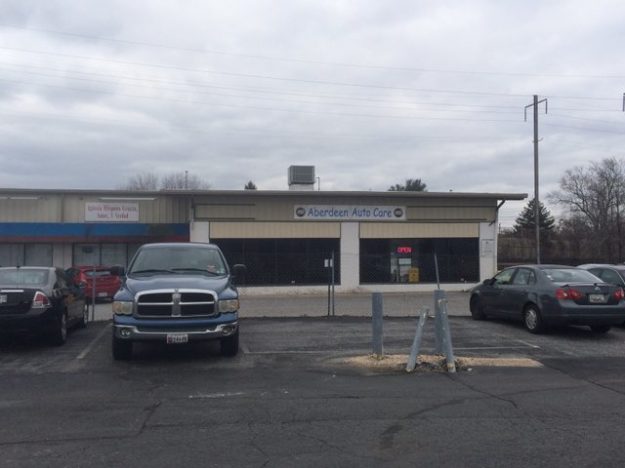 While I have a sneaking suspicion that Aberdeen Auto Care owns the entire Station Plaza parcel and does what it can to keep the albatross flying, I also suspect that this comparatively recession-proof enterprise is all that’s keeping the entire structure from mothball status. If Auto Care leaves, Station Plaza’s occupancy will collapse within a year…if the roof doesn’t collapse before then. But hey—maybe storefront churches really are a boon that leads to bigger and better things. After all, now that Euclid Town Center is kindling, the site is currently getting cleared for a brand new fulfillment center, courtesy of Amazon.com.

PrevGreen street in Seattle: over the long term, will it put the City in the red?
Tanks on the border, but it isn’t a military strategy.Next

2 thoughts on “Station Plaza: a strip mall of churches is hardly a shopper’s heaven.”