Let’s detour to Northampton. Now orange you glad you did?

At this time in 2018—nearing the point when “Happy New Year” seems like a stale salutation—I have yet to post a blog article, and this one is undeniably dinky. But it’s not for lack of ideas or writing activity on my part. Lengthier, more ambitious articles are underway and will emerge in the weeks and months ahead.

In the meantime, I can’t resist highlighting an aspect of the banal that captivates me far too often: poorly thought-out signage. Take this example, in the borough of Northampton, Pennsylvania, essentially a suburb of Allentown just a bit further up the Lehigh River. It’s a good thing the architectural fabric of the town’s main street is a lot better looking than their street signs. 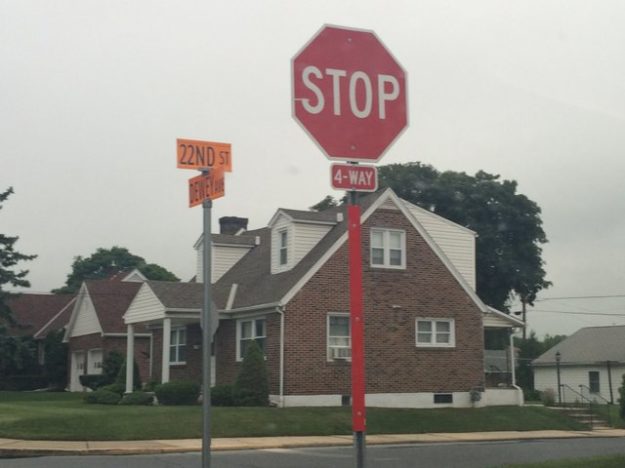 Orange and black—really? I’ve never seen a town use such a color scheme before. I’m a big fan of orange, but even I can see that this is ill chosen. No doubt the choice bespeaks Northampton’s desire to distinguish itself from neighboring communities; after all, the design and coloring of streetscape improvements (especially street signs) is one of the most effective ways of building a localized brand.

But this approach can flop if the executors don’t fully consider the implications of their vision, which I believe is what happened here in Northampton. And we don’t have to travel much further to figure out why: 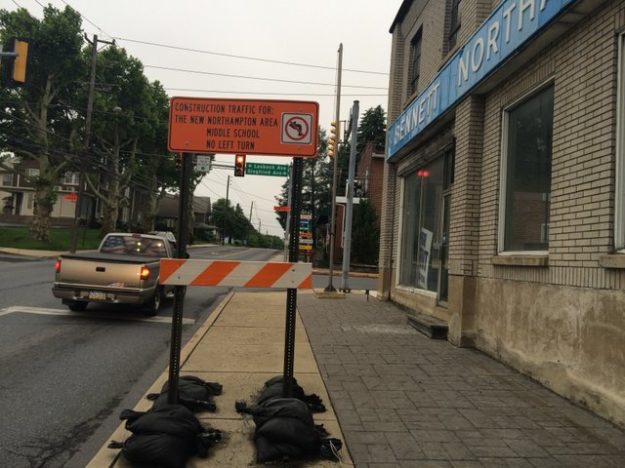 With few exceptions, orange text on a black shield is the color signifying temporary changes in traffic patterns, usually due to construction. While motorists are unlikely to confuse a simple, tiny street sign like the one at 22nd and Dewey with a construction zone, the denotative relationship could push the other direction, in which travelers perceive the conditions of this intersection are temporary. Naturally, such confusion isn’t likely to last long: after seeing multiple iterations of this color combo, the typical newcomer to Northampton will get the idea. But the semantic cues here challenge conventional expectations, and creating conditions that potentially confuse drivers is rarely wise from a public safety perspective.

In fact, national standards exist precisely to promote health, safety and welfare. If every state or municipality could adopt a different appearance to speed limit markings, or hazard alerts, we would never know what to expect—resulting in motorists either overlooking the signs or devoting unnecessary attention to constantly changing symbology that puts less focus on the act of driving. Not wise. The Federal Highway Administration has administered the Manual on Uniform Traffic Control Devices for Streets and Highways (MUTCD) for decades, specifically to maximize safety and efficiency.  Originally developed and implemented by the American Association of State Highway and Transportation Officials (AASHTO), the MUTCD has evolved along with technological changes to vehicles, road design, and improved understanding of optimal safety conditions, amounting to ten significantly updated new editions (most recently in 2009) over the last eighty years. States have two years to adopt the MUTCD as their standard.

Embedded in the MUTCD is a visual language, encompassing basically every color on the wheel. The colors of the shield have varying meanings, so a motorist can glean the essence of a sign fro a great distance—long before he or she can easily read the text. Bearing this in mind, it’s nearly impossible to devise a road sign color that won’t evoke something else, but some colors are clearly more benign than others. Green and blue seem to be the most common, since they already signify traveler information. Brown is also fairly common, especially when a street enjoys a certain cultural distinction, often if a certain segment has an alternate name after a certain dedicatee.

Judging from the Northampton condition, no color combo is completely off limits, and I’m sure we’ve all seen a community that white text on a red shield, an even more alarmist color scheme. While Northampton’s choice may be a deliberate act of defiance, I’d wager it’s mostly a byproduct of leniency towards signage in general. Take a look and an intersection just a hundred feet away from the construction sign. 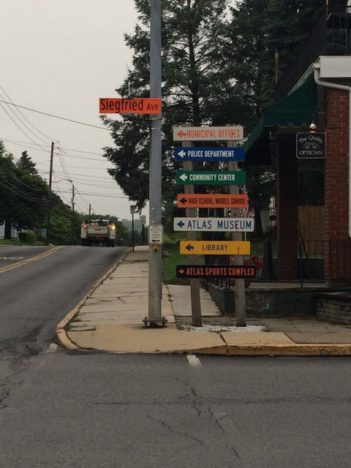 What a clutter. I’d assert that all these colors are an assault on the eyes, but perhaps that’s just my subjective interpretation, because this approach strays from the norm. Most towns would group all the municipal and institutional points of interest on a single sign: one color for the font and another for the shield, thereby endowing them with thematic unity. Northampton Borough has chosen the opposite approach, perhaps with the expectation that using a different color for each sign helps the various items stand out from one another. I’m not enough of a semiotician to judge if this strategy is effective, but in my opinion it still conveys disunity and an overall absence of planning.

Signage, in fact, undergirds so much of municipal planning that it often gobbles up a disproportionate amount of space in a zoning code. The American Planning Association routinely offers seminars informing practitioners of new conventions in regulating signs, well beyond the scope of MUTCD into the realm of private businesses. Most communities have decided they value the legal costs necessary in developing good sign regulations, to the extent that places lacking them are the exception. Northampton most likely is a bit more lax than the average American town, but we only have to travel a few miles to the east to find a place that has truly adopted an “anything goes” approach. In the Borough of Wilson, just about any private business can create a directional sign at key intersections. They’re everywhere! But at least they all use the same (presumably regulated) color scheme. Vive la difference.

PrevCityWay Phase Two: retail retreat and its impact on the street.
Service station sentimentality: frozen in time without spending a dime.Next

7 thoughts on “Let’s detour to Northampton. Now orange you glad you did?”