Green street in Seattle: over the long term, will it put the City in the red?

By this point, the term “green building” has more or less entered common parlance: even if a sizable majority of people don’t know exactly what it entails, they can form a reasonably well-educated guess from the adjective. And, extending those contextual cues, they can speculate with similar accuracy on “green design”, since it loosely applies the same figurative use of “green”. Then there’s “green construction”. And we all should “think green”, and do our best to “live green”. Maybe, to a certain extent, at least some of us ascribe to the principles of the Green Party. Rinse and repeat.

And while we can probably stretch those same semantic fundamentals to speculate on what a “green street” might look like, the reality may not align with most people’s perceptions. The City of Seattle, though, is striving to bring a certain green street incarnation to sundry neighborhoods across the municipal limits. And, in the spring of 2014, the City officially cut the ribbon on the first of its green streets. 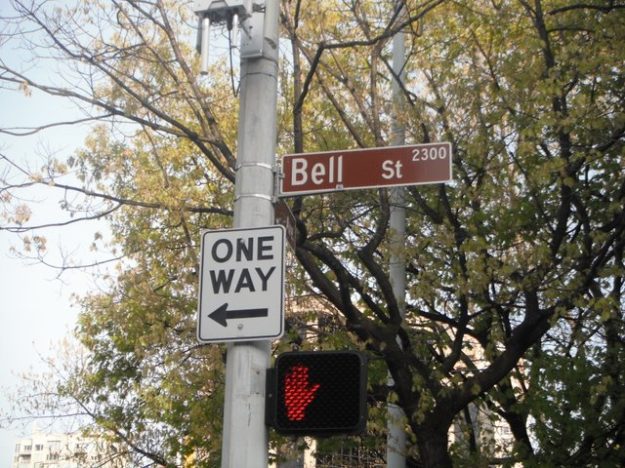 Bell Street may share the surname of the Belltown neighborhood that it sprawls across, but it’s hardly the primary arterial. In fact, it’s little more than a local road that links the popular Denny Park to the north with Pier 66 along the waterfront. It does, however, sit squarely within its neighborhood, a formerly underutilized industrial quarter that has exploded in recent years with mixed use development. As a result, Belltown has metamorphosed into a primary arts and entertainment district just northwest of downtown and Seattle’s most densely populated neighborhood. Concomitant with this growth in population came a demand for green space, which this nascent green street aims to satisfy by unconventional means. 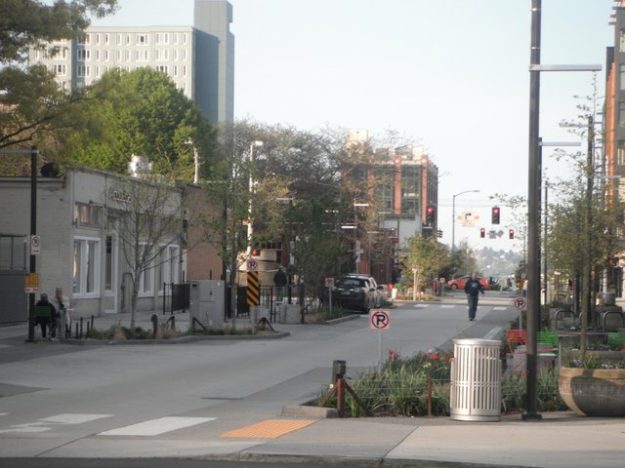 Sure, it’s still a street, affording access to all the residences that front it. And the predominant color remains the gray of its various paving surfaces, not the green or even the emerald from which Seattle has earned its nickname. But the figurative green of “green design” rarely achieves that literal combination of yellow and blue. Regardless, Bell Street is unequivocally greener (in the figurative sense) than your average urban residential street. 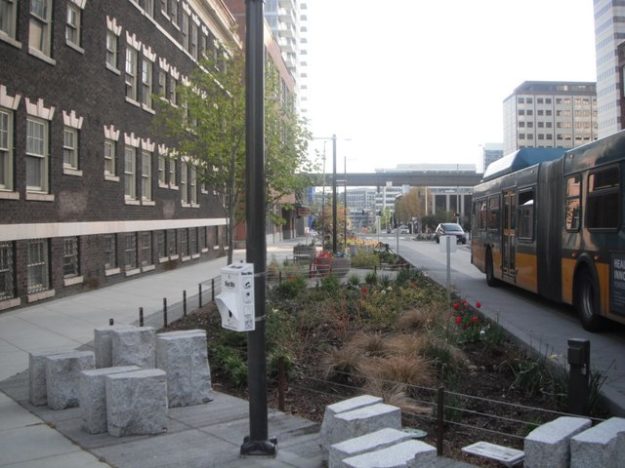 Previously two lanes and one way, Bell Street has, thanks to the City’s interventions, morphed into a one-lane street across four blocks (still one way…obviously), where pedestrians, bicyclists, transit and cars share the cartway equally. The strategic, regular placement of rain gardens at the shoulders not only add to the verdure and help manage stormwater in this notoriously rainy city, they appear in alternating fashion on either side of the street, resulting in a chicane-styled formation that forces vehicles to swerve, slalom-style, and preventing them from moving too quickly. 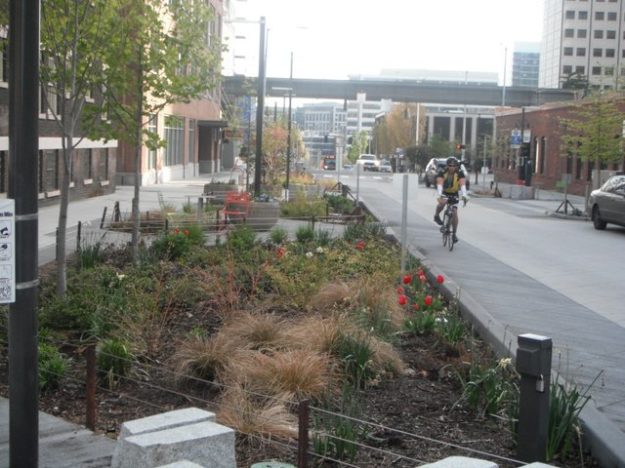 The design is slightly more visible on the photo below, in which a bicyclist approaches Bell Street on the right side. 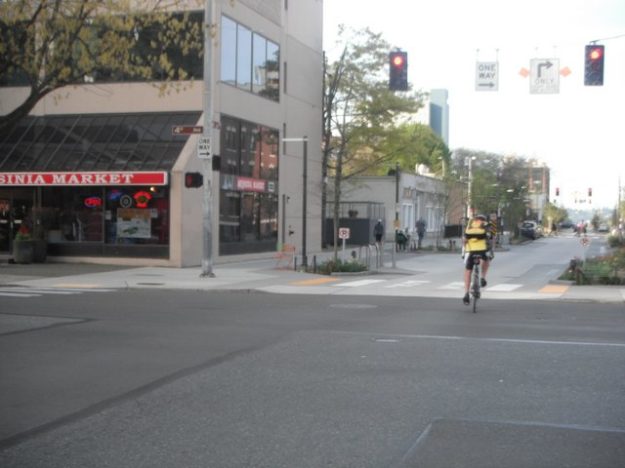 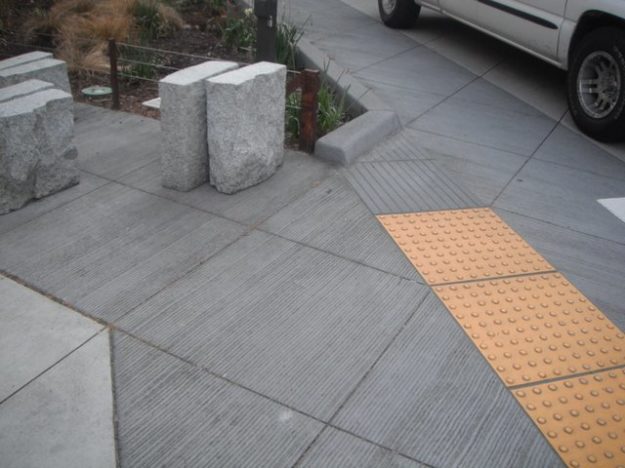 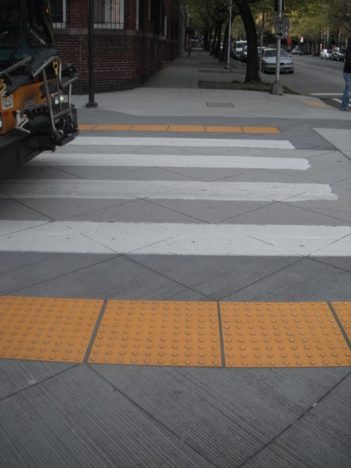 A narrative from National Association of City Transportation Officials (NACTO) provides a much more detailed description of the amenities conferred to Bell Street, some site plans, and a few superior before/after photos. The overall impression is that the green street offers a reprieve for non-motorized traffic, without ever fully excluding vehicles. Most of the road-diet and traffic-calming strategies are fairly conventional, but I was particularly taken by one that is visible in the photo below: 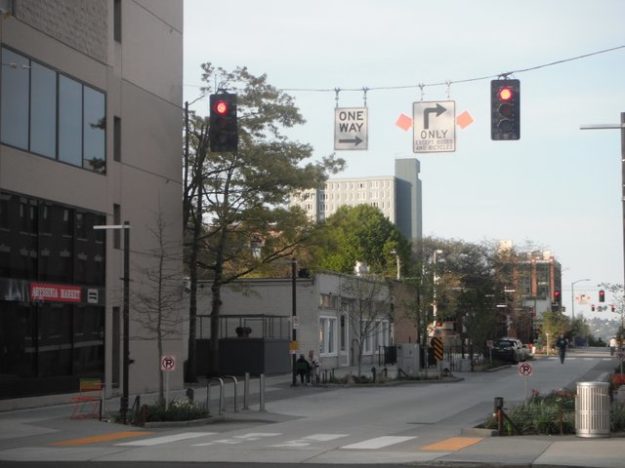 Can you see what I’m talking about? If not, here’s a closer look: 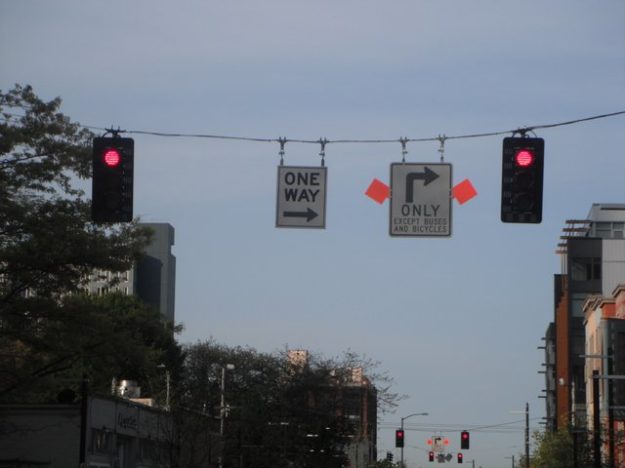 Each intersection forces a right turn, though buses and bicycles are exempt.

While I’m sure this strategy exists at least somewhere else in the U.S., perhaps on roadway even shorter than Bell Street, it’s obviously rare. About the only other time I’ve witnessed forced right turns at a four-way intersection was in certain neighborhoods in Chicago, but in those cases (to the best of my understanding), the design intended to deter speedy vehicular escapes in high-crime areas, and City of Chicago re-engineered the four-way intersection into two tangent 90-degree angles, resulting in a physically forced right turn rather than a regulatory one, as is the case in Seattle. The traffic management tactic on Bell Street is apparently a late-stage addition. According to the NACTO article, the installation of the chicanes, bulb-outs, and other more conventional traffic calming measures did not substantially reduce the daily volume of cars much more than 10%–which was insufficient to elevate the street into a welcoming linear park for pedestrians. Six months after the spring 2014 opening, the City introduced these regulatory effects, which compel motorized vehicles to turn off of Bell Street at the first opportunity. Thus, the green street is not a through-street, and motorists who seek to traverse between Denny Park and Pier 66 must choose one of the neighboring streets.

The tactic seems to have successfully reaffirmed Bell Street’s new function as a green street, a demi-park in a high density area where the comparative scarcity of privately owned yards consequently puts public green space at a higher premium. I’m still not sure what I think about it in terms of the functional classifications of roads, for which the FHWA provides a more nuanced breakdown, but the fundamentals are what most of us know (or can easily figure out): primary arterials, secondary collectors, and tertiary locals. Arterials are fewest in number and the design should emphasize efficiency and distance traveled over higher speeds, while locals are more about maximizing access to the land cover, typically at lower speeds because they serve mostly residential areas. Bell Street in Seattle fell under the “local” classification prior to its conversion to a green street, and, today, it remains local. By most metrics, the forced right turns do not undermine its functional classification, since local roads by design to not serve motorists well for going long distances. So, by this metric, the forced right turn works just fine.

However, local roads in urban settings operate differently from their rural or even suburban counterparts. Relatively few suburban local roads—often curvilinear and terminating in cul-de-sacs—serve anything other than very low-density residential. Urban local roads often remain constrained to a grid, which is the most efficient configuration for handling a density of users that engage with a higher variety of land uses: residential, commercial, retail, perhaps office or industrial. And forced right turns undermine the very interconnectedness and versatility that serves the urban latticework so well. The photo below effectively delineates this predicament: 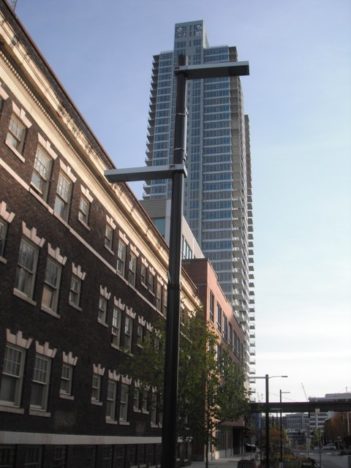 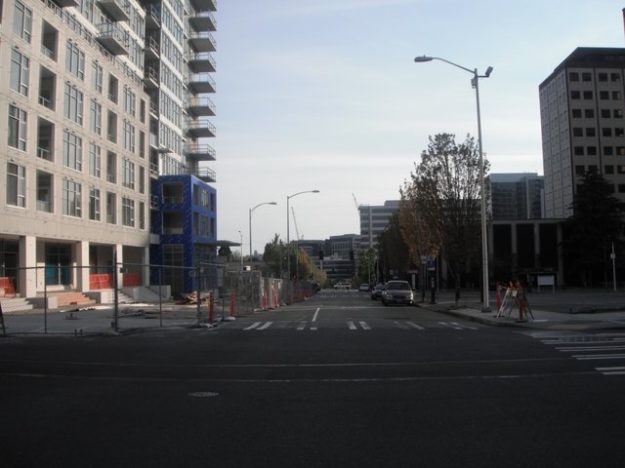 On a northern end of the area in question, just a bit outside of its “green street” improvement, an incipient skyscraper presides over the minor residential street. Not yet complete when I took these photos (spring of 2015), the skyscraper now injects a tremendous residential density onto the streets that it fronts, including modest Bell Street. The streetside pocket parks no doubt appeal greatly to the skyscraper’s many residents, and presumably the majority of them capitalize on the walkability of Belltown by minimizing their use of private vehicles. But a residential high-rise at this scale will inevitably reintroduce some of the traffic volume back to Bell Street—the same condition the City of Seattle carefully mitigated through both physical planning and policy. And the desirability of the green street in general is likely to encourage other high-density developments in the area, appealing to pedestrians (a plus) but inevitably inducing more traffic as well (a minus).

Such is the double-edged sword that hacks away at virtually all public initiatives, raising new questions as to what true “quality of life” entails and whether green streets—green design, green construction, green thinking in general—will outlast the current era, or if it will eventually go the way of the numerous civic plazas from the era of Urban Renewal, nearly all of which today suffer the epithet “ill conceived”. Then again, with the increasingly popularity of mobile-activated transportation on demand (Lyft, Uber) as well as the emergent self-driving cars, its hard to speculate much on the long term future of green streets, pedestrianism, transit, or even urbanism as we know it today.

PrevViewing the stodgy charms of yesteryear…through a lens from to-day.
Station Plaza: a strip mall of churches is hardly a shopper’s heaven.Next

16 thoughts on “Green street in Seattle: over the long term, will it put the City in the red?”