Axiom number one: as housing ages, the owners/occupants need to maintain it for it to remain a desirable habitation. It makes perfect sense. Yet empirical evidence abounds where this does not happen. In many cases, neither the owners nor the occupants have the financial resources to invest in the property to the degree necessary. Or, in many cases, other exogenous factors have reduced the property’s market viability to the point that any further upgrades are simply an unwise investment. 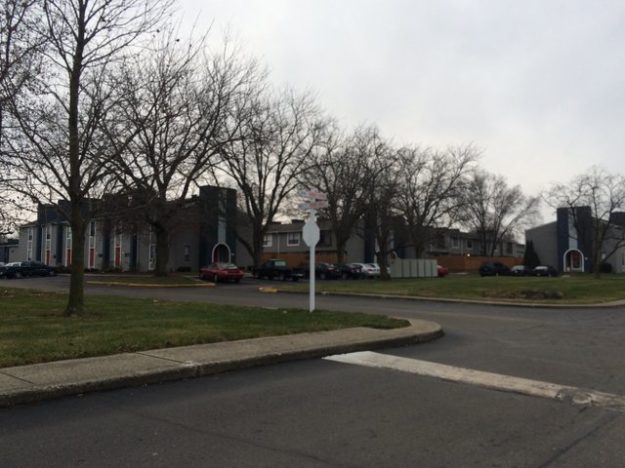 Multifamily housing, in which many discrete units fall under single ownership, amplifies all the principles for this axiom, since it’s rare that the managing entity is going to allow some units to deteriorate while investing heavily in the others. Thus, the individual units in larger apartment complexes are likely to thrive or suffer more or less in tandem. The latter of these two conditions, not surprisingly, creates a far more powerful negative visual impression than a single, poorly-maintained house: whether it is a large, high-rise building or an expansive, more automobile-oriented low-rise campus, the impact of a poorly maintained multi-family housing development can extend to adjacent landowners, vitiating the appeal and dragging down the value of real estate throughout a neighborhood.

From this conclusion we can, without any further contortions, reach axiom number two: that as demand for housing changes over time, owners must not just maintain but upgrade and—in the case of multifamily housing—rebrand the product periodically to help align with that demand. I’ve shown evidence where this has taken place: an apartment complex in Greenwood, Indiana, with a visible “before” (in 2012) and “after” (in 2013), where the facelift may have been essential to stave off serious economic decline. Even after the significant visual changes, the complex kept its name: Westminster.

But I blogged about another apartment complex just a few miles to the north—within the Indianapolis city limits—that underwent a bit more radical of a makeover.  One of my earliest articles focused on the Tuscan Pointe apartment homes of Southport, which surprised me precisely because of the name. Why Tuscan Pointe? Having grown up nearby, I recalled in the 1990s that everyone referred to this apartment complex as Wyandotte Trails. But, after visiting again over a decade later, the complex either changed ownership or the existing owner decided that the image of the rental community needed a complete overhaul, starting with the name.

Nearly another full decade has passed, and now Tuscan Pointe appears to have reached a new phase in its metamorphosis. 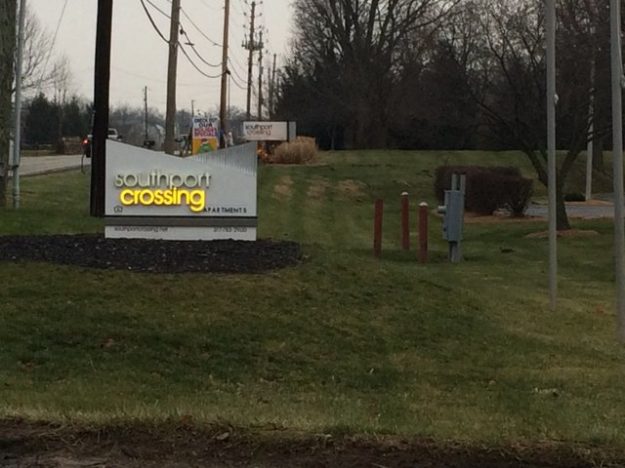 It’s not Tuscan Pointe anymore. It’s Southport Crossing, and this time the rebranding extends to every corner of the complex. When I visited for one of my earliest blog posts (regarding the new Tuscan Pointe name), the physical appearance remained unchanged from the 1990s: a standard, low-slung, gray painted wood typology popularized in the 1970s, as reflected in this old Google Street View image.

Now, under the Southport Crossing name, the management team has reinvented every nook and cranny. 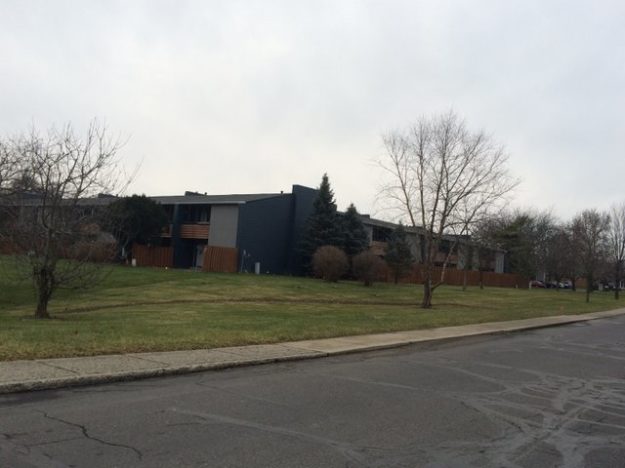 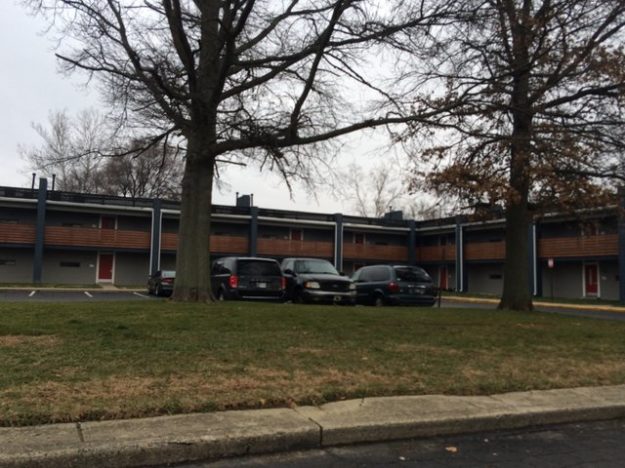 The blue/orange motif certainly gives the complex a fresher look, not just because the paint is new but because it appropriates a color scheme more commonly associated with the sleek look we expect to see among new apartments under development in the fast-growing urban centers. Sure, it’s still an auto-oriented complex in the ‘burbs, but it least it has a different sheen. And the management has extended the branding to details like street signs. 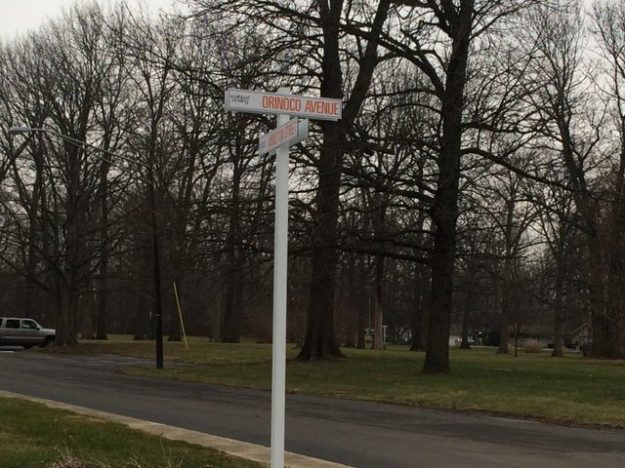 But the most demonstrative modifications are (as is often the case) the subtlest ones, which no doubt reflect the management company’s efforts to accommodate the changing demographics in this part of town. 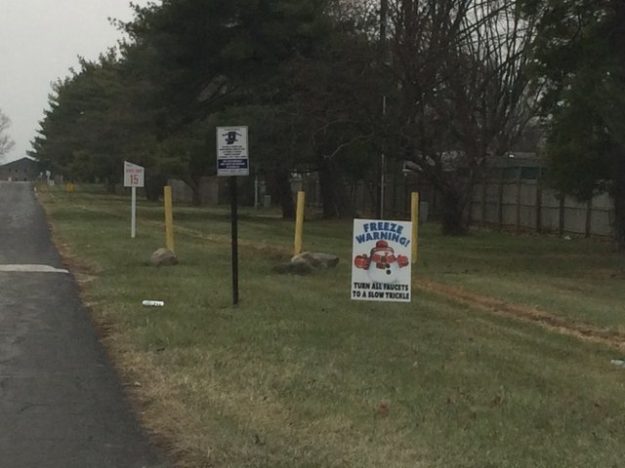 A sign warning tenants about an upcoming freeze is unusual for central Indiana, not because the region rarely encounters December freezes (the first frost usually takes place some point in mid or late October), but because most Hoosiers know how to manage the cold from within their residences. They’re used to a freeze. As I interpret it, this warning sign (spaced at regular intervals throughout the Southport Crossing complex) serves two likely purposes: 1) it indicates that some of the buildings have faced the burst-pipe consequences of a poorly managed winter freeze; 2) a preponderance of the tenants may come from elsewhere, where the climate does not require much vigilance toward freezing temperatures, and they need to learn what’s what. If the signs help safeguard the former, my suspicion is the Tuscan Pointe complex faced numerous problems, possibly due to a combination of age, mediocre construction standards, and the negligence of tenants, who rarely show the same solicitousness toward their residences that one might expect from homeowners. The rebranding to Southport Crossing probably involved far more than a coat of paint; I suspect the interiors underwent a complete modernization, in order for the complex to attract market-rate tenants.

As for the sign’s other purpose, the management at Southport Crossing has probably come to the conclusion that most of its tenants are new arrivals to Indianapolis—possibly new arrivals to the United States. To be frank, I’m a bit surprised the signage was exclusive in English and not also in Spanish, Punjabi, or any of the various Kukish languages spoken by the Chin people originally from Myanmar, who constitute the largest share of political refugees living in metro Indy. Regardless of the motivation for this sign, the shifting demographics of the area has no doubt prompted the apartment management to initiate a few other subtle tweaks, including one visible right at the main entrance: 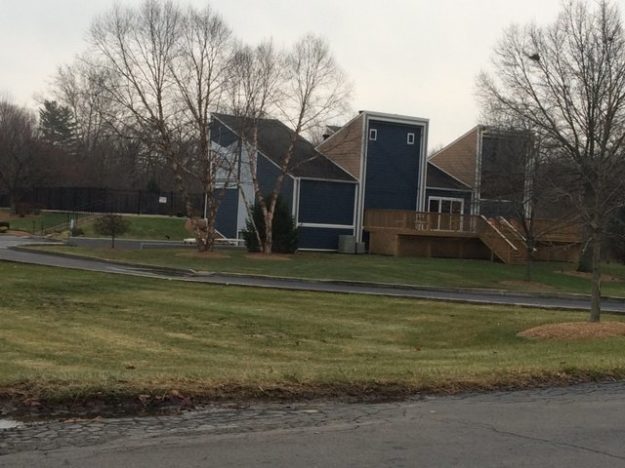 Not surprisingly, the clubhouse building at Southport Crossing received the same color treatment as most of the units, but behind it is a bit more interesting discovery: 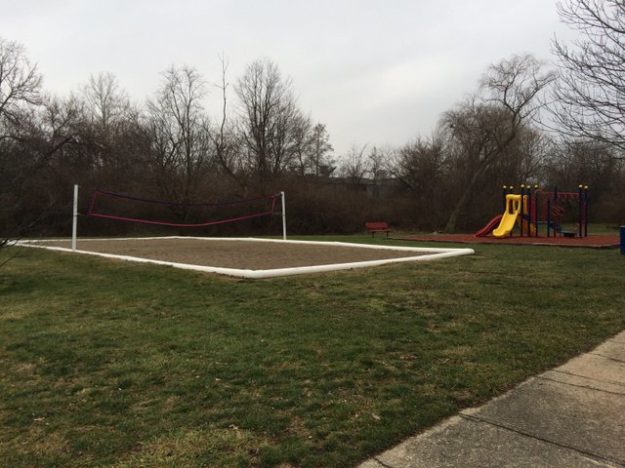 The playground complex features new equipment, a volleyball net, and, most importantly… 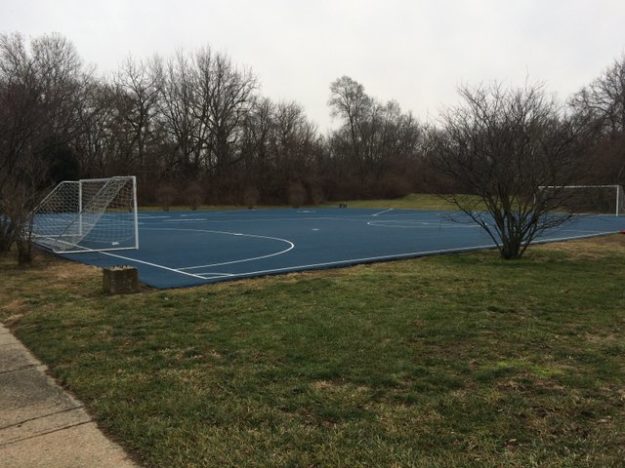 …a resurfaced court for what appears to be a variant of street soccer. In the 1990s, during the Wyandotte Trails era, this patch of concrete hosted two tennis courts. During the Tuscan Pointe era, the tennis courts fell into complete disrepair. 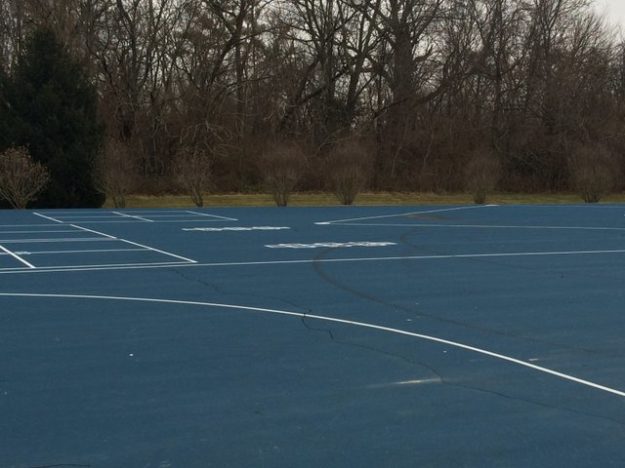 Now, under the name Southport Crossing, the management has repaved the site, modifying the stripes to include hopscotch and four-square, among other games. No doubt the management deduced that the increasingly foreign-born population showed little interest or curiosity toward a revived tennis court; perhaps the results to a questionnaire even revealed that the optimal use for the space as fútbol.

Regardless of the strategy, these investments in aggregate demonstrate a confidence in the rental market on the south side of Indianapolis—a confidence less visible on the west side of town, for example, near Eagledale at I-465 and 38th Street, where numerous developments only slightly older than Wyandotte/Tuscan/Southport languish in desperate need for new landscaping, fresh paint, repaired gutters, and patched pavement. In a near-perfect demonstration of the Broken Windows Theory, these same apartment complexes on the west side are notorious for police calls, drug busts, and even occasional homicides. And apartment buildings have long suffered notoriety for their disproportionately fast depreciation rate compared to owner-occupied units, which translates to a much greater need for routine maintenance and upgrades if they are to retain their desirability and value.

Contrast the conditions on the west side of Indy with Southport Crossing, which, while hardly luxury, certainly demonstrates enough appeal to keep it from the sort of socioeconomic downward spiral that lowers the value homes, commercial centers, or other apartment buildings in the entire area.

Just keep the water running at a trickle when the weather gets cold.

PrevAltamont, Illinois façades: where the upgrade is older than the original.
CityWay Phase Two: retail retreat and its impact on the street.Next