The ramp without a purpose: handicapped design swings and misses.

Public accommodations for persons with disabilities have expanded so significantly in recent years that the juxtaposition of a staircase and a ramp scarcely raises an eyebrow. We see it all the time. And that’s perfectly normal: after all, it’s been the law since 1990.  But how are we supposed to respond when we see handicapped accessible design that falls short of its goals? Take this example, at a storefront near Houma, Louisiana. 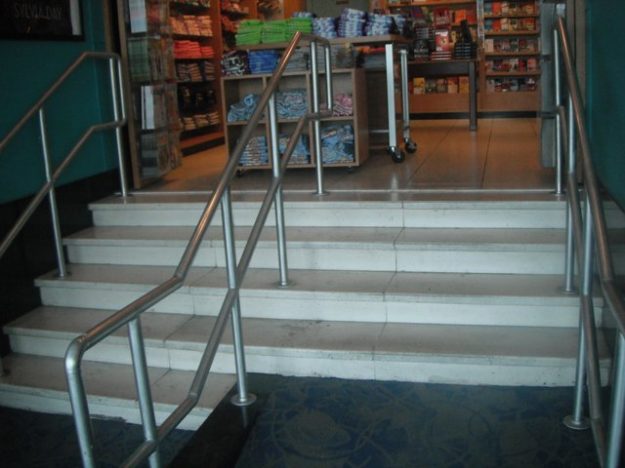 Is it obvious what’s wrong? If not, let’s take a view from another angle. 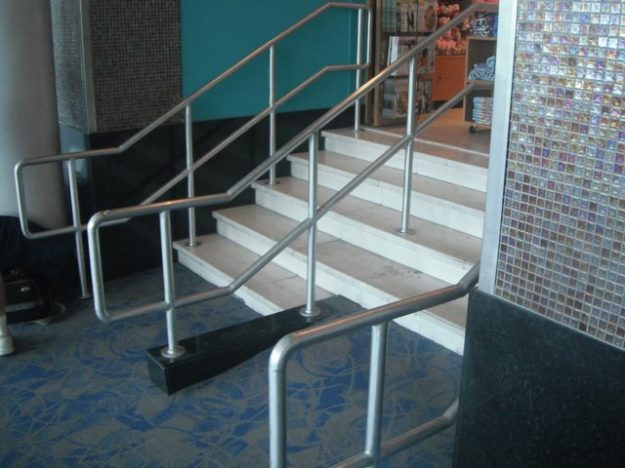 It’s nothing more than a stairwell, without any real accommodations for wheelchairs. But you can’t say they didn’t try. The railing in the middle divides two approaches: the one on the left involves conventional stairs, and the one on the right provides a ramp…for just the first step. Stairs the rest of the way. For a wheelchair-bound individual, this is useless.

Why does this even exist? My guess is it involved a situation where the budget collided with design in a particularly inopportune fashion. The owner’s property was physically large enough that it exceeded the minimum standards that make it compulsory to accommodate an existing storefront with a ramp (per the ADA). But the design was faulty from the get-go, placing the start point of the ramp at the same location as the stairs, only to learn that—as is usually the case—a ramp at that size would be too steep and would violate stipulations. We can imagine, looking at the second photo, that if the ramp were to continue, it would employ a grade change that is not reasonable for a wheelchair to ascend. The property manager realized the mistake halfway through construction, so he/she aborted the project and let the stairs take over, absorbing the cost for non-compliance, which in all likelihood, results in a fine that is less onerous than the construction cost.

That’s just my guess. But it offers all the evidence we need that an elaborate array of building codes and design parameters are essential at making these ramps work. They might seem simple at first blush, but virtually no two stairways are 100% identical, and—if an elevator is not feasible or is cost-prohibitive—the ramp often requires considerably more space in a building whose massing or topographical configuration might not lend itself well to a bulky new accommodation at an entrance. I’ve identified other eccentric solutions in the past, from an outdoor sidewalk along a hilly portion of a city street in Jackson, Mississippi, to an enormous ramp in a building in West Virginia that took up the entire hallway, thereby forcing everyone to zigzag.

Then, of course, when we encounter a failure like this ramp in Houma, we witness the necessity not just for code enforcement, but for enforcement that has actual teeth. It might sound like I’m advocating for governmental heavy-handedness, but, in this case, without it, we encounter a failed Pareto improvement: no one is better off, and the property owner squandered at least a few thousand dollars. Meanwhile, the tenant at the store is unable to sell products to any unaccompanied individual who cannot manage stairs, resulting in a devalued store space.

The average household skateboard ramp has better construction than this. Time to get out that plywood and a handful of nails.

PrevIn Central Falls, a strip mall is still salvation.
How long before the robots tell us “Thank you, come again”?Next

3 thoughts on “The ramp without a purpose: handicapped design swings and misses.”