How long before the robots tell us “Thank you, come again”?

In the suburban fringe of Indianapolis, just within the city limits, patrons of a regional supermarket chain encounter this…um, mural?—as they exit the premises. 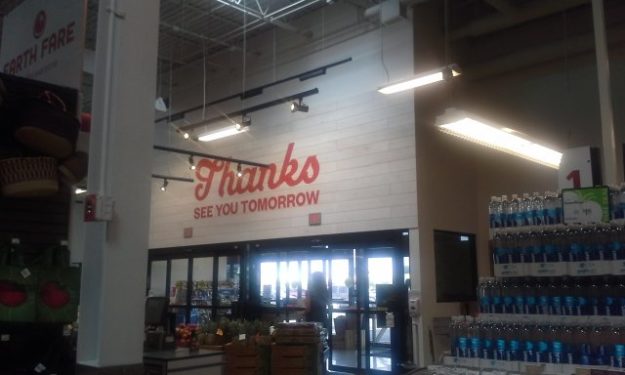 “See you tomorrow.” Clearly it’s a marketing ploy, gently cajoling the visitor into making the grocery trip a daily occurrence. More than anything, though, this sign is a nod to nostalgia, evoking a time when people routinely did shop for their food every day.

But that was ages ago. And was it ever a common occurrence in a place like Indianapolis? The household refrigerator, about a century old, preceded the modern, automobile-oriented grocery store by a few decades, meaning that the average middle-class household had a means of preserving highly perishable goods long enough to obviate a daily shopping trip. And the ubiquity of cars around that same time gave the consumer the capacity to carry an entire trunk full of foodstuffs. Since most households in Indianapolis own a car, it’s hard to conceive of a time when daily trips for groceries would ever apply.

So maybe the sign intends to evoke places where people do shop for food daily: cities like Chicago, Boston or San Francisco. But mostly New York. Only in an area as dense as Manhattan would the housing costs preclude car ownership for the overwhelmingly majority of the customers, thus forcing them to approach the closest grocery store from the angle of a pedestrian. This arrangement, in turn, results in customers purchasing only as much food as they can carry, or that they can wheel out in one of those little collapsible metal carts. And only New Yorkers, living in some of the most expensive real estate in the country, would cherish additional space to the extent that they’d opt for a smaller refrigerator if necessary. (Space is such a premium that many unfurnished apartments in NYC do not include a refrigerator; the tenants have to provide them upon moving in.)

Therefore, the sign at this upper-middle-tier grocer (essentially) tries to signal a profoundly urban way of life to a person in the suburbs.  I suspect 99% of people do not walk to this location. After all, as soon as we might step out these doors, we encounter a vast parking lot, along with the receptacles for depositing the bulky carts provided by the supermarket itself. And most of Earth Fare’s customers live in spacious homes with a full refrigerator and freezer; heck, it’s a safe bet that many of them have a back-up refrigerator in their basement or garage, not to mention a second freezer. The “See you tomorrow” indicator is low-cost, gentle persuasion. Perhaps, thanks to a variety of organic and eclectic offerings at this smaller a competitor to Whole Foods (whose high-profile struggles and subsequent Amazon buyout revealed the encroachment within the natural foods empire), its merchandise will entice some patrons to visit more than once a week.

But does that ever happen, even in New York? Manhattanites may lack the floor space to support voluminous refrigeration—and thus need to shop more frequently than those in the suburbs—but that doesn’t mean they have a greater craving for homemade food. The number of restaurants on the island alone—far more than anyone could count—bespeaks the residents’ penchant for dining out. And even though the high cost of car ownership and easy parking prevents people from carrying the huge quantities that suburbanites can stash in their trunks, they can easily rent cabs or ride-sharing services. Or they could just opt out of keeping much food in their homes altogether. In fact, Manhattanites put such a low stock on food storage that many have even chosen to scrap a refrigerator; they’d rather use that precious floor space for something else.

In an era where most retail is reeling from the rising popularity of online shopping, groceries have generally held their own, up to this point. Sure, online grocers like FreshDirect have taken a nibble in the supermarket industry—particularly in the aforementioned large cities—but most people still prefer traveling to a grocery store and selecting their own produce. However, the growing popularity of meal kit services like Blue Apron are encroaching on the market from another angle. And who knows what Amazon has in store, not just in terms of how it will reinvent Whole Foods (its recent acquisition) but how it will reinvent how we access food in general. The competition is fierce enough that the small players like Earth Fare need to devise clever strategies all their own—and even if a “See you tomorrow” directed toward car-dependent suburbanites isn’t the answer, at least it’s an approach.

PrevThe ramp without a purpose: handicapped design swings and misses.
Altamont, Illinois façades: where the upgrade is older than the original.Next

14 thoughts on “How long before the robots tell us “Thank you, come again”?”