Altamont, Illinois façades: where the upgrade is older than the original.

Whether we measure it in square miles or a single street corner, the average American downtown is enjoying an unprecedented new life. Century-old commercial buildings—underutilized at best, mothballed or abandoned at worst—have comprised the most visible beneficiaries of this revitalization, since investors have reassessed their value as critical signals to the municipality’s historic origins, determining not only that we should spare them from the wrecking ball, but that they’re perfectly capable of serving modern enterprise, after applying a little bit of elbow grease. As a result of this reawakening, virtually every American town center has benefited from the preservation of at least one building over the last twenty years. And while some towns obviously strut their revitalized bling more effectively than others, few places actually look worse than they did in 1987. Quite a few look great.

While few if any towns have discovered a single magic bullet toward a completely revitalized central business district, most seem to recognize at this stage that it’s better to accentuate historic features than to whitewash or completely shroud them. This ethos is almost antithetical to the often half-hearted revitalization efforts of the 1950s, when municipal leadership first noticed that historic business districts were seriously losing ground to automobile oriented shopping malls. At that point, the malls embodied all things sleek and contemporary; town centers suffered from the perception of being outdated and inconvenient. The same unpretentious three-story brick buildings that we celebrate today suffered increasing obsolescence. Property owners, in a desperate attempt to compete with the suburban plazas, demolished the most neglected buildings for expanded parking lots. As for the more salvageable buildings, they sheathed them with space-age inspired synthetic skins that made them look more modern. In some cases, this cladding concealed the upper windows completely: more likely than not, it didn’t matter because the upper floors had ceased securing any tenants. A few years ago, I blogged about a perfect example of this centempo-façade in Thibodaux, Louisiana. Around 1960—when I suspect the owner installed the façade—the repetitive pattern with twin spires mimicked other gestures of the futurist architectural movement—something akin to Oscar Niemeyer’s Brasilia, The Jetsons cartoon, or—a bit closer to home—the average wonderland logo of a suburban shopping mall. 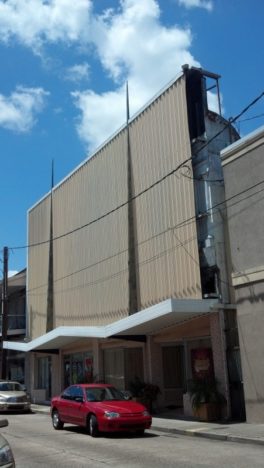 These days, not surprisingly, such facades are an anachronism. They’re not sleek, they don’t enhance the building, and they might even render it less marketable because they impinge upon the usability of those upper floors, filled with windows that could serve a tenant well in this day and age. Today, the most invasive fake façades get stripped to unearth the orderly fenestration underneath. The nostalgic property owners might save some of the quirkiest examples, simply because futurist and Googie vernacular is even rarer now than late 19th century Italianate. Generally speaking, though, the overriding cultural preference for American downtowns is calibrated salvaging of authenticity…a deliberately nebulous phrase that could easily signal a variety of niche taste cultures. All and all, the average owner of a 19th century downtown property would add value to the structure if he or she restores it as closely as possible to its original appearance.

Taking this dichotomy into account—the interplay between old buildings and their ersatz, mid-century modern façades—it came as a bit of a surprise to encounter a completely different treatment a few years ago in the town of Altamont, Illinois (population 2,300). 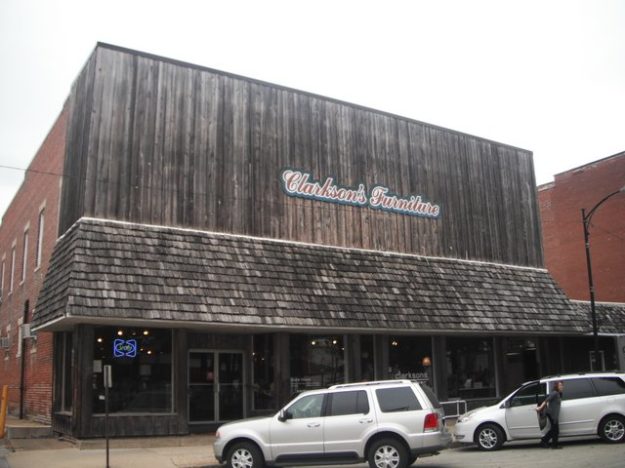 The building itself follows the standard urban form one would expect of a town this size. But instead of sheathing it with space-age gestures, the owners decided to do the exact opposite and foist the building’s appearance backward in time…to something like the pioneer prairie.

Yes, it’s just as fake as the frontage in Thibodaux. 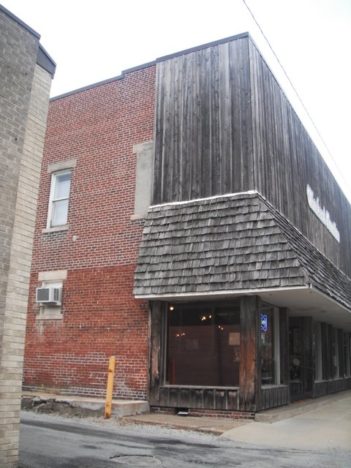 And it’s an outlier: other neighboring buildings on the same block retain the more conventional bricked appearance. 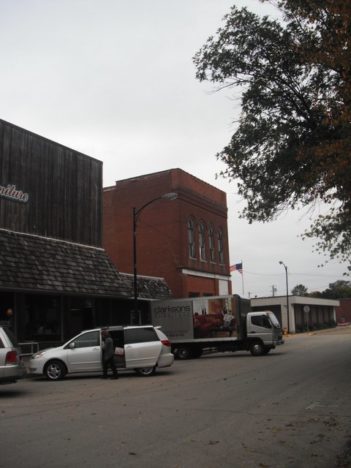 Regardless of whether the building housing Clarkson’s Furniture is owner-occupied, the business interests have collectively decided to adapt an appearance more akin to Wyoming or western South Dakota than central Illinois. There’s nothing wrong with this, and it’s likely this façade went up at a completely different time period than the space-age contraptions fronting the building in Thibodaux. But it’s peculiar, because, in an attempt to upgrade this façade in Altamont, the designers opted for an aesthetic that was older and flimsier than the masonry underneath.

Without knowing anything else about Clarkson’s Furniture beyond its website, I can only speculate why the owners either built or choose to locate in a building that offered a vernacular best described as rustic. No doubt due to the relatively high price, furniture elicits high “elasticity of supply design”, if you will (to appropriate an economist term). That is, people often know what they like or dislike and will often reject an entire company’s merchandise if their initial impression of its style doesn’t comport with what they’re seeking. My guess is that Clarkson’s has recognized that a conservative approach is better suited to its clientele, so the latest Danish imports aren’t going to fly in greater Altamont. Bearing that in mind, a futurist façade, albeit 50 years old, is likely still to come across as unorthodox and unappealing to many. Heck, even the original brickwork may be inappropriate; at any rate, it’s less likely to stimulate the senses than unpainted wood. In short, the façade, however visually jarring in central Illinois, may prove the perfect fit for this milieu.

Altamont isn’t thriving, but, when I took these photos (in fall 2012), the five blocks of its commercial district—centered around a triangle where Main and 2nd Street diverge—seemed mostly occupied and well-maintained. 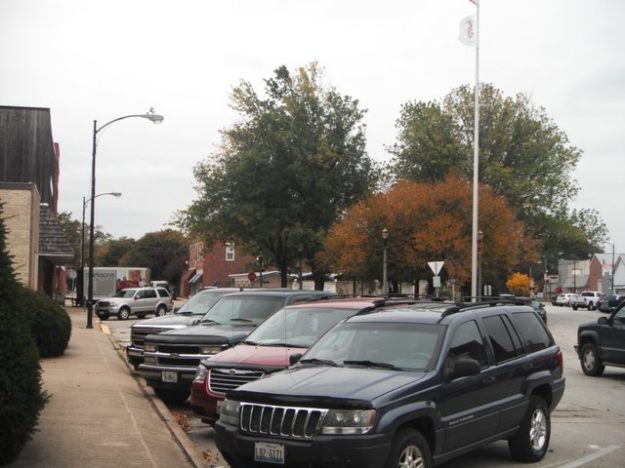 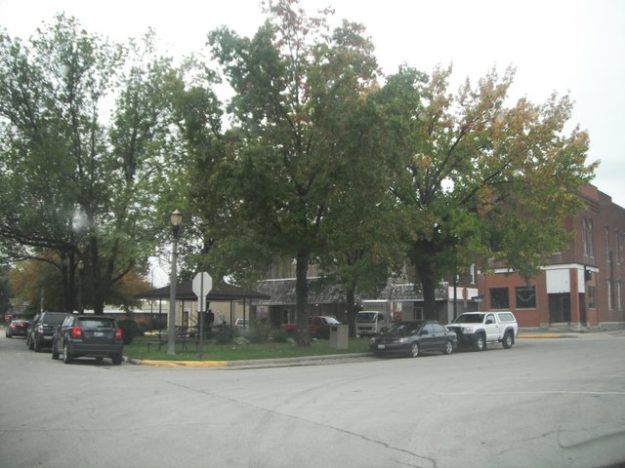 My suspicions are that, five years later, the downtown looks better, with carefully swept streets, scrubbed storefronts, decorative plantings, a few more restaurants, maybe even a microbrewery. Even communities the size of Altamont have recognized the intrinsic value in their old commercial districts. State and county economic development agencies routinely offer competitive grants to the towns that can articulate a clearly defined streetscape improvement plan, much of which goes to the restoration of historic façades. These grants, intended to spur further revitalization, often result in a dismantling of the same Kennedy-era plastic sheaths that intended to revitalize the buildings in the first place. Now they’re coming down, as generational preferences shift toward peeling away the veneer to reveal weathered originals. And then there’s Altamont, which perfectly fits the profile of a town that would apply for such a grant. And maybe, ten years ago, futurist references festooned the main street. Now the only outlier is Clarkson’s Furniture, which replaces the Atomic Age with an Appaloosa.

8 thoughts on “Altamont, Illinois façades: where the upgrade is older than the original.”