Unisex restrooms: a truce amidst the eternal battle.

In an era when unisex facilities have escalated into a nationwide debate, it’s comforting to see that one family operation hasn’t forgotten what its like to be a little lighter on its feet. 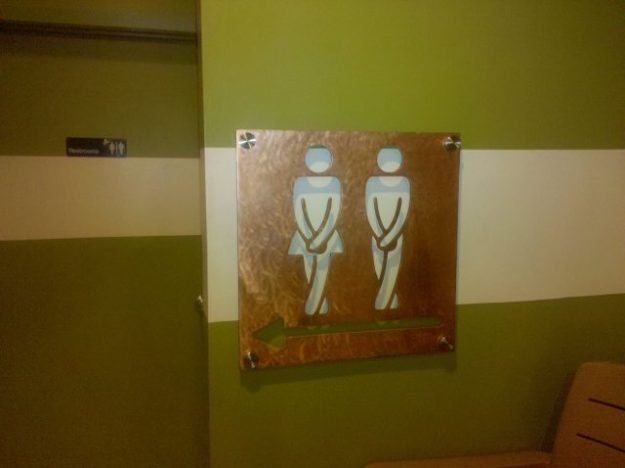 This sign was quite the novelty when I saw it at a café in southern Mississippi several years ago; since then I think it’s become more common.

Concurrent with the decline in national retail, it has become increasingly obvious that locally owned restaurants are consistently outstripping national chains in sales volume. And in restaurants both local and national, we the consumer have almost come to expect that they will offer a creative way of separating—or uniting—the sexes through the signage that identifies those little corner rooms where we’re supposed to pee. Who among us hasn’t encountered that themed establishment that uses either the native language of the cuisine or some salient pun to sequester the restrooms? Needless to say, each time a restaurant attempts one of these whimsical cues, it runs the risk confusing patrons on what otherwise is a basic matter. After all, if you don’t know French, there’s nothing intrinsic to the word hommes that cues an English speaker that it’s male, unless the contextual femmes counterpart serves as the signal. (Then again, if you’re patronizing a French restaurant, knowing the words on restroom doors is likely to seem like pommes petites after dealing with the menu.)

While it may, at first blush, appear that the increasingly ubiquitous unisex bathroom serves to respond to growing consideration of the transgender population, they’ve been around since time immemorial. Take that initial photo: it’s from 2010, which is eons before these accommodations in public facilities reached the mainstream. But mom-and-pop restaurants and coffee shops have featured gender-neutral bathrooms for decades, largely out of financial expediency: plumbing is among the most expensive installations when renovating a structure, and if an establishment lacks equity but needs to maximize leasable space, a second restroom is among the first things to go. Fortunately, most laws and building codes across the country allow a single unisex restroom if the business can only serve a certain maximum number of people at any given time—as long as the door to the restroom has a functional lock, giving the occupant the ability to exclude. (Incidentally, the mounting pressure for gender-neutral restrooms to accommodate transgendered individuals is facing a major hurdle through these same building codes, since larger restaurants/retail nearly always must provide restrooms with an adequate number toilets, doors without locks, and—by virtue of the non-exclusive nature, a separation into two gendered restrooms.)

Thus, instead of two restroom doors, we see one, like the unisex entrance to this tiny little eatery on the east side of Indianapolis: 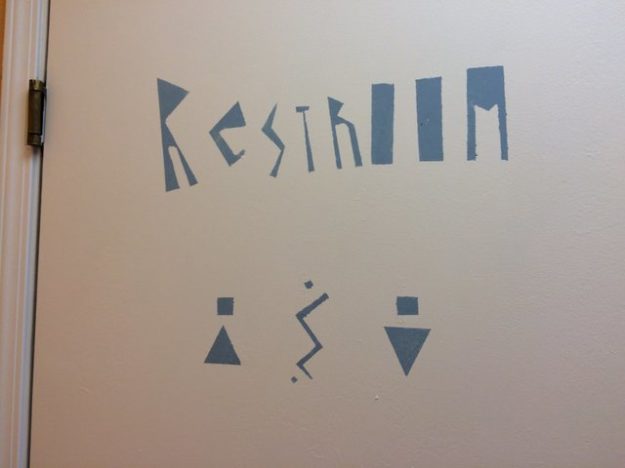 I snapped a pic here because this is among the best I’ve seen. Two symbols for male and female, each consisting of a circle and a differently positioned triangle. Perhaps the most ardent progressives would cavil about this geometric approach to reinforcing stereotypes. It’s easy to guess that the triangle for the woman represents either a dress or perhaps hips—since dresses haven’t been the norm for ladies for a half-century—so does that mean that the inverted triangle depicts the shoulders of a man? Regardless, the juxtaposition is so simple that a four-year-old could figure it out, though of course such a child doesn’t need to do any thinking: it’s gender-neutral. So it’s progressive after all. Not a funny sign per se, but an effective unisex one. And who needs funny on the door to a public restroom; usually there’s enough amusement scrawled on the stalls to keep us entertained…or maybe the best bet is the soap dispenser: 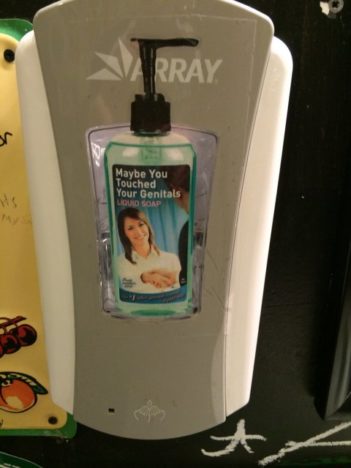 4 thoughts on “Unisex restrooms: a truce amidst the eternal battle.”