Panda politics: a new diplomacy for the nation’s capital.

Some time overseas has kept me out of the blogging loop for much of this month, but I’m back now. And while I work to catch up on something more substantive, I offer this little ursine divertissement, from a bus stop in Washington DC: 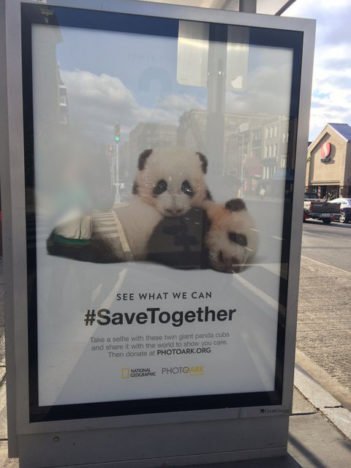 It doesn’t take a great social critic or an expert in marketing to determine the tactic that this advertisement uses. By this point, most of us have figured it out. Giant pandas make a great ambassador for wildlife protection and conservationism in general, for the simple, superficial reason: people love them. They’re cute. National Geographic, the sponsor of this ad, knows this, which is why it chose pandas and not the eastern box turtle—also a specie that the International Union for the Conservation of Nature classifies as “Vulnerable”. As a general rule, turtles don’t evoke the same intensity of emotions as giant pandas—the empathy that would impel people to get selfies next to this display. Scores of other animals, many more threatened than pandas, also fail to drum up much support, to these animals’ detriment. The fact that this poster features panda cubs is another unsubtle feather in NG’s cap.

Why are pandas so effective? Psychologists have attempted to deduce what attracts people to certain creatures over others. Among the strongest unifying characteristics of the animals most commonly perceived as “cute” are a certain innocence, vulnerability, and an evocation of human characteristics—particularly human babies (who of course are unflaggingly innocent and vulnerable). Many of the best-loved mammals have disproportionately large eyes in relation to their heads, again like human babies. Pandas, in turn, have a center of gravity that almost allows them to function as bipeds; they certainly look more like they can crawl or clumsily mimic human walking than, for example, a horse. Yet while they don’t have particularly large eyes—certainly not in comparison to cats—those remarkable black rings accentuate what’s there, much the way the black lips limn what almost appears like a permasmile. These features in turn convey a not-entirely-deserved reputation among pandas for docility (though most evidence suggests they are less aggressive than most other members of the bear family).

Pandas fall comfortably within the shortlist of what someone cynically branded “charismatic megafauna”—those creatures with widespread popular appeal that help loosen purse strings toward broader conservationist objectives. Among the other contenders: the bald eagle, Bengal tiger, the American bison, African elephant, the polar bear and the cheetah. Clearly not all of these species fit the aesthetic mold described above, but all have confidently rooted themselves in the public consciousness for one reason or another, endowing them with such importance it may even influence their overall taxonomy: some subspecies may get inappropriately classified as unique species to draw more attention to the need for resources that will assist in their conservation.

In essence, pandas and the other charismatic megafauna are unwitting pawns in a global marketing ploy. Nothing sinister about this per se, but the China has practiced this for the last half-century in building relations with former adversarial Western powers. The World Wildlife Fund has known this for decades. DreamWorks picked up on it a bit more recently.  And hundreds of individuals have submitted their favorites to YouTube, giving pandas a viewership that might rival that of cats, despite the latter’s domesticated ubiquity. Thanks to the numerous aforementioned aesthetic qualities, pandas young and old serve as a sort of visual clickbait akin to Upworthy featurettes: not sensational or exploitative; merely uniquely capable of stimulating a frisson that, almost parasympathetically, forces the spectator to pause.

It obviously worked for me. And, if that’s not evidence enough of the cultural impact of the entire family ursidae, all we have to do is walk around this DC bus stop to the featured ad on the reverse side: 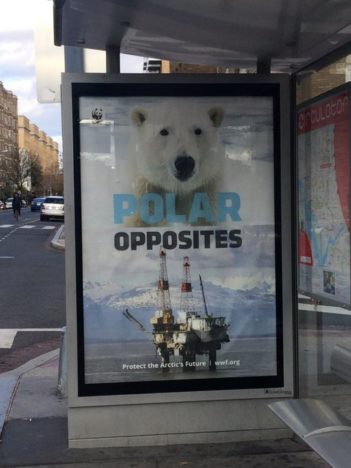 One thought on “Panda politics: a new diplomacy for the nation’s capital.”