When physical malls confront a virtual reality, the brand’s the thing.

Amidst all the talk of mall death—at least some of it from yours truly—it’s becoming easier to spot the retail sector’s outright desperation. When was the last time you visited a chain retailer and were not asked about becoming a member of the rewards program? And how long did it take you to find a staffer on the floor—anyone who wasn’t operating a cash register? And, since no employees seem to patrol the aisles anymore, how long did it take before you came across a display in complete disarray?

It’s not likely to get any better any time soon, and the proof is in the thin parking lots, the increasing dependency on mom-and-pops, the seasonal operations, or even other uses like call centers and mega-churches in those vacant department stores. That apotheosis of suburban living—the enclosed shopping mall—is dying. But it’s not exclusively a suburban phenomenon: most of the downtown malls in third-tier American metros (those with fewer than two million people) have already bit the dust. And now, some of the most income-dense alpha cities are facing the same vulnerabilities. 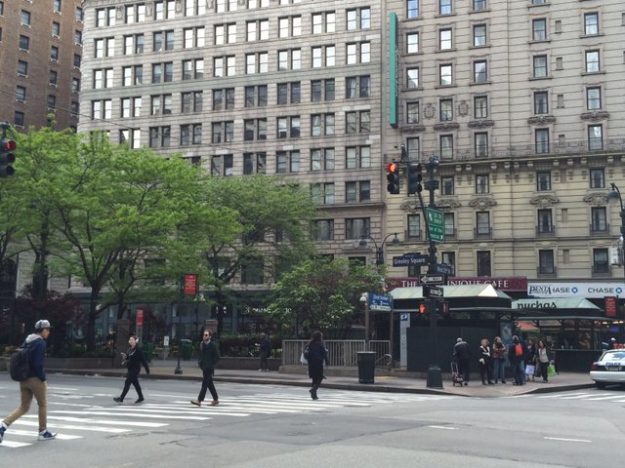 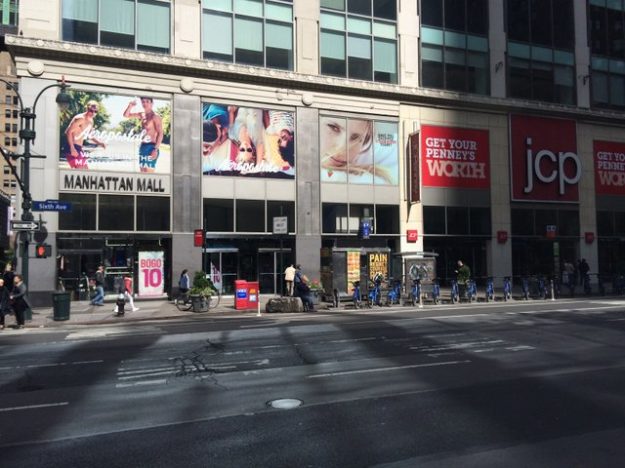 Smack in the middle of Midtown, the Manhattan Mall is hardly a regional center. Metro NYC has at least two dozen larger malls, so this one’s 40-odd stores make it little more than a retail center for the borough itself, if even that. But the astronomical density of workers and residents within a square mile blows all those suburban malls out of the park. It is the most densely populated place in the country, after all.

Nonetheless, the Manhattan Mall doesn’t appear to be doing so hot; it consists of a repurposed old Gimbels department store, a name which today largely survives thanks to its role in founding the Thanksgiving Day Parade, as well as the still-flourishing (relatively speaking) Gimbels spinoff, Saks Fifth Avenue. But Gimbels went bankrupt in the mid-80s; this Manhattan flagship location got repurposed in 1989 as a short-lived center called A&S Plaza after another now-defunct chain, Abraham & Straus, that served as an anchor for part of the tower, while the remaining space went to in-line tenants. The 13-story model that worked for a single department store never emulated Gimbels’s success, and when Federated took over in 1995, it first became a Stern’s department store, then a cluster of smaller, category killer tenants like Steve & Barry’s, then, finally in the late 2000s, a J.C. Penney, which is what it remains to this day. But it’s a single anchor to a mall with relatively few national brand names (at least according to the current directory). And—this might come as a surprise—but J.C. Penney isn’t doing so well.

Most of us already know this, and even if we didn’t know J.C. Penney’s specific woes, we know that bricks-and-mortar retail is struggling, that Penney’s is retail—and, well, we can all complete the syllogism. But J.C. Penney made some bad decisions even well before the demise of the mall hit the mainstream, and it’s broadly visible here at the entrance to the Manhattan Mall. 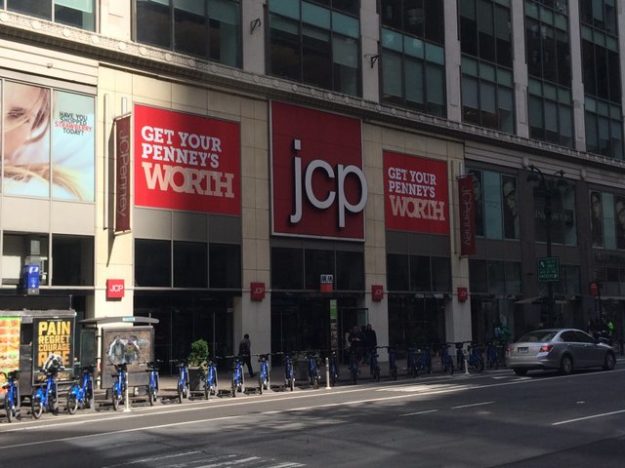 Remember when Penney’s made that brief attempt to re-brand with the chic, succinct “JCP”? And it tanked? And that it was the third effort at logo in as many years? And, after less than a year of plunging sales, the chain went back to the look it had promulgated for nearly four decades? Yeah, it’s the thin, sans-serif font I wrote about at another middling mall in suburban Philadelphia a few years ago, when “JCP” was still the national standard. J.C. Penney’s—now often rebranded JCPenney in text—just can’t make up its mind, and it’s manifest here at Manhattan Mall.

Though these Midtown Manhattan pictures date from spring 2016—long after corporate had given up on the “JCP” and returned to the old standby—the façade still features the short-lived initials. It costs a lot to change logos—and becomes an even shoddier investment when a company re-changes in such a short period. Since not everyone can draw the conclusions they need to from “JCP” (probably one reason the rebranding failed), the murals on either side reinforce the last name that everyone knows, along with a horrible slogan “GET YOUR PENNEY’S WORTH.”  I’m rarely one to thumb my nose at a pun, but this one conveys bottom-of-the-barrel prices, which has never been the aspiration of the nation’s most middlebrow department store. Do they really want customers to think they’re competing with Dollar Tree?

At least they evoke the classic logo with a vertical banner projecting from the wall: 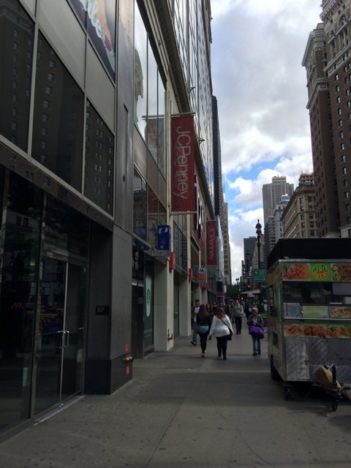 There’s the ticket. I haven’t been back to Manhattan Mall for at least a year, so maybe the owners have changed out the logo by now. But does it really matter at this point? After all, the next biggest name is an even bigger stink bomb: 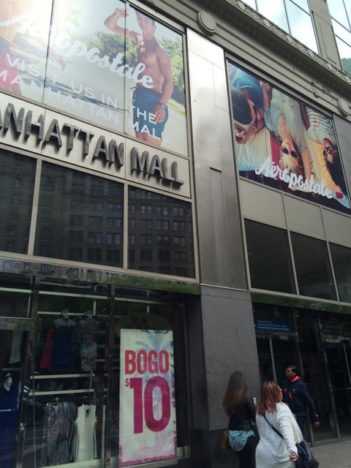 Look above the Manhattan Mall label: yes, its Aéropostale, the teetering-on-the-precipice youth retailer that got delisted from the NYSE about the same time I took these photos, filed Chapter 11, closed a bunch of locations, then—in an unprecedented move—found a buyer for its remaining 229 stores (down from a peak of nearly 800) in the form of a partnership between the REITs of mall managers General Growth Properties and Simon Property Group, who desperately needed the mall stand-by to keep their occupancy levels up. Concurrent with relegation of the Aéropostale name to hospice care was a retooling of the logo, deviating from the tall-caps red it had brandished for decades to a softer, more playful cursive above, which only a few malls—such as the Bridgewater Commons that I blogged about last year–have adopted. It’s expensive to change out all those signs/lights/gift bags! And why bother, when the reality is that Aéropostale, JCPenney, Macy’s and just about every other clothier will most likely live out their remaining days in a virtual marketplace? At least the computer coding necessary to rebrand doesn’t pose any OSHA risks, compared to the good old days, when we put those workers on a ladder or harness, changing those enormous letters above the doorway to a dying mall…suburban or manhattan.

9 thoughts on “When physical malls confront a virtual reality, the brand’s the thing.”