One of the most unnerving characteristics of the built environment is when an alternative taste culture becomes so entrenched and so mundane that we forget that it wasn’t always the status quo. And it’s even worse when this anti-establishment product yields an inferior outcome whatever it was that preceded it. I’m speaking so vaguely that might be hard to understand what I’m talking about. But I’m also playing my hand. As is often the case, how about I play my hand with a visual example? 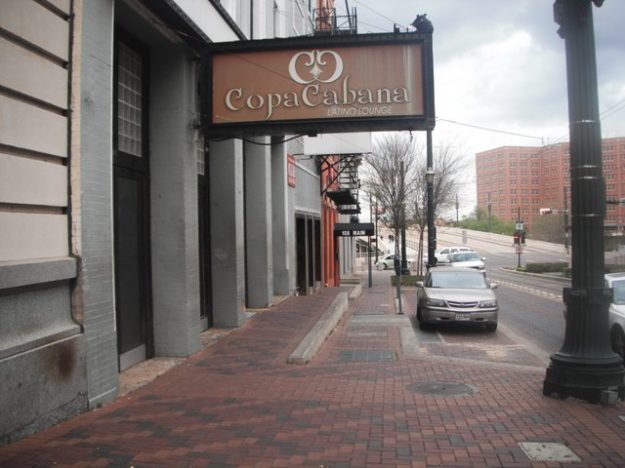 Here we witness a stretch of sidewalk on the northern side of Houston’s downtown—all bricked up and no one walking on it at the start of the late-afternoon rush hour. The lack of pedestrians downtown most likely reflects a host of other issues that Houston’s leadership continues to confront. And, to be fair, these pictures date from the spring of 2013, so this block, filled with marvelously preserved yet underutilized old commercial buildings, may enjoy rosier fortunes today. 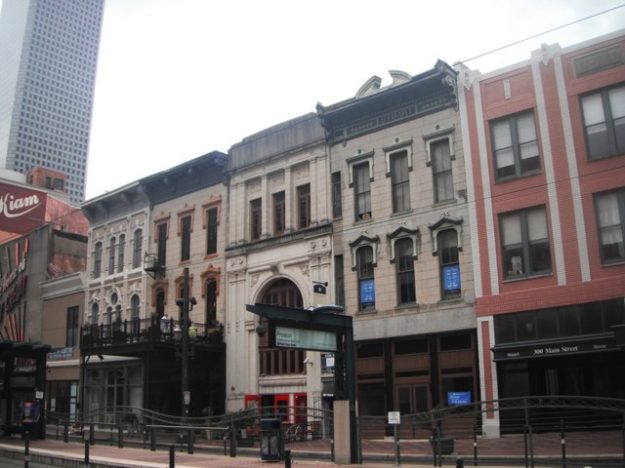 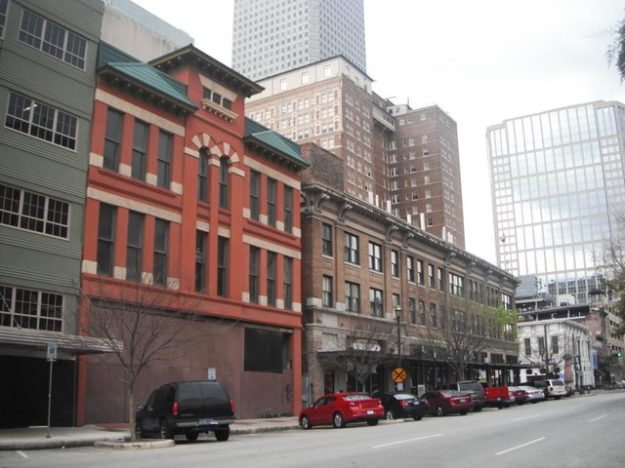 Regardless of the condition of the real estate, the streetscape merits particular attention: it is clad almost completely in brick.

Like virtually every downtown in America, Houston has attempted to soften the visual appearance of its downtown to expedite its revitalization. Sixty-five years ago, when downtowns were still the pre-eminent and often the exclusive commercial node to small or even medium-sized cities, they didn’t need to focus so greatly on aesthetics so that they could compete. (And Houston in 1950 had approximately 600,000 people—about a quarter of the city’s population today.) Downtowns’ competing forces were merely setting up shop down the street, or another sub-district within the same downtown. Obviously the emergence of shopping centers, malls, and parking lots changed all of that. And it’s changing again, as online retail and commerce takes a larger bite out of real estate with each passing year.

Particularly in the 1990s and early 2000s, before urban revitalization had morphed into a mainstream phenomenon, many cities large and small attempted to enhance the appeal of their downtowns through streetscape improvements. The practice borrowed heavily from the mostly failed pedestrian malls that cities attempted in the late 1970s (one in Baltimore caught my attention recently) In recent years, even small towns have jumped the bandwagon, devoting considerable portions of their annual budget to benches, decorative lighting, landscapes, customized street signs, and, of course, those brick sidewalks.

Now about those bricks… 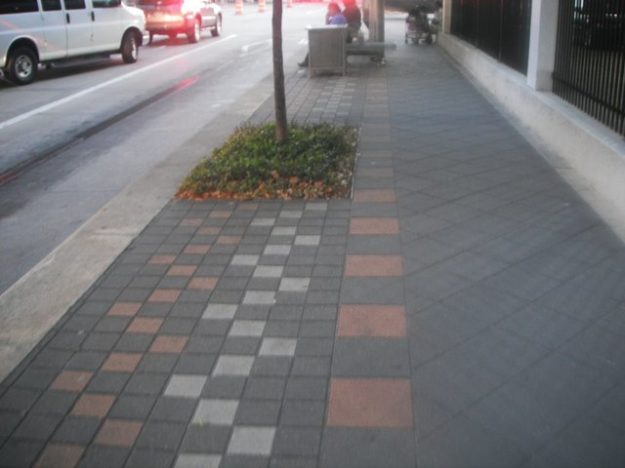 It sure seems like we love ‘em. Any district that is attempting to assume an up-market, historic, or simply distinctive cachet often first and foremost seeks some alternative to the concrete pavement. The photo above, at another portion of Houston’s downtown, opts for a elaborate pattern of square pavers for 90% of the sidewalk, while only the remaining 10% directly abutting the curb receives the conventional concrete treatment. Perhaps the unusual paver pattern helps distinguish the area as a special historic district, reflected in the street signs… 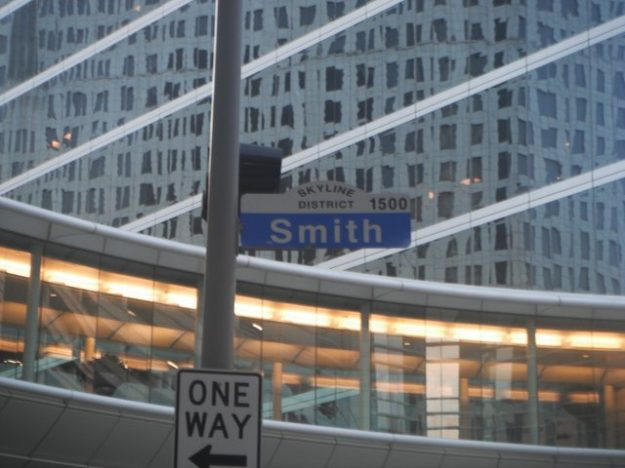 …which, in turn, the pavers reinforce. 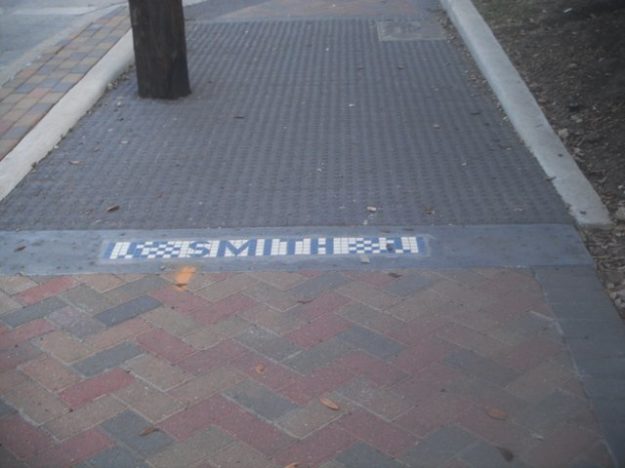 I’m less averse to the mishmash of styles than the fact that they all depend on a paving scheme hundreds of times more complicated than simple concrete. The all-brick sidewalk in the first photo is probably the most frustrating: besides the fact that this approach requires far more investment and long-term maintenance, the array of tiny pavers results—as I have noted before—in a higher density of cracks and interstices, which just means more opportunity for things to go wrong: individual bricks to get dislodged, unevenness that spawns tripping hazards, calls for further maintenance to keep it looking good. Additionally, brick is a material that decays easily from water intrusion unless the installers treat it with a glazing or sealant, but that same glazing forces water to rest as a thin film atop the bricks, making a brick sidewalk unnecessarily slippery when wet. This might be less of a problem in a dry climate; Houston is not a dry climate. Those of us who like to run in urban settings know how treacherous brick sidewalks can be.

As for the multi-colored squares as pavers, they might achieve a desirable compromise between brick and boring, conventional concrete slabs. 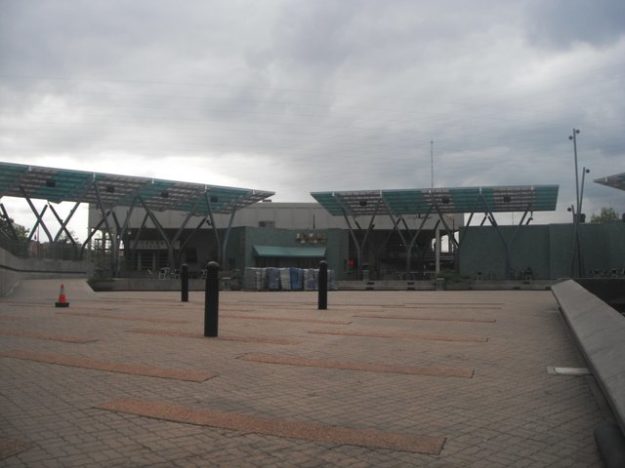 If the materials are, as they often appear, merely a cement-based aggregate with dyes in them, the strategy probably helps to fend against the slippery conditions fostered by masonry. But once again, the number of interstices inevitably results in higher maintenance needs, and a dislodged piece of colored concrete is just as likely of a pedestrian threat as an equally unstable brick. A far better compromise might be the approach I discovered in rural Oklahoma several years ago, where the sidewalk primarily used concrete with brick accents right at the edge (next to the curb), which still achieved aesthetic goals without fostering lots of new tripping hazards.

In the grand scheme of things, I’m making mountains out of molehills through all this pearl-clutching about pavers. The number of serious injuries caused by tripping is probably minimal; I’d wager that fatalities sit squarely at zero. As I’ve learned firsthand through family experience, successful litigation against negligent property owners in slip-and-fall situations is extremely rare, so odds that public works departments will revert back to conventional concrete sidewalks thanks to a few whiners are slim. But the treatment is not necessarily better than the disease, and a cost/benefit or Pareto efficiency analysis on aestheticized sidewalks is not likely to show a net gain accrued to adjacent property owners, to perceptions of downtown as a whole, or even to overall impact on the revitalization forces already in play. Drab concrete sidewalks are cheaper and safer than most decorative alternatives.  But those alternatives stand out visually, and, when so many districts are competing for consumer attention, achieving surface bling may seem worth every penny.

Then again, one could argue that brick sidewalks (and streets) are merely a return to the paving surface used before cars became ubiquitous and the more durable concrete overtook the urban landscape. And, with the re-emergence of aesthetic brickwork, that the taste culture has come around full circle…which of course leads to the rejoinder that we have yet to learn from any of our mistakes from the past. But we knew that already.

PrevPanda politics: a new diplomacy for the nation’s capital.
Unisex restrooms: a truce amidst the eternal battle.Next