In Central Falls, a strip mall is still salvation.

Even in the best of times, the opening of a new strip mall rarely if ever gets anyone’s pulses racing. This one, on the southern boundary of Central Falls, Rhode Island, a suburb of nearby Providence, is no different. 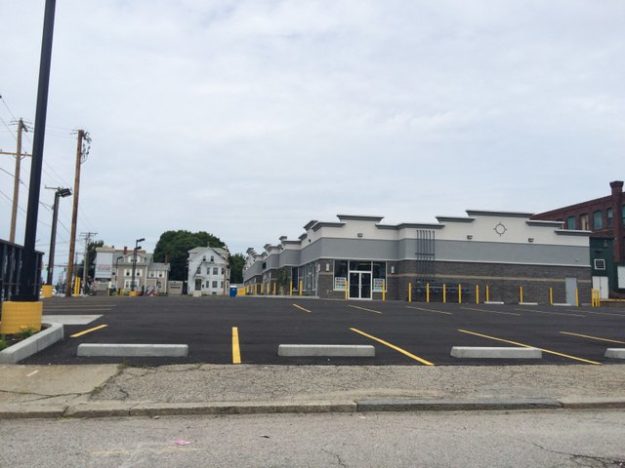 The only characteristic that distinguishes this is a certain three-letter adjective that appears in my first sentence—a word that remains the single most powerful and frequently used descriptor in the advertising world’s limited lexicon.

It’s a new strip mall, with richly dark asphalt, freshly painted parking stripes, and a façade consisting of soft grays, punctuated with “Coming Soon” signs in the windows. But that’s about it. Still just a strip mall.

I suppose, at least a half-century ago, such construction might have been a cause for excitement, when dedicated off-street parking right next to a row of shops still seemed like a novelty and an unsurpassed convenience. Back in the good old days, most people took trolleys to reach walkable downtowns or main streets, or, if they owned a car, they took the vehicle and parked right alongside the busy street. But with ubiquity comes the demise of novelty, and the strip mall eventually eclipsed the old shopping typologies. Even at its most popular, nobody championed the strip mall as a beautiful, charming place to shop. The term “strip mall”—never a very pretty sounding label—always conveyed a certain horizontality, a flatness, a dullness, a built form whose greatest selling point was its ease of access. And for at least a few decades, that was good enough.   After all, aesthetics are subjective, and a downtown in continued neglect might boast more interesting, textured edifices, but it didn’t necessarily meet most people’s aesthetic standard as much as a clean, well-maintained suburban shopping plaza. While strip malls certainly remain convenient, the lack of any distinguishing aesthetic feature may hurt them, in an era where experiential, beautiful, charming shopping trumps utilitarian errands, a preponderance of which people perform via the internet. Today, walkable, experiential main streets enjoy a resurgence fueled by nostalgia, while countless strip malls languish in vacancy.

Yet here, in this instance, in 2015, the City of Central Falls greets a brand-new strip mall, at a time when most cities are stuck confronting the excess of auto-oriented low rise shopping plazas, which equates to tens of thousands of square feet of underutilized, devalued real estate. What makes Central Falls different, and why would a developer build a retail structure at a time when both retail and strip malls—the land use and the edifice itself—have lost much of their viability? 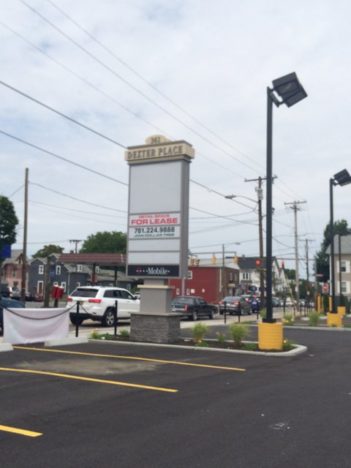 I admit that I can’t find online evidence to corroborate it 100%, but I have a sneaking suspicion that Dexter Place is the product of a public-private partnership. It’s hard to imagine any reasonably intelligent developer assuming the risk to shell out money for a failing retail form, yet alone finding a bank willing to lend. Strip malls today simply lack viability, and there’s good reason to believe that Dexter Place will struggle to absorb that many tenants.

So why build it? I have a sneaking suspicion that the economic conditions that make it unattractive for private developers are the same that generated allure for nonprofits or municipal government. The municipality itself may be critical: Central Falls is not a prosperous place. Though it’s the densest city in the second most densely populated state, it long subsisted almost exclusively as a factory town, reaping the benefits of the Industrial Revolution long before it made waves in other, more newly settled parts of the country. It had much the same population in 1900 as it did today. But as industry failed in the mid-century, and the housing stock increasingly catered to an almost exclusively working-class population, Central Falls remained dense and tightly knit but grew increasingly undesirable for households with wherewithal. Today, it’s the poorest city in Rhode Island, and it drew national notoriety in 2011 when, after going into receivership, it filed for Chapter 9 bankruptcy protection–a relatively rare occurrence.

Though down about 20% from its 1930 population peak, Central Falls remains dense: nearly 20,000 people packed into its modest 1.2 square miles. But with a nearly 30% poverty rate and an uncharacteristically high foreign-born population, the city derives most its purchasing power through the sheer number of people rather than their collective assets. And a new strip mall represents less of an attempt for a real estate speculator to make an easy buck and more of a desperate effort to infuse the community with functional commercial properties—an act of charity.

In the summer of 2015, when I took these photos, Dexter Place was brand new and the tenants had not yet moved in. It had ostensibly secured two: T-Mobile and Dollar Tree. 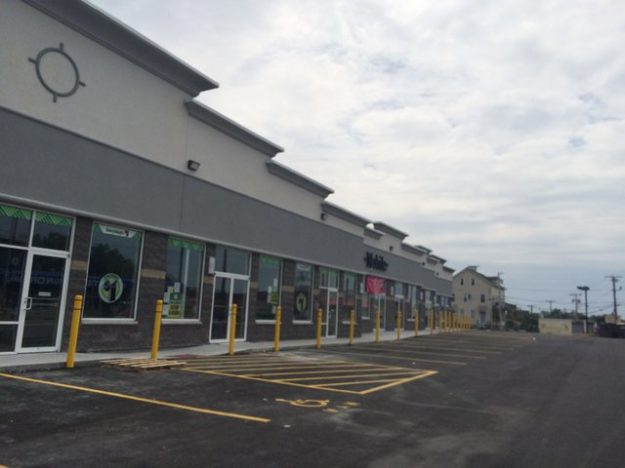 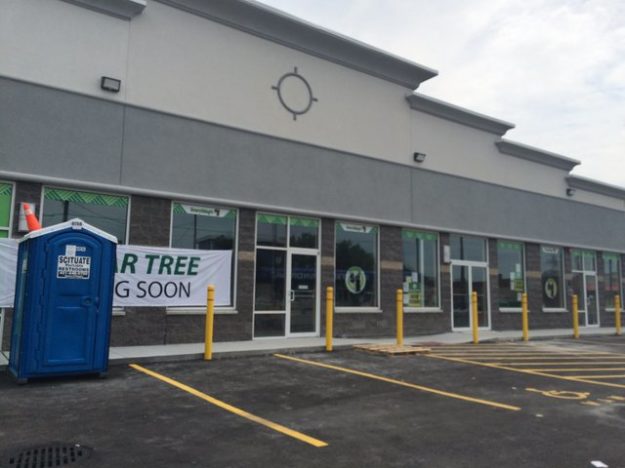 Two and half years later, Google Maps suggests that it retains those same two tenants, making it (a very rough estimate) about 60% occupied. Not terrible by any means, but no private development pro forma employs a rate that low. As is characteristic of anything in Central Falls, it doesn’t suffer from a dearth of rooftops nearby. 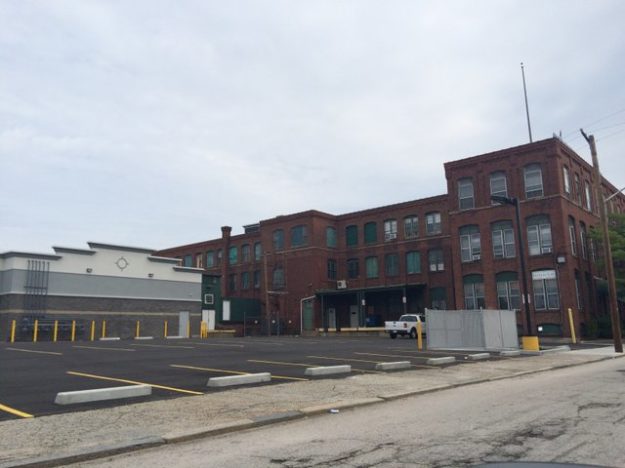 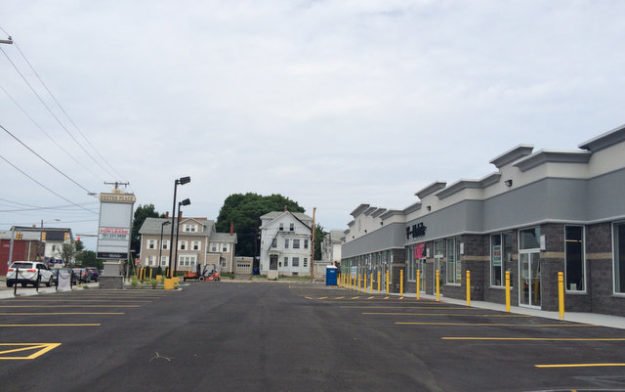 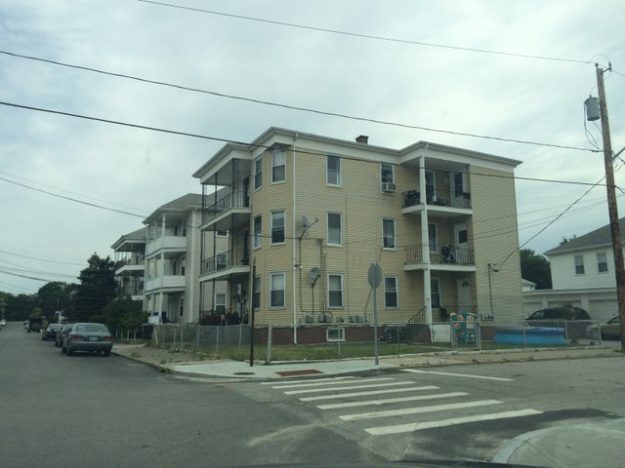 It’s a dense city, with tons of New England triple-deckers. And it really doesn’t look that bad—certainly not as devastated as the poverty would suggest. 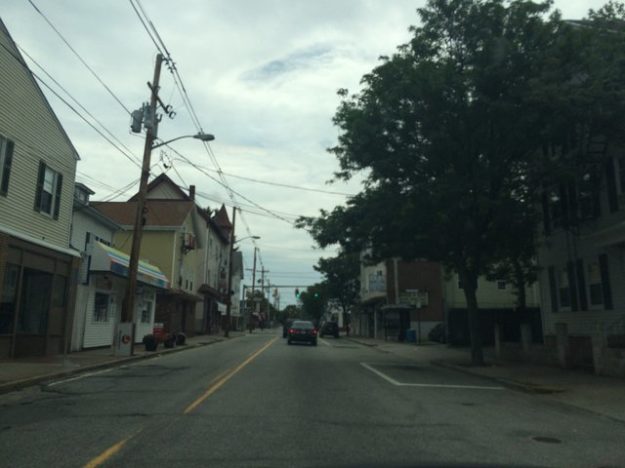 It’s also uncharacteristically light on commercial buildings, with no true main street—a bit of a surprise given the density. The vexing poverty rate doesn’t help, but strip malls in a poor area can usually still attract tenants that cater to a moderate-income community…unless, of course, they’re new and charge prohibitively high leases.

Dexter Place most likely wrestles with the aforementioned phenomenon. Concurrent with the waning interest in shopping is the demise of historically ironclad retailers, even traditionally low-budget vendors like Payless Shoes. Also, the strip mall typology—still reasonably successful in some suburban areas—might actually prove passé in a city a dense as Central Falls. Here we witness a big parking lot in one of the few places in the country where the community does not depend on automobiles. Poverty and density combine to promote low car ownership, so the large parking lot may prove completely unnecessary.

In short, as a real estate investment, Dexter Place rests precariously upon a pedestal of paradoxes, a socioeconomic Tinker toy contraption. Not the sort of thing to inspire confidence in the private sector. Which is why I again assert that this development most likely involved little to no private dollars. Take a look at what it was in 2011: a ramshackle, discount hardware store.  Now the strip mall seems like a real improvement.

The various efforts to lift the city out of a junk bond rating—in the wake of its previous mayor’s imprisonment under federal corruption charges—suggests a Keynesian solution: infuse cash into targeted locations of the city in an attempt to stimulate further revitalization. The grant disbursements or state economic development allocations that most likely spawned Dexter Place are a modest but visible means of rescuing a city in desire straits, if not in the ledger books then at least in the eyes of the public. And while a wiser long-term investment at this site would have involved a multi-family apartment building flush with the sidewalk—potentially with a little (but not too much) retail on the first floor—clearly that would have required a whole different array of approvals, tax credits, zoning variances, and even some possible environmental remediation.

A new strip mall in this day and age is rarely a strong indicator of a sound investment. But, given the context, it may prove the only crutch that Central Falls can afford. Hopefully, in due time, Dexter Place secures another tenant. But if I were a betting man, I’d wager that next lease will go to another dollar store, which will siphon customers away from the Dollar Tree; then one of the two businesses will fail a year, leaving more flatness, dullness, and auto-oriented convenience to people who don’t own cars. Curse you strip malls.

PrevUnisex restrooms: a truce amidst the eternal battle.
The ramp without a purpose: handicapped design swings and misses.Next

5 thoughts on “In Central Falls, a strip mall is still salvation.”