As pedestrianism intensifies and its strongest advocates promulgate the newest and best practices, we predictably witness compelling or examples well beyond the big-city antecedents. Not surprisingly, we witness the same incremental improvements in accessibility for persons with disabilities, often in tandem with pedestrian upgrades. This should come as no surprise: after all, sidewalks should serve as the domain for anyone who uses the same transportation mode both indoors and out, which includes sneakers, crutches, wheelchairs, walkers, and a few contraptions whose names escape me. Among my favorite of these improvements—more for its chutzpah than its effectiveness—was a sidewalk up a steep slope in Jackson, Mississippi, which zigged and zagged its way across that grassy hill so that the slope never exceeded a severity that would render it unusable for hand-operated wheelchairs, per the stipulations of the Americans with Disabilities Act. Boy, did that sidewalk zigzag—Jackson’s Crookedest Sidewalk.

In cities that have long claimed a legacy of walkability, the pedestrian upgrades generally demonstrate a slightly better stewardship and long-term vision. Places like Baltimore, for example, originated and flourished at a time that long preceded the automobile. They boast a built form that accommodated the pedestrian a priori. But sometimes, even cities like Baltimore offer public works improvements that leave us scratching our heads, like this one near Morgan State University campus. 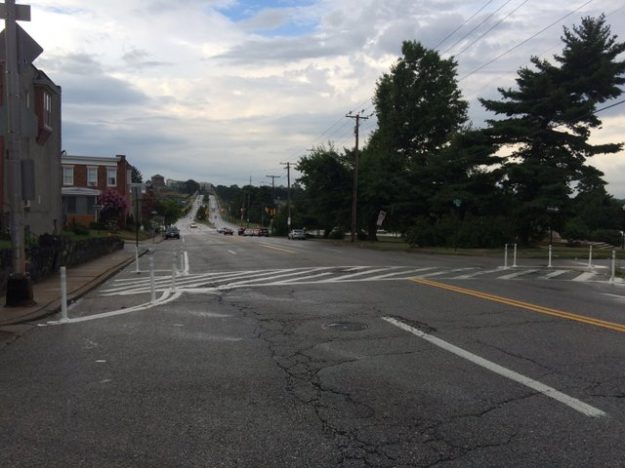 It’s a crosswalk protected by painted stripes and white, protruding reflective sticks (they’re too flimsy to call bollards, though I guess that’s what they’re meant to be). Normally this type of installation would help narrow the crossing distance at an intersection, giving pedestrians an added refuge and forcing cars to slow down when turning a corner. To some extent, this Baltimore incarnation resembles a project I chronicled in Hoboken here on this blog (and at Huffington Post) a couple years ago. We’d call it a “bulb-out” because of the way it induces the road to taper at an intersection, favoring walkers over vehicles. 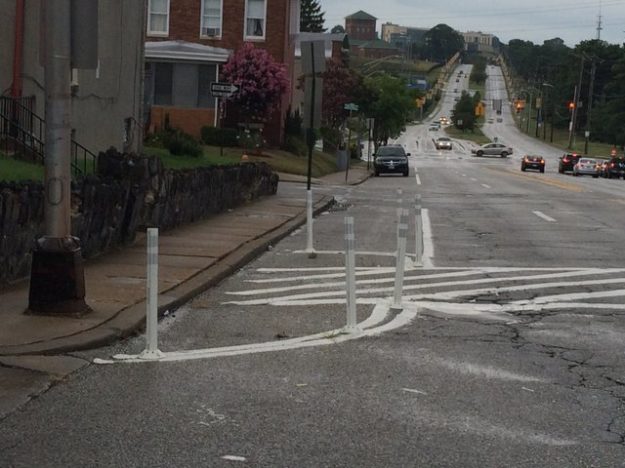 But this example in Baltimore doesn’t exactly traverse a conventional intersection. On one side of the street, it aligns with a corner. 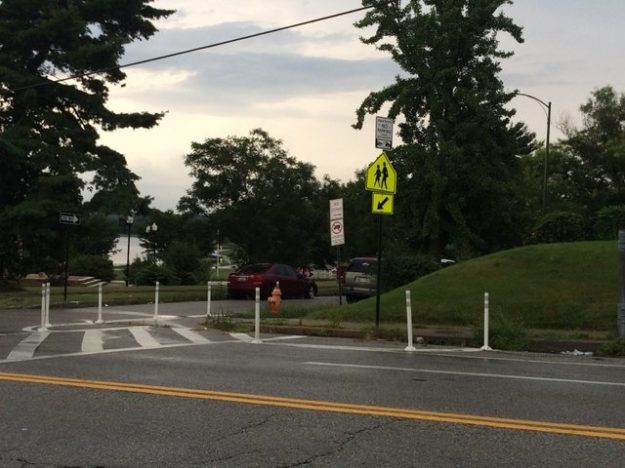 But on the other side, it lands smack in the middle of a block. 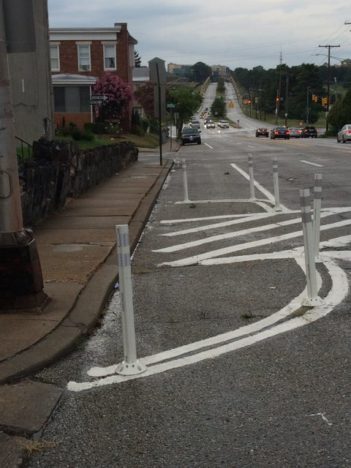 To top it all off, the corner just to the left of the above photo isn’t even a residential street; it’s an alley without a sidewalk, visible in the linked Street View image.

Essentially, this crosswalk attempts to connect a local street with an alley, neither of which intersect the busier collector at perfect alignment, resulting in a design that “jogs”. The misalignment creates two T-shapes in close proximity instead of a more harmonious “plus” shape, which would allow cars passing through the intersection to simply drive across rather than veer slightly to the right or left. Here’s what it looks like from a Google-furnished aerial: 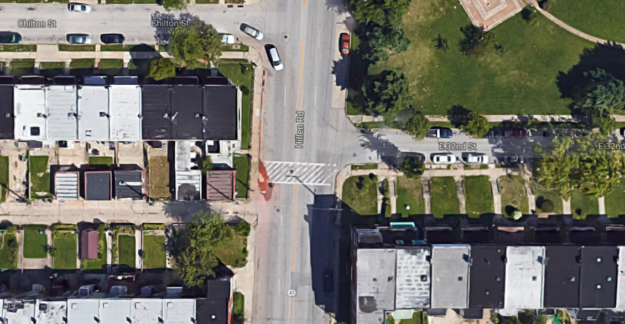 Most contemporary transportation manuals strongly discourage this road design; many municipalities would not approve a new subdivision that deploys it. By today’s standards, intersections must either be a perfect four-way or two consecutive three-ways must have a minimum separation distance. But it was common practice a century ago, and few public works departments have the capacity to retrofit the intersections to a better design.

So why build a crosswalk in a spot that’s already awkward for motorists, thereby escalating the chance of a hazard for pedestrians? Then, to top it off, why install bollards to upgrade it? I suppose there’s the slight possibility that the presence of caution stripes helps mitigate an accident where it might previously have occurred all too often, but it also encourages pedestrians to cross at a location that, by design, is less than ideal. And the striping at the corner actually made the turn radius more generous, favoring drivers to make high-speed turns that particularly endanger pedestrians. It would have been just as easy to construct this upgraded crosswalk at a conventional four-way intersection a block or two away. Instead, the public works team chose to upgrade an already poorly conceived design. The only other positive outcome that these upgrades might have achieved is that they will at least keep vehicles from parking on the street in a way the blocks the crosswalk itself. But a more logical location near a full-fledged intersection would have deterred motorists from parking there anyway; now, at this location, it just nullifies an otherwise good parking space.

But that’s not the least of it. Despite all the extra bollards and striping, the crosswalk retains one other monumental deficiency. 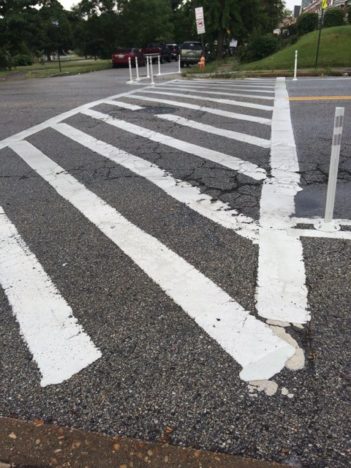 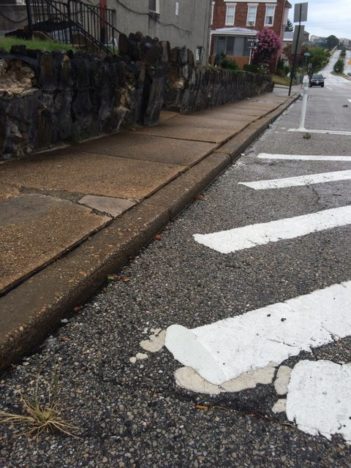 At both ends, it lacks a curb cut, making it completely unusable for wheelchairs and therefore non-compliant with the ADA. Fortunately, despite this minor blot, Baltimore remains an overwhelmingly walkable city. No place gets the upgrades right all the time, and as long no pedestrians suffer injury (few people I suspect even use this crosswalk), the intermittent goof in a rich and variegated urban texture can be—what would Baltimoreans call it?—a source of charm.

PrevHow parochial can public education get?
Petworth: where the development climate is anything but Frosty.Next