When steeples compete with summits.

The river-to-rail city of Cumberland, nestled between the prodigious hills that dominate western Maryland, may not be thriving, but it sure offers some charming, timeless vistas. 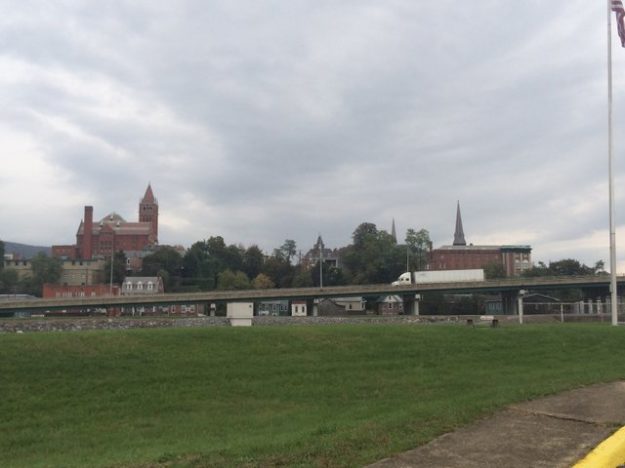 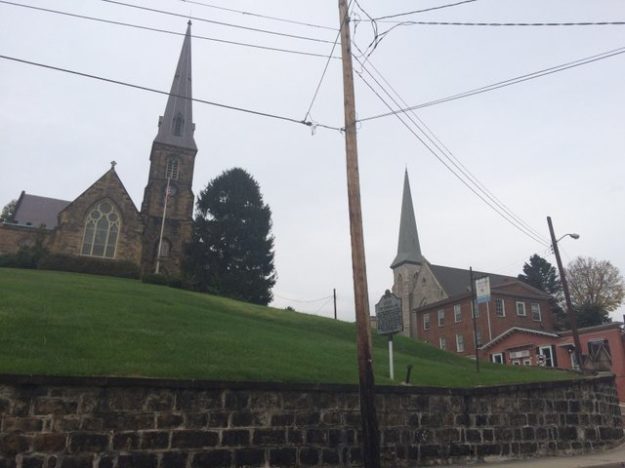 As is too often the case, this photo only partially captures its objective: the Cumberland skyline—a city of churches.

It isn’t a big city at all, so the geographic range of great panorama shots is limited. The best views come directly from the elevated cartway of westbound Interstate 68, but the traffic flows don’t allow for a safe or easy means to capture the density of church spires. The only option is to situate one’s self on the south side of the interstate (also on the West Virginia side of the Potomac River) to capture as much as possible. 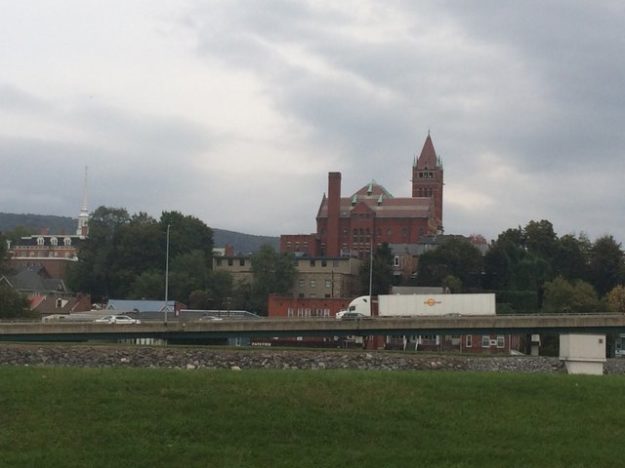 The foreground is Ridgeley, West Virginia; the background is Cumberland, Maryland. In between is a segment of the Potomac far less mighty than we see around the National Mall. And even at this angle, it’s tricky to get all those steeples. For a city of 20,000, Cumberland sure owns quite a few.

Maybe all those steeples are a consequence of the religiosity of the town’s citizens. Maybe it’s the fact that the built environment is much larger than the above population figure would suggest: the city rose steadily in the turn of the 20th century, peaking in 1940 at nearly twice its current size. Cumberland has a downtown that, although far emptier than I’m sure its residents would like to see, remains dense with old commercial buildings.

But I don’t think any of these explain that skyline as much as its convenient geography. Cumberland boasts more church steeples because, compared to cities to the west and south, far fewer have burned to a crisp. According to the proverb, lightning never strikes the same place twice, but that probably depends on what our definition of “place” is. A city like New Orleans, in which brief, violent thunderstorms broadly characterize a typical afternoon between May and October, receives more than its fair share of electrostatic discharges—so many, in fact, that churches throughout the region characteristically lack the spires to their steeples. All that’s left is the tower and maybe a belfry. More often than not, those wooden spires burned to the ground decades ago in a thunderstorm, but the easily manageable fire rarely spreads to the brick or stone church itself. Constant replacement of an architectural feature so prone to lightning strikes is hardly a sound investment, so, in time, the churches relented, leaving a nub—a half-hearted attempt at a tower—where a steeple once pierced the heavens.

Apparently Cumberland doesn’t suffer this problem. While I suspect the rugged Appalachian topography influences weather patterns—the region is considerably less prone to tornadoes, for example, than the flatter glacial planes of the Midwest or Deep South—its position within the North American land mass probably exerts a stronger impact. As this map shows (from Modern Survival Blog), New Orleans sits along the Gulf Coast, a region with some of the highest flash density in the country, according to the Vaisala Lightning Detection Network . Conversely, the Allegheny Mountain range within the larger Appalachian Plateau—particularly the area comprising the border between Virginia, West Virginia and Maryland—has an unusually low flash density, particularly compared to coastal Virginia and western Kentucky in either direction. 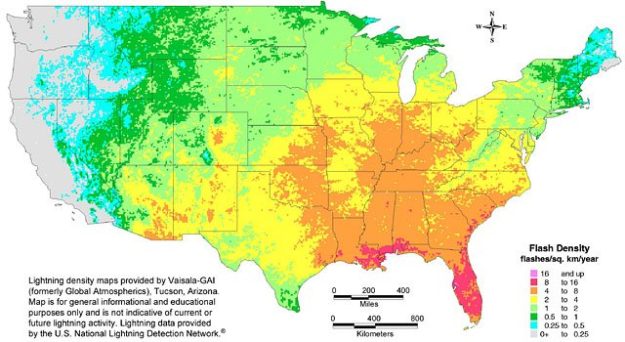 Thus, Cumberland is less a city of churches than a city of steeples. And, unless the churches themselves face the wrecking ball, it’s likely to remain that way. Though once the “Queen City of Maryland” and the state’s second largest city behind Baltimore, it no longer can claim a particularly high profile, with its name most likely evoking its history as a transit hub—a gateway to the west, not only through the Cumberland Road (predecessor to the National Road, now called U.S. 40), but also the Chesapeake and Ohio Canal’s western edge, as well as an important stop on both the Baltimore and Ohio and the Western Maryland railroads.

In the age of the automobile, the city has faded to a somewhat obscure status, no doubt amplified by its position in the outer reaches of the state, far removed from the affluent urban center between Washington DC and Baltimore. The one transportation corridor fueling the city’s image today is the serpentine Interstate 68, a relatively recent addition to the federal Interstate Highway System. Completed in 1991, I-68 serves no major metros. Cumberland may in fact remain the largest city, and, since the highway cuts clear through the southern edge of downtown, it creates an intriguing visual reprieve to the sparsely inhabited mountains on either side. Most motorists will make it through the entirety of Cumberland in less than four minutes along I-68. But it’s likely to leave a strong impression, not only because it’s the only urban game in town, but like most parts of the country where the majority of construction took place before 1950, it claims a lot of tightly-packed old churches, with nary a parking lot in sight. And, unlike most other cities in the eastern US, nearly all those churches still support a mighty steeple—likely the original construction in some instances. Even if this formerly mighty small city never boasts a true skyscraper, at least it can still claim a handful of human-crafted structures that reach toward the firmament—a human-crafted counterpart to the time-hewn, equally lofty hills and mountains nearby.

PrevSears at Landmark Mall: all dressed up and nowhere to go.
Old Town Mall MONTAGE: life after people, a mile from Baltimore’s downtown.Next

6 thoughts on “When steeples compete with summits.”