A watering hole on the Detroit city line…with a special knock and password to enter?

While I continue to grind through a longer, more involved article, I’ve found some respectable filler material, now from a place I haven’t visited in quite some time: the modest burg of Detroit. By this point, the average person in the United States has at least a passing awareness of the mammoth economic gulf between the city and its surrounding suburbs; perhaps the most famous demonstration was the hit movie 8 Mile, where the eponymous street embodied the city’s northern political boundary, essentially barricading the impecunious characters within the post-industrial hellscape of the Motor City.

While the divide at 8 Mile Road is stark, it’s not nearly as bad as it could be. First of all, 8 Mile itself is practically a superhighway, measuring six lanes across, with express lanes and a generous median during many segments. Additionally, the neighborhoods immediately south of 8 Mile rarely are among Detroit’s most impoverished. The chasm is wide, but not as wide as it could be….and nowhere near as great as at Alter Road, along the city’s eastern boundary. Here’s a street scene of Alter Road, courtesy of Google Street View.

I’ve written about this humble yet potent demarcation once before. Not only is Alter Road a conventional two-lane collector (with enough space on the shoulders for on-street parking), but it splices the Lower East Side of Detroit—areas that have suffered an over 90% population loss—with the adjacent Grosse Pointe suburbs, a cluster of small, contiguous municipalities that all feature the name “Grosse Pointe” followed by a third word (Park, Farms, etc), which, as a group, house some of the region’s most elite. The “Grosse Pointes” are walkable, verdant, tidy, and immediately adjacent to the Great Point where the Detroit River spills into the much larger Lake St. Clair. They’ve got all the qualities associated with the upper echelon of suburbia, despite the fact that the adjacent central city continues to flounder. Essentially, they’re Detroit’s equivalent to the North Shore of Chicago. All that separates the comfy brick doubles and detached homes of Grosse Pointe Park from the desolation of Detroit is this modest little street—or, to be more precise—the lot lines of the properties that front it. The Google Map below demonstrates the boundary, with the rose transparency over the portion in the Detroit city limits. 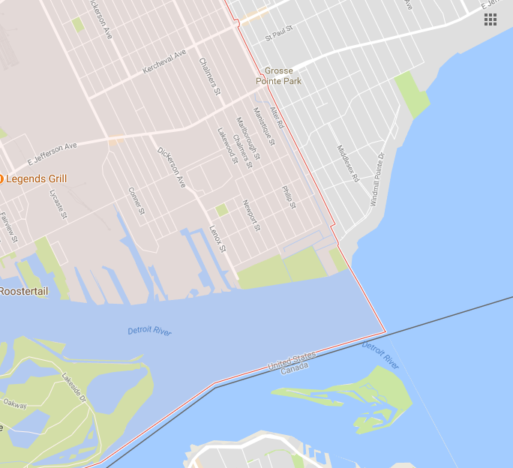 An individual can literally walk from a census tract with less than 10% poverty rate (probably less than 5%) to one of over 40% in just two minutes.

The sundry means in which the citizens of Grosse Pointe Park have kept the socioeconomic malaise of Detroit at bay (both politically and physically) is worthy of a blog article in and of itself. I’ve chosen to write about one of its most modest incarnations—because, to me, the mundane all too often speaks more powerfully about the underlying collective ambitions of a population…much more than bold, jarring, cataclysmic big gestures. I discovered a perfect example of this at Alter Road’s intersection with Charlevoix Street.

The pic above is on Charlevoix, standing near the corner of Alter Road at the intersection looking eastward into Grosse Pointe Park. A tiny old commercial node offers some pedestrian-scaled eateries and shopping. Here’s the same intersection facing westward, looking into Detroit. 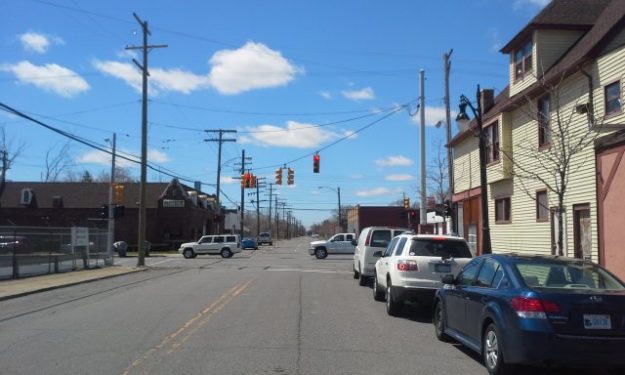 Most of the buildings are haggard at best; numerous lots are vacant. The Google Map effectively limns the difference. 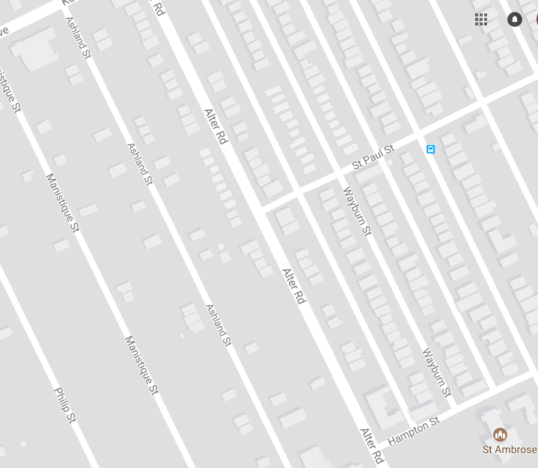 While the Grosse Pointe Park features building footprints in orderly lines next to one another, the numerous gaps on the Detroit side represent decades of abandonment. If these photos don’t offer enough evidence, take these examples. The first is on Wayburn Street, the next road parallel to Alter on the Grosse Pointe Park side: 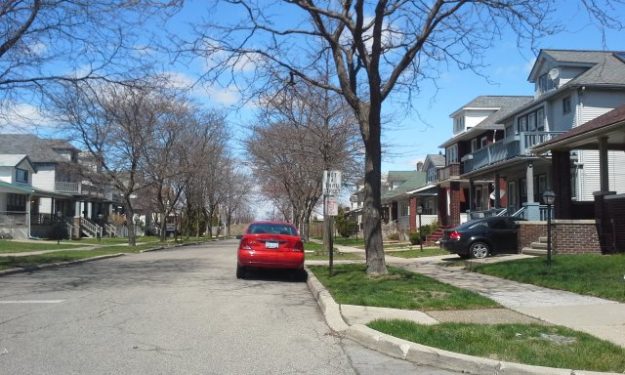 The second scene, most visible through Google Street View, is on Ashland Street, the same point but two blocks to the west, fully in the Detroit side.

Throughout the length of Alter Road, the distinctions are just this stark. The homes facing Alter tend to languish in various degrees of long-term neglect. 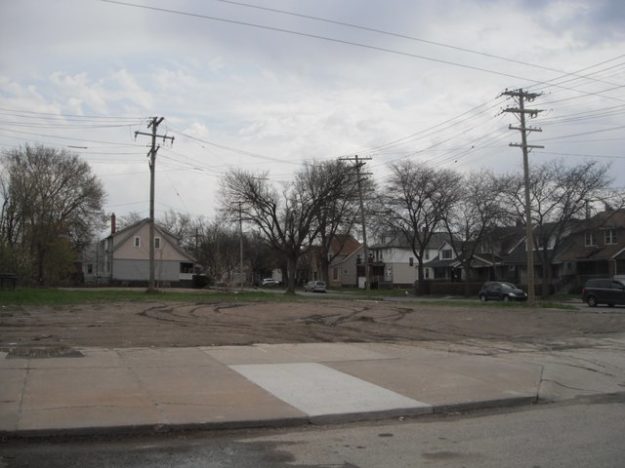 But on this corner at Charlevoix, site of Ye Olde Tap Room, we witness a relic from the era when the east side of Detroit flourished with tidy lower-middle class homes, lined up like troops standing in formation, all fronting Detroit’s uncharacteristically long blocks. 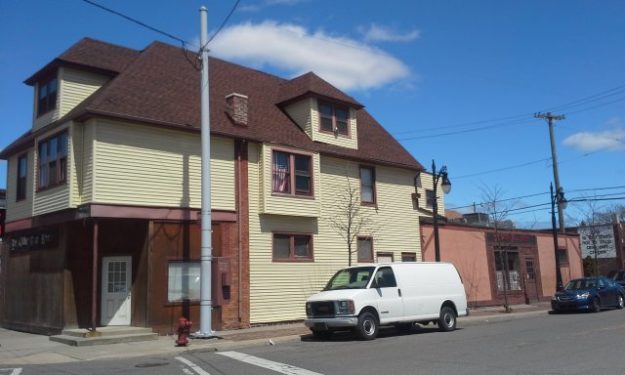 There it is, in a semi-converted, century-old yellow house, with owners living on the two upper floors. Most evidence suggests that Ye Olde Tap Room is your standard-order townie bar. I’m not completely convinced it’s the real deal—that it genuinely dates from a time when it would have served as a watering hole for Chrysler employees after a day on the assembly lines. But the fact that it lacks a website bodes well. Regardless of its age, Ye Olde Tap Room fronts Alter Road, with its back to the municipal boundary line. The street would be visible to the immediate left of the edge of the pic.

But all is not as it seems! Zooming in on that white door is a subtle sign. 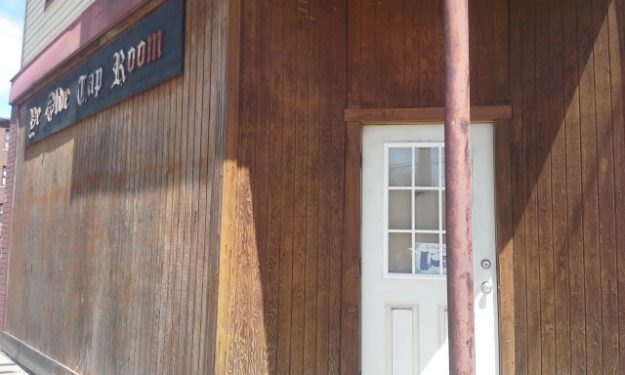 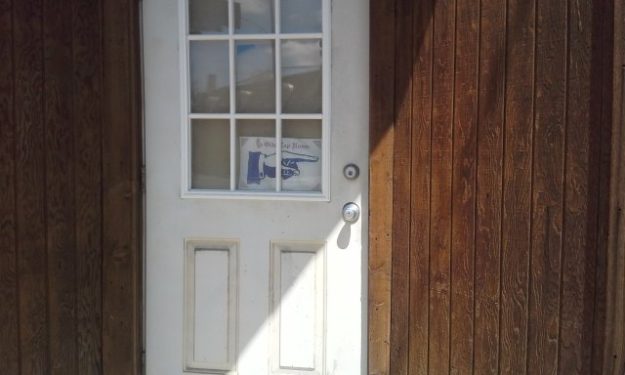 It points the visitors to another, preferred entrance. Here’s where it’s sending us. 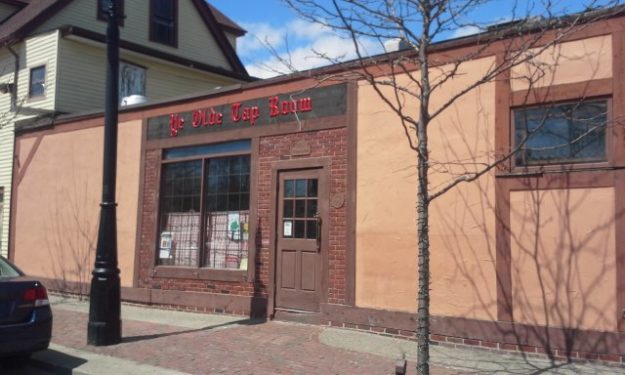 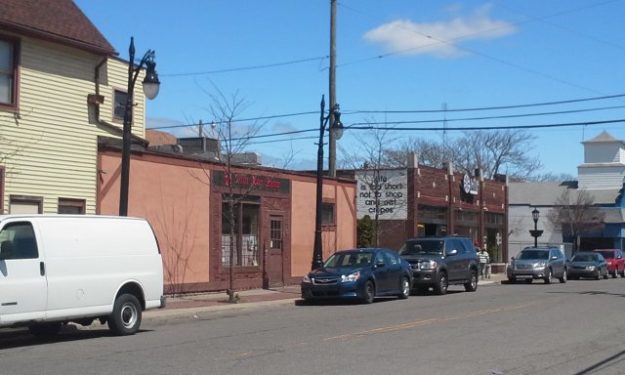 Essentially the proprietors have pushed the actual entrance into an attached low-slung building on Charlevoix—as close as they possibly can to the Grosse Pointe Park boundary. It could be pure coincidence. But the fact remains that Alter Road is the busier street, with the more prominent entrance. Yet Ye Olde Tap Room has chosen to steer its clientele to Charlevoix…the safer side.

It’s a subtle indicator, and I could easily be reading too much into things. But Alter Road is not a superhighway like Eight Mile. And, for many residents on the favored side of Alter, its humble width might not prove enough separation. As is often the case when to municipalities with vastly different socioeconomic profiles abut one another, the powers that be in the more affluent town do everything they can to alter their environment (get it?) to keep the poorer people out. Here’s a street on the Grosse Pointe Park side less than a mile away—one that would have intersected with Alter Road in the background… 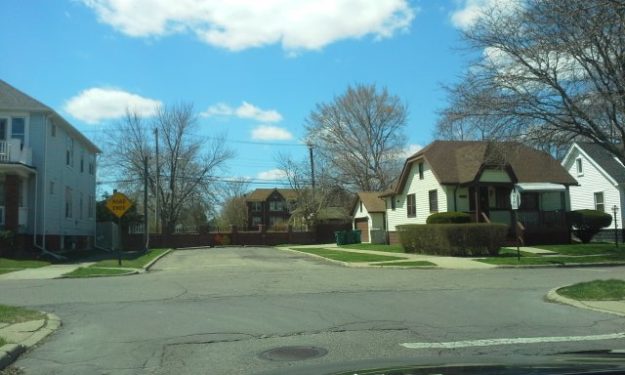 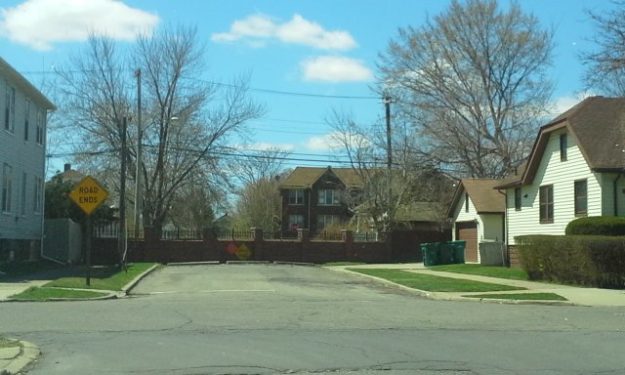 Plenty of other Detroit-based bloggers have contemplated the Alter Road divide, both the efforts to impede access as well as other attempt to bring them back together. I’ll defer to the locals. And to hear both sides of the argument simultaneously, I can’t think of a better bet than to step in and speak to the regulars at Ye Olde Tap Room.

PrevMurals for Mayberry. Or Peapack-Gladstone.
Now that we’ve commercialized the facelift, it’s time to domesticate it.Next

6 thoughts on “A watering hole on the Detroit city line…with a special knock and password to enter?”