How parochial can public education get?

Though it sits on a prominent corner in the Columbia Heights neighborhood of Washington DC, this repurposed old school building doesn’t hold a candle in opulence to some of the neighboring churches on 16th Street: 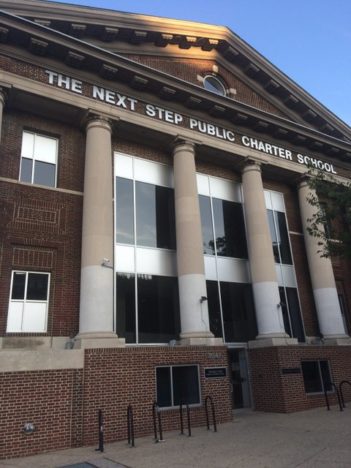 It’s unlikely that many would consider it an ugly building, though I suspect historic preservationists would pull their hair out over those inauthentic window treatments. But windows are hardly the main point of interest here. Let’s hone in on the street level: 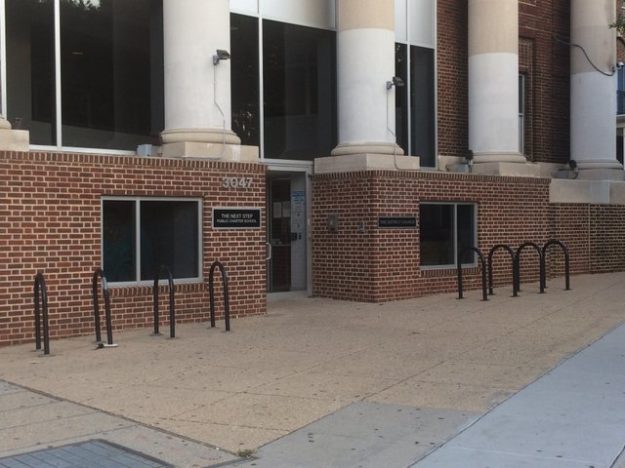 Another reference to the primary tenant here, the Next Step Charter School, visible on the sign to the left of the entrance. But what about that other sign? 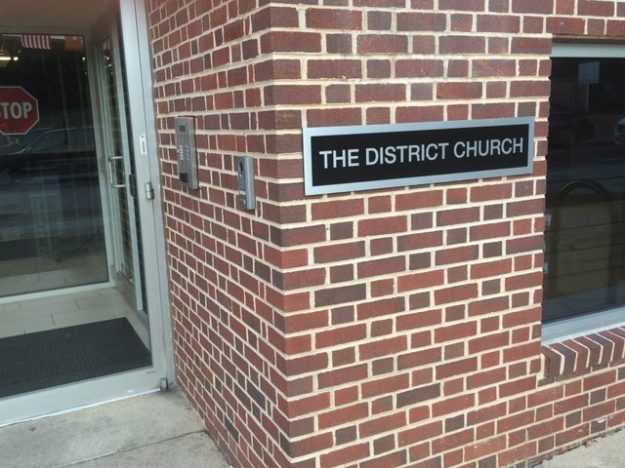 The District Church. That’s right: a church in a school—a public school. No wonder it gave me turn.

As is often the case, a bit further research helps clarify the reality behind this unusual hybrid. Next Step is apparently the District’s oldest continuously operating charter school, which, in keeping with a charter’s intention of adapting an unconventional operational structure, targets adult basic education, usually for foreign-born students, endowing them the skills to meet the equivalency standards for U.S. high school diplomas. The students at Next Step are typically from Latin America, range in age from 16 to 24, and often arrive at the school with less than a sixth grade education from their native countries. The school’s longevity, operating since the District of Columbia first permitted charter schools in 1996, is a testament to its success, especially since charters fall under considerable scrutiny for their relatively high rate of closure—even with the public funding they receive. (As a side note, its age may also explain the non-conforming window installations—something that received little attention from preservationists in the 1990s.)

But the very infusion of public funding made me wonder how this particular entity operated. 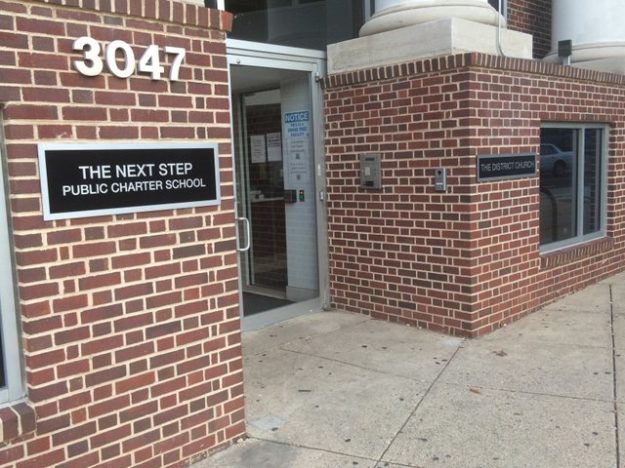 The placard for The District Church uses the font and aesthetics as the Next Step Charter School. Is the church nestled within the school, both physically and in terms of curriculum? Does the publicly funded school feature worship services? If so, how does that not violate the Establishment Clause of the First Amendment? Do charters really allow that level of flexibility, and doesn’t that force them to wade into some of the same murky waters as education vouchers, in which student receive public dollars to escape underperforming public schools—often so that they can use the voucher money to enroll in an expensive but higher performing private religious school?

Apparently it’s nothing of the sort. Sure, The District Church occupies space within the same structure, but only as a tenant—a sublease arrangement. Next Step Chart School, which in itself is most likely renting the building (charter schools rarely own their real estate), simply found a way to generate a little extra operating income. And yes, it’s operational, since Next Step is, as is typical of most charter schools, a nonprofit entity. So the presence of The District Church, a church with administrative offices at another office, which gathers at the “Columbia Heights Parish” for Sunday worship service. Judging from the photo on the website, they use the school building’s auditorium.

It’s a hand-in-glove fit for Next Step Charter. The school gets a low-key tenant that rarely interferes with school operations, since even the parking lot will be empty when the congregation needs it, and the church gets a suitably designed space for worship. Churches have proven themselves among the most adaptable institutions in the postmodern struggles of commercial real estate. Starting with the widely known “storefront church” in struggling strip malls or dead malls, I’ve spotted churches in old commercial main streets, urban playhouse buildings, or a community center for seniors. They can operate almost anywhere that has rows of chairs facing an elevated platform. And they don’t even need that. Why not movable chairs placed in a circle for group study? And, if you incorporate some Eastern Orthodox practices, do we even need a place to sit?

From a financial perspective, churches aren’t the most salubrious tenants. They don’t contribute to a municipal tax base, and, particularly in formerly thriving retail corridors, the presence of a church is usually a fair indicator that the leasing rates have plunged. Many small churches are happy to find whatever space they can, so buildings with churches rarely command high rents. But they still fill a vacancy, and, for an entity like Next Step Charter School, they offer a subleasing opportunity for an auditorium space that otherwise gets little to no use. It’s possible that someone may have questioned the legality of a publicly funded school and a church operating under the same roof. But to interfere with The District Church’s right to start a leasing agreement could just as easily violate the First Amendment once again: this time through the Free Exercise Clause.

PrevApplebee’s in the age of UberEATS: you will get off your couch.
Pedestrian upgrades: best intentions aren’t always enough to make the grade.Next

2 thoughts on “How parochial can public education get?”