Delaware Water Gap: a landmark border crossing or simply a pretty place to pay a toll?

Within the lower 48, one the humblest of great border crossings is the Delaware Water Gap, separating Pennsylvania and New Jersey. 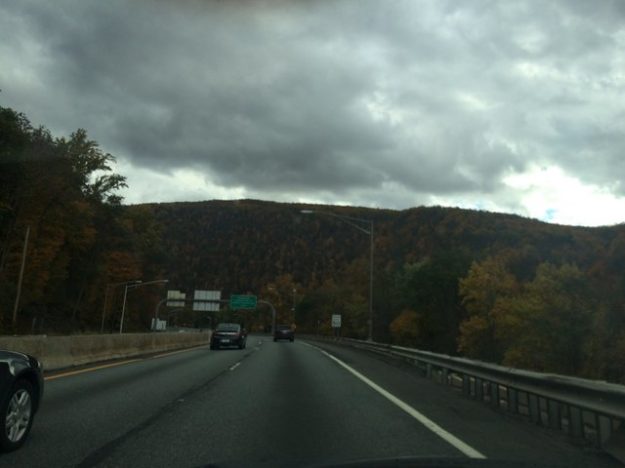 My use of an oxymoron—“humblest” coupled with “great”—is deliberate. Because in most respects (certainly from a flatlander like me) it’s a geographic marvel, yet, outside of the surrounding region, little evidence suggests that it’s a broadly known point of interest. Motorists encounter signs for Delaware Water Gap at various locations along Interstate 80 in northern New Jersey, but such signage comprises the Gap’s primary function: a point of reference for travelers reaching the border between two states.

The literal Water Gap is the southernmost portion of a 70,000-acre recreational area that sprawls across both sides of the Delaware River, part of the National Park Service’s administrative domain. It offers copious opportunities for hiking, canoeing, cycling, hunting, camping, rock climbing and cross-country skiing. On a comfortable autumn day, the natural site features hundreds of acres of old-growth forest in full color. 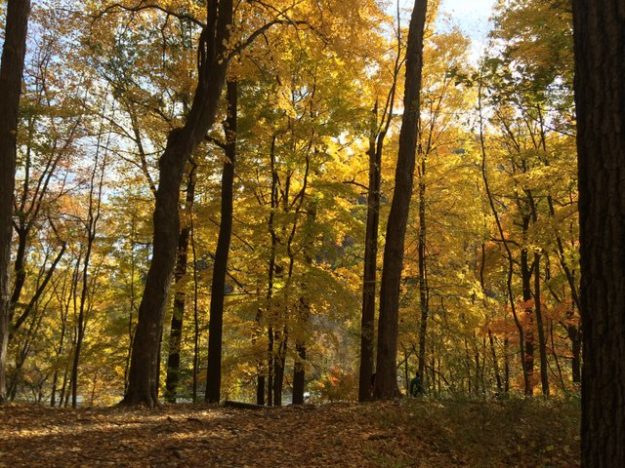 It’s only 75 miles from Wall Street, Manhattan. And while I’m certain a significant number of the four-million-odd residents who can reach the Water Gap within an hour’s drive truly cherish this natural resource, it hardly enjoys the profile of the Catskills, the Poconos, the Berkshires, the Tappan Zee, or any of the other prominent topography within metro New York.

Why does the Delaware Water Gap suffer such lukewarm PR? It could be that the Delaware River splits the protected lands across two states, both of which have plenty of other parklands that both fall under single state administration (as opposed to the Department of Interior). This split begs a question: why should a state devote touristic marketing to a Recreational Area that will easily send visitors to the portion in the neighboring state, therefore resulting in diluted return on the investment?   Additionally, the site is only unique in terms of the intensity of the topographic variation at this specific location, where the Delaware River bisects a mammoth mountain range: Blue Mountain on the PA side; Kittatinny Ridge on the NJ side. After all, passing between New Jersey and Pennsylvania always involves crossing a river; the Delaware River comprises 100% of the border between the two states. The fact that it serves as a state boundary is no big deal.

But my top vote for why the Delaware Water Gap is remarkably nondescript involves another embedded paradox. Interstate 80, the transportation arterial that renders it accessible, also makes it uncharacteristically mundane. Here’s a view after disembarking from the highway at a scenic overlook point on the New Jersey side. 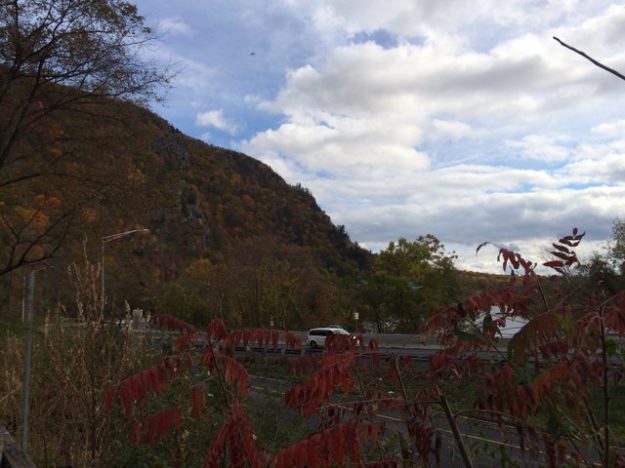 One of the original routes proposed through Eisenhower’s National System of Interstate and Defense Highways, the Delaware Gap has greeted tens of thousands of motorists daily since the late 1950s. Like most bridge crossings between New Jersey and Pennsylvania, motorists crossing this segment of I-80 must pay a westbound toll. But the highway literally wends through the National Recreation Area, using the gap as the path of least topographic resistance by which to forge a crossing between the two state lands.

Buried deep within the Delaware Water Gap National Recreation Area are all the aforementioned outdoorsy activities and more, but for those who merely want to sample the goods, all they need to do is diverge from the path at the scenic overlook, a mere 500 feet from the thoroughfare. Motorists just passing along I-80 get the best of what the Delaware Water Gap has to offer. And therein lies the problem, manifested perfectly by the two parking lots on a perfect autumn day with foliage at its peak. 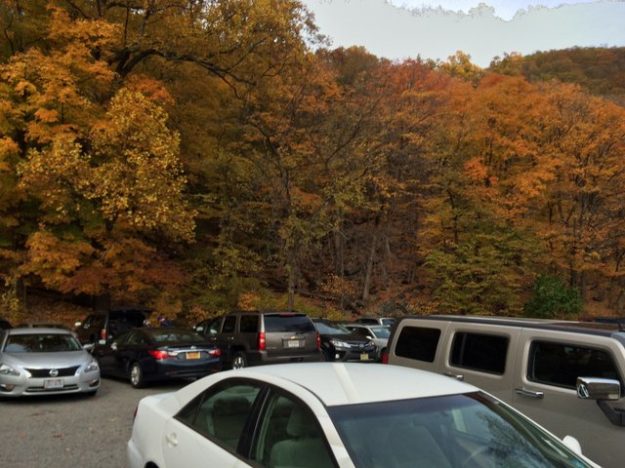 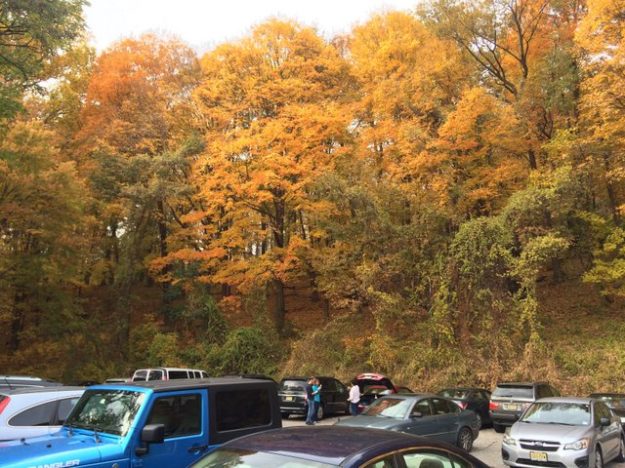 They’re slammed. So busy, in fact, that, among the 50 or so spaces, it’s unlikely most visitors will find a legitimate, demarcated parking place. Many drivers will park wherever they can find room, hoping they don’t get ticketed. Others will circle the lot until a space is free. And the rest will probably give up, pushing further to their destination after realizing that it’s a lost cause, they’ve already driven through the most dramatic aspects of the Delaware Water Gap, and anything else is probably not worth the trouble.

It’s not a destination—just a one-off. Too bad, because these parking lots offer immediate access to the trailhead leading up the side of Mt. Tammany (on the NJ side) and an ultimate linkage to the Appalachian Trail. 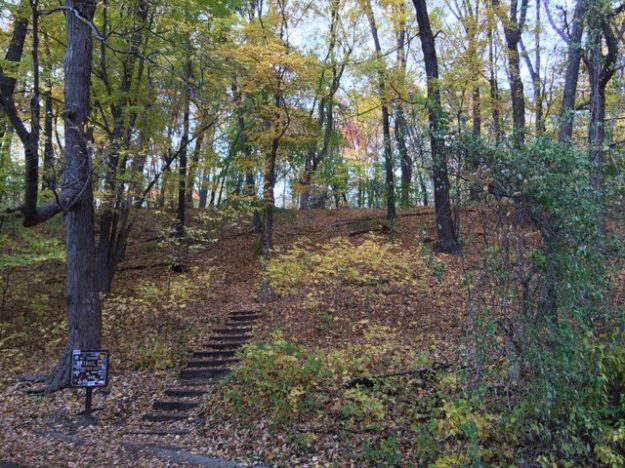 That said, most people who successfully park at this location are dilettantes. They don’t plan to spend a day in the woods. The treat it exactly as you’d treat any other scenic overlook: nothing more than a place for quick photos.   And they’re probably a bit disappointed, because there’s no immediate opportunity for a fantastic view. Instead, there’s hiking. I ascended the flight of stairs in the previous photo, then continued about another tenth of a mile up Mt. Tammany’s slope. By that point, almost all the other visitors had given up and I was alone. Even still, I’m really not that far in at all; I-80 is still easily visible through those trees. 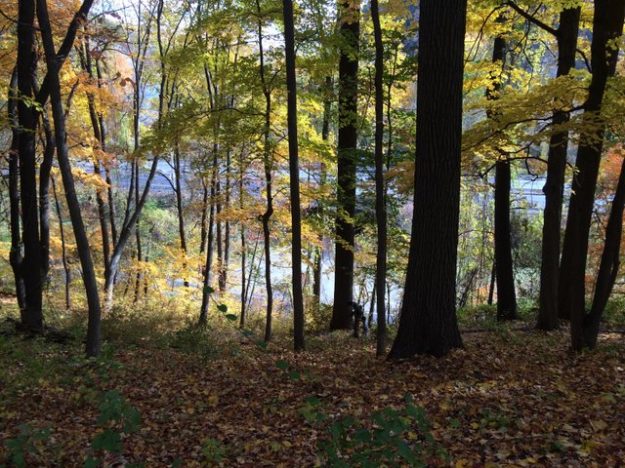 Maybe Delaware Water Gap isn’t special enough. I’m hardly the best judge, since my own visits to the park total about three hours (at most). But the Interstate Highway System rarely offers such front row seats to a region’s top natural features; if anything, these interstates usually avoid the great sites because they are both more difficult for road design from a civil engineering perspective, and massive highways tend to degenerate the ecological integrity of wilderness afforded by outstanding topography. We encounter an opportune topographic alignment combined with a near-perfect misalignment of transportation arterials and the outdoor economy. Maybe the Recreation Area gets magnificent use despite its relative obscurity. But the Delaware Water Gap’s convenience for ground-based travel also seems undermine its distinctiveness. At least a fraction of the thousands of daily motorists pull over to take a breath of fresh mountain air…punctuated with a cough from that car exhaust.

PrevNow that we’ve commercialized the facelift, it’s time to domesticate it.
Applebee’s in the age of UberEATS: you will get off your couch.Next

14 thoughts on “Delaware Water Gap: a landmark border crossing or simply a pretty place to pay a toll?”