Applebee’s in the age of UberEATS: you will get off your couch.

In this cutthroat era, there’s no point in subliminal messaging. This Applebee’s location in eastern Pennsylvania sure knew which way the wind blew. 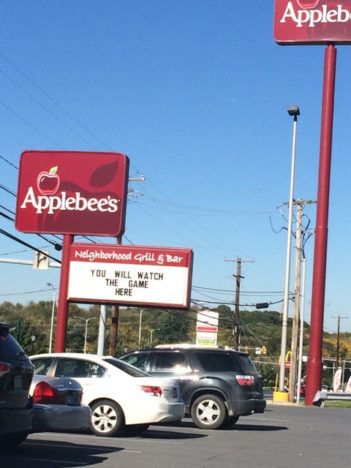 “You will watch the game here,” says the marquee. No cajoling—just some implicit coercion, all in good spirits. However, this pic comes from a beautiful Saturday in October of 2015.

And those were much more innocent times.

Throughout suburbia, it seems like the perfect combination: pull up to the parking lot at your closest branch of the Neighborhood Grill & Bar on a Sunday afternoon in the fall, and pivot between bites to one of the eight screens showing your favorite game.  And if you thinking I’m unfairly generalizing by referring to this scenario as quintessential suburbia, remember that we’re talking about Applebee’s here. Sure, some of them are in intensely urban areas—heck, Times Square has an Applebee’s—but everyone associates the brand with suburbia. Why shouldn’t they?

Love them or hate them, Applebee’s also until recently embodied the most stalwart of national restaurant chains. But that’s not necessarily the case any more: as independent restaurants have surged in popularity, particularly among urban-dwelling Millennials, their low-key demographic counterpart—an aging, cautious contingent that remains ensconced in the burbs—dominates the old standbys. But these conservative Boomers don’t spend as much. So that’s just not good enough to run a healthy profit. (And the more adventuresome Boomers are also driving into the hip urban neighborhoods to visit those edgy indies.)

Not only have declining same-store sales foisted middlebrow national brands into a multi-year slump, but some—even Applebee’s—have opted to close about twenty of their least profitable locations.  Even seemingly foolproof formulas like the higher-end Cheesecake Factory—that of the 30-page menu—have struggled.  The explosion of fast-casual restaurants, poised brilliantly between fast food and table-service oriented establishments, have helped spawn a explosion of mini-chains that, at least for now, boast high profitability. But people of all generations don’t linger around at those restos enough to watch a football game.

And so the hapless Applebee’s in the above photo may very well find itself getting felled by a double-edged sword. Many of the national chains are struggling. And I won’t begin to wade through political waters that seem to get rockier by the day, but NFL viewership is also giving less-than-subtle signals of a serious decline in viewership. It’s safe to assume at this point that things are going to get worse before they get better.  And with that in mind, how on earth could Applebee’s expect a football game to help it recoup some of that flagging revenue?

I’m no longer a regular in the suburban haunts where I caught the photo of this Applebee’s, but something tells me that, in 2017, the management at this location doesn’t make such a confident effort to lure diners with reference to the NFL. Then again, maybe I’m unreasonably assuming that the national HQ for Applebee’s hasn’t already placed this location on the chopping block. What a blow to the “neighborhood” that would be.

PrevDelaware Water Gap: a landmark border crossing or simply a pretty place to pay a toll?
How parochial can public education get?Next

16 thoughts on “Applebee’s in the age of UberEATS: you will get off your couch.”