South Bethlehem: A main street for the ages…with all the wrinkles we might expect.

The typical American city experienced such social upheaval after World War II that it’s almost impossible to find one—regardless of size—where the midcentury cataclysms did not exert at least some change upon the urban form. Bethlehem, Pennsylvania appears to rank among those that I can find with the least amount of scar tissue: bisected by the Lehigh River, the more prosperous northern side hosts multiple neighborhoods where 95% of the original century-old housing stock survives, complete with corner stores, carriage homes, pocket parks—you name it. I could speculate to no end as to the social and economic factors that seem to have preserved north Bethlehem so well, but that’s likely to prove a touchy issue—one that will require far more research that I’m willing to commit to at this point.

That river exerts a huge impact on Bethlehem’s unusual urban form. In some regards, the city offers the ever-rare bimodal downtown. The river itself, coupled with the industry flanking it, essentially pushes the commercial districts of the two sides farther away from one another, so that—despite the presence of bridges—they feel like self-contained districts. Two separate demi-cities. And it would take the average person at least seven or eight minutes to walk from Main Street in North Bethlehem to Third Street in South Bethlehem. It’s like a radically scaled down version of Midtown and Lower Manhattan.

In the meantime, between the two sides, most evidence will show that South Bethlehem took the lion’s share of the economic hit. For over a century, the southern bank of the Lehigh River—right before it makes a sharp 90-degree turn (and out spills the Saucon Creek)—hosted the mammoth Bethlehem Steel, the industry most instrumental in turning Bethlehem from a relatively modest borough into Pennsylvania’s seventh largest city. But that’s not all: Bethlehem and South Bethlehem really were two separate boroughs up until 1917, when they merged into a single city. So the presence of two downtowns makes perfect sense.

Despite its ups and downs—and its comparatively lower incomes to its northern counterpart—the neighborhood (and former borough) of South Bethlehem still looks reasonably intact, made all the more remarkable considering the city’s largest employer declined precipitously in output and influence. Finally, in 2003, Bethlehem Steel folded. The leadership at this company—whose heavy industrial “campus” comprises close to one-fifth of the City of Bethlehem’s land area—helped stave off complete bankruptcy for decades, all while carefully devising how to repurpose the vast real estate holdings after it faced an inevitable closure. My explanation is glib, but it at least in part helps justify why Bethlehem doesn’t look remotely like such other hapless steel cities as Youngstown, Gary, McKeesport, or Bessemer. It didn’t fold overnight, leaving a shell-shocked, one-industry town in its wake. As I indicated earlier, most of Bethlehem looks completely unfazed by its near complete industrial decline.

But telltale signs emerge. South Bethlehem’s main street (Third Street) alternates between preservation and renewal, with visually striking results. Here’s one side of the street. 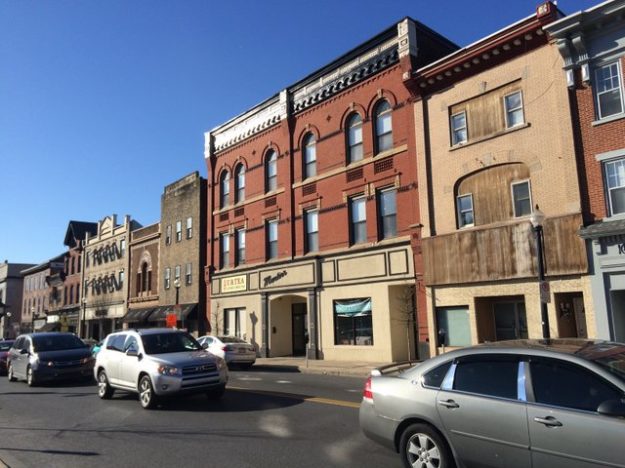 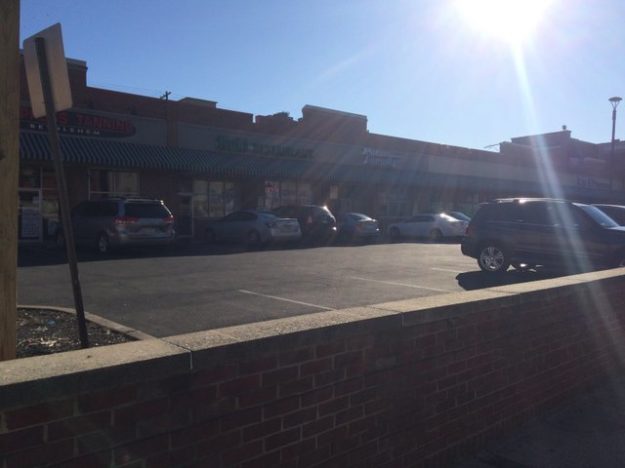 I’m frustrated that the sun’s glare is so bad on that second photo, but here’s an effective Google Street View that captures both sides of Third Street.

It’s a strip mall that stretches across the entire block, complete with parking out front. The urban form written over, where auto-oriented convenience has fully supplanted what no doubt once embodied a handsome, intact row of late 19th century commercial buildings. Taken from a different angle, it’s easy to see where the demolition took place; the blank party wall of the one surviving older building is visible in the distance, beyond the parking lot. 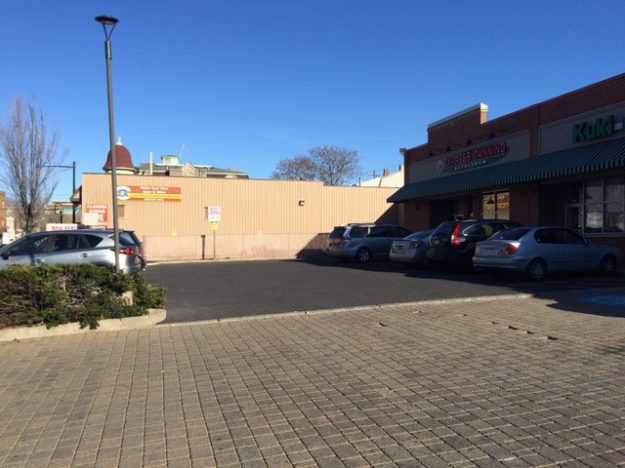 And that building in the distance is hardly an original; it’s sheathed in either wood planks or corrugated tin.

So what South Bethlehem offers here is a strip mall in the heart of its commercial center. This phenomenon is hardly uncommon; I’ve blogged about a similar instance in Danbury, Connecticut. But I’ve rarely seen one so glaring, so central, and so devoid of any efforts to aestheticize it. To be fair, it’s still a pretty walkable strip mall; how could it not be? It’s in the heart of South Bethlehem’s downtown, a densely populated area, replete with students from Lehigh University, and only two rows of parking. But, as my sun-stained photo above indicates, if I cut out the periphery and just show the strip mall, you’d think it’s the heart of suburbia.

I have no clue about the history of this little shopping plaza, anchored by a drug store. Maybe the buildings that preceded it all declined as long ago as the 1960s (when Bethlehem Steel first started hinting at its demise), and the City of Bethlehem lacked that preservationist foresight to save them from the wrecking ball. Maybe—as I suspect—a fire took out most of the block. Regardless, it’s clear that the subsequent commercialism operated under the ideals of its time: convenience, ease of parking, separated uses. In 1985—when I’m estimating the developer built it—it probably fit the market demand in a downtrodden area that couldn’t keep businesses operating in conventional storefronts.

The great irony is that, even as urban tapestries surrender their tautness and suffer the ensuing porosity, the old invisible hand comes by to tighten up the corners. A block down from this homely little strip mall, the conventional urban form returns to Third Street. 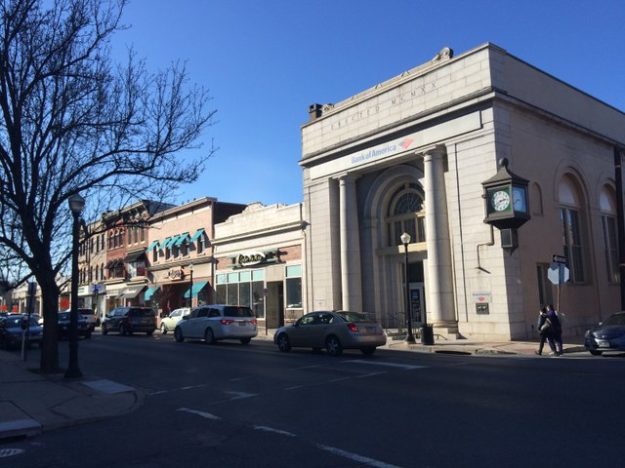 But then, further down, we witness a Perkins Restaurant, designed to the exact standards we might find on the side of a major highway. And cattycorner from it is a budget hotel, with a parking lot and brick wall engulfing it.

These days, thanks in part to the heavy investments and implementation of Bethlehem Steel’s plans for the repurposing of its steelyards, South Bethlehem is revitalizing—and so is Third Street along with it. But the most attractive and desirable real estate isn’t the strip mall with its cheap and easy parking. It’s those classic buildings with architectural intrigue, big storefront windows and apartment or office nooks directly above. The last I recall, the other tenants in the strip mall included a Chinese restaurant (with no website), a Laundromat, and a tanning salon. Not exactly the stuff of prime real estate. Elsewhere, downtown South Bethlehem is showing signs of a reawakening that may eventually help put it on par with the generally flourishing downtown of North Bethlehem.

The wounds of deindustrialization haven’t fully healed, but the scabbing is beginning to emerge: just blocks from the strip mall, a new charter school and a mixed-use residential complex have emerged—with more to follow. And all of it echoes the urban form of yesteryear—no parking lot and plenty of windows. Why not? It’s what the market demands. And, if South Bethlehem continues in this trajectory, over time demand may escalate for a higher and better use at the site of the Third Street strip mall: one that returns to the conventional forms that helped support a dense city of industry. And the scar will begin to fade.

PrevTourist traps and coastal cosmopolitanism—a profitable pairing.
The Deadwood dilemma: if they designed all their roads like this one, we would be dead.Next

2 thoughts on “South Bethlehem: A main street for the ages…with all the wrinkles we might expect.”