Murals for Mayberry. Or Peapack-Gladstone.

Over the last decade or so, we’ve witnessed an explosion of murals on the blank sides of buildings. Not surprisingly, it began as a largely big-city phenomenon, most prominently in Philadelphia, whose Mural Arts Program has achieved international recognition for the time, effort and artistry expended on these majestic, multi-story tableaus. (It has also spawned a higher level of non-sanctioned knock-off murals, some of which are quite accomplished on their own. Some are not.)

But now we can witness the mural trend creeping not just to much smaller cities like Kokomo, Indiana, but to the most nondescript reaches of suburbia. Take this one for example: 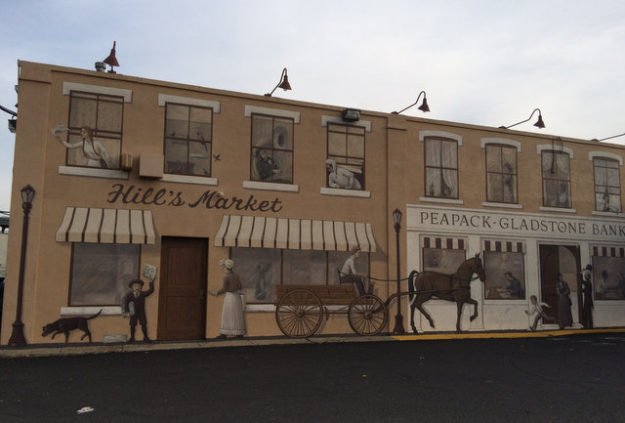 I can’t say I knew much about the Peapack-Gladstone Bank before I encountered this mural—I still don’t—but a quick search reveals it to be an established institution with a broadly visible presence across northern New Jersey. To the outsider, the name sounds cumbersome, but it’s actually an affluent borough in Somerset County, incorporated in 1912 out of two adjacent villages with shared interests (but two separate stops, Peapack and then Gladstone, on NJ Transit). Established in 1921, the bank now offers at least a dozen locations in this exurban portion of the New York metro. The location in the photo above sits just outside the larger, older, more urbanized suburb of Edison, and a fair distance from Peapack-Gladstone.

The aesthetic here on this mural is noteworthy for a variety of reasons. First of all, the bank itself clearly devoted time and money to its creation, and rightfully prides itself in the result: notice the carefully mounted lighting above, indicating they keep it illuminated at night. But the busy splicing of multiple vignettes in a single street scene also carries a none-too-subtle whiff of Rockwellesque nostalgia, which is perfectly appropriate, because most of Rockwell’s own works—the best known of which spanned nearly five decades at The Saturday Evening Post—were evocative of a previous era, even when they first reached the public. The sepia tones on this mural only enhance the illusion of oldness. But more ironic with Peapack-Gladstone Bank is that the image appears to come from the onset of the 20th century, a good twenty years before the bank’s founding. Let’s face it: the streets of a 1920’s vignette would almost definitely feature cars, and the women wouldn’t wear bonnets. But oh well: Peapack-Gladstone Bank seems to thrive on anachronisms. Pivot a bit to the right and you’ll see what I mean. 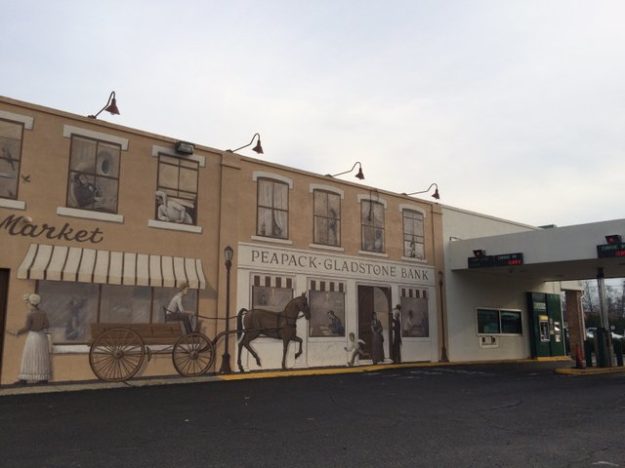 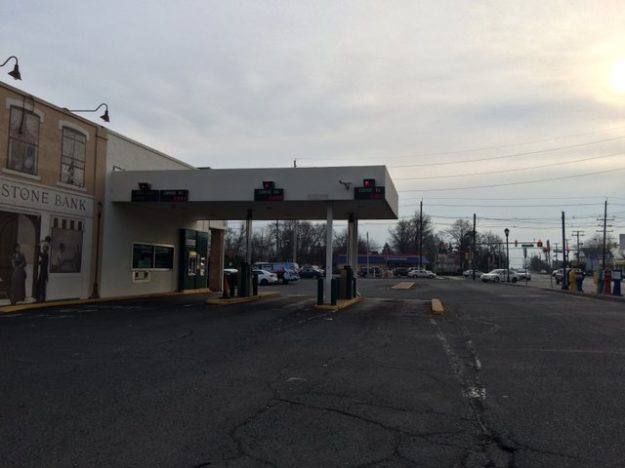 It’s the side lane of a drive-thru bank—a concept that almost certainly did not exist in 1901 or 1921. And here’s the front of the edifice that Peapack-Gladstone decided to spruce up. 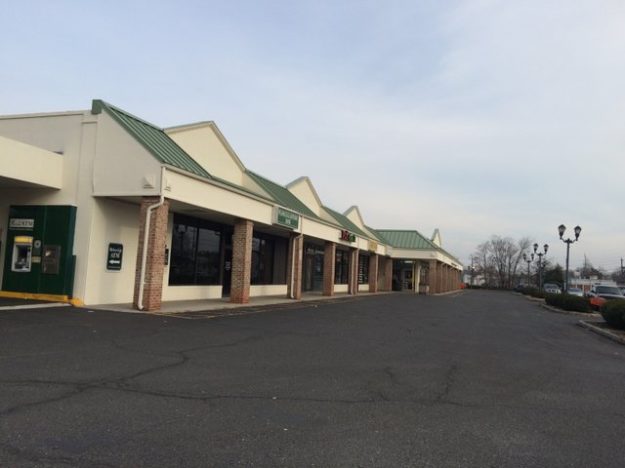 Nothing more than a strip mall, and a run-of-the-mill one at that.

Calling it “lipstick on a pig” just makes me an urban elitist, because the mural no doubt adds value to an otherwise uninspiring suburban street corner. And it hints at the reality of automobile-oriented design: the need for travel lanes, drive-thrus and parking lots results in a disproportionate amount of visible side walls…certainly far more than we ever would have encountered along a main street in 1900 (or 1920). Blank side walls, in turn, prove the optimum location for murals. I’ll cut my losses now, give some genuine credit to Peapack-Gladstone Bank for making the most out of its location (which undoubtedly works because of convenience rather than eye-catching beauty), and I expect to see many more strip mall murals in the future, as property managers desperately invest in a building typology whose mainstream viability is getting eclipsed by a digital shopping center that needs no side walls, nor parking lot, nor drive-thru: simply the portable convenience of a laptop computer.

PrevThe Deadwood dilemma: if they designed all their roads like this one, we would be dead.
A watering hole on the Detroit city line…with a special knock and password to enter?Next