The Deadwood dilemma: if they designed all their roads like this one, we would be dead.

Here’s a vote of no confidence in pedestrian infrastructure if I’ve ever seen one. 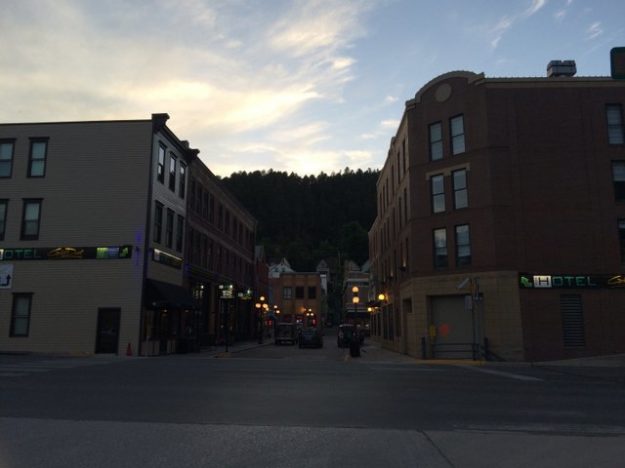 Not sure what I’m talking about? It’s undeniably a dark photo, but some context should help clarify things. We’re looking at the old mining town of Deadwood, South Dakota, a place that, in most respects, should venerate the pedestrian. After all, the town peaked in 1880. 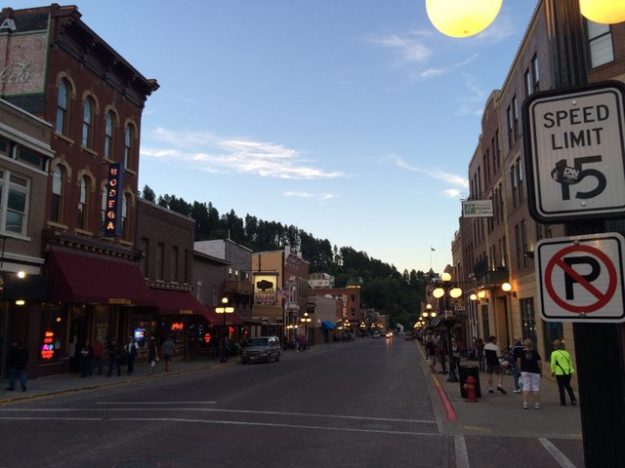 With a name like “Deadwood”, could it thrive as anything but an old Western triptych? The backdrop and title for the short-lived but highly regarded TV series, it probably owes much to Deadwood’s enduring post-cancellation popularity, but it would have been at least a minor attraction regardless.

Deadwood, South Dakota is one of several tourist-filled towns (probably in some regards a “trap”) nestled in the picturesque Black Hills. Most of them function as villages that essentially supplement the outdoorsy activities in the huge park by providing a commercial/lodging counterpart: towns like Keystone, Custer, and Hill City probably originated under a different premise, but today their reason for being is to serve the throngs who come each year to see Mt. Rushmore, among other things. The Black Hills National Forest is a full-day trip, if not two days (or even three and four), and it’s big enough that many people will seek overnight lodgings in structures with four walls, a roof, and heat. (That’s right—in the Black Hills, even in July it can get chilly at night, despite the fact that it routinely pushes 90 degrees during the day.)

So Deadwood is another municipality nestled in the Black Hills that subsists on tourism, but, unlike the others, it’s not quite an accessory to the vast parklands. The town itself—its appearance, its character—are truly the main attraction. Deadwood is South Dakota’s pre-eminent wild western revival town. And it would probably attract almost as many crowds even if it sat hundreds of miles from any major natural feature. 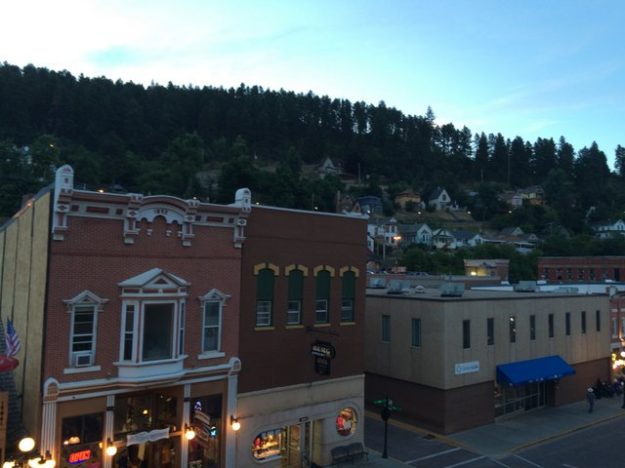 An illegal settlement on lands that the U.S. government promised to the Oglala Lakota people, Deadwood quickly bloomed in the 1870s into an modern, advanced town, with electrically illuminated street lights laced across the streets at a time when major American cities still depended on gas lanterns. Like most Western towns that subsisted on a single industry, Deadwood only maintained its peak population of around 5,000 for a brief time. Unlike the others, the infrastructure was strong enough to keep it reasonably stable: it wobbled around 3,500 for much of the first half of the 20th century, then began a precipitous decline after World War II.

Today, about 1,250 people live in Deadwood’s limits. But it’s still got the architectural bones of a city quadruple its size. So how can the remaining inhabitants keep it viable? It helps that the town is a National Historic Landmark—the highest rating American preservationists can bestow to a community—and it was one of the first places outside of Nevada to explore gambling. (Perhaps “reintroduce” is the better word: in Deadwood’s rough-and-tumble early days, gambling and prostitution served as the town’s second and third greatest industries. The latter continued to serve as an illicit attraction until a raid shut down the last of the brothels in 1980.) 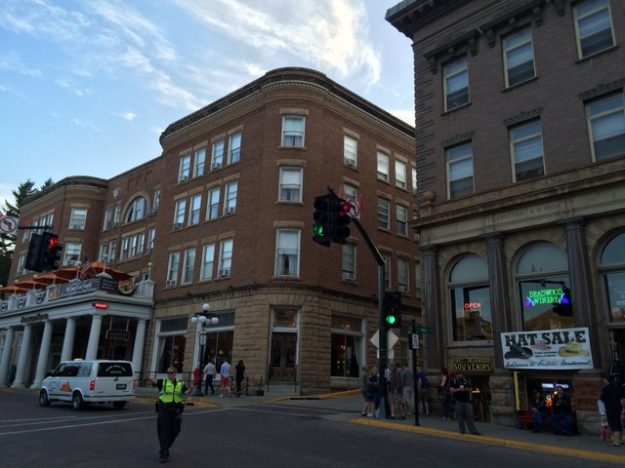 Deadwood is worthy of a far greater exploration than I’m going to offer here, but stay tuned: I’ll delve deeper at a later point. The intersection in question (the one I featured at the beginning of this article) simply demonstrates how the town must reconcile its most appealing characteristic—its well-preserved, walkable core—with the fact that it sits squarely in a sparsely populated area that requires lots of visitors in cars (or maybe tour buses) to keep its underutilized streets and buildings animated. The primary highway, Alternative Route U.S. 14, gets labeled Lower Main Street, within the Deadwood limits, but it’s hardly the primary commercial drive. (The business district rests on Upper Main Street, with all the glittery storefronts.) As this Google Street View shows, Lower Main is a busy arterial for motorists just passing through.  The engineers even turned the highway into a sort of vehicular culvert, with walls on both sides to keep pedestrians from crossing at unauthorized points. Take a look: 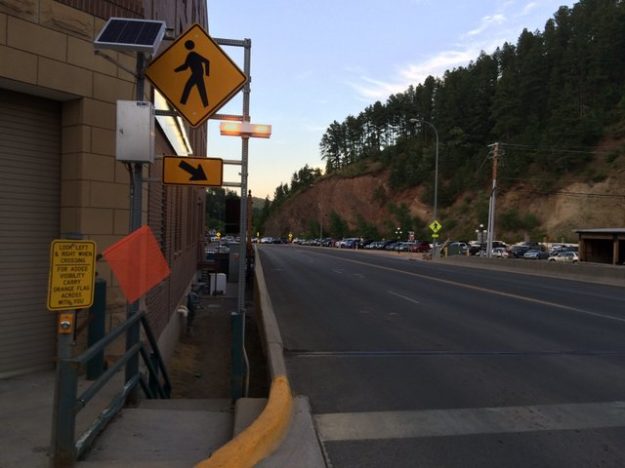 No sidewalk on the left side of the street, and the concrete wall stretches on the other side as well. I’m standing at one of the few places where the public works department has authorized pedestrian crossing.

But they don’t make it easy. See that orange flag in the photo above? If you can’t read the sign next to it, here’s a better glimpse. 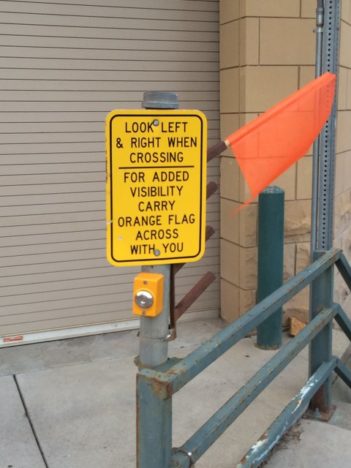 Pedestrians get to serve as their own crossing guard! To some extent, they have no choice. High-speed traffic careens down Alt U.S. 14, rounding a bend to a pedestrian crossing at a minor street with no stoplight. It’s an added safety precaution, which I presume only exists because engineers—or a hapless pedestrian—learned the hard way. One more look at the full apparatus helps clarify. 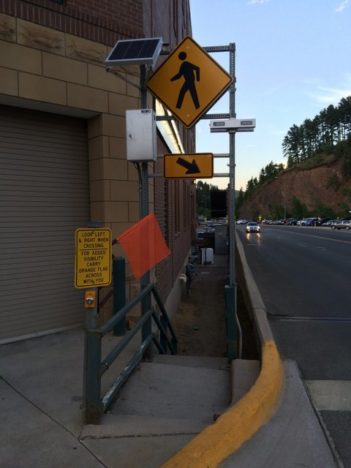 Lower Main Street is a bypass that postdates Deadwood. It barely even engages with the town’s buildings. Notice how, instead of a sidewalk, the margin to the right of cartway serves as a sort of repository for the adjacent building’s HVAC. Very few buildings directly front Lower Main (Alt U.S. 14). The real commercial spine is a block away, at Upper Main. 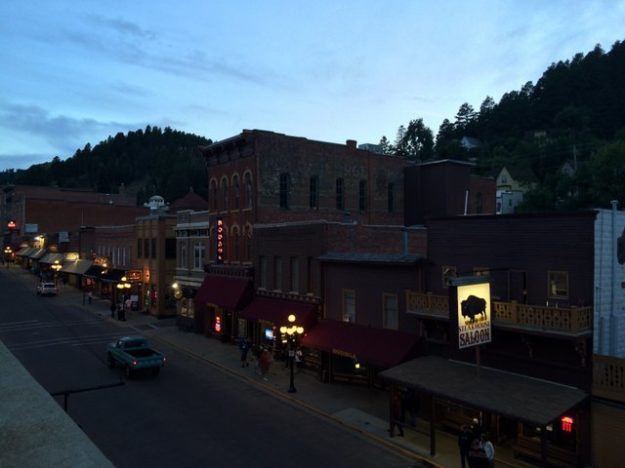 During an era far less sensitive to pedestrianism, the traffic engineers built a busy four-lane highway so that motorists could speed through Deadwood, presumably to reach the adjacent town of Lead—another gold rush community that has not benefitted from the same mystique. Now the remainder of Deadwood—and all its visitors—must contend with it. Given the cost of reorienting the highway far surpasses the return on such an investment, the engineers have instead punctuated it with provisions that at least make it less dangerous. And why not? In a frontier town borne out of an “anything goes” mentality, the least we can expect is that average citizens gets to appoint themselves traffic cops, at least momentarily. We can rest assured that a town like Deadwood has seen far more radical vigilantism in its past.

PrevSouth Bethlehem: A main street for the ages…with all the wrinkles we might expect.
Murals for Mayberry. Or Peapack-Gladstone.Next

8 thoughts on “The Deadwood dilemma: if they designed all their roads like this one, we would be dead.”