The dog park: more possibilities than you can shake a stick at.

By this point, they’ve become almost as multifaceted as the dog breeds themselves.  Much like murals, bike lanes, and decorative sidewalk benches, the dog park has become a fundamental amenity in urban settings…and not just the alpha and beta cities. The gamma, delta, and yes, even the communities that many would hesitate to call a city—virtually all of them face escalating demand among constituents for a dog-themed playground of sorts. Since I’ve blogged about each of the first three amenities, I was due sooner or later to take a stab at the fourth. Though we may have little to no reason to visit a dog park, most of us at least know what they look like…right?

It’s not as simple as that, which is why these pet provisions have gotten a lot more interesting. As they’ve evolved from a novelty to a routine amenity, the standards for what constitutes a superlative dog park have morphed in tandem. The ascension of the dog parks at least partly reflects shifting constituent demand, but it also owes a great deal to collective reactions from previous mistakes—often learning the hard way and facing the consequences through litigation. Unmaintained and unregulated dog parks have on occasion resulted in injuries, both to the dogs and their humans. It’s rare—perhaps even unheard of—for a municipally sponsored dog park to consist of a mere chain link fence, a gate and a scruffy patch of grass. These days, they have rules. Often lots of them. 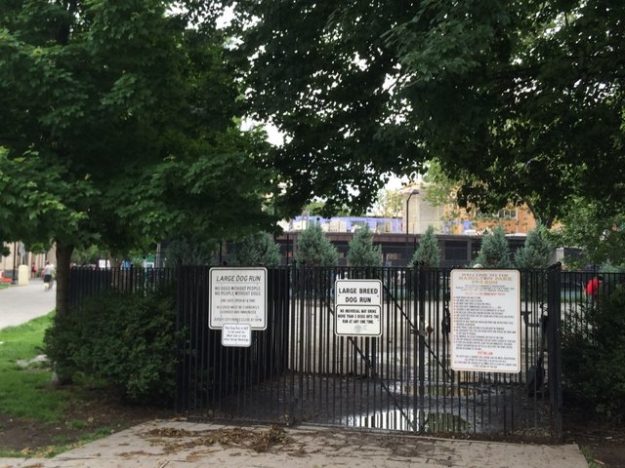 The photo above comes from a prominently located dog park in Hamilton Park, the center of a neighborhood in Jersey City that shares the park’s name. The park itself has all the trappings of an urban space that America’s original urbanophile, Jane Jacobs (of The Death and Life of Great American Cities fame, among many other works), would have lauded. It broadly shares the built form, the mixture of uses, the population density, and the variety of building ages in common with her favorite civic plazas: places like Washington Square in Greenwich Village Manhattan or Rittenhouse Square in Center City Philadelphia. 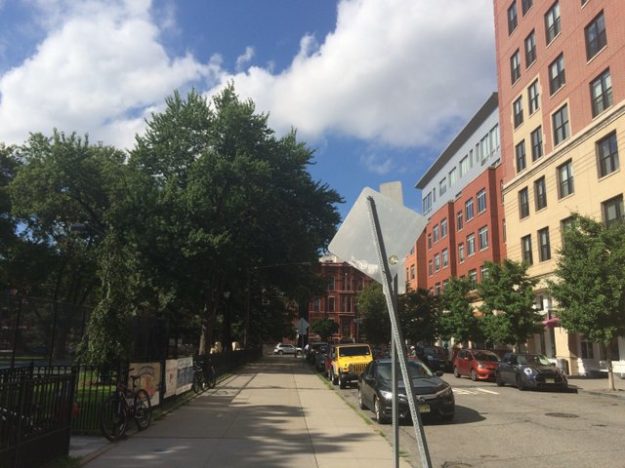 In the photo above, the park is on the left; the dense housing/retail is on the right. 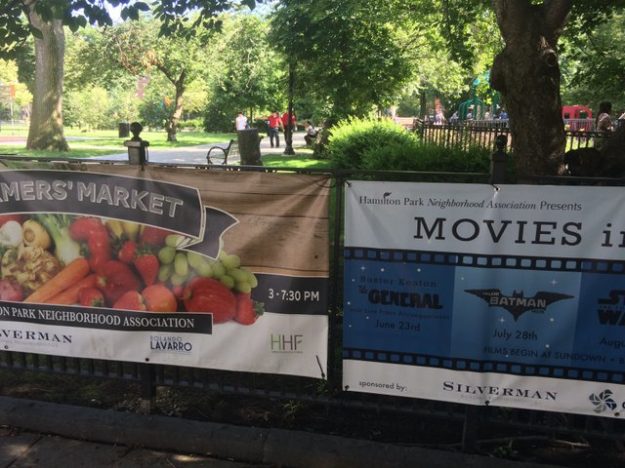 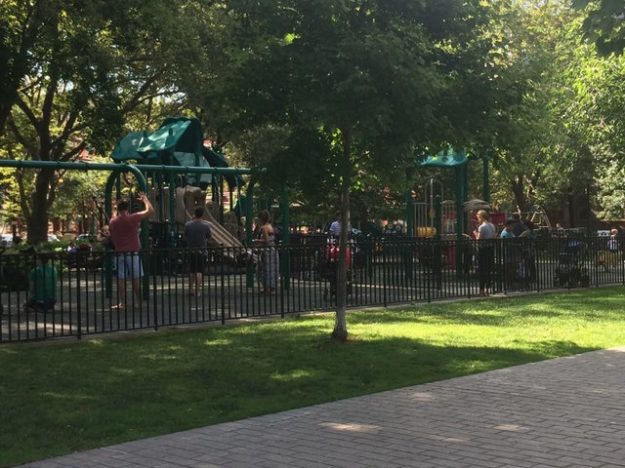 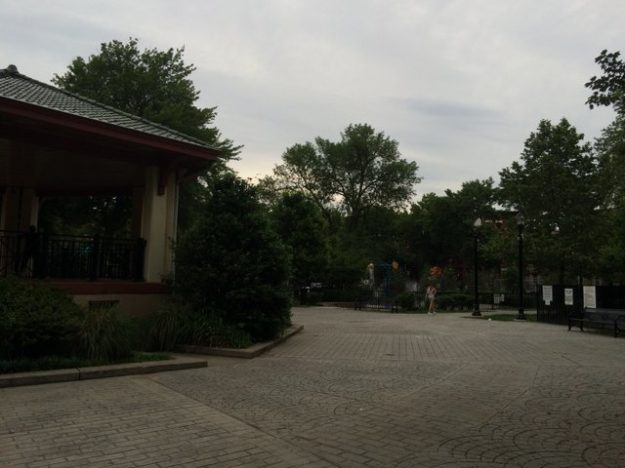 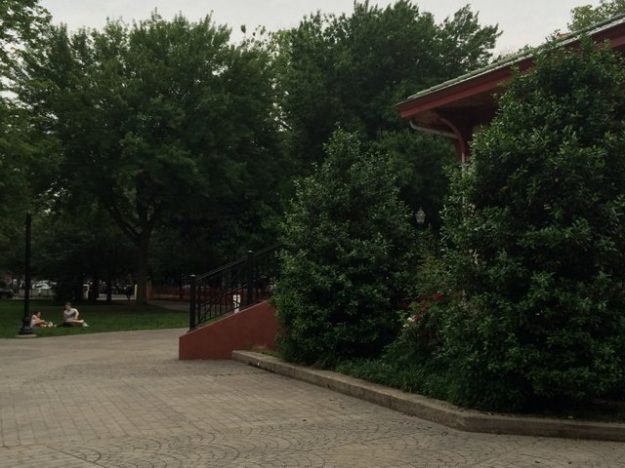 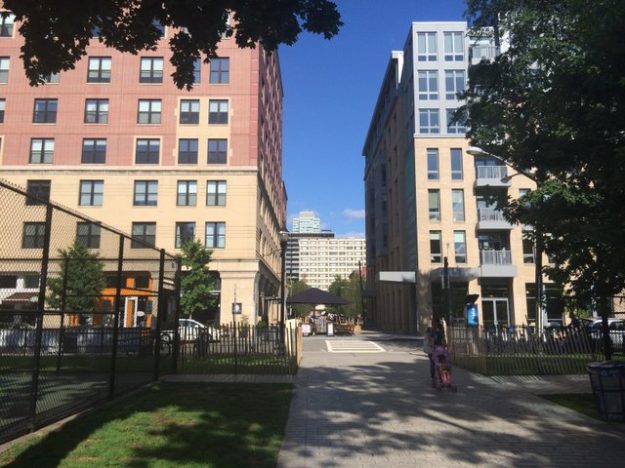 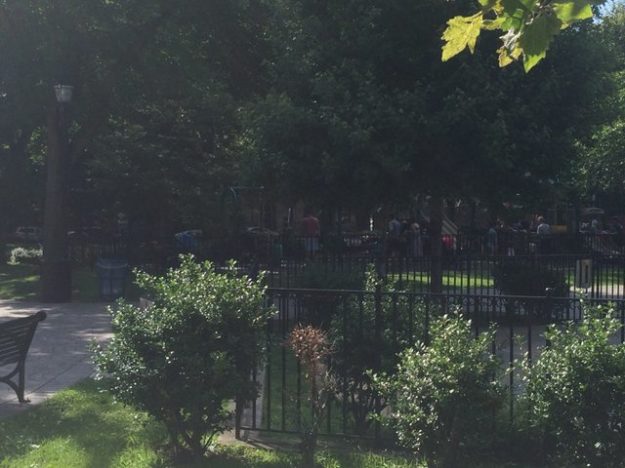 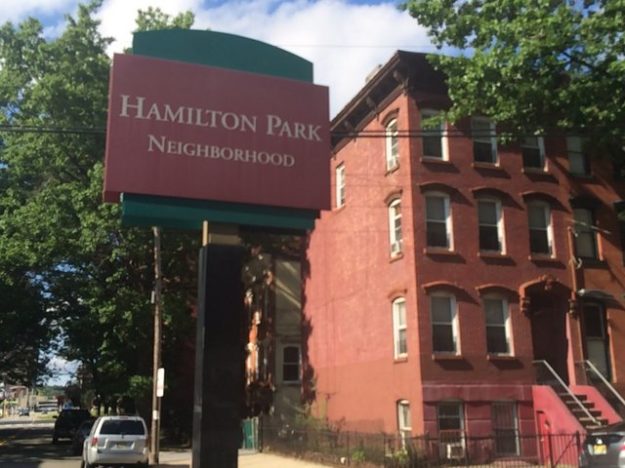 Playgrounds, water features, a large gazebo…you name it. These recreational enhancements no doubt amplify the appeal to the park, but, as I cynically wrote about Campus Martius in downtown Detroit a few years ago, loading a small public space with allurements doesn’t always achieve the desired effect. That said, if a park already has the ingredients for vibrancy—the ingredients that Jacobs loved about Rittenhouse Square—it’ll probably enjoy round-the-clock usage, regardless of the other trifles the local Parks and Rec Department installs. Hamilton Park has it in spades. And a dog park too.

Now, about that dog park… 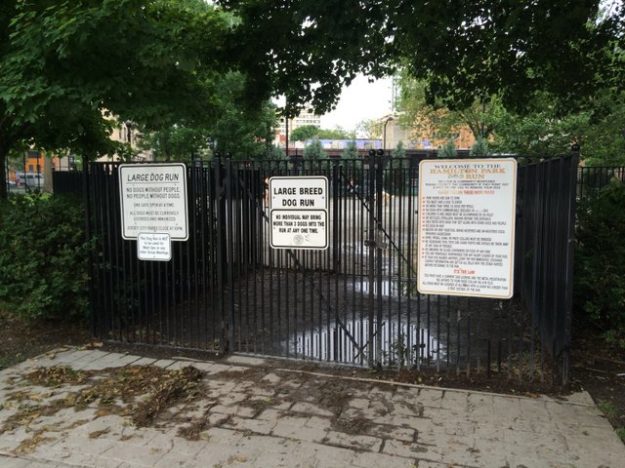 Long before they became ubiquitous, these canine communes enjoyed a vibrant life in busy urban centers…places like Hamilton Park in Jersey City. Affluent young urban professionals, who are as likely to own a dog as they are unlikely to spawn a child, naturally sought spaces for Fifi and Fido to roam, particularly given the scarcity of large, contained green spaces in most cities, where people rarely enjoy back yards of any great size. The dog park fulfilled that demand. And I suspect that the earliest dog parks consisted of the bare minimum: a fence, a gate, a water tap.

These days, they’re a lot more complicated. My first real experience with a dog park was in Greenwood, Indiana, a suburb of Indianapolis, which had an attractive space with an acre enclosed in reliable fencing. 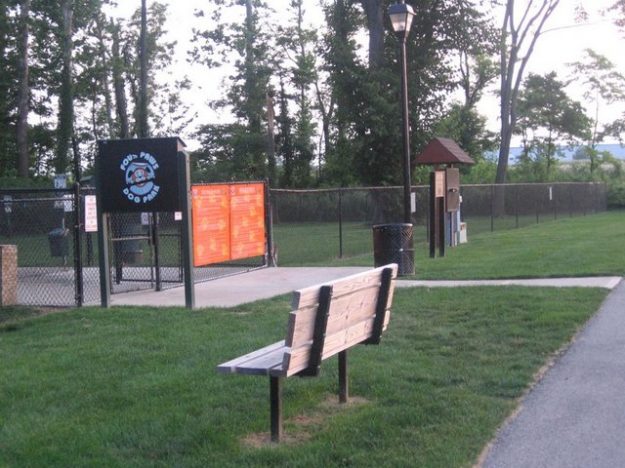 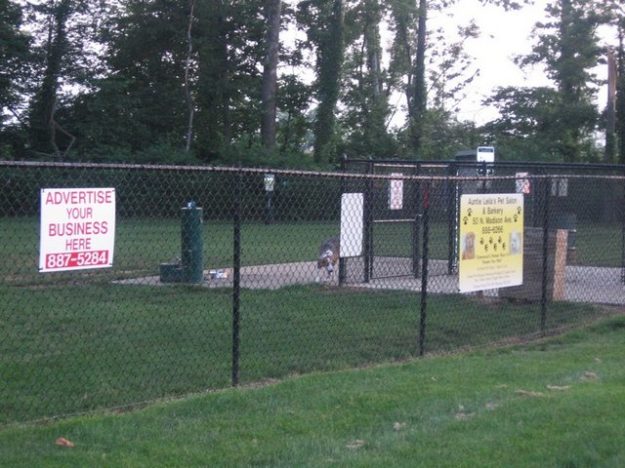 At the time of these photos (2009), the park featured rudimentary obstacle courses for dogs, drinking fountains, and little baggies for picking up their poo. But it also had an fob-activated electronic gate, and the only way to get a fob (and thus to access the dog park) was to pay a monthly fee to Greenwood Parks and Recreation, while providing proof that the pooch was up-to-date in all the standard vaccinations (rabies, heartworm, distemper). But the dog-owners also had to prove their pets had received vaccinations against the less-common kennel cough, which any many cases required them to make a separate trip to the local veterinarian to incur an additional charge.  It didn’t seem to deter that many people, though, especially on a comfortable summer day.  Dobermans would romp with Dachshunds.

After several visits, I deduced that the Greenwood dog park was successful enough, employing the public sector’s police power to promote health, safety and welfare of the dogs (and their owners) without getting so bureaucratic that it turned too many people off. Then again, when the weather cooled in late fall, attendance at the park thinned to nearly nothing. While some dogs can still enjoy running around alone, it usually fails to stimulate them for more than a few minutes, defeating the purpose of exercise. Therefore, the Greenwood park appeared only a moderate success, exacerbated the fact that most people in the Greenwood area are homeowners with ample back yard, affording their dogs plenty of opportunity to run around on their own. 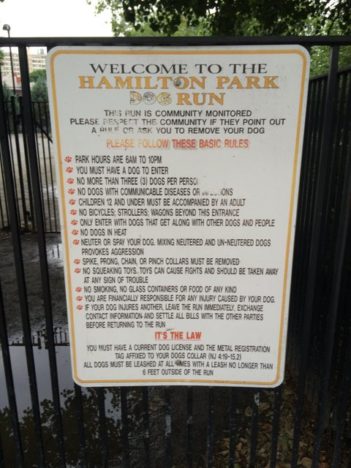 The rules are extensive, yet many of them suggest that, unlike the one in Greenwood, they rely on honesty as the best policy. No fob-activated gate, no evidence of vaccinations, and any accidents are your responsibility. Other dog-owners get to vote the more aggressive dogs (or the less discipline-minded owners) off of the island. Collective policing. I suspect this works well enough.  If it didn’t, and numerous dog-owners sued the City Parks and Recreation Department, we wouldn’t witness such a laissez-faire approach. 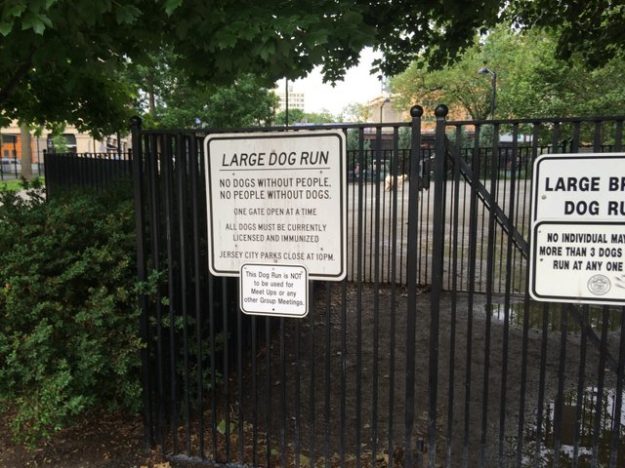 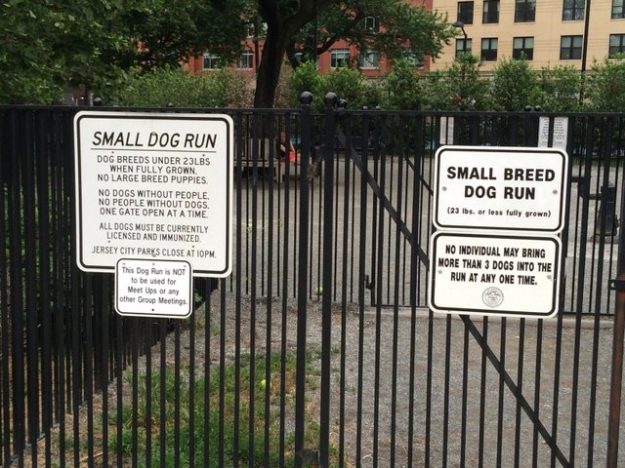 It segregates the dogs by size. Two parks in one, and if you try to bring a Rottweiler into the park reserved for Shih Tzus, you will inevitably encounter resistance by the remaining dog owners. The City probably determined that this basic sequestration helped preclude the overwhelming majority of dangerous canine confrontations.

But also fosters an interesting and none-too-surprising dichotomy. After multiple visits, the small dog run generally appeared either moderately active or downright slammed. A thriving space for bipeds and quadrupeds. 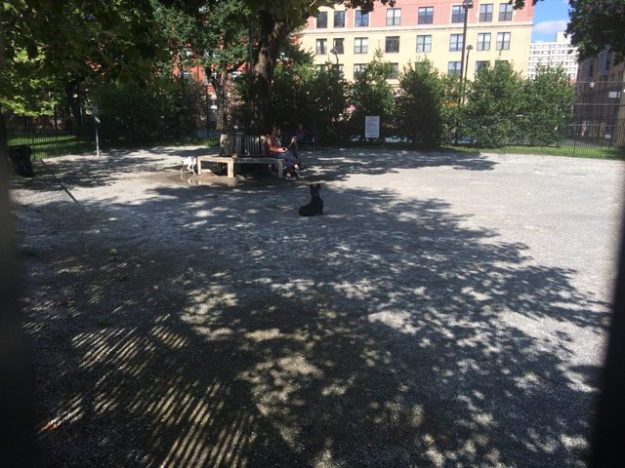 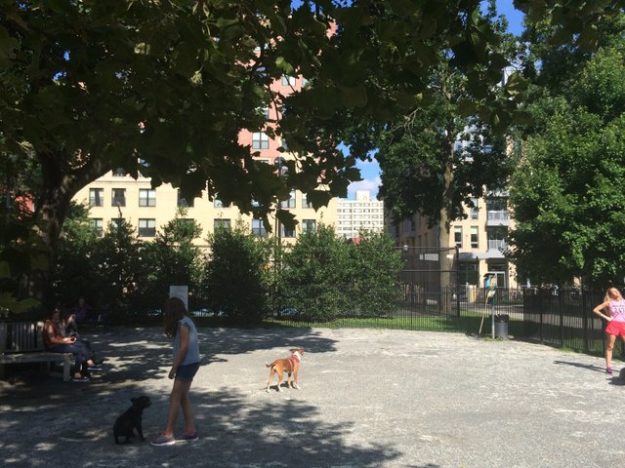 I’m happy this crowded neighborhood features a centralized place for the animals to run and play, but let’s get real here: it doesn’t take a good pair of eyes to see that the dogs behind the wrought-iron gate were well over the 23-pound limit. So these people were breaking a fundamental rule; so much for that community policing.

Meanwhile, what about that large breed dog run? 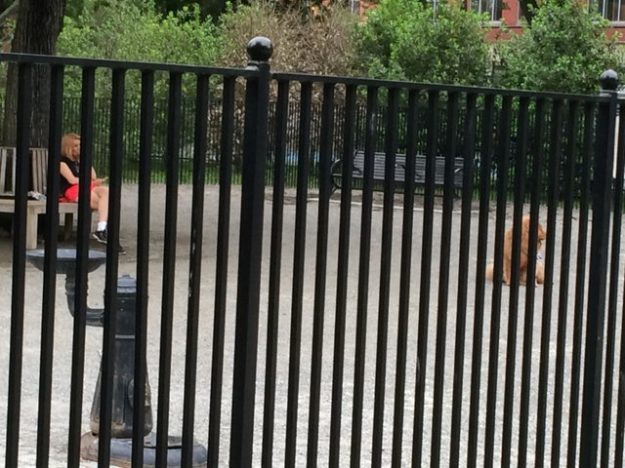 Not vibrant at all.  And on a sunny day, it’s no better: 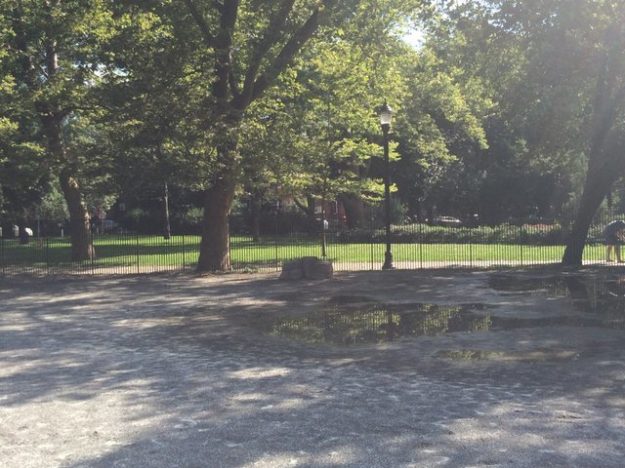 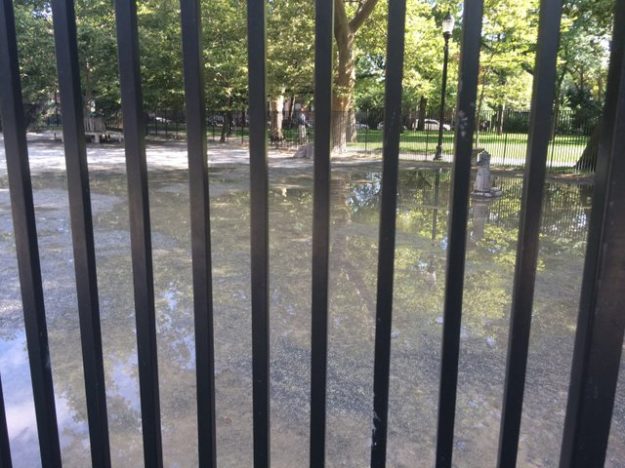 Perhaps the poor drainage in the large dog run repels visitors, which was noticeable during two separate summer visits. But it’s equally probable that the small breed dog run gets greater usage due to the urban setting, the smaller housing units, and, consequently, the tendency for city folk to gravitate toward Malteses over Mastiffs. A neighborhood like Hamilton Park simply hosts far more small dogs, and the few big dogs might get awfully lonely without playmates, regardless of size.

My more recent trip to the dog park revealed one other interesting consideration, again in the far livelier small dog run. 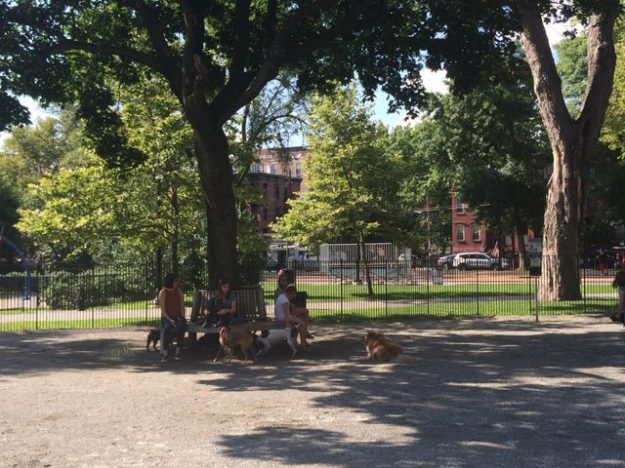 Notice the reclining dog to the right of the tree. Here’s a zoom-in: 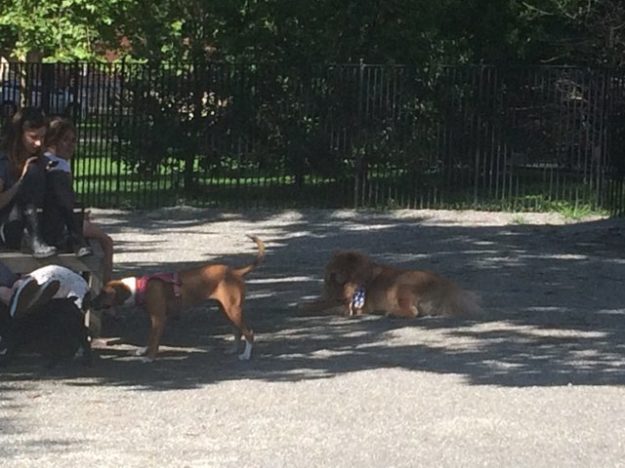 It’s a Chow Chow, or at least a Chow mix. Not only do adult Chows clearly exceed the 23-pound threshold, they have a reputation for aggression, with humans and other dogs. Unflaggingly loyal to their immediate masters but often no one else, Chows routinely fall onto regulatory lists of dangerous dog breeds, sometimes resulting in municipal bans. But here’s a Chow Chow, against all odds, in the small dog run with a bunch of other pups it could easily intimidate and injure. Then again, I witnessed this Chow get up and walk briefly, which revealed the creature to be arthritic and probably elderly. Perhaps not a threat after all, and the other humans knew this, because they knew both this Chow and its owner.

Obviously I’m speculating, and I could have captured the dog runs at a distinctive moment.  (At another visit, I saw a Chow—perhaps a different one—in the small dog park all alone, while multiple dogs of varying sizes crowded the big dog run, ostensibly to avoid the Chow.) Regardless of what happens at this tiny partitioned plaza, it effectively demonstrates a variety of concurrent social signals, pre-empting the rules as the individuals see fit. As the sign indicates, “This run is community monitored.” Collective good judgment elicits the appropriate level of policing.

But the signals don’t stop there. The dog park represents an extension of what people crave most in urban spaces: a milieu that promotes random spontaneous encounters, not just between carefully monitored dogs, but their masters too. In this day and age, Hamilton Park’s (mostly) yuppie dog owners voluntarily commune to exchange further signals about their tastes, professions, personality characteristics and even income levels, specifically by what type of breed they own. Lastly, these breeds signal compatibility among the dogs themselves, and if the owners coalesce into a coterie of canine connoisseurs, they’ll learn to distinguish the bad Chows from the good.

I suspect that this Jersey City dog park has avoided a morass of litigation (and ensuing corrective regulations), but even if it eventually gets as bureaucratic as the dog park in Greenwood, the well-heeled neighbors will shell out the money so they can take their pets there. After all, there’s no other big, open, enclosed space for them to run around off-leash. The only condition that might cause these dog parks to fade is if a large, aggressive breed becomes super-trendy, in which case the large/small dog sequestration will become sacrosanct. Until then, the breed du jour remains the clown-prince French Bulldog. Or is it the greyhound? English bulldog? No harm no foul.

7 thoughts on “The dog park: more possibilities than you can shake a stick at.”