Department store downward spiral: at least the shelves are stocked.

In these lean times, hardly a day goes by that our preferred media outlets don’t promulgate another gloom-and-doom indicator regarding the retail sector: a national chain cutting locations, more chapter 11 filings, an Amazon buyout. A number of syndicates and even some independent outlets have taken a more visual approach, documenting the dire straits of department stores through photographs showing how poorly maintained (or, in some cases, how bereft of merchandise) they are. I’d flag this for truly tawdry journalism, because it requires little more than trolling around with a camera, peeking up corporate America’s skirt–i.e., clickbait followed by little real analysis. But that would make me a hypocrite, since I’m guilty of it myself. Earlier this year, I exposed the desperate cost-cutting measures J.C. Penney has taken, and my act of photographing the department store’s dimly lit entrance nearly got me kicked out by mall security.  And, of course, I couldn’t resist at least a few snapshots of the pathetic displays at the neighboring Sears.

And now, in the interest of churning out a quick article while I manage a few other irons in the fire, I’m at it again. But hey—at least I’ve got analysis. And this is something I haven’t seen before, at least not in this context. 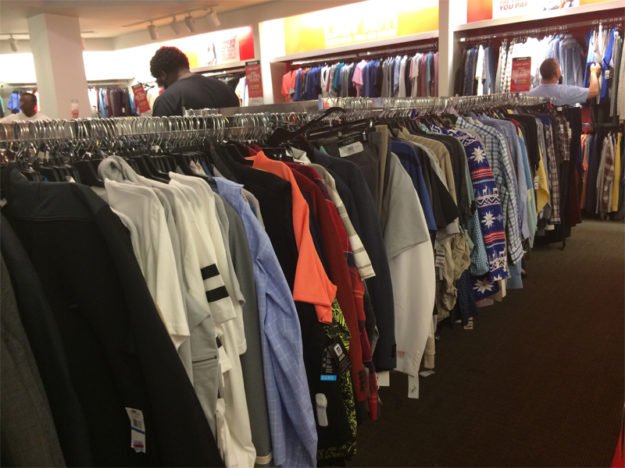 Sure, it looks like another jumble of clothes, crammed together on a rack. We’ve seen it all before, particularly in recent years, when more and more department stores lack the staff to maintain cleanliness and aesthetics to their presentation. But this isn’t an isolated display. 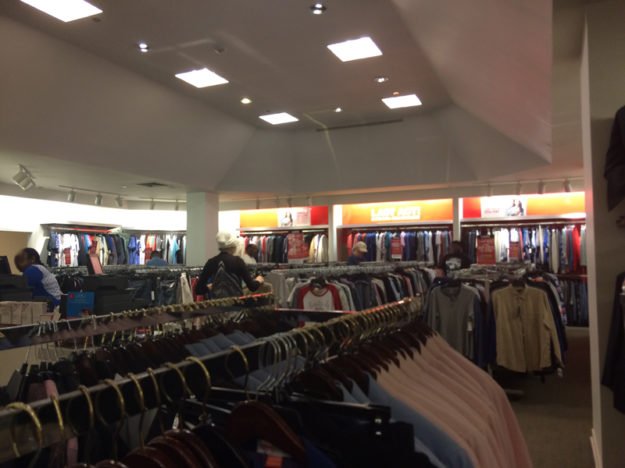 It’s the whole dang section. And it’s not a T.J. Maxx or a Big Lots. (Those two seem to be doing well.) Nor is it an explicitly labeled clearance section.

It’s a wing within a Macy’s—which as recently as a decade ago was the pre-eminent upper-middle department store across the country. And it’s not even a mall that, by any standard metrics, is struggling. It’s the Fashion Centre at Pentagon City, in prosperous Arlington County, Virginia, just across the river from the National Mall (and, in keeping with its name, a stone’s throw from The Pentagon). Not only is this mall brilliantly positioned in the middle of a surging, white-collar area, it’s broadly accessible by highway, subway (DC Metro), and even by foot, through the hundreds of residents in the high-rise apartments that surround it. And stalwart Simon Property Group runs the place—the largest and generally most successful mall manager.

Most of these retail montages with the empty shelves and ramshackle displays have targeted Sears and Kmart for ridicule. But here an entire wing of Macy’s appropriates the presentation of a Goodwill. And that’s not really being fair to Goodwill, because even if their clothing racks are hopelessly cramped, they often group the hanging clothes by color. Why would Macy’s stoop to this level, especially in a mall that, by almost all metrics, is performing well above the national average? (The other department store is a Nordstrom—usually a good sign.) My only guess is that staffing is so sparse that they’ve all but given up on the neatly folded, mannequin-centered displays, because they’ll never have the manpower to keep them looking good. Rather than attempt something bold and fail, it’s better not to attempt at all. A disheveled arrangement of shirts doesn’t turn the inventory any better than the “discount” approach, and it certainly leaves the sales associates at Macy’s more time to focus on answering customer questions or simply ringing up those purchases as quickly as possible.

If Macy’s continues to operate as a bricks-and-mortar outlet in the years ahead, I suspect we’ll see self-serve kiosks, much like we already have at department stores. They’ll prevent stealing by allowing the customers to automatically remove those bulky security tags by sticking it within a mechanism on the kiosk after they have purchased it. And the few remaining sales associates will devote all their time and energy to Nieman Marcus-level service…and maybe, at that point, the displays will look good again.

Or, Macy’s could go the other route and just start competing with the few vendors that seem to have discovered a successful model in this economy: T.J. Maxx, H&M, Forever 21, Ross, and Salvation Army.

PrevThe Maryland flag: anything but a flop.
City View Church: an old, urban fedora atop a young, suburban head.Next

6 thoughts on “Department store downward spiral: at least the shelves are stocked.”