Religious conservatives have bemoaned the perceived encroachment of secularism in this country for decades, manifested most powerfully through surveys over the last few years that reveal an unequivocal rise in religious “Nones”. Credible those these results may be, polls do not always align with on-the-ground manifestations of those surveyed sentiments, as the data collected before the 2016 presidential election proved.

Empirical assessments of religious landscapes reveal mixed results, in terms of the health of overall faith communities. The abandonment of churches—or, at the very least, their vacation for other, secular uses–would indicate, at first blush, a gradual departure from spirituality. And some organizations have thrived on the basis of converting empty ecclesiastical real estate into other purposes, most notably housing. The argument that Americans are systematically abandoning religion would hold more ground if no evangelists were constructing new churches. But anyone who’s witnessed an exurban landscape knows clearly knows they are. And the megachurch is a phenomenon from the last forty years or so, indicative of a sort of consolidation of the faithful from smaller parish structures, usually leaving traditional denominations into a more autonomous, non-denominational structure. Meanwhile, the concept of storefront churches—fledgling congregations with few assets but a need for facilities—has entered the mainstream, scattered across hundreds (or thousands) of ailing shopping centers across the nation. As result, it’s perfectly reasonable to assert that, just like we’ve witnessed residential and commercial sprawl, church sprawl is a “thing”.

But the perpetual religious drift is not entirely tantamount to the abandonment of tradition. The physical requirements for a church are quite simple, resulting in a built form that is among the most malleable of mainstream land uses. (And church design stands strong as one the most potent niche fields for architecture scholars and dilettantes.) Nonetheless, amidst the ostensibly escalating spiritual turbulence, and a growing love for funky church design, sometimes the timeworn traditions hold strong: 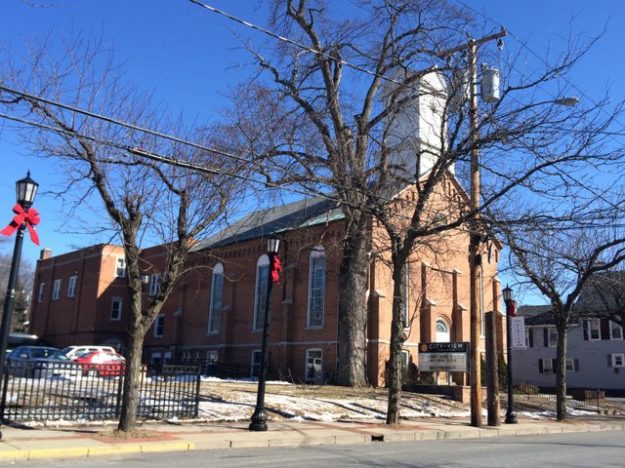 It’s a nearly century-old church in Scotia, a village immediately northwest of downtown Schenectady, New York, just across the Mohawk River. And it appears to be doing fine: well maintained, landscaped, a colorful marquee out front. But that sign betrays a certain need to reconcile the church’s past from its present: 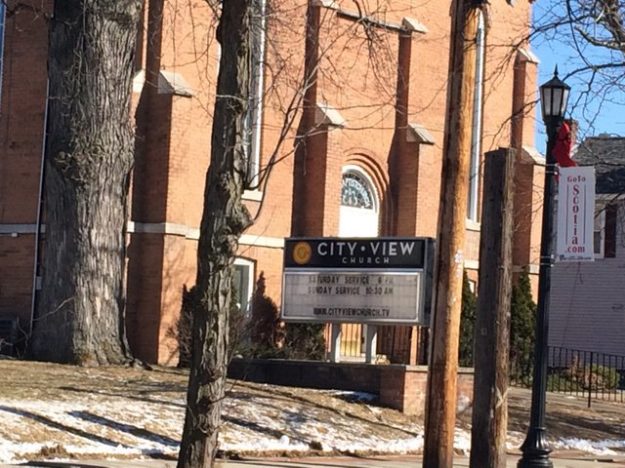 City View Church demonstrates a vivid color contrast between its background and logo, it deploys a contemporary sans-serif font, and it makes no reference to its denomination. In other words, the aesthetic sensibilities conveyed by the sign pose an overt challenge to the sturdy timelessness of the brick building just a few feet away. Did the leadership at City View Church attempt a rebranding to attract a younger demographic that might otherwise deduce that the atmosphere in the church is as old-school and stuffy as the building itself? Without knowing many details beyond the institution’s website, I’d wager the answer is “yes” or “true” to all the assertions in that question, with the exception of one tiny detail: the prefix “re” before “branding”.

City View Church didn’t rebrand; it is the brand for today. It’s not an old church that has donned a new suit; it’s a new church in an old building. Check out the decorative glass feature at the entrance’s transom: 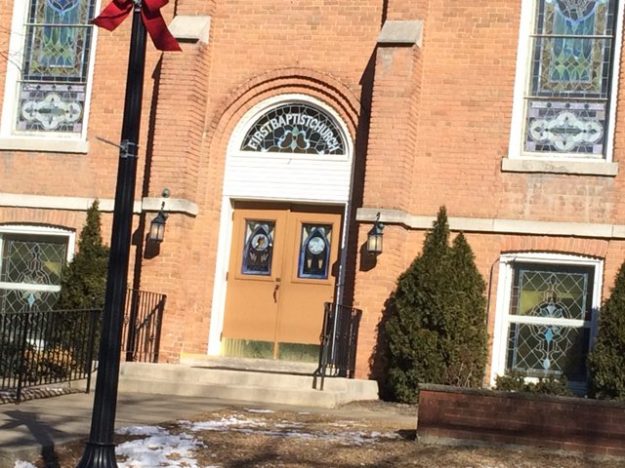 The original architects designed this structure to house the First Baptist Church. And this is evidently an entirely different institution from the ministry that currently occupies the building. Perhaps First Baptist Church moved elsewhere in the metro. But a search for “First Baptist Church” near Schenectady yields only one other result, to the east of downtown…and that church is closed. (Incidentally, a Street View of the other church building suggests that, between 2011 and 2016, First Baptist vacated those premises as well, and the new tenant is a gurdwara, or Sikh temple.)

Virtually all evidence suggests that First Baptist Church of Scotia departed the Schenectady area. Since churches typically serve their locality, and when a pastor leaves, the board of elders selects a replacement, the most obvious conclusion is that First Baptist closed down, both in Scotia and Schenectady. I’m not sure I’d have any way of knowing the precise denominational leanings of First Baptist, but I’d wager that it is American Baptist (ABCUSA), a Mainline Protestant affiliate that, like Presbyterian Church USA or Episcopal Church USA, has suffered stagnant or declining numbers nationally over the last few decades.

Meanwhile, the absence of a denominational reference in the new marquee suggests that City View Church exemplifies the contemporary Christian house of worship: no broader affiliation with a parent church, a softer (and vaguer) name, and a logo unique to that church itself. (Here’s the logo that most likely graced the front sign back when this was First Baptist Church.) The style of the City View logo bears a more than passing resemblance to a church I referenced last year in South Philadelphia—one that called a senior center home. And the naming strategy recalls a church out of a storefront in the main commercial street of Stroudsburg, PA that caught my attention a few years ago. All non-denominational.

The direction I’m heading is probably clear by now: First Baptist didn’t so much vacate the region; it closed altogether. Most likely its congregation dwindled to the point that it couldn’t support both weekly operations and the high costs of an old, drafty, oversized church—which no doubt also fall under operations. The remaining members at the point of closure probably joined neighboring Baptist churches, and the parent ABCUSA sold or leased the property to City View. But the shift from an old, nationwide institution to an “indie” remains surprising, when so many other young, non-denominational churches construct their own facilities in youthful exurban areas. Why did City View Church choose an old building?

First of all, the Village of Scotia, though old, hardly seems redolent of decline—unlike ABCUSA or the larger City of Schenectady nearby. 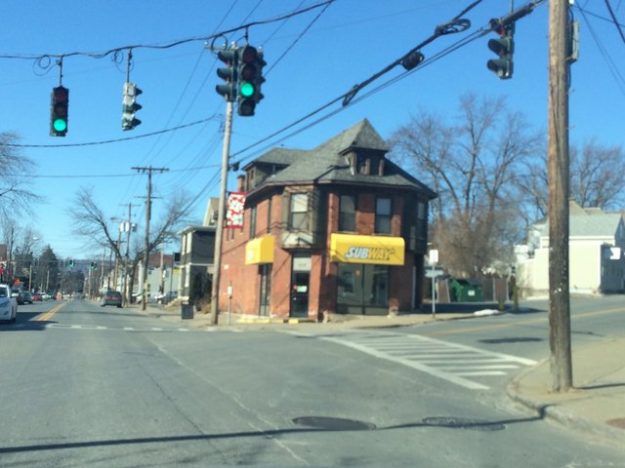 This pic is hardly a beauty, but Scotia reveals itself by and large as a successful, stable streetcar suburb—one that has remained between 7,000 and 8,000 people since the 1930 census, and a considerable contrast from Schenectady’s 30% loss over the years. Incomes in Scotia are on the north end of middle class; poverty is well within the single digits. While many similar suburbs have begun to struggle in tandem with their core city, Scotia remains desirable, most likely bolstered by a high-performing school district. Secondly, the leadership at City View Church recognized the merits to this handsome building, which, however old, remained in sufficiently good condition when the Baptist congregation departed. And most of this new generation of indie churches are brand savvy, from the graphic design to their website to the alignment of their names with the image they hope to convey—and their target audience for evangelization. Sure, the church planters could have chosen to build a corrugated tin box out in the exurbs, but that obviously diminishes the credibility of a name like “City View”, doesn’t it? At this locale, they clearly enjoy real estate on a classically urban main street, and from the church’s upper floors, one might actually get a city view of downtown Schenectady. Meanwhile, the strong standing of the Scotia-Glenville School District attracts couples of childbearing age, who might otherwise go to the exurbs, where the schools tend to have a uniformly positive reputation.

But the pic below probably captures best why City View shirked “church sprawl” and reclaimed an old building: 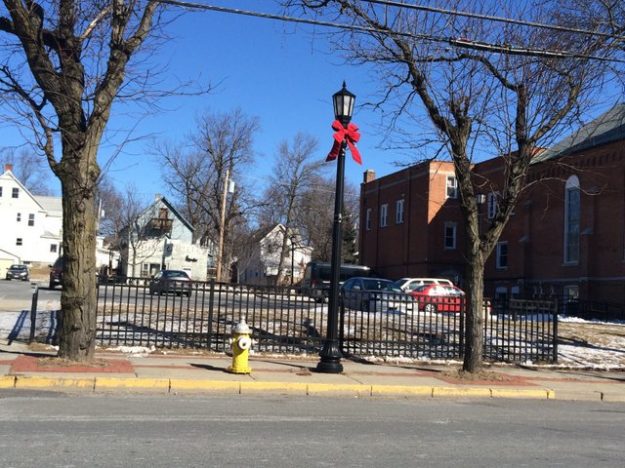 Easy off-street parking. Tons of it. A parking lot this big in a 1930s-era main street setting is a rarity…at least when the community remains economically healthy. A building may very well have stood at the site of this lot, which First Baptist bought and then demolished, but the fact remains that old, neighborhood driven church buildings often suffer diminishing value not because people hate the architecture—quite the opposite—but because the churches originally served a population that could walk each Sunday morning. Now they live up to 20 miles away, and easy parking comes at a premium. But the pursuit of parking is a double-edged sword for old, walkable towns, because it’s a tremendous waste of space to force a street corner into a dedicated strip of asphalt that only gets use a few hours on Sunday morning. Why not forge a sharing agreement with a neighboring commercial structure, especially since most other businesses are closed during the peak church usage? Well, it turns out City View Church doesn’t need that; the non-denominational congregation enjoys both convenience of on-street parking with the charm of an old-time main street. If it succeeds, I suspect City View Church could remain at this location for quite some time—unless they succeed too much. Then they’ll probably need a bigger facility—a megachurch outfit, built on a Greenfield in the exurbs. And with a parking lot the size of a football field.

PrevDepartment store downward spiral: at least the shelves are stocked.
Sprucing up those doggie domains.Next