The Great Recession and its undead discontents.

In the immediate years following the housing market’s catastrophic implosion, it was common to find half-finished suburban developments, where a handful of homes splayed out across a tangle of curvilinear streets. In most of these zombie subdivisions, the developer had already installed water/sewer, at least some of the paved roads, streetlights, road signs, maybe even the name of planned community. Some lots managed to get cleared and graded. But only a fragment of the homes got built before the project collapsed, leaving a smattering of lonely homeowners adrift among vacant, unsold lots that reverted back to nature. It was the closest that fast-growing Sunbelt metros like Charlotte and Jacksonville had ever experienced to something more closely resembling Detroit (minus Detroit’s stringent street grid).

In other instances, the subdivisions matured to near-completion, but the homeowners themselves went bust during construction. I covered an example of an eyesore in suburban Baton Rouge several years ago, surrounded by attractive, fully habited homes in a maturing upper-middle income community. No doubt the dormant domicile, patched by graying, decaying plywood, only served to detract from the values of the neighbors’ homes, much to their chagrin. A single zombie haunts everyone around it.

The lion’s share of these stymied structures stretch across suburbia, which, until the late 2000s, hosted the preponderance of new housing developments. So the zombie subdivision seems like a suburban phenomenon. But that’s not always the case. Now and then, we witness the equivalent in an urban setting. 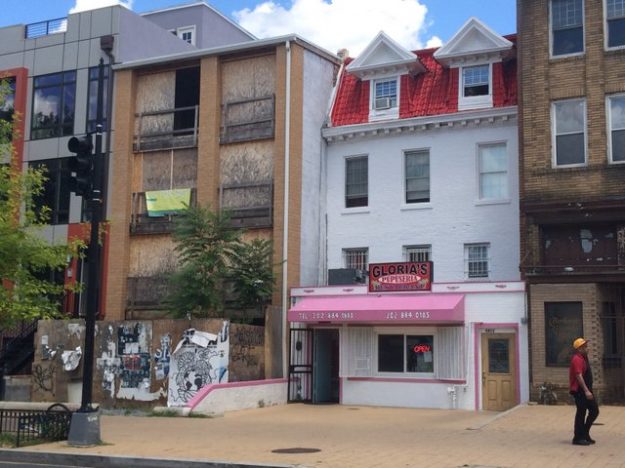 This one is in Washington DC, in the heart of the Columbia Heights neighborhood, just a block away from the featured intersection in my previous blog post. And it bears all the trappings of a stalled project from many years ago: weathered wood, stripped-away scaffolding, taggings of posters and assorted graffiti.

It’s been years since any construction advanced on this multi-family building. While the market forces that put the kibosh on this apartment are the same as that big single-family home in Baton Rouge, it’s much more surprising to encounter a zombie in an urban milieu, for two fundamental reasons. First, urban neighborhoods have benefitted from the healthiest recovery in the housing market since emerging from the 2009-10 recession, particularly in terms of home values. Meanwhile, despite steady population growth, suburban construction has only inched forward and, in most metropolitan markets, remains stuck at a fraction of the levels before the downturn. Secondly, during the recession, Washington DC stood virtually unchallenged as one of the healthiest, most economically confident markets in the country. By some metrics—like job retention and median home values—it was the only metro that never really faced recession-like conditions.

So why would we find a zombie development like this, particularly when Columbia Heights is a hot neighborhood by almost all other metrics? A quick scan of both the details and the surrounding context might shed some light. One of the first things that struck me as odd was the orange brickwork: 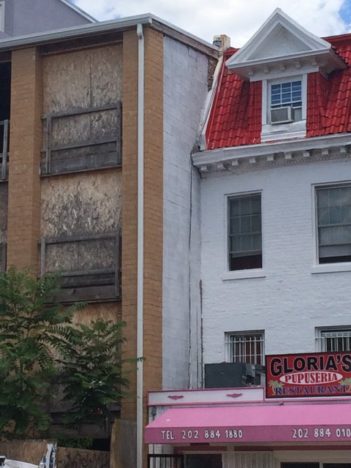 While I could be wrong in inferring that it has an aged look, I’m particularly taken by how strangely out-of-sequence it appears: as though the builder completed both the load-bearing walls and the outer masonry sheath. I’m hardly a construction expert, but why advance so much on the façade when so much plywood remains exposed?  Does this meet municipal building code standards?  Not even the flooring seems complete. It doesn’t quite come together. Additionally, the zombie clearly wasn’t the only urban infill project on the block: 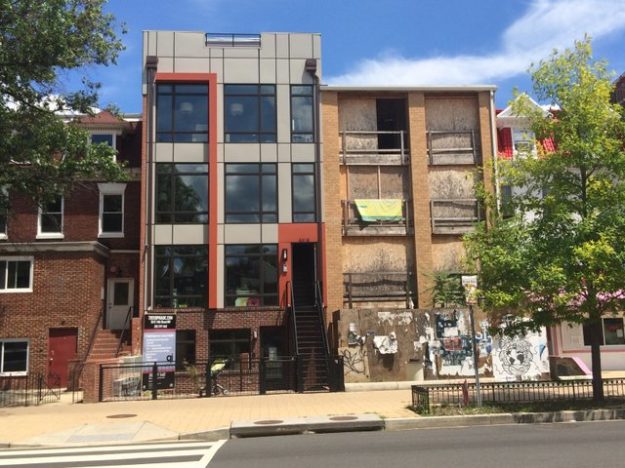 The four-story condo building to the left of the zombie began selling its units only recently. But these two are the outliers; everything else in the block is approximately a century old. 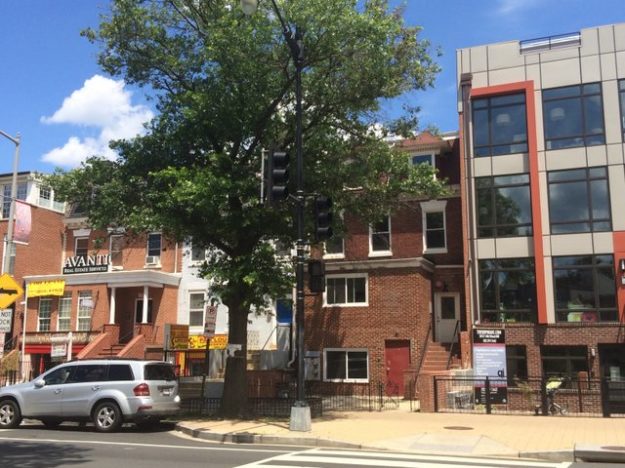 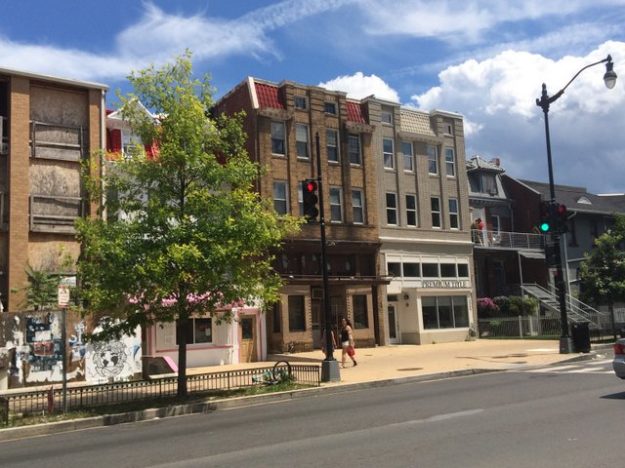 How could two parcels facing nearly identical market conditions reach such divergent outcomes? The best tool to aid my speculation is—per usual—Google Street View. In the summer of 2009, the throes of the recession, the two structures largely aligned with the vernacular of everything else around them.  Neither looked in great condition, and I suspect both were uninhabited (Columbia Heights was a rougher part of town in 2009), but certainly not in danger of eminent collapse. Yet by October 2011, both homes are completely unrecognizable: stripped to the basics as part of a complete redevelopment. But the building on the left, though nearly compete, offers a completely different appearance from the finished product in my photos above: instead of a contemporary façade with floor-to-ceiling windows, the building under construction at the time used much more conservative architectural details. And all brick. Meanwhile, it already appeared that the building to the right was stuck in a rut. Compare this to just a few months prior, in June 2011, and we get a slightly more telling image: the building on the right was in the process of deconstruction, removing the dormer windows, all those red decorative tiles, the entire façade.  With a dude on an extra-long ladder. The retro, orange masonry had not yet sheathed the concrete block supports.

My guess? A single developer bought both buildings in something akin to a sheriff’s sale during the early days of the recession with the intention of converting them to condos, right before the market collapsed. Then, in the midst of a very conservative (yet still ill-prepared) redevelopment plan around 2011, our developer went broke. Even though the building on the left neared completion, it sat and languished with a less sexy design. Eventually, as the market in Columbia Heights strengthened, another developer decided to cut his or her teeth, snatching up the structure on the left in 2014 or thereabouts. This new developer gave it a complete facelift in 2015, completely altering the fenestration and removing the masonry. But this he or she didn’t take such a shine to our zombie building next door, which probably suffered serious structural deficiencies, with so much of the interior left exposed to the elements after nearly five years.

And now we’ve got quite the odd couple. 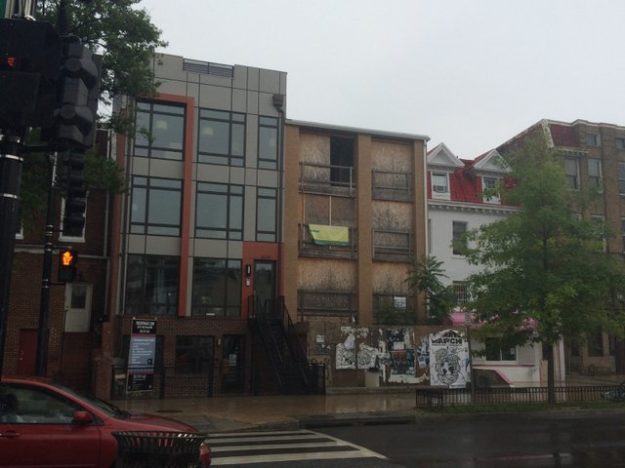 I could be way off base in my fabrication of a history for this pair. But the fact that the structure on the right continues to languish proves just how profoundly difficult it is to hit the market bull’s-eye when it comes to our protean tastes in housing. Clearly a Dr. Frankenstein (the “Dr.” stands for “developer”) could give the zombie another try, since the demand for housing in this trendy neighborhood remains sky-high. But site clearance is half the battle, and in this case, the redevelopment most likely will necessitate a complete demolition—an act that can prove disproportionately costly when the adjacent structure no longer abides by the same architectural principles or construction standards that birthed this row of housing. Both the left and right-hand buildings are taller than their century-old forebears. It may be hard to pass these additional demolition costs on to the next consumer, particularly in a neighborhood that genuinely seeks to preserve a core of moderately priced homes, along with its socioeconomic diversity.

In time, I’m confident someone will resurrect this monster, but it may take a few more fraught years before we witness any true results. Clearly even the strongest neighborhood in the country’s most economically resilient city must contend with a zombie or two—a consequence not just of the recession but the complacent bubble years that preceded it. Then again, maybe we should just ask Gloria, who runs the pupuseria to the right of the zombie. She’s remained the bedrock of the neighborhood for the last decade or so, selling her pupusas amidst the housing market’s various trials and tribulations. Betcha she probably has some zombie stories to tell.

8 thoughts on “The Great Recession and its undead discontents.”