The signs, sounds and flavahs of summah.

Like the other three seasons, summer impels us to gravitate toward certain foods. To some extent, growing seasons and the availability of certain types of produce influence our choices. But in the globalized era, when pineapple is available twelve months a year, the “harvest” (what a quaint word!) has less and less to do with what we pull off the supermarket shelves. It’s the weather, stupid—and the entire food-and-drink culture that emerges from seasonal patterns.

Take a look at this one: 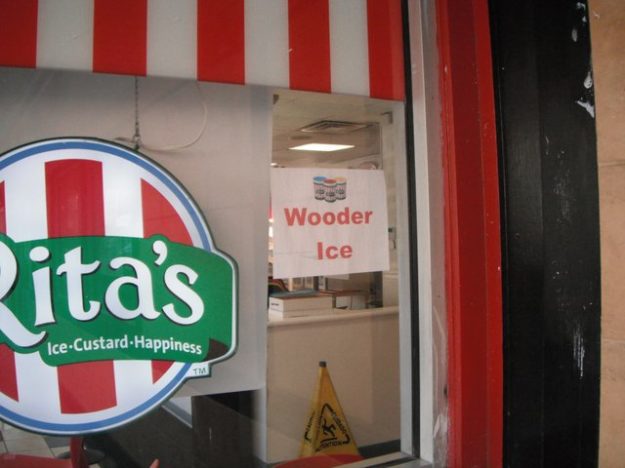 It’s the signature, summery frozen treat of the Philadelphia area—and much of the East Coast, for that matter—comes in the form of Italian ice, which I can best describe as a dryer, more chewable version of the slushies I grew up with in the Midwest. Individual cities have their variants, and in Philly they’re almost approaching a sorbet. (Rita’s is merely the best-known chain, originating from the Philly area but having spread throughout the mid-Atlantic…and now creeping into the Midwest.) I don’t know enough of the difference in the ingredients between a typical sorbet and an Italian ice, but Philly’s take on the dessert is typically a whole lot cheaper. Oh yeah, and they call it “water ice”—or, as this little sign indicates, “wooder ice”.

But what’s wooder? It’s a rhetorical question if you’ve ever lived within a 200-mile radius of the City of Brotherly Love. But few others are aware of it. Despite being only a two-hour drive from New York City (on a good day), Philadelphia’s accent is so different that it has fascinated linguists for about as long as it became clear that Philadelphia’s have their own way of pronouncing two parts hydrogen and one part oxygen. Beyond that, Philadelphians rhoticize heavily: unlike New Yorkers (and Bostonians..and my title to this blog article), they still articulate their Rs. They shift the vowels different; the male name Ian is likely to sound “Eh-ann”. My name is closer to “Urr-ic”. Even though Baltimore is a geographically greater distance, most linguists tie the two cities together as two variants of a unifying “mid-Atlantic” accent.

But the defining word of a Philadelphian—the Philly shibboleth—is “water”. It’s such an unusual pronunciation that I had a hard time imitating it during my first year or so living in the city. The initial short “a” sound gets so clipped between the “w” and “t” that it’s almost lost together. Even “wooder” isn’t really accurate, because the first syllable doesn’t remotely resemble “woo”. It’s really more like the U in “put” but often more rushed than that. And it’s rushed to the point that it almost becomes “w’ter”. Nonetheless, wooder is the best phonetic attempt to replicate the Philadelphians’ vocalization of their quintessential word. Everyone knows what this little storefront along East Passyunk Avenue is talking about from the sign—at least if you’re from Philly. And this vendor is clearly in on the joke, if it’s even a joking matter. (I’ve had Philadelphians correct me for my “wadder” brogue.)

PrevThe Great Recession and its undead discontents.
The dog park: more possibilities than you can shake a stick at.Next

4 thoughts on “The signs, sounds and flavahs of summah.”