Those of us who identify as urbanophilic—to which I include myself a great deal of the time—have long bemoaned the lack of density afflicting many of our American urban centers, which impedes these places from achieving not just the level of on-the-street liveliness heralded by Jane Jacobs—the first great autodidact urbanophile—but their basic capacity to deliver fundamental services to their municipal constituents. Needless to say, a low-density city has fewer people per square mile and, therefore, a smaller population spread over its jurisdiction, which, in turn, nearly always equates to a higher cost per person to provide the fundamentals: trash pick-up, mass transit, road resurfacing, adequate streetlights, park maintenance, et cetera. Consequently, the lowest density cities often suffer from the lowest capacity to provide good public services, because such services impose a far greater cost burden to a smaller population spread over a great land area. While many low-density cities can remain prosperous with weaker services while still satisfying their constituents’ modest expectations, their executives and legislators will find it much harder to change these conditions if the demand for services increases without a concomitant, hefty tax increase.

In short, cities should be dense—or, at the very least, denser than their purlieus. It’s not unreasonable, in fact, to assert that density is the most powerful, fundamental characteristic distinguishing urban areas. With few exceptions—Detroit comes to mind—even the lowest density metropolitan areas tend to have denser cores than the periphery.

Fortunately, in many larger and medium-sized American cities, the public sector’s recognition of the importance of high population density has collided with a renewed public taste for dense living. In other words, many cities that experienced long-term population declines through much of the 20th century have started to rebound, with most of this growth transpiring in the cities’ downtowns and the immediate surrounding neighborhoods. Places like Philadelphia, Washington DC, New Haven and Richmond have begun to reverse their staggering population losses, and, while in many cities the recovery remains relegated to a handful of old neighborhoods in or near the center, the return shows little sign of abating. And, as a result, in many respects, the sort of bustle we ascribe to cities during the early 1900s is starting to return, though obviously commingled with contemporary cadences, like cars.

But does density correlate to vitality—the streetscape activity that contributes significantly to urbanism’s allure? The visual evidence out there would suggest a measured answer: not necessarily. Just take a look at the Newport neighborhood in Jersey City: built on former rail yards in the 1980s, it offers one residential skyscraper after another, with a population density in the immediate area on par with much of Manhattan. But, as I blogged about a few years ago, the streets remain sleepy outside of select little bursts at the beginning and end of the work day. And on the weekends, Newport is a high-rise cemetery. No pedestrians or life at the street level, despite thousands of people living in the rarefied space above us.

The same could be said for many neighborhoods in Arlington County, Virginia, which claims a similar spillover function to Washington DC, comparable to Jersey City’s proximity to New York City. Crystal City, the neighborhood of Arlington immediately south of the Interstate 395 bridge into Washington DC (and just south of The Pentagon), has hosted office and residential high-rises for decades, thanks to its strategic location, and their presence continues to grow, no doubt amplified by the insatiable public demand for rental units in this intensely transient metropolitan area. U.S. Route 1 serves as the arterial for Crystal City, and, for over a mile, the general landscape looks consistently like this snapshot provided by Google Street View.  Tall buildings everywhere. And the apartments and condos keep coming, sprouting southward and key points along Route 1 and Virginia’s WMATA (Metro subway) stops, granting the residents of these goliaths unprecedented access to the heart of the Washington central business district and the National Mall. In more recent years, the high-intensity development has continued into Potomac Yard, the next neighborhood south of Crystal City, for which Route 1 also serves as its spine.

But high density and mixed use do not guarantee a thriving streetscape, as proven by a fairly new edifice near the boundary between Crystal City and Potomac Yard. 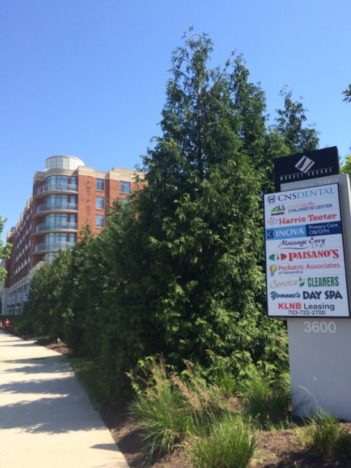 The featured building stands to the left/background in the photo above, while the sign on the right advertises all the retail offerings that occupy it. In an area with lower real estate values, everything captured on that sign would probably constitute a large strip mall, offset from the highway by an expansive parking lot. You know the look: completely unfriendly to pedestrians. But in Crystal City/Potomac Yard, the stores rest underneath at least five stories of residences, and an underground garage hosts all the parking. Among these many shops, the grocery store Harris Teeter serves as the anchor tenant.

A superficial survey of Market Square at Potomac Yard would suggest it abides by all the typologies of an urban edifice. It offers density, a mix of uses, carefully shielded underground parking, and even some attractive, landscaped exterior plazas. 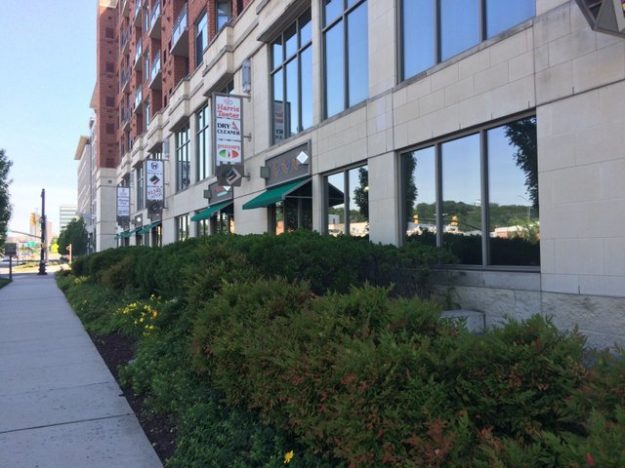 But where are all the people? I took these photos at close to noon on a Saturday, so no one can blame the deserted character on bad timing. It was a beautiful June day. Lots of people shop for groceries on Saturday, so Harris Teeter should have throngs of pedestrians milling about the entrance, right? A stroll around the perimeter of this building reveals the problem. 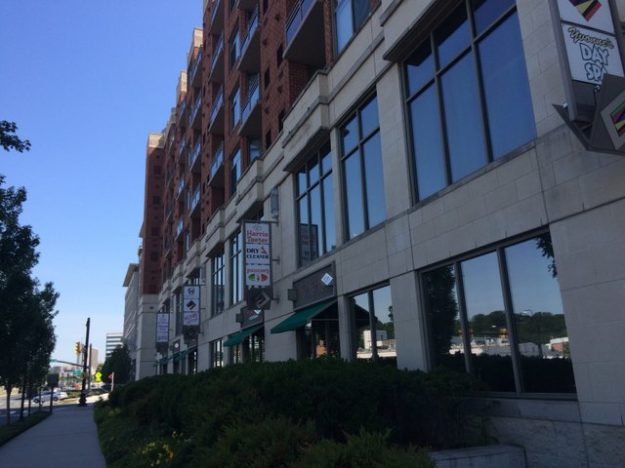 To the right in the photo above is the side of the building directly facing U.S. Route 1, the highway from which Harris Teeter would get most of its visibility from passers-by. It’s a surging six- and eight-lane arterial, engineered for vehicles to move at speeds uncharacteristic to an urban environment. So that’s part of the problem. But the density of housing doesn’t seem to spill out onto the sidewalks either. Let’s take a look at the opposite side of the street. 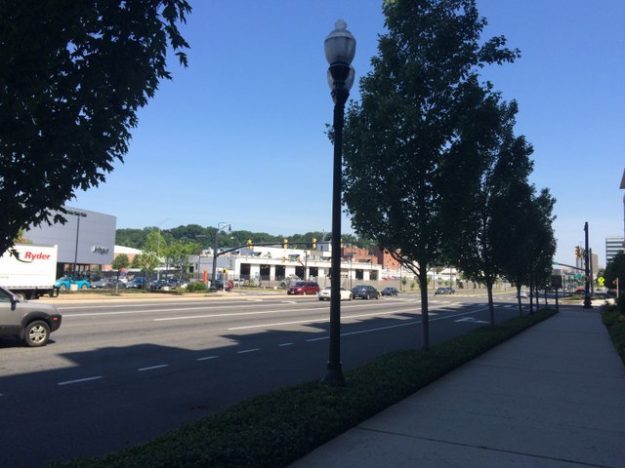 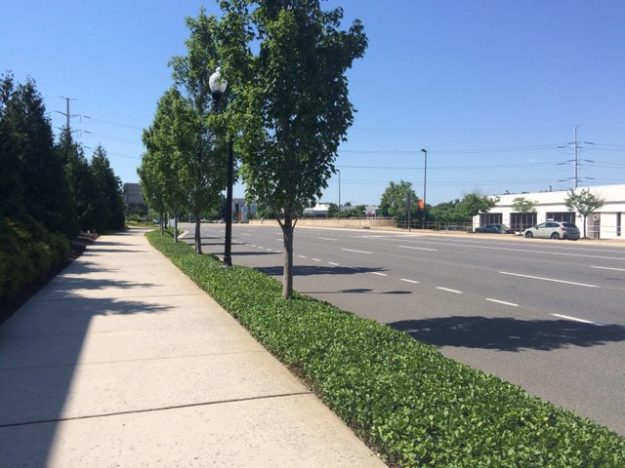 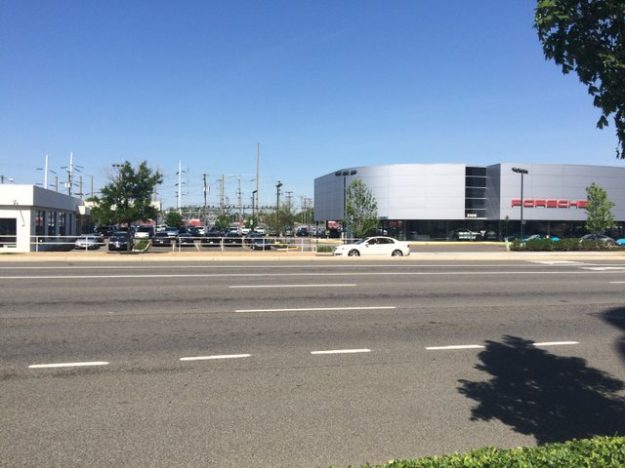 Nothing but car dealerships. While other portions of Crystal City benefit from high-density buildings on both sides of Route 1, down here near Potomac Yard, real estate pressures have not yet scared away all the low-intensity uses. (I suspect that, thirty years ago, the majority of Route 1 hosted dealerships. Granted, the dealership in question is Porsche, so it speaks favorably of the income density in Arlington County.)

Thus far, Market Square at Potomac Yard only benefits from population density on one side of the street—a street that doesn’t encourage pedestrianism in most respects, beyond the presence of a sidewalk. But could pedestrians walk up to the Harris Teeter if they wanted to? Let’s return to the building’s perimeter. 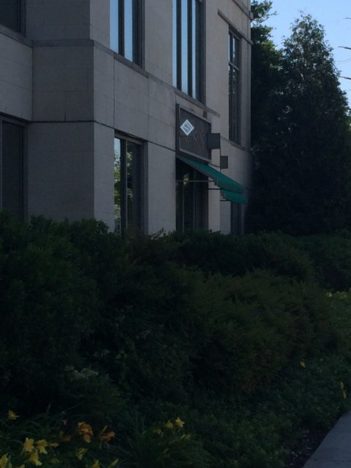 Those green awnings with the Harris Teeter logo directly above would typically offer visual cues to an entrance. But, so far, nothing. 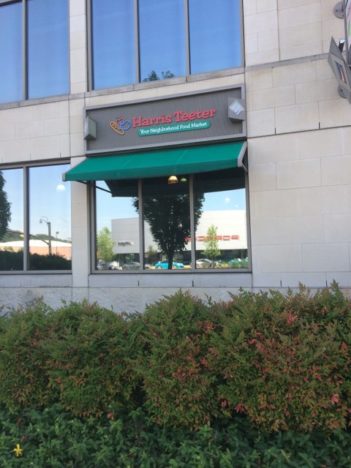 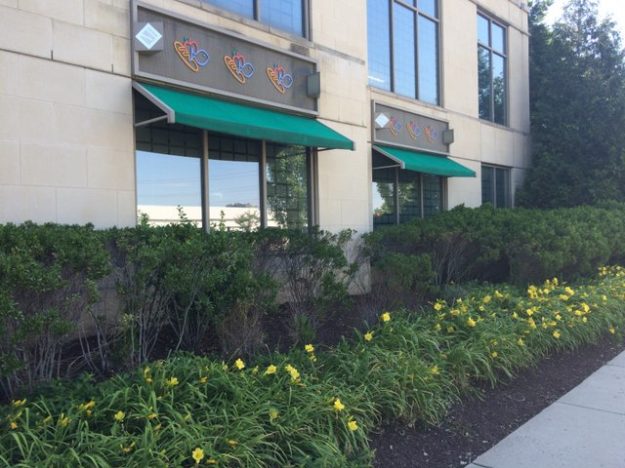 The awnings are a ruse—nothing more than a decorative feature to instill warmth and three-dimensionality to a flat façade. They offer shade to shrubbery. Not useful at all. So, are there any openings on the side of the building facing the highway? Nope—just an employee entrance, or a fire exit. 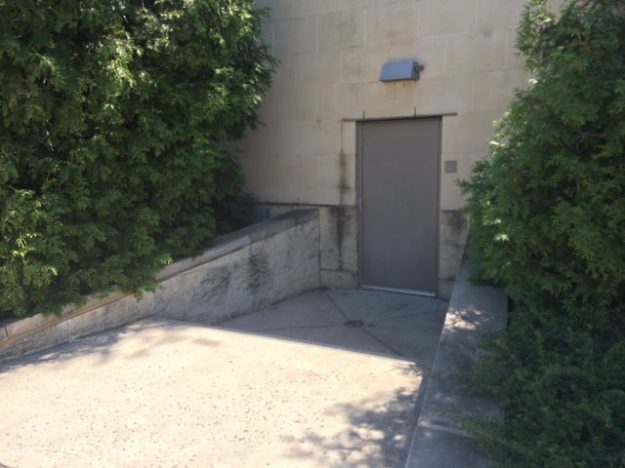 At the corner of the building, we encounter a desire trail up a modest slope to the back of the development, where a courtyard cleaves Market Square into two nearly identical buildings. 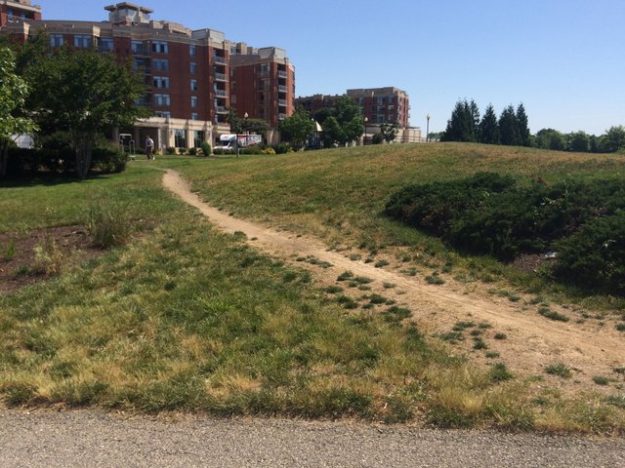 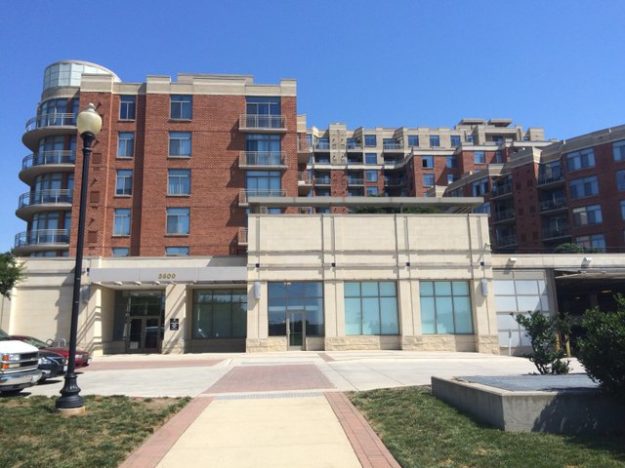 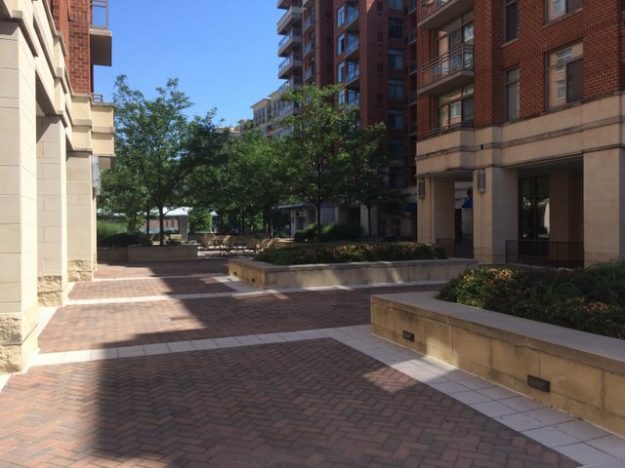 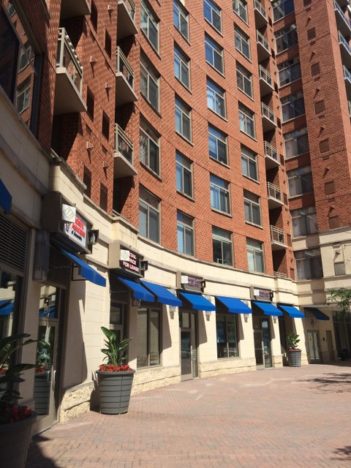 At the courtyard, we see the entrances to some of the other commercial offerings, but still nothing for the Harris Teeter. Finally, pivoting around the corner to the final side, AT LAST there’s an entrance… 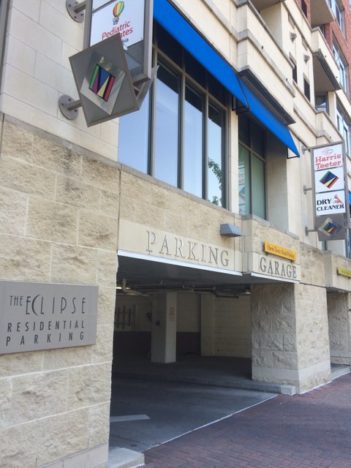 …an entrance to the parking garage. This is how you have to get in to the development to access the grocery store. 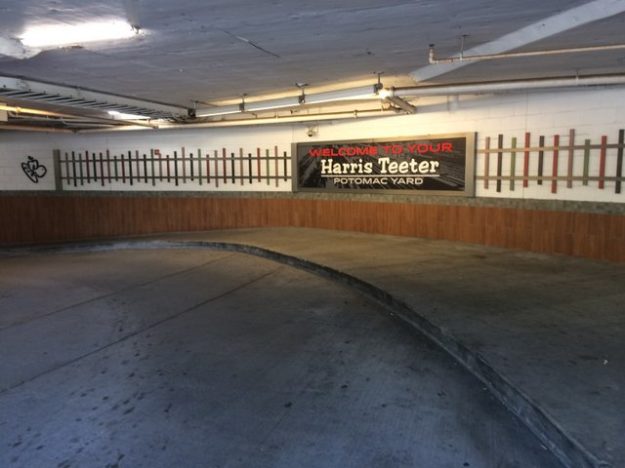 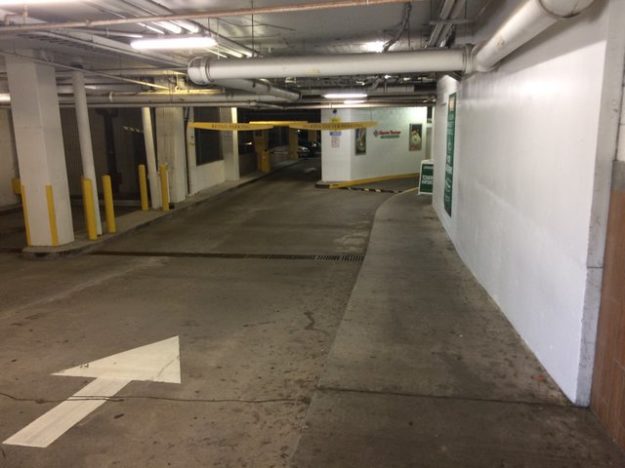 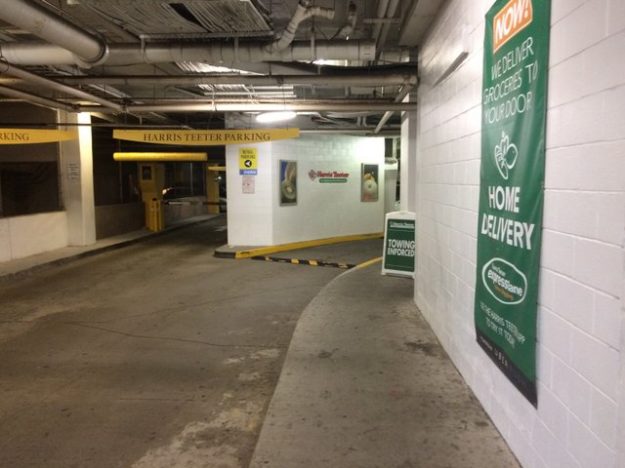 At least there’s a sidewalk adjacent to the vehicular ramp leading toward the ticket gate. And finally, turning the corner, we encounter the Harris Teeter entrance. 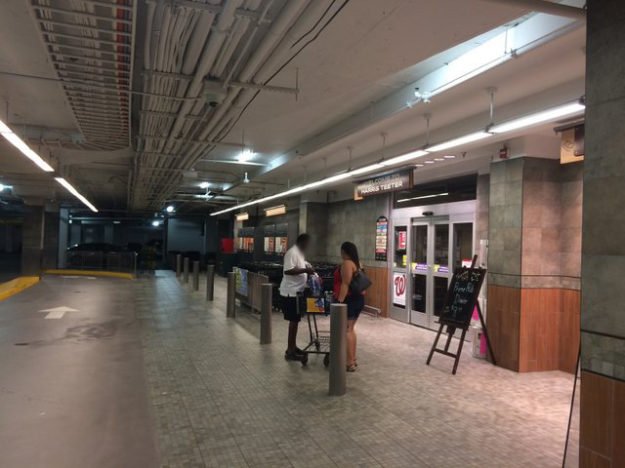 But there you have it: the only way for a pedestrian to enter the Harris Teeter is via the ramp in the parking garage. Not a single door from the outside.

It appears the developers recognized three common characteristics to human behavior, manifest through their design of Market Square at Potomac Yard. Number 1: people don’t walk to grocery stores if they can help it; most shop with full hands, and, outside of old ladies in Manhattan, the appeal of wheeling around a mesh grocery cart has proven quite limited. Number 2: the real source of the density to the area—the residences above—will only need to hop on an elevator to get to their Harris Teeter. No front door needed. Number 3: Crystal City and Potomac Yard are only facsimiles of urbanism in terms of persons per square mile. From an urban design perspective, the scale of the streetscapes, the positioning of the buildings, the flow of traffic along the streets—none of it really duplicates the walkable feel of a commercial strip, like the U Street corridor in Washington DC, and certainly not anything we’d encounter in Manhattan, Boston or even Baltimore.

The lesson this teaches us urbanophiles—again—is that density, though a sine qua non to thriving urban landscapes, isn’t the only ingredient. And it’s certainly not the ingredient that requires the most care and cultivation. Getting high density is relatively easy, pending zoning regulations and general community approvals (the latter of which can prove to be a real beast). The sensitive, nuanced arrangement of windows, entrances, plazas, parking ramps, and even awnings is something much trickier—something that neither the real estate developers nor the team at The Kroger Company (the grocery conglomerate that owns Harris Teeter) really considered, not necessarily out of hostility to pedestrians, but because they knew it wouldn’t matter in the long run…at least not in this part of Arlington County.

Crystal City is a concatenation of mega-structures along a superhighway, not that different from most of the urbanism in Dubai, another city of countless skyscrapers but barely any real street life. It’s Virginia’s answer to Newport in Jersey City. So it’s dense, it’s fueled by transit, it’s close to a city center, and its inhabitants can walk to most of the shopping they’d need. But urban it ain’t. Well, you can’t win them all. At least the city of Washington DC has its share of mega-structures with grocery stores at the street level. And in our nation’s capital, you can walk right in the front door from the sidewalk.