If we’re seriously looking—and you know I am—rarely a day goes by where we can’t spot some new sign of desperation in the retail sector. We can visit the stores themselves, and witness not just the deep sales (“By one dress shirt! Get another for a Penney!”). In the most incorrigibly floundering businesses, the thin distribution of merchandise on the shelves.  Or maybe they just dim the lights to save on power.

In keeping with the all-too-frequent ethos of this blog, the most banal observations often prove the most profound…sometimes even cataclysmic. Take this one, for instance: 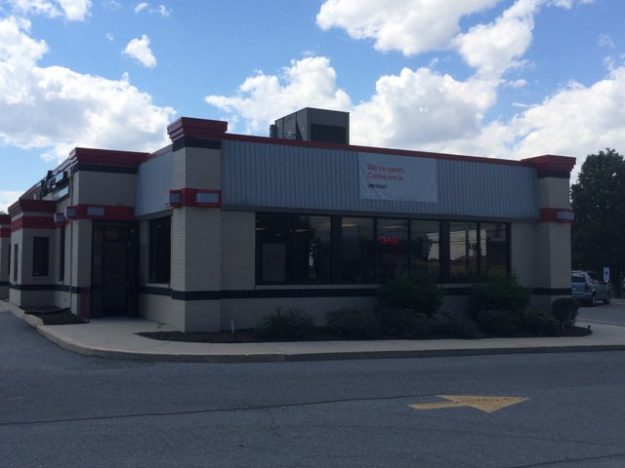 In the unremarkable outskirts of Lancaster, Pennsylvania, we witness a nondescript standalone storefront, currently hosting a Verizon Authorized Reseller. The white banner out front suggests that it’s new to this location. The lettering directly facing the closest arterial road is a bit more visible. 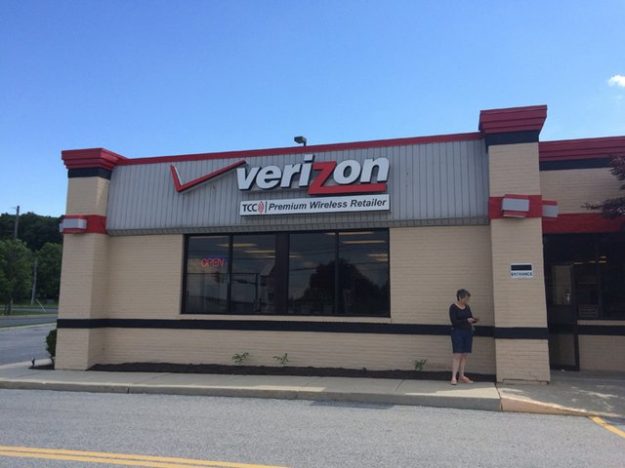 Anything odd about this location? Well, it’s an outparcel in a larger shopping center—atypical for a Verizon. Verizon usually chooses strip malls, or in-line spaces within a bigger mall, which is exactly what would have happened if it were a Verizon store. Verizon Authorized Resellers, on the other hand, operate much more like restaurant franchises, locating wherever the reseller chooses, with little consideration for a target market, income density or general demographics.  But here’s the real clincher: 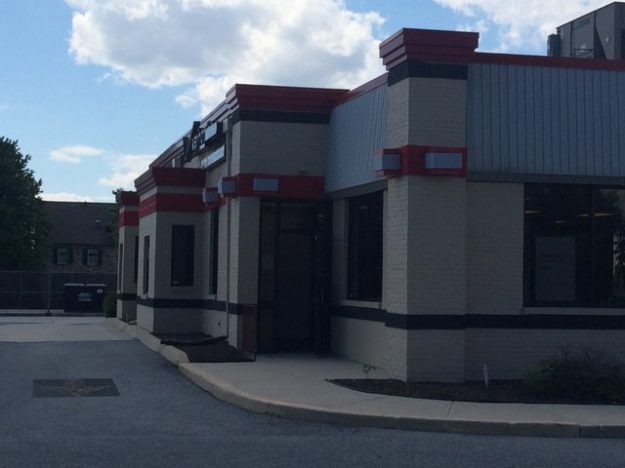 Those two windows on the side are the drive-thru, which is probably one of the biggest reasons this Verizon outlet seems like such an oddity.

Since when did Verizon need the features of a drive-thru? It hasn’t, and it doesn’t. Sure, the devil’s advocate might rebut, “Maybe Verizon is testing out some new feature that actually can take advantage of a drive-thru window.” To which I’d respond, “Not likely. They’ve removed most of the drive-thru infrastructure.” The walkie-talkie apparatus on the opposite side of the building—where you’d order the curly fries with extra horsey sauce—is missing. 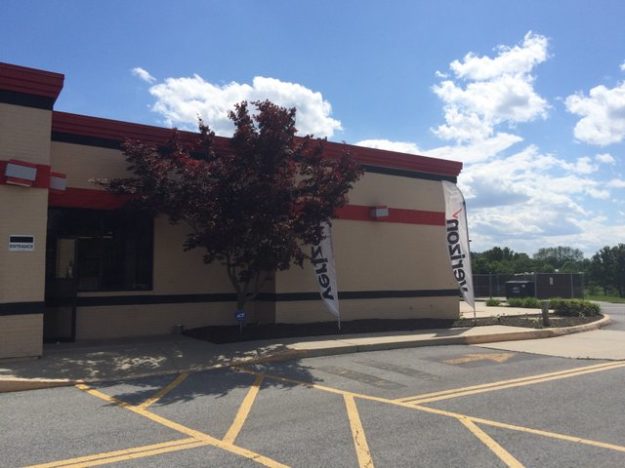 What does this mean? Perhaps not much. The owner of the building lost the previous tenant (my bet—obviously—is that it was an Arby’s) and needed a new one. But why couldn’t the landlord find another tenant who would take advantage of a drive-thru window? Why not a Burger King or Wendy’s? Surely some franchise owner would look at this building and see dollar signs. Starbucks, operating on a purely corporate-led expansion plan, seems to prefer to construct its own facilities, at least when it involves a drive-thru in an outparcel. Any other possibilities? Is the income density in the surrounding area too weak for a Chipotle or Panera?

I could be missing out on a subtle reason why the property manager forged an agreement with Verizon. In these turbulent times, perhaps even restaurants seem risky, while something as overwhelmingly service-oriented as a Verizon Wireless store may appear to be the safest bet for a stable long-term lease with a tenant who will always pay on time. Who knows? But the visual evidence of this lease means one clear condition failed: what should have been this structure’s signature amenity has lost all its meaning. The drive-thru window was not a selling point.

Observations like this one in Lancaster may carry weight in more urban settings, where developers still routinely argue for a drive-thru feature in the first-floor retail of their newly proposed apartment building, even though the urban setting should promote walkability rather than a suburban, auto-oriented feature like a drive-thru. They like drive-thrus because the tenants like them. And they want to secure tenants. This phenomenon particularly evokes a situation in my home city of Indianapolis, where a developer proposing 400 more residential units downtown is happy to add retail…as long as it can include a CVS…with a drive-thru window. The city’s Department of Metropolitan Development balked at this proposal, since zoning within the regional center prohibits drive-thru windows and service lanes. But the Commission nonetheless approved a variance for a drive-thru, fearing that the developer may pull out of the proposal altogether if the City throws too many roadblocks.

But is a drive-thru even a slam-dunk? Are the drive-thru features so attractive that, should the CVS terminate its lease, the property managers will easily find a replacement tenant to capitalize on those windows? The Verizon situation in Lancaster suggests otherwise. And, if the next tenant to take the spot is a yoga studio or a salon, the auto-oriented infrastructure will serve no purpose. Bearing this in mind, the Metropolitan Development Commission could have said, “No, you don’t need a drive-thru. They aren’t the golden goose they once were.” Then again, the Indianapolis developer might retort, “Retail is so, so bad right now that if you can’t let us put a drive thru window in our first-floor storefront, we may have to abandon retail altogether to make the financials work.”

All speculation, of course. Regardless, it seems clear we’re a bunch of frogs in the kettle right now, and the rising temperature is analogous to the uncertainty of retail amidst this momentous technological change. With online ordering for food, it’s dubious how much longer we’ll need any drive thru. For that matter, how much longer is an outfit like Verizon even going to need bricks and mortar? (A decade ago, the frogs in the kettles were Sears and J.C. Penney. Now look where they are.) Most of the services these outlets provide are equally available online…and it could even be Verizon wifi (Fios) powering the online operations. Our froggy entrepreneurs might systematically jump out of all the nation’s kettles in the years ahead.

PrevSubsidization and its discontents.
Full skyscrapers, looming over empty streets.Next